With very little on-street signage, this restaurant is as understated as it is under-rated.

This is not your first look at Nishiki. This may not even be your first introduction to head chef, Yass Tanase.

Since 1999 Yass has been part of Adelaide’s Japanese food scene, his memory of the industry reaching back far enough to recall working at Genki and watching with bewilderment as a customer sat with their sushi roll and removed the nori, thinking it was just decorative wrapping.

Since then, Japanese cuisine in Adelaide has come a long way.

The owner of Genki, Shozo Ikeda, added Himeji to his roster of restaurants in 2015 (another kitchen Yass has graced); Kenji on Hutt Street closed its doors, but the space was quickly filled by former Ichitaro head chef, Nobuki Hayashi who set up new restaurant  Nagomi with the help of friend, Akira Takahashi; and as you may have noticed, there’s a new yakitori place just opened in the city, sparking a trend siren in the CBD that has been ringing for years on Melbourne Street.

As the hype around Japanese food progresses from simmer, to boil, to just about bubbling over, quietly and without fanfare Yass sold out of En on Goodwood Road and moved into the city. 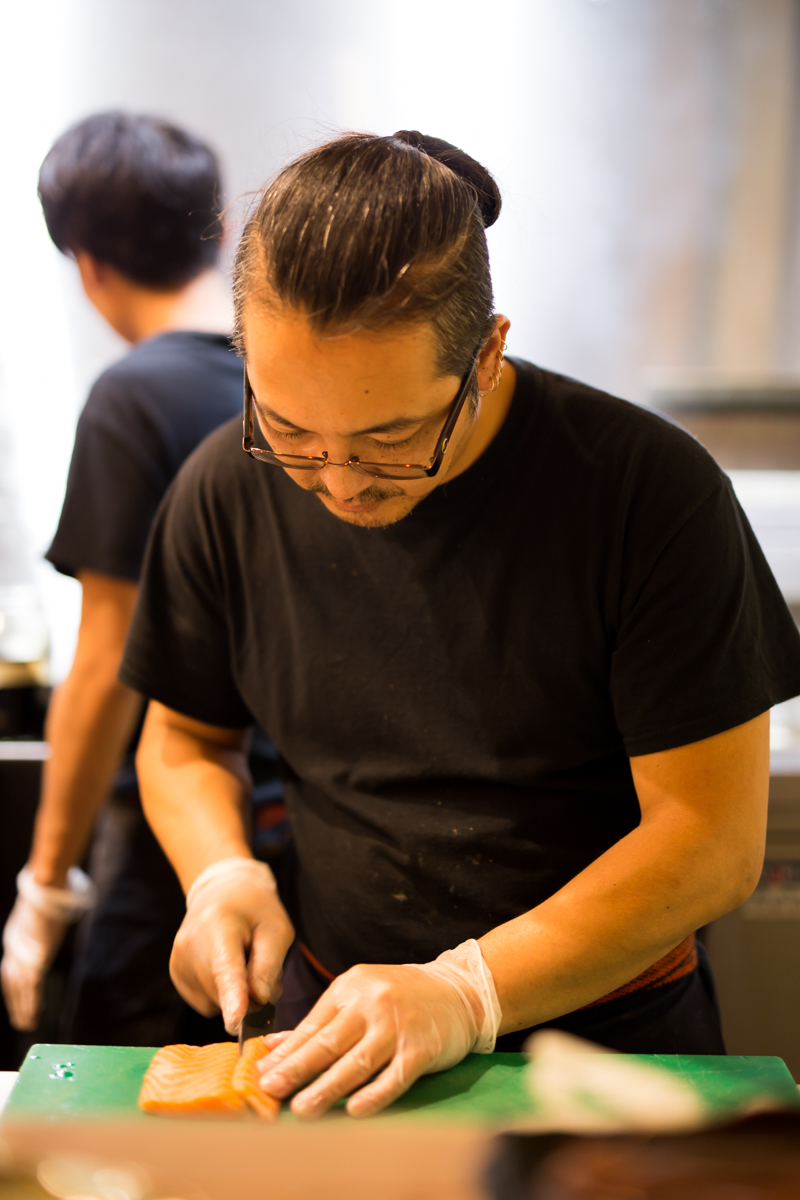 His restaurant – Nishiki – has yakitori, it has charcoal, sashimi, sake, bar dining, an open kitchen, and a chef with clout – everything that makes for an exciting Coming Soon article – but for over a month now Nishiki has been trading under the radar.

As a space, it’s easy to overlook; the restaurant’s entire on-street presence currently consists of a small A-frame sign. But once the kitchen is fired up and the charcoal is burning, scent alone is enough to lead you into the building.

It’s probably not a deliberate marketing ploy, but as we sit at the bar and talk with Yass, it’s noticeable that most people joining us in the dining area seem to have wandered in led by their noses, wearing a look on their face as though they’d found the izakaya by pushing through the back of a wardrobe.

What they’d stumbled upon was very good food prepared by a very good chef – the culmination of 18 years working in Japanese kitchens around Adelaide. But that’s only the beginning of the offering.

Nishiki, and izakayas generally, are as much about the style of service as they are about the food.

CityMag sits and talks with Yass as our food is prepared right in front of us. A large chunk of salmon is brought from the refrigerator and is sliced carefully and plated, as Yass tells us that because Nishiki is an izakaya, he could be serving spaghetti, so long as the restaurant feels comfortable and casual.

Undoubtedly, it does fall that way, even without spaghetti.

At 7:30pm we leave Nishiki full and satisfied. At 9:00pm, after returning home and raving about what we’d eaten, we return for another round – late night dining being another great izakaya trait.

Right now, Nishiki is an under-rated experience in the most-hyped cuisine, but we doubt it will stay this way for long.