Kickback at Kuitpo’s annual celebration of food, wine and community

For the last few decades, wine has been made and distributed from Kuitpo wineries and entered into market quietly under the guise of the Adelaide Hills – the sub-region’s parent locale.

As interest in emerging Adelaide wine regions intensifies – particularly in the Adelaide Hills – Kuitpo’s producers have made the most of the hype emanating from their northernmost Hills siblings in the Range, and have worked to court more and more tourists into their pine-laden landscape.

This has taken a concerted and collective effort from each of the sub-region’s producers, who up until recently were perfectly good neighbours but not much of a community.

In our conversations with Kuitpo producers over the last year or so, we’ve often asked where they each give credit for this coming together. Many pointed us toward Jade Seskis at Kuitpo Hall.

Jade has led a long career in events and currently runs MASE Agency. She’s put together activations for the Port Adelaide Football Club, has worked for Falls Festival and Splendour in the Grass, and still works with A Day on the Green.

A Willunga local, in 2015 Jade was on the lookout for a storage space for the many bits, bobs, accoutrements and pieces of equipment that come with running an events agency, and she came across the Kuitpo Hall.

Founded in 1926 as a community-owned building, the hall had reached a particularly derelict state as it approached its 90th year, and in 2015 was looking for its first private buyer.

Jade scouted the space and after researching the hall’s history she decided a lot of good could come from bringing it back from the brink, and so she put in an offer.

“I actually wrote a letter to the real estate agent and was like, My intention is to keep it as a hall, blah, blah, blah,” Jade recalls.

“I know there were at least two people who offered [way] more than me, but they were going to knock it down or turn it into a house or something. And because I was a local, I was going to keep it as a hall – I got it, which was pretty cool.” 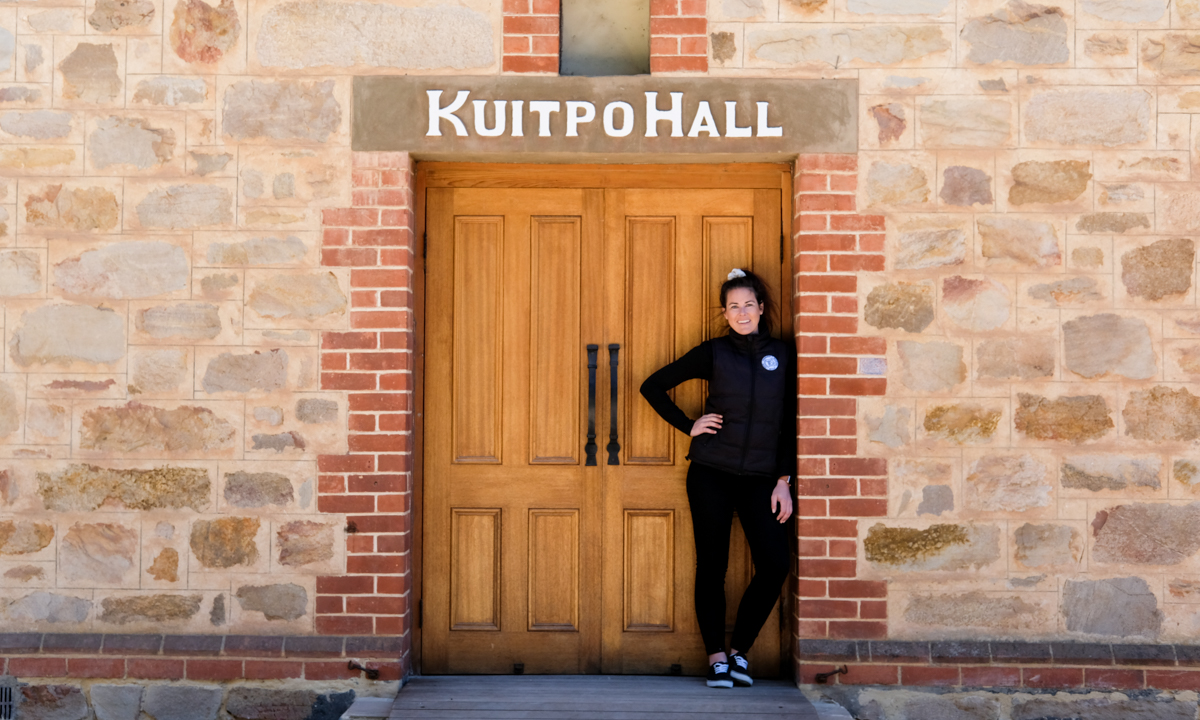 Jade became the owner on Christmas Eve 2015 and extensive renovations started shortly after.

Weddings have become the main fare for the hall, but despite Jade being its first private owner, she’s worked to bring it back to its central position in the Kuitpo community.

She offers the hall to local community groups for free – “If you want to do a yoga class, ping pong, karate class, you can hire the hall for free” – and she has made the hall a central meeting point for Kuitpo’s wineries with her Kickback at Kuitpo events.

Kickback at Kuitpo is a free-entry, BYO event with food trucks, music and all of the Kuitpo’s wine producers in attendance selling their wine direct to the public. The first was held in 2017 and was the official launch party for the Hall. It attracted around 250 people, and from that gathering came the concept of the Kuitpo Kollective: at last count, 15 Kuitpo producers who now hold events together.

The third edition of Kickback at Kuitpo is happening this month, on Sunday, 27 October, and will feature pizza from Adelaide Woodfired Pizza, music from The Saucermen and Nikko and Snooks, and wines available for purchase from the Kuitpo Kollective.

The event has double in size since its inception, but Jade maintains that Kickback at Kuitpo will always be free to attend and BYO.

“It’s meant to be a free day out. If a family wants to have a free day out, you don’t need to spend a cent. So by keeping it BYO allows them to do that,” Jade says.

“But me, I don’t like to carry an Esky, I would just buy it, it’s easier, so then that option is there as well [and] you can taste the local wines.”

Through her work at the hall, Jade is dedicated to returning the goodwill and welcome she’s received from the Kuitpo locals.

“I’ve had the original cutlery set that was in this hall given to me, I’ve had trees that were once planted here and ended up on someone else’s property given to me. It’s amazing. People want to keep the history here, and I want to preserve it as well,” she says.

“People have been here and been like, ‘Do you want me to cut branches off these trees and help with a working bee?’ They didn’t need to do that. So all I can really offer is this space.”

The 2019 edition of Kickback at Kuitpo will also see the launch of Kuitpo Brewing Co –Kuitpo’s first brewery and a partnership between Jade and Golden Child Wine’s James Hamilton.

The brewery is starting with a collaboration brew, described as being hop-forward and on the heavier end of a session ale, made alongside South Coast Brewing. It is Jade and James’ intention to produce a range of collaboration beers with breweries from throughout the Fleurieu.

If all goes according to plan, Kuitpo Hall could one day also host the brewery, “maybe when weddings aren’t popular anymore,” Jade laughs.

“I think [having a brewery here] would be a great long-term plan, and still working with lots of the other breweries, whether they come in and want to head up a particular beer or something,” she says.

“But it would be great if we could do as much as we can do onsite, use as much local produce as we can.”

Be among the first to taste the new Kuitpo Brewing Co Ale, and mix amongst the local wine producers at Kickback at Kuitpo on Sunday, 27 October. For more information, see the event page.