With 10 per cent fresh passionfruit juice in every batch, this sour and salty German-style beer is a perfect summer throwback.

Though it is far from the truth there is something seemingly healthy about drinking a gose.

Just like downing a 6ooml bottle of sugar water (whichever of the -ades is your post-sport rehydration preference), the gose, despite being no less a beer than any other, just feels right after a run.

The Wheaty
39 George Street, Thebarton 5031
Wed—Sun: 2pm ’til 6pm
Wheaty Brewing Corps beer is available to take home in crowler format.
Preorder: orders@wheatsheafhotel.com.au
For optimal experience, the Wheaty recommends drinking the beer within a few days of it being canned.

Founder of Wheaty Brewing Corps, Jade Flavell, sees where we’re coming from, even if she doesn’t exactly agree.

“A lot of those German styles, Berliner weisse and gose, they’re light, they’re refreshing, but the salt almost gives it a sports drink kind of character to it, a strangely savoury, refreshing character,” she says.

“And certainly on a hot day, I often find something like a gose far more refreshing than a big goopy IPA or a pale, or even a thick, fruity, sweet sour.”

The beer we’re speaking about today is the Wheaty’s Can Can passionfruit gose. The brewery has had it on rotation for about a year, and Jade says it is their most accessible sour.

“Some of the other sours, including the Black Lime Gose, is a bit more confronting,” she says.

“It’s got black lime tea in it, which has got that fusty, musty, earthy character to it, which you either love or hate, and it’s salty, and it’s also got a tartness from the kettle souring, and it’s bone dry, and it can be pretty intense.”

Can Can is a sweeter rendition, due to the passionfruit juice being added after fermentation. The beer will then be “crash cooled,” carbonated and kegged, with the ABV sitting between 4.5%—5% depending on the batch. 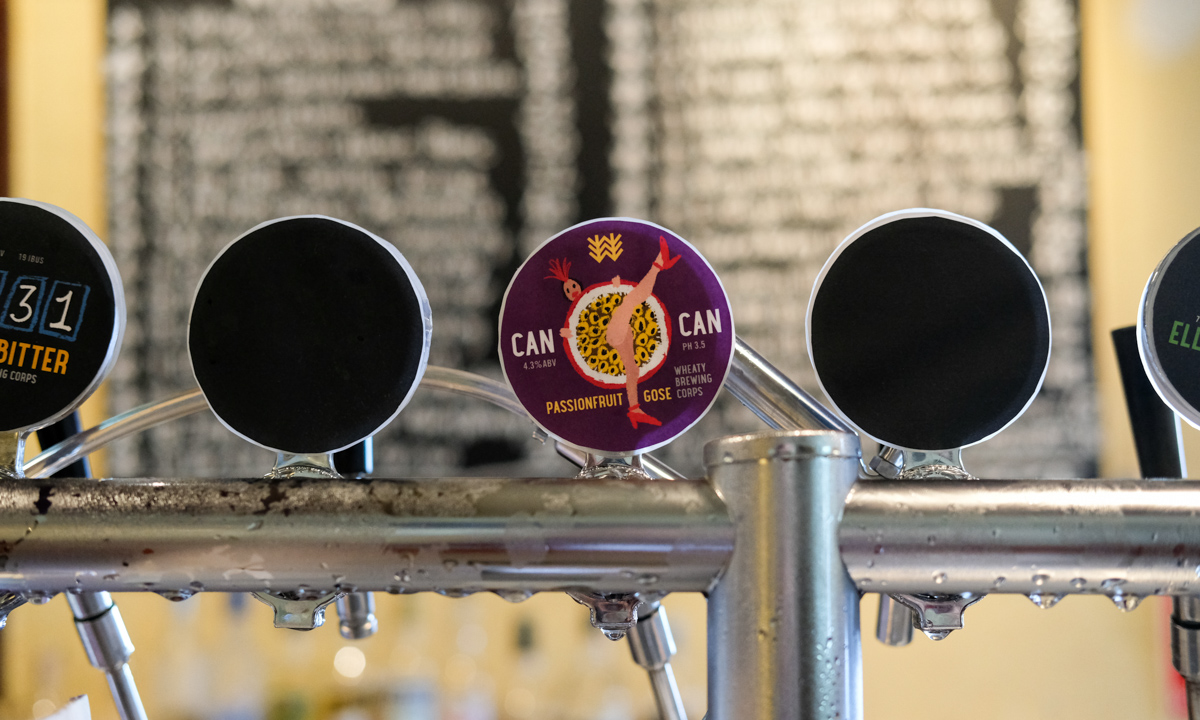 “I think there are quite a few people who previously didn’t like sours, or didn’t drink sours, or didn’t think they liked sours, and then tried the Can Can and have gone, ‘Actually, this is pretty good,’” Jade says.

“It’s not mouth-puckeringly sour, it’s still got balance and subtlety. It’s complex, there’s a lot going on with the salt and coriander and then a little bit of passionfruit, but then it’s also not too heavy-going.

“It’s something you don’t have to think about too much.”

The beer will also change throughout the course of its life in keg.

“Because it’s a mixed culture ferment that’s still kicking, and a lot of that mixed culture is saison, which never stops, every week it’s slightly different,” Jade says.

“That is one of the exciting things about it, is it’s alive. It’s not like you brew, you cook it, pasteurise it, and that’s it; the flavour profile is locked in. It’s something that continues to evolve, because it’s alive.”

While the weather is certainly turning more and more towards the upcoming winter, we’ll jump at any chance to reminisce on the brighter days of (pre-COVID) summer.

Wheaty Brewing Corps’ sweet and tart Can Can passionfruit gose is a mouth-watering way to do just that.