As one of the best-selling luxury car brands in the world, Audi’s four interlocking rings have been a symbol of luxury, safety and reliability since the turn of the 20th century. 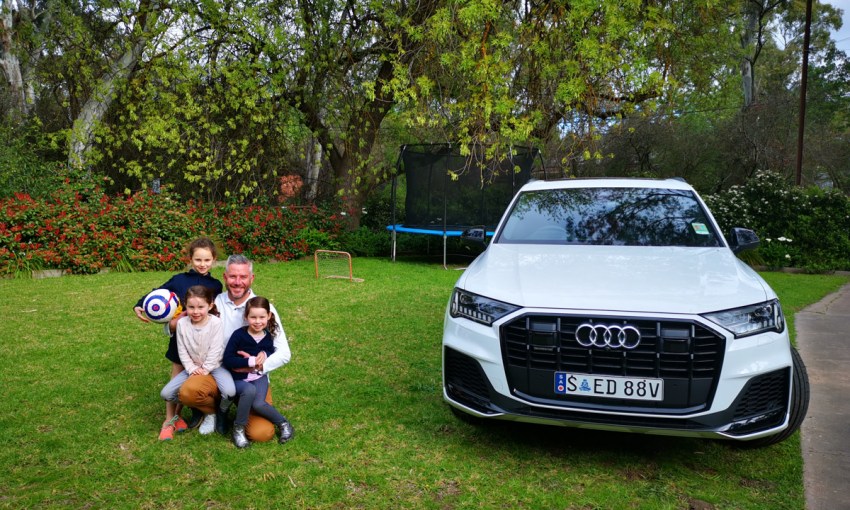 Starting with the Horch in 1907, then progressing to the DKW Monza in the 1950s and the Quattro of the 1980s, Audi has been at the forefront of German engineering with groundbreaking and era-defining cars.

Whether you’re after luxury, sportiness or compactness, Audi has a make to suit your lifestyle.

To drive home the appeal of the German make of car, CityMag spoke to three Audi drivers about the features they like best of some of the company’s most popular models.

A dream drive in the beautiful beast 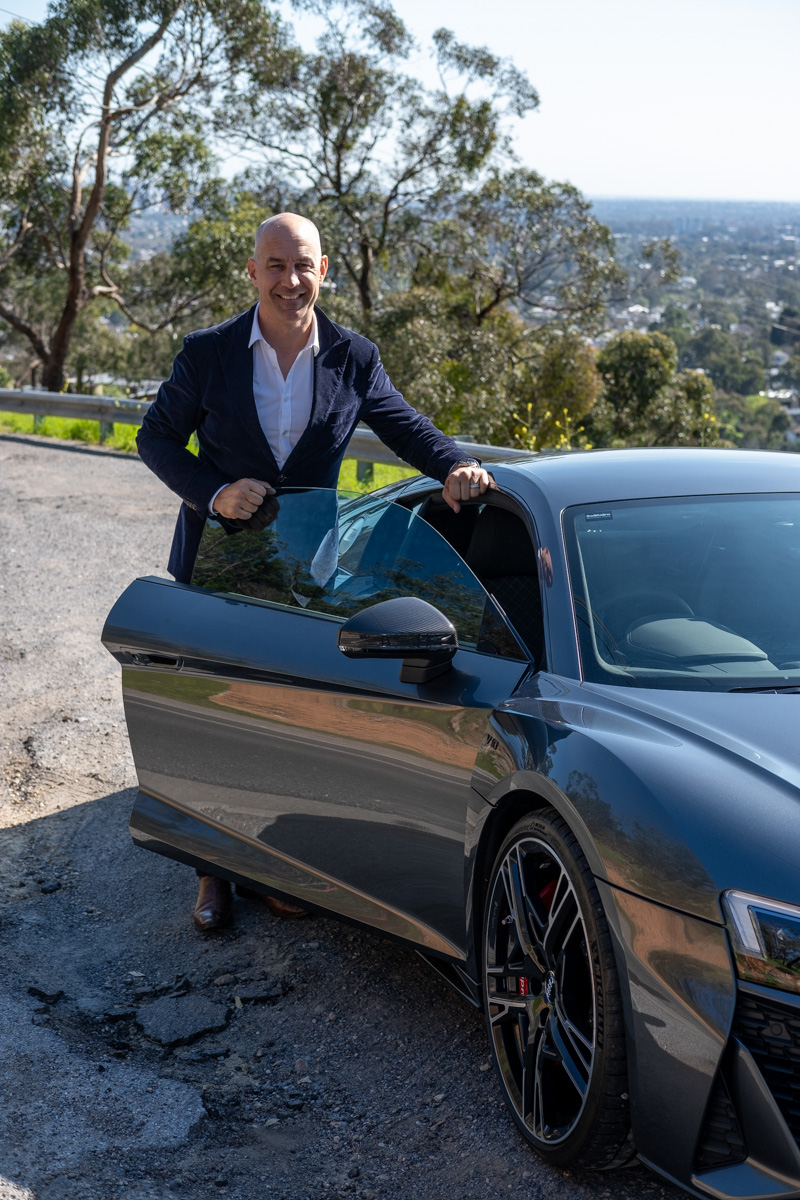 It’s a warm day and Warren Tredrea is behind the wheel of the Audi R8, sweeping through the winding roads of the Adelaide Hills.

The Australian Football Hall of Famer is awestruck by the car’s howling 602-horse power V-10 engine and its onboard technology.

“It’s an absolute dream car,” Warren, an Audi Solitaire Ambassador since 2003, says of the eye-catching drive.

“For you to put your foot down on the accelerator or the brake and for it to respond instantly, heading up to Belair now, it’s just a beautiful beast.”

Warren loves how the car steers, which transports him back to watching Formula 1 as a youngster.

“I grew up watching Ayrton Senna and Alain Prost going head-to-head at the Adelaide Grand Prix, so to get behind these, I feel like an F1 driver,” he says. 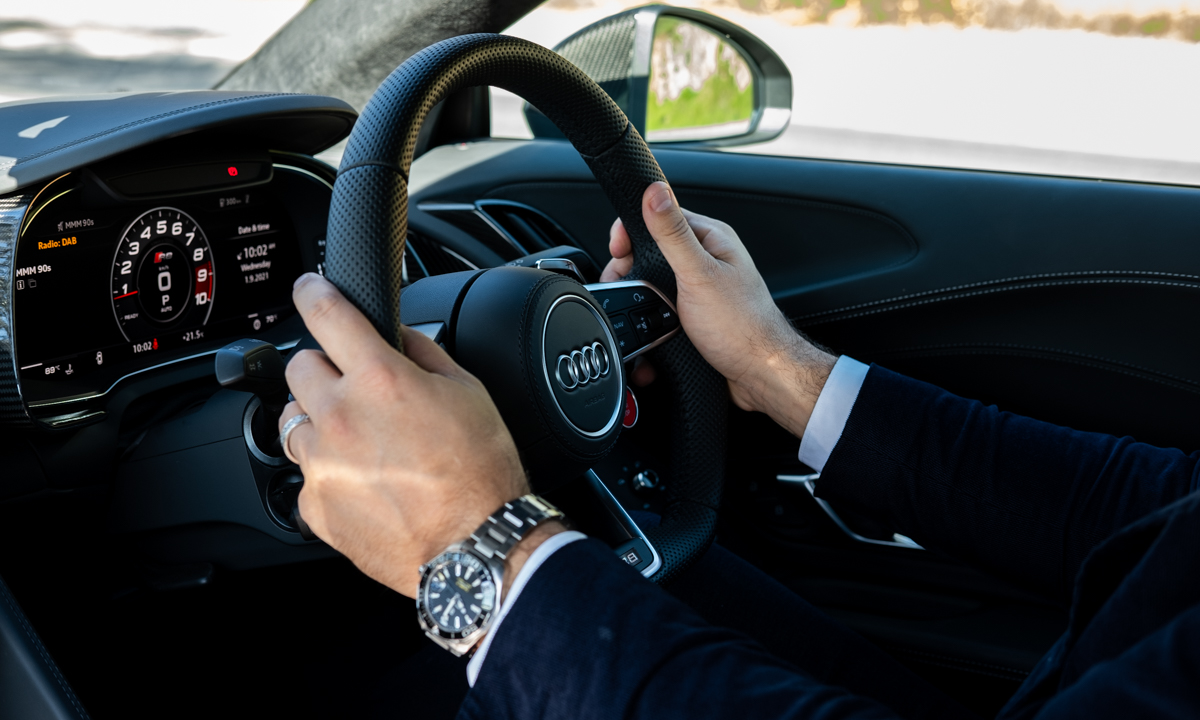 Warren, who played for Port Adelaide Football Club for 13 years before making the switch into media, says Audi’s technology is “mind-blowing”.

“You almost laugh at what these cars can do, because it’s so unbelievably good,” he says.

“I’m a driver who loves cars and didn’t really understand the difference between three or four different options.”

“Traction control, all-wheel driving – they are all unique pieces of technology that assist people in day-to-day living.”

The light, compact car fit to park — or stack 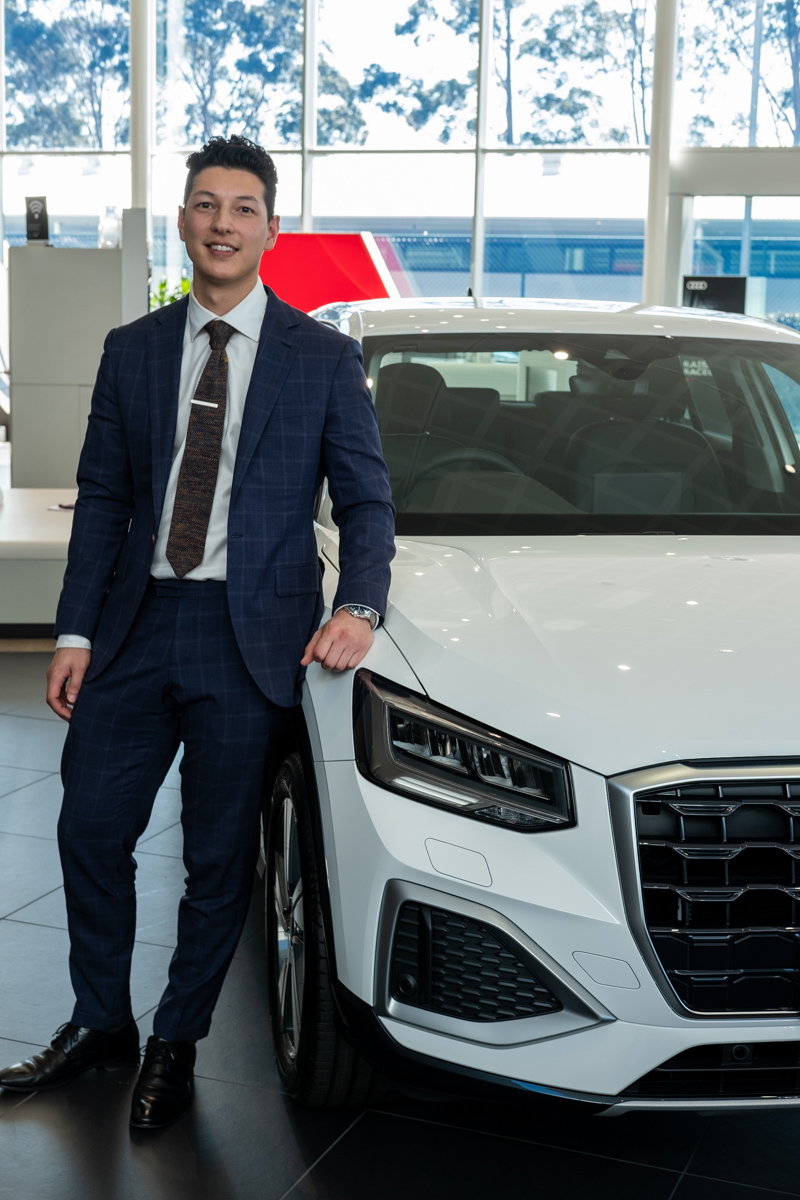 It turns heads for its sharp-looking exterior, and it packs a punch behind the wheel with its 1.5-litre engine, but one of the best features onboard Audi’s Q2, according to John Zaharis, is that it completely removes the parking hassles of everyday cars.

Boasting a four-cylinder petrol engine, the Q2 features a rear-view camera, cruise control, an onboard navigation system and the option of park assist.

“It’s a compact SUV, and you get to experience the practicality that an SUV offers,” the Audi Solitaire sales consultant says.

“A gentleman just moved over from Melbourne and moved into an apartment that utilises a stacker. The Audi Q2 was perfect for their lifestyle because they didn’t do a lot of driving, a lot more stop-start driving, but it was easy to get around town in.

“They could then park it away in their stacker in a dedicated allotment, which was a squeeze for their Holden Commodore.”

The stop-and-go function, which cuts down petrol, and the anti-collision feature are some of John’s favourite perks aboard the Audi Q2.

“That is super helpful on long drives, and means the car will stop autonomously and will accelerate as the vehicle in front moves away,” John says.

“It’s a handy little option and a lot of competitors don’t have this high-tech safety feature.”

Fit for the whole family (and their BMXs) 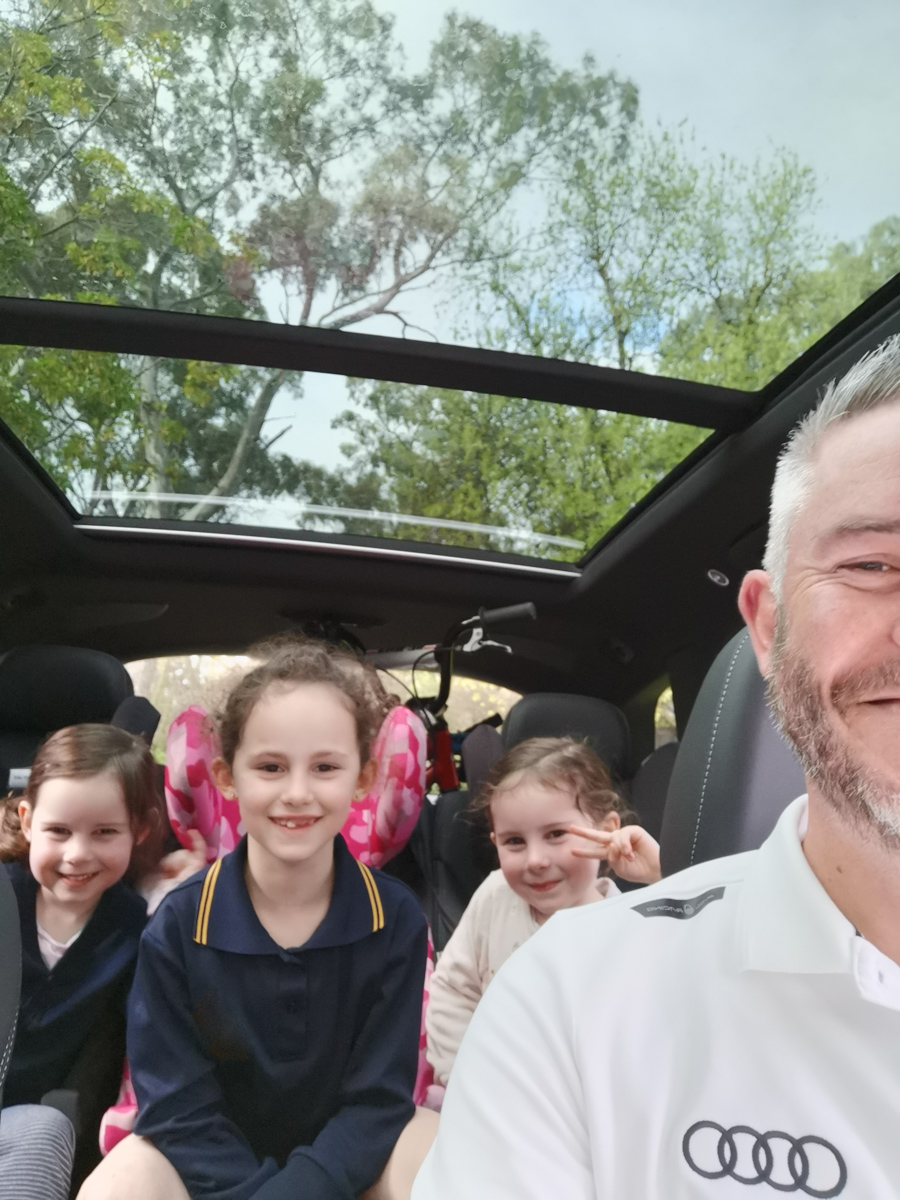 When James Oster was picking out a family car, he went for the biggest in the Audi range.

Audi Solitaire’s Sport Specialist had his choice of any on the floor. But it was the luxurious Audi Q7 that caught his eye.

The versatile seven-seater SUV, with a stylistic exterior, futuristic interior and suite of special features was the best fit for James and his young family.

“This is the biggest car in our range, and it’s our only dedicated seven-seater,” James says.

“My eldest is seven and the twins are five, which means they are all in booster seats still, so the Q7 is easy to fit them across the back seat.

“It’s rare that I would use the seven seats, but it’s nice to have it if you do need it. The kids also love riding their BMX bikes and we just chuck them all in the back because it’s got a massive boot.” 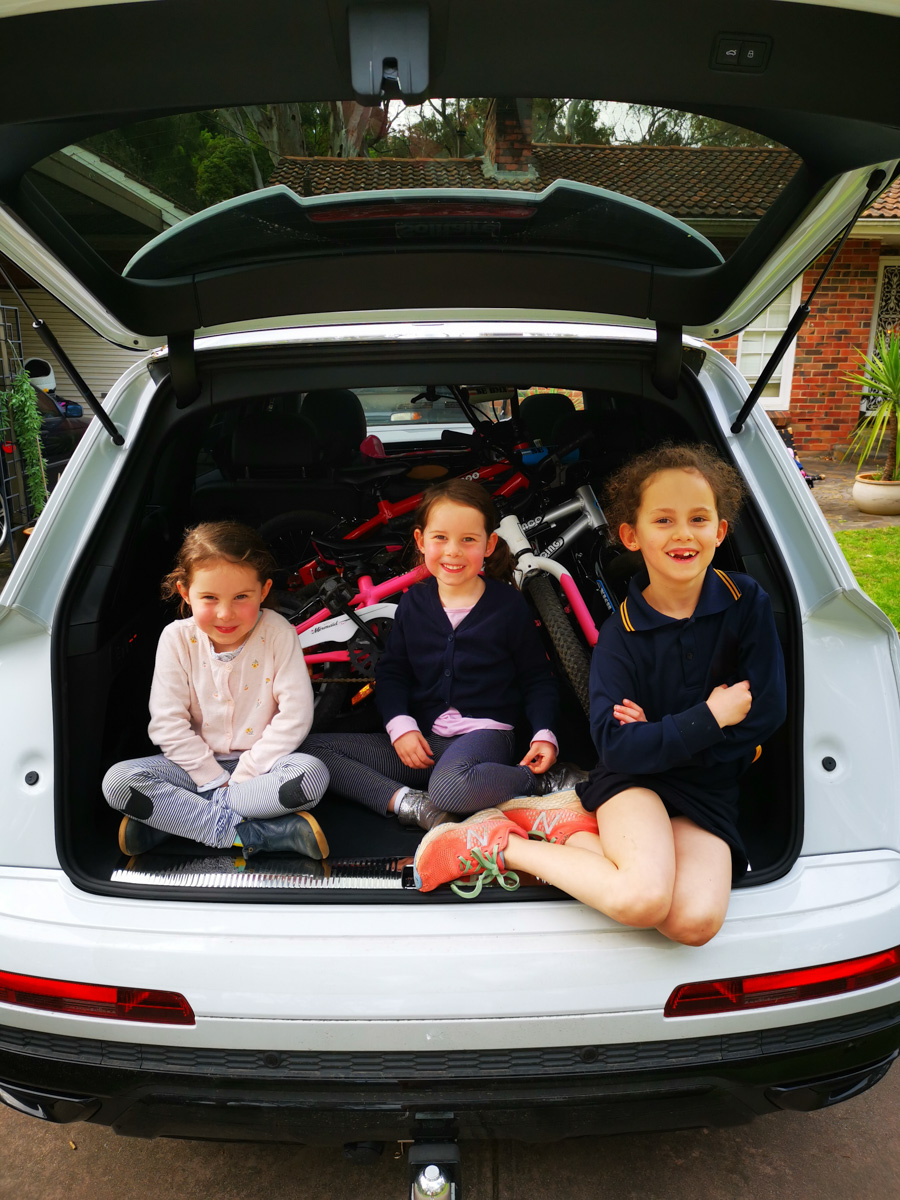 James and his family live in the Adelaide Hills, and he says the Audi Q7 complements his backyard perfectly.

Interested in the R8, Q2 or Q7? Learn more at Audi Solitaire today.

“This is a big car, but it’s agile and you can really throw it around corners – it’s surprisingly nimble,” James says.

“I mainly go out with the kids when I’m off work on a Sunday and we spend a lot of time in the national park. It’s a great long drive, and the car is really frugal on fuel.”

The air suspension is one of James’ favourite features of the car, as well as its memory seating, 360° camera and sun roof.

“The adaptive air suspension gives you a great amount of comfort, but it also gives you that grip and traction and it handles really well,” James says.

“It’s a very high-spec car straight out of the box, and there are very few optional features you can add to it.”

But there is one special feature that keeps his three young children entertained in the backseat.

“The kids love the ambient lighting inside, they love the different colours that light up in the interior,” James says.

“A car is a car to them, but they do really like that.”