With less than 200 years of European settlement and construction on the Kaurna Adelaide plains, this small cottage in the northwest corner of our city invites us to imagine what our heritage buildings might look like in the future.

Gray Street is an anomaly in the city of Adelaide, its pleasant suburban quality made all the more conspicuous in the heart of our CBD by the giant spaceship that hangs over it.

Head down Hindley Street with the setting sun in your eyes, turn right at Yianni’s Yiros shop, and you’ll find yourself staring down a cottage-lined street with the SAHMRI building clearly visible at the northern end.

SAHMRI looms large over the horizon of rolled steel roofs, like a tear in the space-time continuum.

Matt and Sally Davis are architects with a long-held interest in Adelaide – specifically, the city centre and the change it’s been undergoing.

“Starting with the [Integrated Design] Commission, the last seven or eight years has been about the transformation of the city,” says Matt.

“There’s been so much talk about change in the city and policy and heritage policy and all this stuff, but you just need to recognise all of the real change you see going on in the city is when people put their money where their mouth is and invest their time and effort and talent into doing something great.”

But while adaptive re-use has turned our hulking heritage buildings of commercial scale into boutique offices and small bars, the humble yet iconic Adelaide cottage has remained relatively untouched by innovation and design. 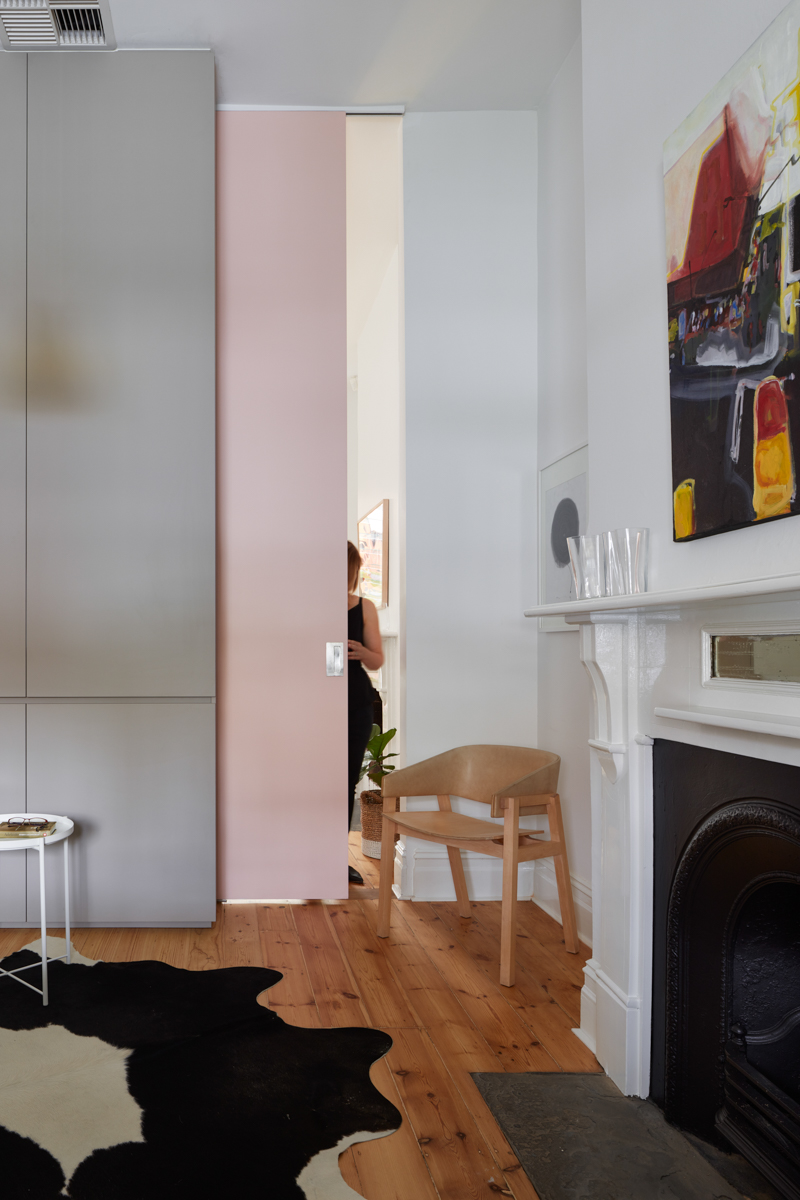 Enter Matt and Sally, and their combined dedication to turn a simple stone cottage into a modern marvel with adaptive uses, spaces, and exquisite fittings and features.

“I always think of this street as a bit of a forgotten street,” says Sally.

“Most people would buy a cottage there and more or less keep it intact, with a traditional fit out.”

But Davis and Davis Architects were looking to make a statement with their building – they were also looking for an office.

“To be honest, we weren’t looking for a heritage cottage originally. We were looking for something we could mould and change and make our own – as an expression of our practice,” says Sally. “The daggier, the better.”

Landing on the Gray Street cottage, however, pushed the designers to really think about the layout and limited floor space in a creative way. Unlike a house, which is usually occupied either side of the daylight working hours, this cottage had to be a place Sally and Matt wanted to work in all day.

“You want light and you want sun and you want outlook, and that’s not what you get with the traditional cottage layout,” says Sally.

Starting with the sun at the centre of their project, Matt and Sally reinterpreted the form of this historic building, and essentially reoriented the interior aspect of the house to bring in the northern light through a large light well that doubles as a courtyard.

The result is discombobulating. As you enter through the heavy wooden door and heritage façade, you can instantly see the length of the house as it moves into a completely modern and sun-drenched dining, living and kitchen space at the back. Anyone who has rented, lived in or visited a city cottage will understand how unexpected such a view would be. 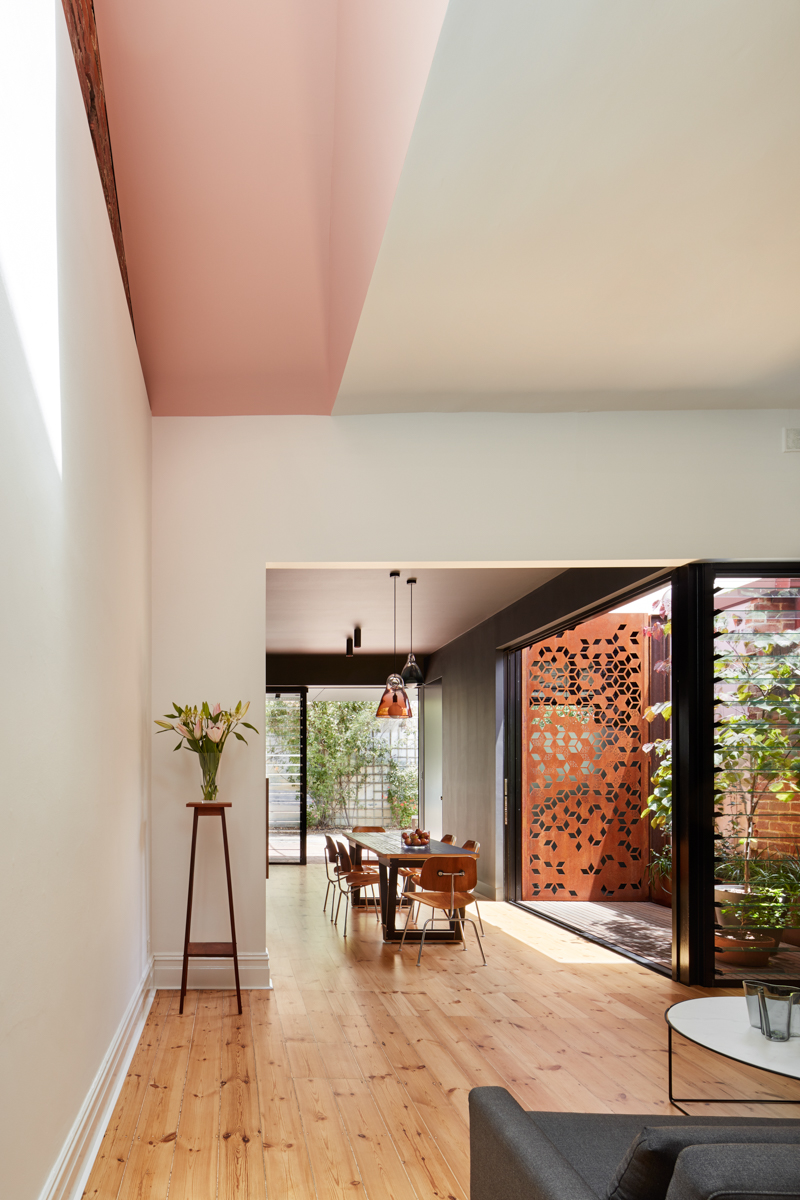 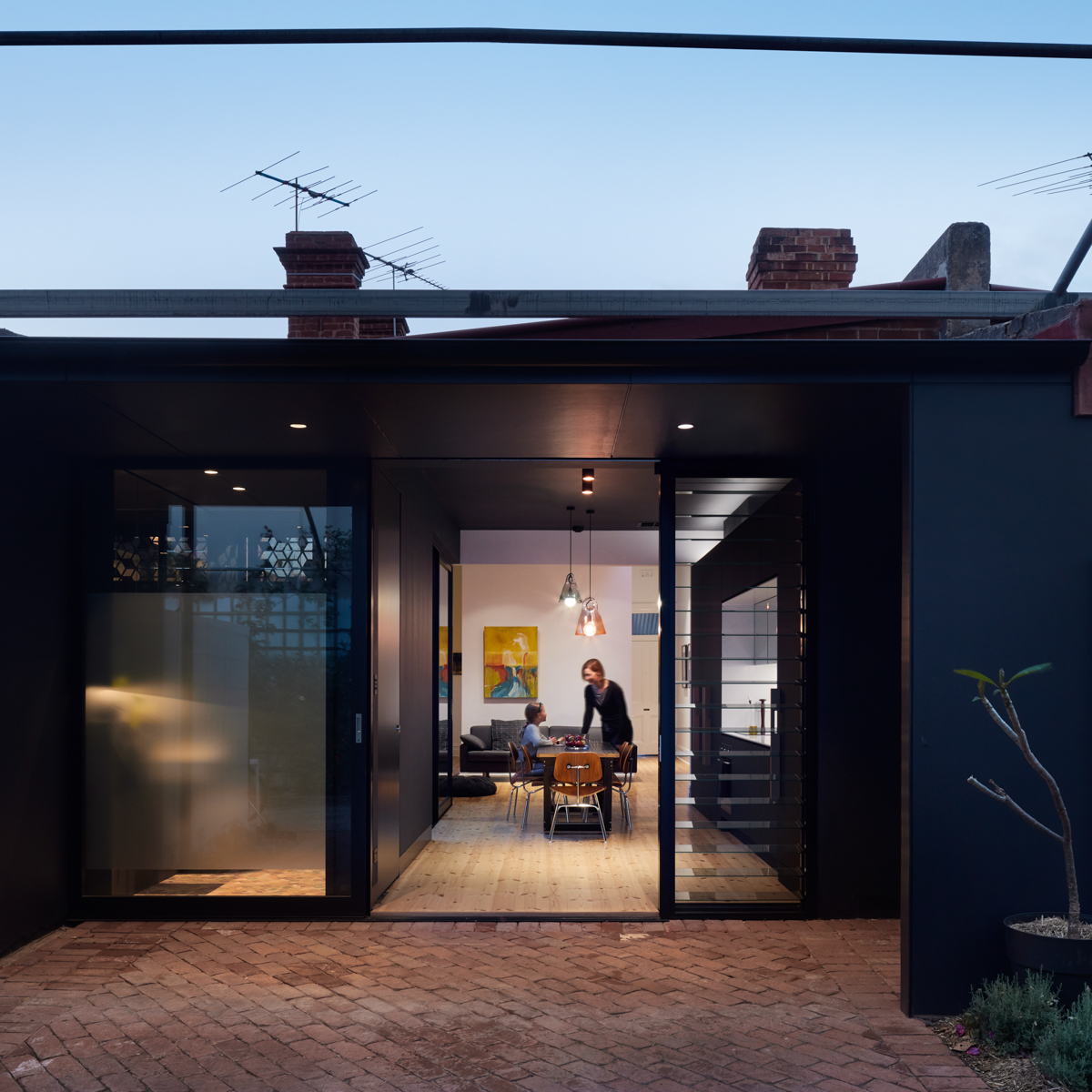 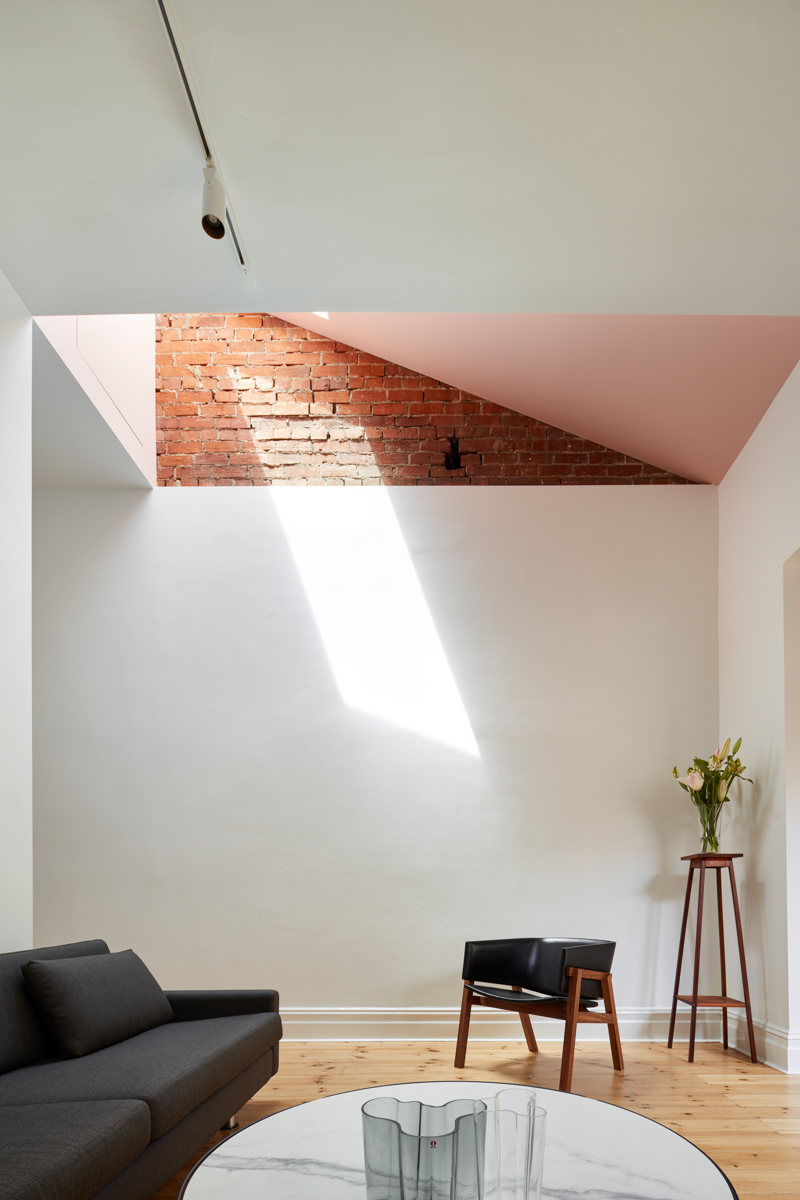 “If you’ve got something that’s small,” says Matt, “the bits that you’ve got have to work really hard. They kind of need to be multi-functional and adaptable.

“The big sliding doors, they’re about getting the benefits of cellular rooms and privacy when you want it, but then being able to really open it up, so you’ve got those long and generous views throughout the house.”

The normal view upon entering a typical Adelaide cottage is of a dark, narrow passageway lit by electricity and with little-to-no visibility into any sort of living space.

Heritage in Adelaide has the default approach of maintaining the status quo while never providing for what our heritage could look like in the future.

Protecting buildings and the character of our street is important, but it must be understood that it was characters – real people – who built those buildings in the first place.

“We got the approval to do the work, all of that refurbishment work, in two weeks,” says Matt, adding that it was a very simple approval. But when he and Sally wanted to attach security bars to the front window – like the rest of the houses on the street – the approval took four months.

Sally wanted to freshen up the paint scheme and colours of the front of the house but was told, point-blank, to stick with what was already there.

“‘It’s really not worth your time or effort going down the track of trying to change anything,’ is what we were told,” says Sally. “It was really disheartening.”

There were no photos when Colonel Light laid out his plan for Adelaide. The first photographs of our city’s buildings were rendered in black and white only. So why then are we pretending to be so concerned with a temporary colour that can and should be changed as often as the homeowner has energy to?

Heritage must be promoted rather than protected. And the best way to promote our unique heritage into the future is to ensure it serves a purpose in the present. 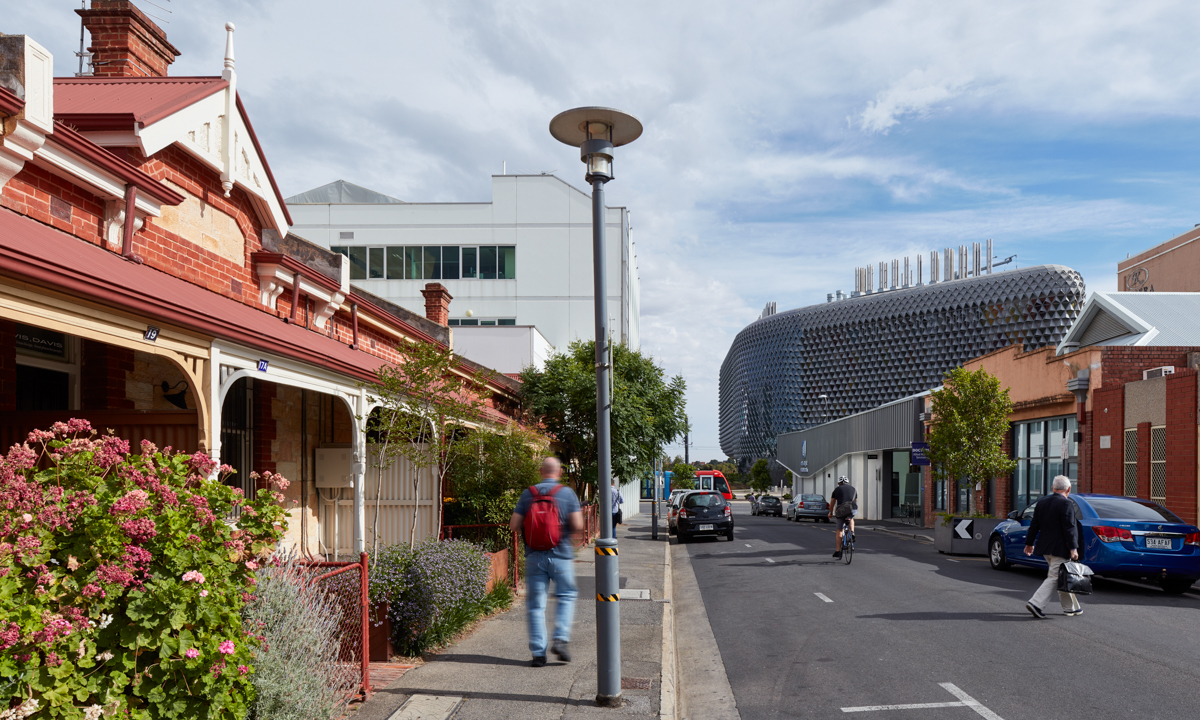 Matt and Sally have invented a new city cottage, based on 21st Century ideals of openness and adaptability that, in 1850, would have been as foreign and inconceivable as the SAHMRI building now hanging over the humble homes of Gray Street.

And while this redevelopment was undertaken to give the boutique architecture practice a city office, Sally and Matt’s business has since outgrown and moved on. They now have the Gray Street cottage for rent on Airbnb.

The fact Adelaide does not see disruption as a part of our heritage should be challenged. Thankfully for Adelaide, Matt and Sally have created an example for how we might do things differently and, in the process, create a future heritage the city can be proud of.