You won’t find any spaghetti with these meatballs.

Peter DeMarco is a busy man.

Each week, he can be seen at Borsa Pasta Cucina, Chicken and Pig, Pizza e Mozzarella Bar or Zucca – four of the five restaurants the chef currently owns and coordinates. 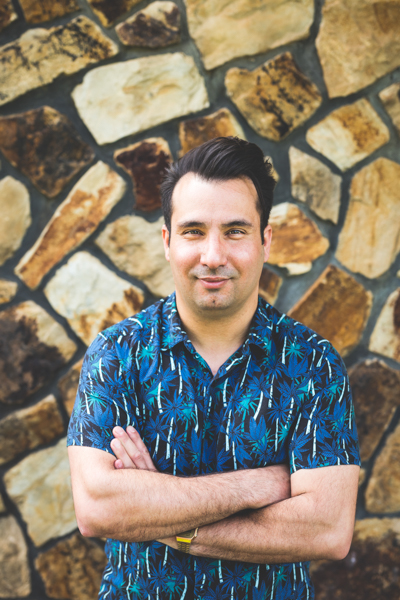 Running a full-time schedule with contact hours at each location is hard work, but Peter knows it’s the key to consistency.

“I relieve my partners who are generally the ones cooking,” he says. “I go and set up the recipes, then monitor the standards. Basically, I do a day at each place to make sure everything is going well.”

Despite the intensity of his schedule, Peter made the time to join us on a Saturday morning at a flashy new BBQ just north-east of the lake in Rymill Park.

His wife Nadia and three children have come along too and the dish he’s cooking seems particularly relevant with them around. He’s prepared some polpetta (meatballs) ahead of time to grill on the barbeque, which get served with crispy pancetta and a salmoriglio dressing.

“When we have barbeques and picnics we usually do these grilled so you can pick them up and eat them,” he says.

Salmoriglio is a mixture of olive oil, oregano, lemon, garlic and salt, and can be used as a marinade or finishing sauce. In this case, it’s drizzled on the hot cooked polpetta which will soak up all the flavours.

For Peter, an ability with flourishes like salmoriglio comes from years spent in the kitchen.

“I was probably 16 years old when I started cooking. I finished school on a Friday and started my apprenticeship on the Monday,” Peter says.

Leaving school in Year 10 proved to be the right choice.

“I had a passion for food, that’s all I wanted to do, still love it today. I actually enjoy it even more now, […] being able to please my family and friends and bring everyone together.”

“I had a passion for food, that’s all I wanted to do… I actually enjoy it even more now.” —  Peter DeMarco

When Peter’s nine-year-old son Daniele enquires why dad isn’t wearing his food safe gloves, it becomes clear food is a passion for the whole family. This is confirmed when Daniele matter-of-factly tells us he’ll be taking over the family restaurants one day.

While he’s cooking, Peter reveals this polpetta recipe comes from the DeMarco family, and there are a few secrets to getting it right.

“You’ve got to use fresh breadcrumbs, not dry, and soak them in just the right amount of milk so it’s absorbed but not drenched,” says Peter. “Good quality coarsely minced veal and pork is key, with at least 20 per cent fat. Not too lean or it’ll be grainy.”

Similar polpetta can be found on the menu at Borsa Pasta Cucina, simmered in a sauce, but the preparation differs for this use.

“I put a nice punch of garlic in these for grilling, but if I do it in a sauce I don’t add garlic. it doesn’t need it, there’s too much happening then.”

The tips and tricks have paid off – soon after six-year-old Allezara asks, “When can we eat it?”, the polpetta are plated up and then almost instantaneously gone, the remnant salmoriglio enthusiastically mopped up with crusty bread.

From early January you can find Peter making this kind of crowd-pleasing food and much else at Chicco Palms, his new mid-century styled pizzeria on Henley Beach Road (located in the old Barnacle Bills).

He’ll be in the kitchen full time for the first month to make sure things run smoothly, so Daniele can rest assured that the family business and his future are being well looked after.

Place all the ingredients for the polpetta in a large bowl and mix together until well combined.

Shape in to golf-ball sized pieces and if you’re transporting to the park, store in a container layered with baking paper. 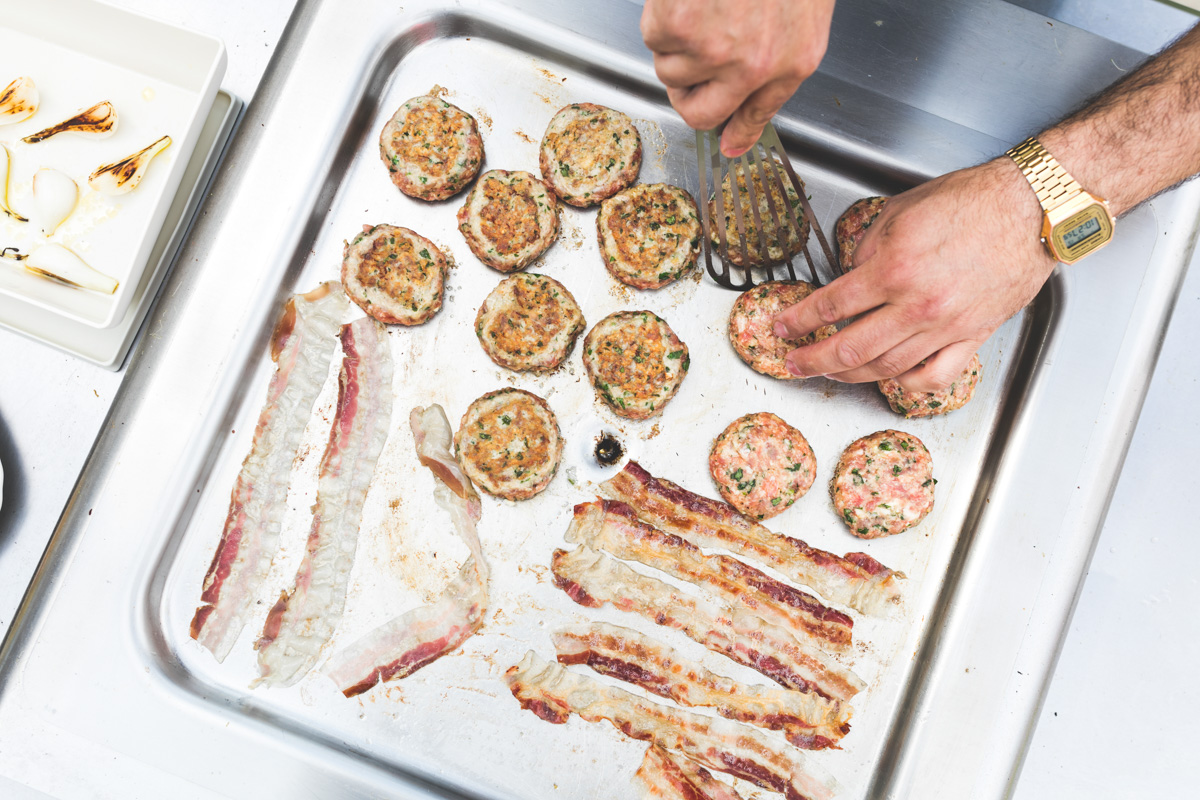 Press polpetta on to the BBQ and flatten slightly. Meatballs should be browned on each side and cooked through – the best way to check is to cut one open. Another way is to consult your trusty sous chef: 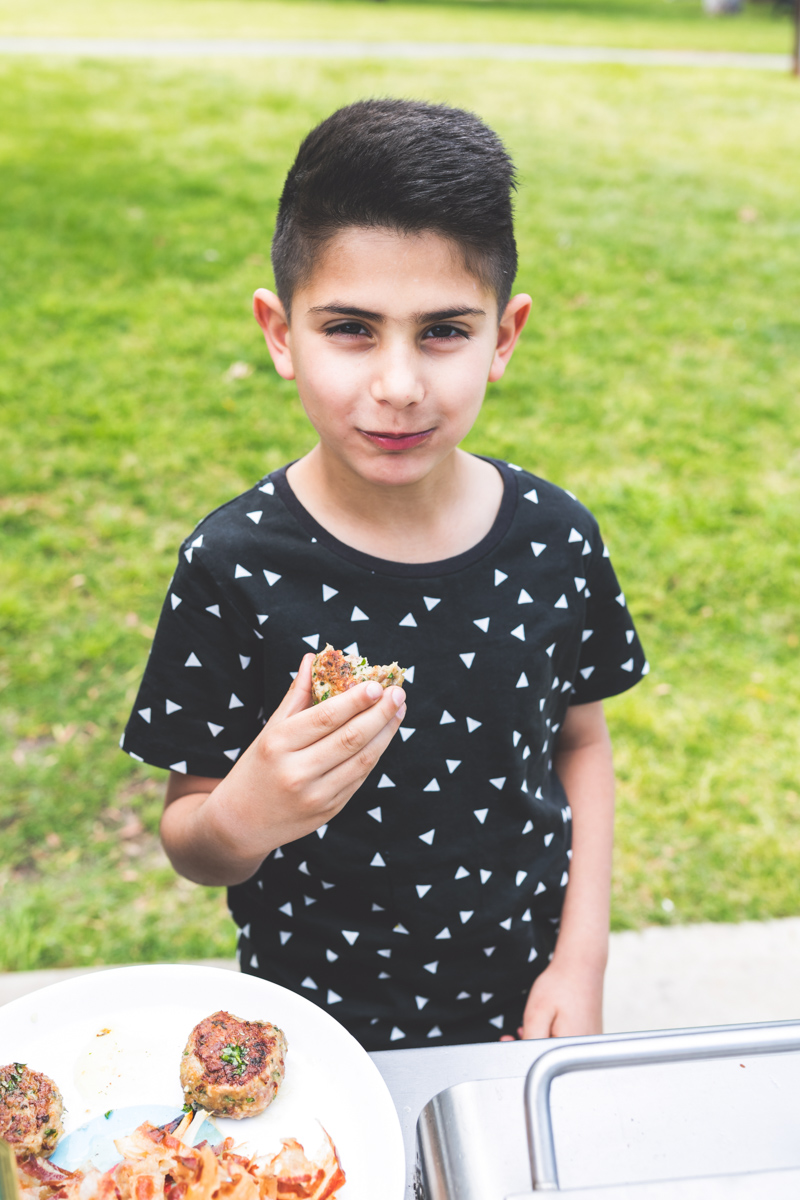 Daniele gives the polpetta the all clear

Combine salmoriglio ingredients in a small bowl ready to garnish.

Grill pancetta alongside the polpetta and remove when crisp. 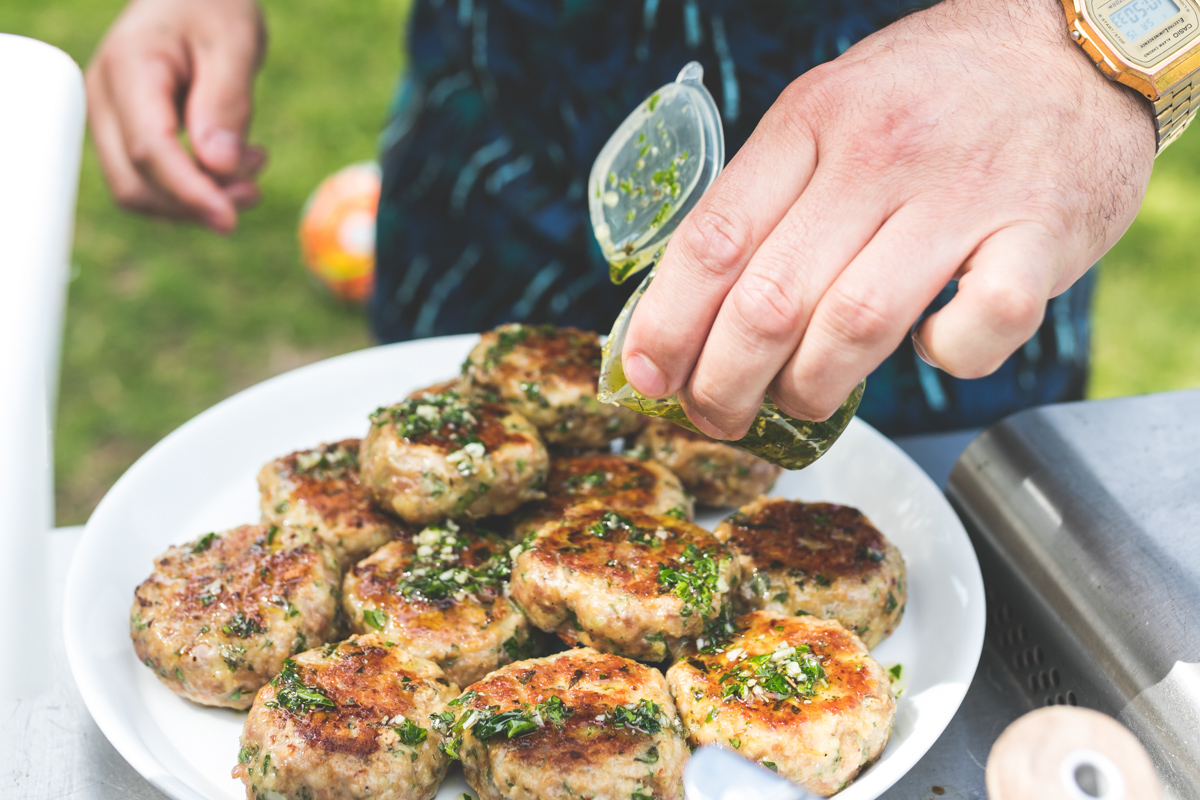 Drizzle on the salmoriglio while hot and top with crispy pancetta. 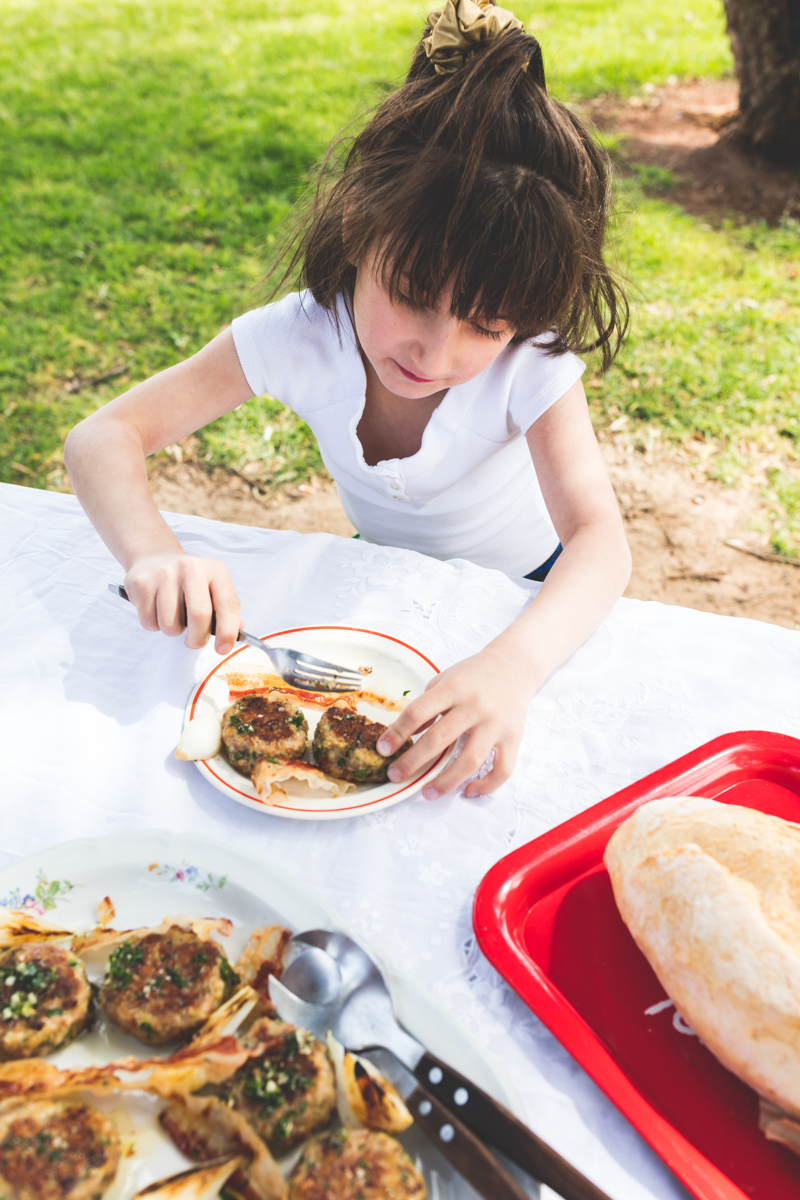 Allezara, also happy with the result