CityMag tours Adelaide's meme-page landscape to understand the mass appeal of poking fun at our city on social media. 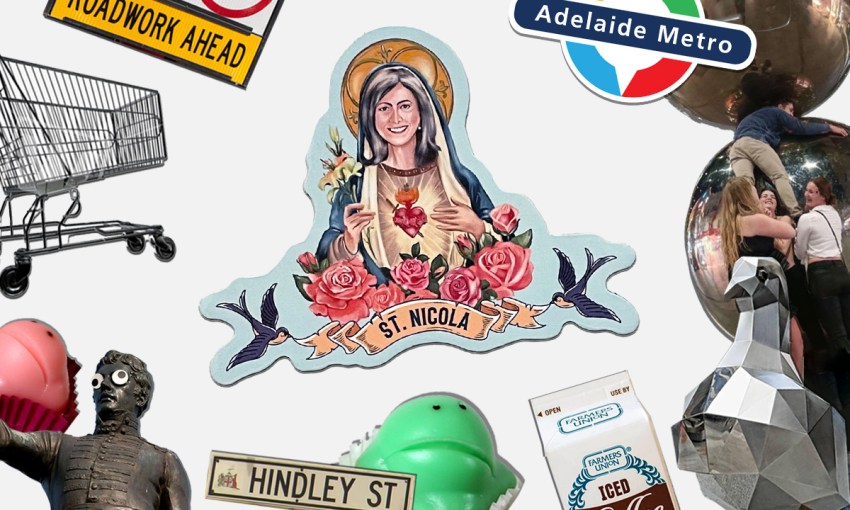 In our social media age, nothing, no one, and nowhere is above becoming a meme.

Memes are part of the internet’s lingua franca, and exist as our collective sense of humour. A good meme will twist to fit any subject, oscillating wildly until the original reference is obscured by a fog of in-jokes.

Renee Miller was The Mill’s Writer in Residence from January to June 2022.
This work was contributed through The Mill’s writer-in-residence program.
For more information on the program, see here.

While memes exist on all social media platforms, as a visual medium they thrive on Instagram.

There are a number of accounts dedicated to doling out daily memes, the largest of them having the broadest themes, or no theme at all, and generating jokes about pop culture and world events. A meme page can and will spring up to cover nearly any topic.

Adelaide is both a highly targeted subject of memes, and a breeding ground for the humans who make them.

Just Adelaide Things (JAT) is the largest Adelaide-themed account by far. They’ve been around since 2015, starting out as ShitAdelaide (a name they’re still best known by), who we featured in a list of SA’s top 20 most influential people in 2018.

The name change came in 2020 after the original account was hacked, though they’ve since regained control of it. Their brand is championing and taking the piss out of South Australia in equal measure.

The JAT team (assuming it’s a team – they wouldn’t talk to us) make memes and run polls to find out SA’s favourite snacks, but the bulk of their content is user-submitted. This ensures they get the scoop any time someone drives onto the O-Bahn, or whenever a crude custom number plate debuts on Adelaide streets.

They are a noticeboard for wacky happenings in Adelaide, be that satirical Facebook marketplace postings, horrendous parking, or people scaling The Malls Balls.

If something strange happens in Adelaide, you’ll likely see it on JAT, and for social media users, getting a submission posted by the page is a badge of honour.

In the peak of uncertainty and shifting restrictions during the pandemic, JAT evolved beyond their usual antics and began acting as a makeshift news service, reposting SA Health announcements. They even built South Australia’s chief public health officer, Nicola Spurrier, into a meme, raising her – and by extension South Australia’s pandemic response – to State Icon status alongside Farmers Union Iced Coffee and frog cakes. St Nicola fridge magnets are currently available for purchase.

JAT’s decision to comment on the pandemic was not universally welcomed. You only have to scroll through the comments of their posts from COVID’s early days to see people sounding off in a variety of inflammatory ways, demanding the account stick to jokes. But in many ways, JAT and ShitAdelaide transcended its beginnings as a joke page. They are now a publisher and a personality.

In JAT’s wake are a collection of newer Adelaide-centric accounts that are much more niche in theme.

Adelaide Affirmations has surged since entering the scene in late 2021, a local riff on a popular pre-existing meme page. Their account plays off the chaotic aesthetic of the relentlessly positive daily mantras that are big on Instagram. It offers slightly unhinged and highly specific affirmations to get you through your Adelaide commute, university classes, Peregrine Corporation traineeship, or interaction with a Port Noarlunga eshay.

Some other accounts include Incellectuals Adelaide, who post about local band culture, and Adelaide Mail, a South Australian take on The Betoota Advocate (which itself borrows from The Onion). Like its predecessors, the Mail shares satirical news headlines and photos on Instagram and Twitter.

Most of these accounts – and meme accounts in general – are run anonymously, with the founders fiercely protective of their identities. This makes them difficult interview subjects.

One account that did accept CityMag’s interview request was Abandoned Trolleys of Adelaide (ATOA), one of the city’s smaller accounts. Its owner, who chose to remain anonymous, describes their content as “niche. A bit peculiar, and funny”.

The premise is the anthropomorphism of abandoned trolleys in photos sent in by their followers. The inspiration was, simply, the many stray trolleys that are commonplace throughout suburban Adelaide.

“The thought of deliberately trying to grow this account freaks me out,” ATOA’s owner tells CityMag. For them, it is purely a creative endeavour.

That said, they do “enjoy the sense of camaraderie between the SA [meme] accounts”. “The more obscure the better, in my opinion,” our ATOA source says.

According to UniSA PhD candidate Jonathan Stokes, whose research analyses the #GucciModelChallenge meme trend that took place on Instagram and TikTok, Instagram is the perfect platform for meme accounts to thrive.

“There is this really big meme culture online and on social media, particularly on Instagram,” Jonathan says. “A lot of the memes that [these accounts] share are relatively still images, as opposed to videos. I guess that pretty much sums up Instagram as a whole. It’s a very shareable platform with still images.”

Not every account finds success. Typing varying combinations of “Adelaide” and “meme” into Instagram’s search bar uncovers plenty of abandoned accounts dedicated to things like the Adelaide Metro, pigeons, and the Adelaide Crows.

“I think sometimes if people aren’t necessarily familiar with social media, they don’t understand the amount of work and time that goes into an account.”

All of these accounts, active or stagnant, twist local culture and humour through internet rhetoric, converting a person’s understanding of their place in the world into a cypher.

“I feel like with the meme accounts, it’s almost like a culture in itself – the meme culture – and in that you have subcultures,” Jonathan says.

“So, if I am in the northern suburbs, and I see a meme come up about Elizabeth shopping centre or something like that, then I’ll find that funny. I can relate because I have been there.”

For Jonathan, the appeal of local memes, as with memes generally, lies in their familiarity and relatability.

“There is always that saying that Adelaide is just a big country town… It very much is that tight-knit community, which is, I guess, really what’s fostered these meme accounts specifically in Adelaide,” he says.

“I think there’s a sense of connection to it that you don’t experience on bigger pages, because you’re seeing familiar places, people, and situations,” Poppy, an Adelaide local, says.

Another local meme fan, Henry, says the appeal is being part of an Adelaidean in-joke.

“I don’t follow any [other meme pages], only Adelaide-based for me,” he says. He started following ShitAdelaide after his skateboard was stolen from his car, hoping they could put the word out. “I continue to follow ShitAdelaide for humour specific to my hometown.”

John, another local, follows many meme pages, if only to keep his timeline honest.

“I think it’s refreshing having these meme pages in my feed on Instagram to break up the facetiousness that always comes with a social media platform like Instagram,” he says.