The unseen creatives of Adelaide

A theatre show is much more than the hour or so of action you see on stage.

It takes a village to put on a good performance.

To prove this, Windmill Theatre Company let us behind the curtain of Hiccup! to meet some of the unseen creatives who’ll make it happen.

Hiccup! is an “extremely silly psychedelic rock extravaganza” filled with references to The Ferals and The Muppets, and featuring sleep deprived camper Eddie, who takes to the bush to get some peace and quiet.

As he dozes off, he hears an ear shattering cacophony coming from the treetops and discovers that a koala has come down with a very severe case of the hiccups. He works throughout the night to find a cure so he can get some rest before sunrise.

It’s a show about working together, finding friendship, and how to stop hiccups once and for all so everyone can get a peaceful night’s sleep. 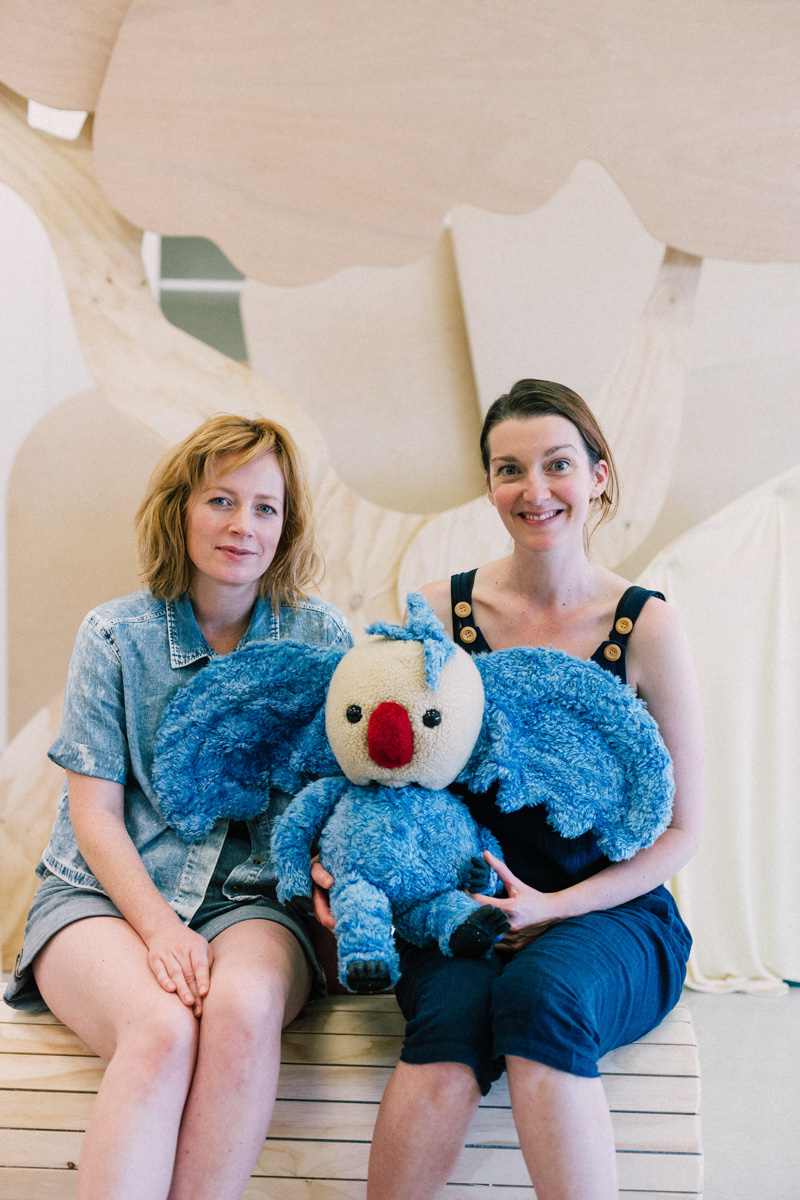 Jude and Ellen have a creative partneship that dates back to 2003, but they both say they’ve been active within the arts industry since about 2006. They are the co-writers and -directors of Hiccup! Both Jude and Ellen were founding members of theatre group isthisyours?, of which Ellen is still listed as a current member. Ellen first came into Windmill in 2006, the year she graduated from Flinders University Drama Centre, through a creative development opportunity. Jude has acted in several Windmill shows, including Grug, Grug and the Rainbow, Pinocchio, The Wizard of Oz and Girl Asleep. To sum up the Adelaide arts scene in a sentence is not easy, but Jude says it’s both “small and tough”. Ellen adds that the scene here is tight-knit and there is always someone ready to lend a hand. “The community are just so eager to continue creating and to get work out there for audiences in these trying times,” she says, “so even though the situation with COVID has drastically changed how this is possible, there will hopefully still be lots of great new work emerging.” One of the proudest moments of Jude’s career was a “box office disaster” and critically acclaimed piece of theatre called You Wanna Talk About It, created with isthisyours? The show was a “technical feat that pushed me into new artistic territory and I didn’t even perform in it”, she says. 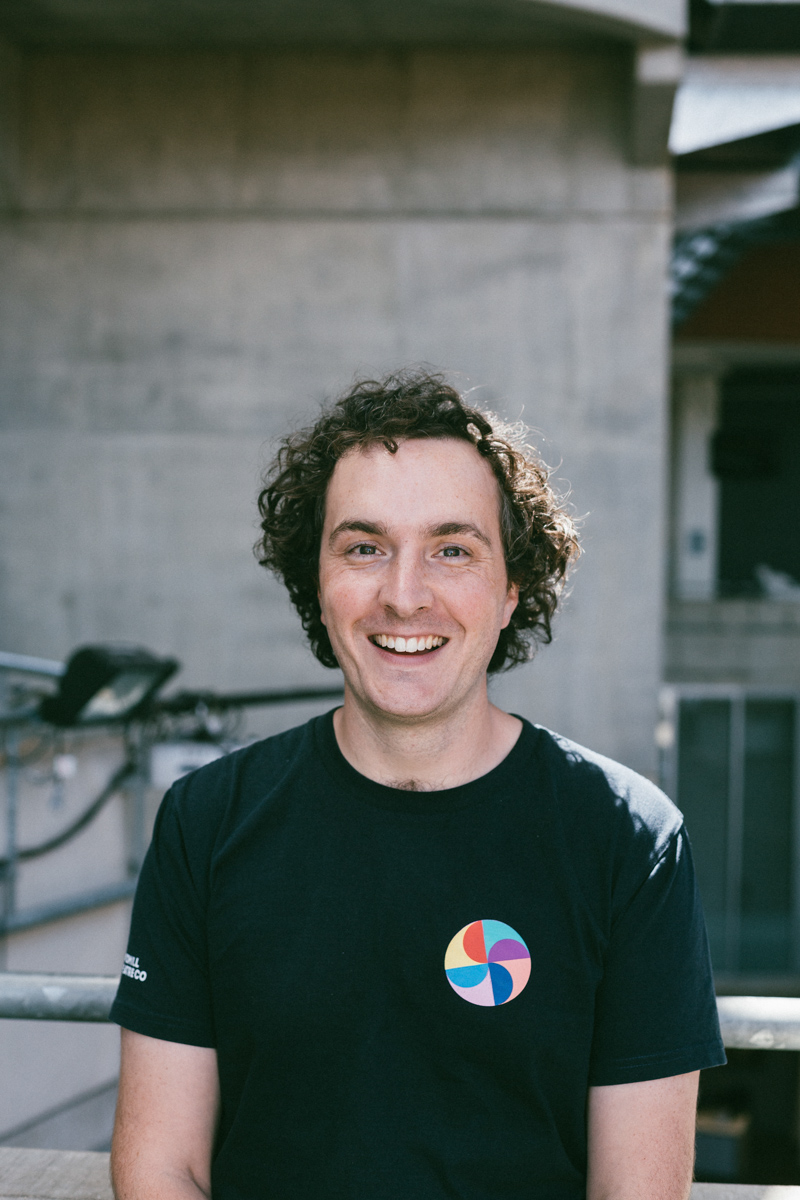 Whether you recognise Ross for his musical output under his own name, as part of a trio or quartet, or in the credits of a Windmill show, the Adelaide jazz musician is an industry stalwart. He is the composer behind Hiccup! and is also a producer at Windmill. When asked to count his years in the arts industry, Ross is shocked to discover 20 years of artistic activity. “That said, I don’t think I really did anything of artistic merit until about 2010, so perhaps I’ll just say 10 years!” says Ross, who is also known for his humility. Art is not only important, but fundamental to the human experience, Ross says. “I believe that creativity is a fundamental part of what it means to be a human,” he says. “Aside from satisfying our most basic needs, art is one of the few things that all humans have done across history and in many ways it is one the core aspects of what it means to be human.” The arts can sometimes be viewed as a “kind of holier-than-thou luxury rather than a societal necessity,” Ross says, but he believes this is a “profound misunderstanding” of what art is and can be. “Art helps us contextualise and make sense of the world around us and art has always reflected what it means to be human at any given point in history.” 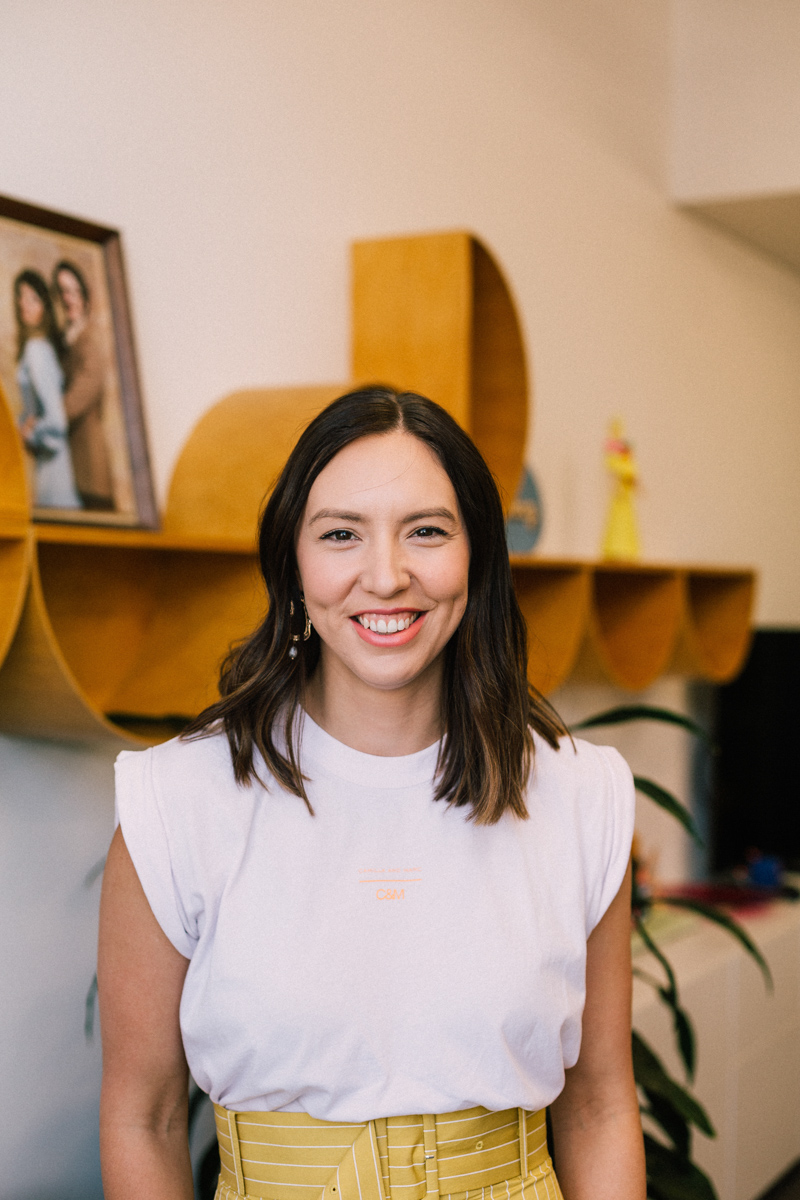 If you’ve ever read or heard or seen or thought of a Windmill show, likely the reason is because Madison planted that seed in your arts-loving brain. Madison is the marketing and partnerships manager at Windmill, and she has been in the industry for six years. She fell into the arts industry after a lifetime of loving going to see theatre, dance and live performance. Madison considers it a “true privilege [to witness] theatre magic come to life, brought together from some of the world’s foremost creative minds.” She loves working at a company where the objective is to create “the most inventive, high quality, moving, joyful and extraordinary art.” Madison feels most proud of her work in one special moment before each show: “It’s a small, one-two second silence before the applause begins and the house lights come up. It’s a tiny moment of reflection (and an overwhelming realisation) of the months, sometimes years, of work it’s taken to get here. You realise the small part you played in this enormous picture, a tiny cog in a giant wheel, and just how important it is. I always cry.” When it comes to Adelaide’s arts scene, Madison is a true believer. “It’s easy for Adelaide to think of itself as small, but there’s big ideas and a lot of great stuff going on,” she says. “People are always innovating and there’s a real sense of camaraderie among different organisations. People are always sharing resources and knowledge.” 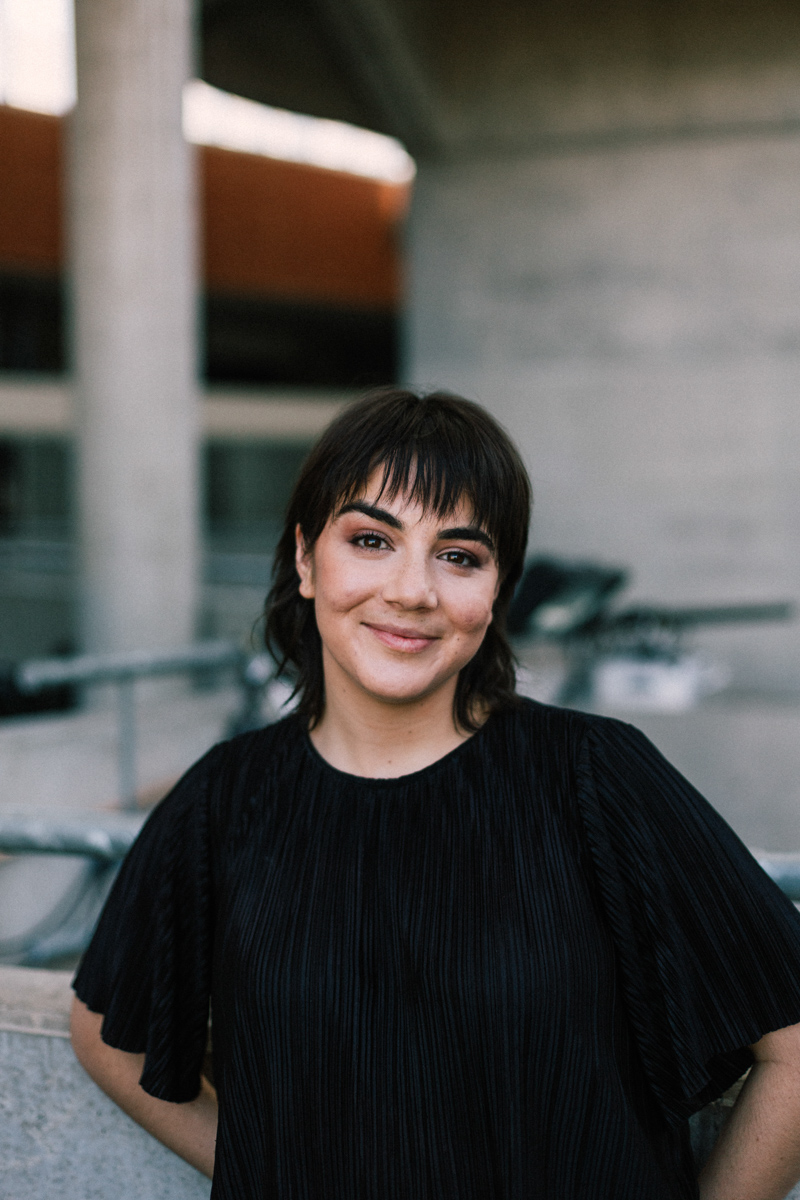 Chiara is a puppeteer playing the role of Quokka in Hiccup! She is also a poet, and she’s been around the arts industry for the last 10 years. Though Chiara says she is proud to have worked on some “truly wonderful” productions, she finds the most pride in her work running creative workshops in schools. “Finding ways to get the most sceptical and ‘cool’ teenager to share their story is so satisfying and empowering,” she says. Chiara says Adelaide’s arts community is small but mighty (and is actually not that small at all). Despite the difficulties of funding artistic work, the people within the Adelaide arts scene are a giving sort, ready to share supplies, venues and skills to help bring a project together. Having not worked with people in the Hiccup! team previously, Chiara felt some first-day jitters, but “once you get have your first day morning tea together, you all become so focused on the same goal, that the artistic problem solver kicks in, and the nerves are forgotten.” 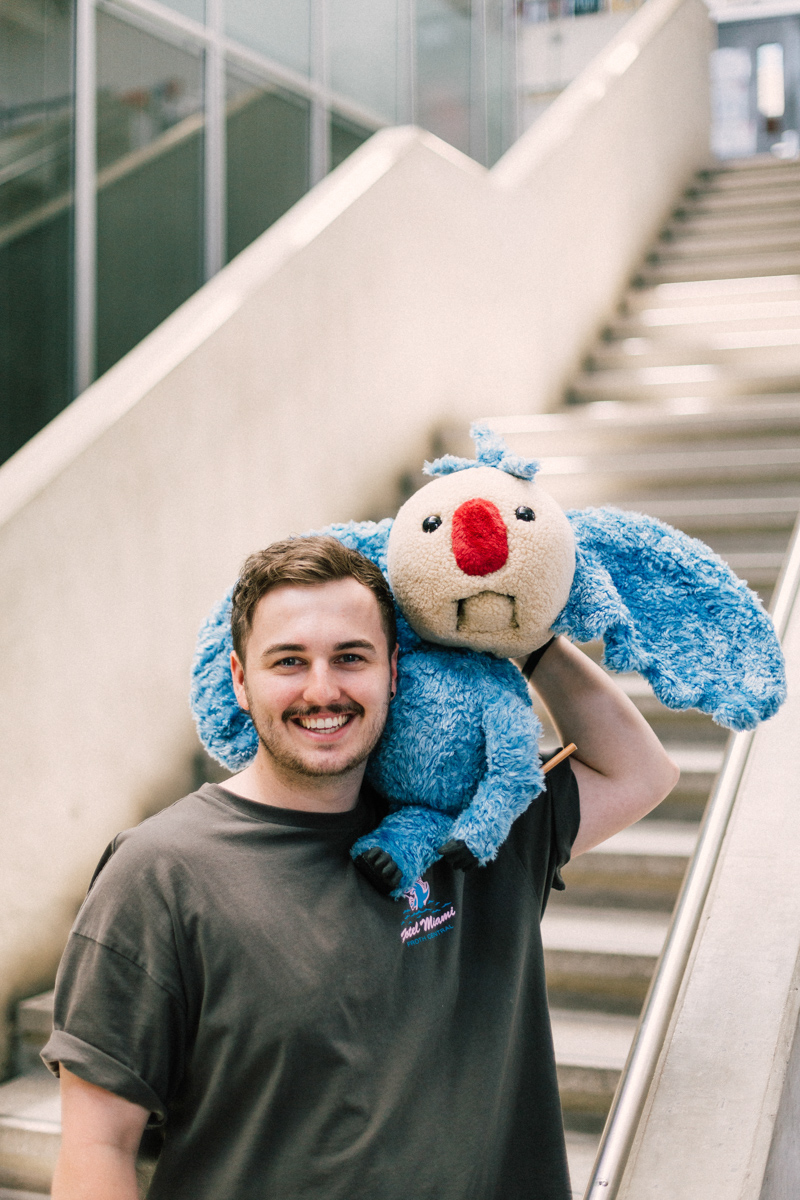 Lachlan is five years into his arts career and is the puppeteer behind Koala, the hiccupping koala in Hiccup! Working for Windmill had been a nine-year goal of Lachlan’s, and being cast in this show was a silver lining to the dark cloud of 2020, and gave him “something to work towards and look forward to”. He reckons it was also a boon for his mum, who was reportedly “stoked to get me out of the house and out of her hair”. Lachlan says the last year has only shown how necessary the arts is to the health of the public, and that the year would have been “much harder without the outlet of escape from the gloomy reality”. It’s great to be around the arts community once again, Lachlan says. “It felt like we seamlessly slipped back into the old days and nothing had changed, except for the new need to elbow bump.” According to Lachlan, if anything, Adelaide’s arts scene is severely underappreciated. “There’s a lot of great work and people out there that just aren’t getting seen and they’re just waiting to be discovered by the general public.” 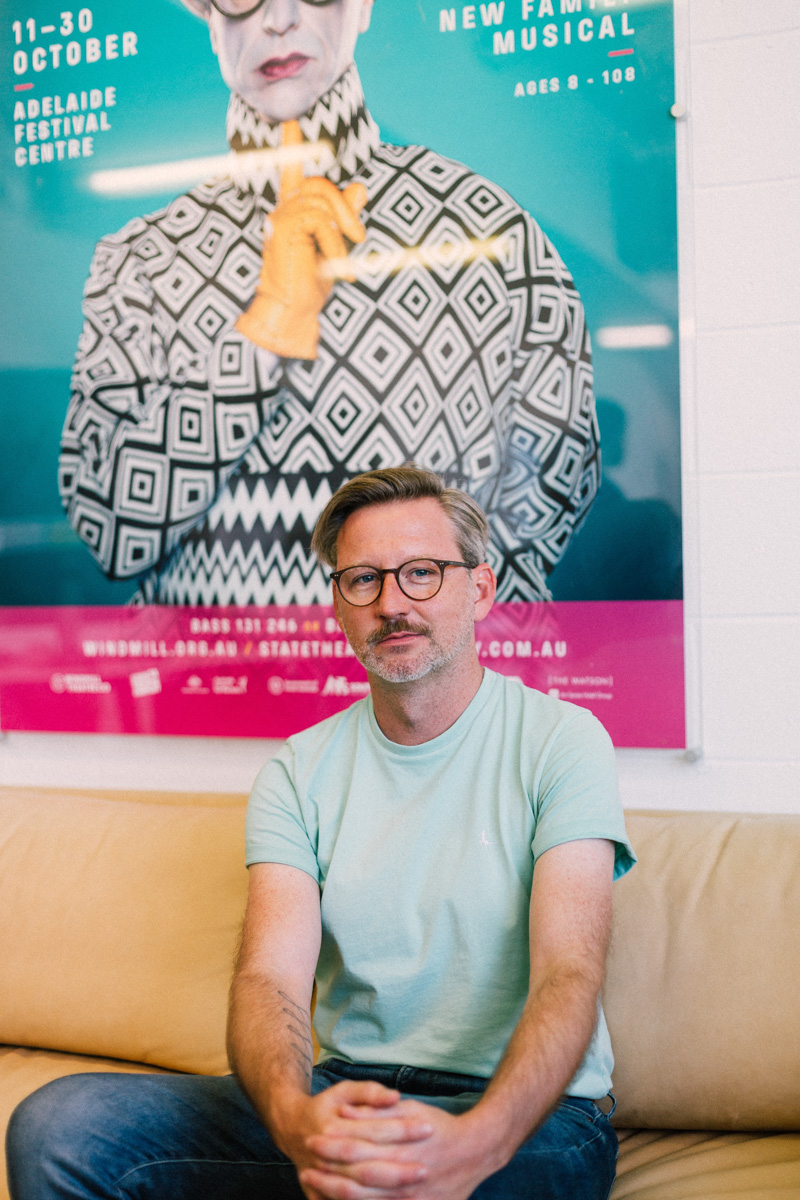 If not for his work in the arts, Jonathon wouldn’t know what else to do. “I love my job. It’s actually a privilege to work with such talented people,” he says. Jonathon has been active in the industry for 15 years and is the designer on board for Hiccup! He was also one of three artists (alongside Renate Henschke and Chris Edser) who created the artwork for the front cover of this edition of CityMag. A moment of pride in Jonathon’s career was Girl Asleep, which started as a Windmill stage show and became a Windmill film. “I’m very proud of the work that Rose (Myers, Artistic Director at Windmill) and I did on Girl Asleep, it was our first experience with the form of film, and we really immersed ourselves in it, had fun and made some great art.” He describes Hiccup! as a “very fun and slightly mad show” that gave him an opportunity to introduce a young audience to camping in the bush while working in references to The Ferals and The Muppets. Within Adelaide’s arts community “many artists are multidisciplinary and are so capable of moving between roles.” 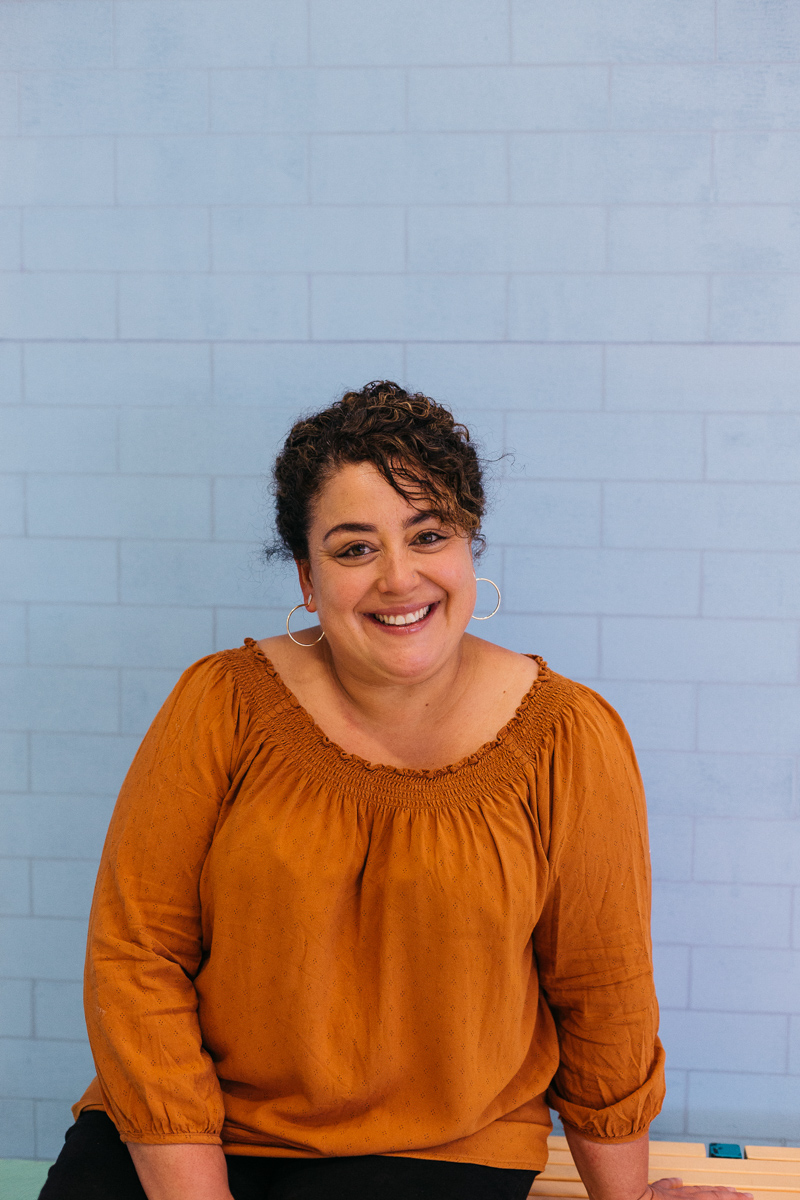 From the end of March, Sasha will be the associate director at Windmill, and will assist the Hiccup! team “through the development and premier season of the work”. She has been in the arts for more than 20 years and loves “being part of an artistic community, sharing diverse stories and experiences, [and] seeing ourselves and each other reflected in the work we create.” She also enjoys “bringing people together for shared experiences.” Sash is proud of her work on the debut season of Windmill’s Amphibian, but a particular moment of pride was her work as executive producer of the opening and closing ceremonies of the 2017 Pacific Mini Games in Vanuatu. Sasha describes Adelaide’s arts community as “small, interconnected, supportive and a great place to incubate new ideas and create new work,” and she loves working at Windmill for the way it allows her to make “the best work and artistic experiences possible for young audiences, their families, teachers and communities.” 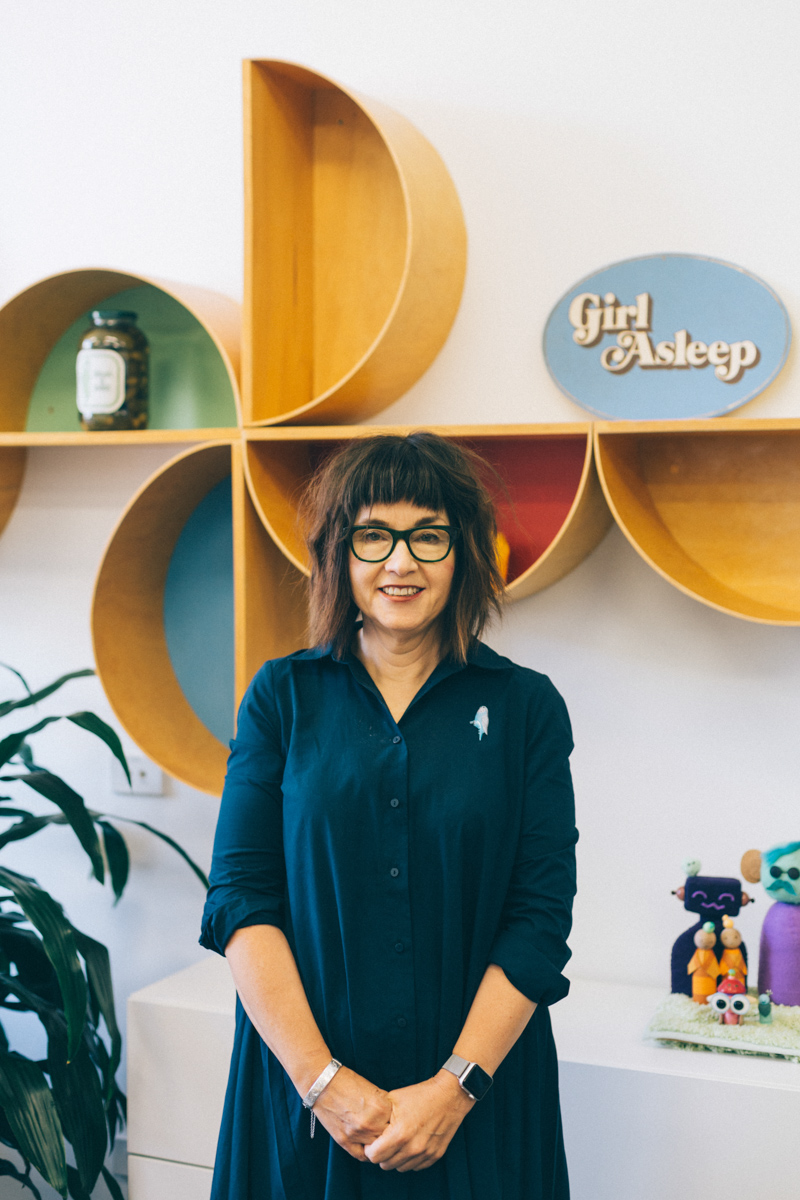 Rose is the artistic director at Windmill and has spent 33 years in the arts industry. She says the arts, storytelling and entertainment are “important to the way we understand and unpack the world.” The industry here in South Australia is “an amazing, inventive and very unique arts community,” Rose says, “and we are so lucky to be well supported by the SA government who really recognise the value of the arts to the identity of SA and to the SA community.” A high point in her career was taking the film version of Girl Asleep overseas to Berlinale’s Generation Kplus, where she and several of her collaborators on the project (including her two sons) spent eight days sharing the film with an international audience. For Rose, working in the arts means forging “fantastic friendships and often lots of new ideas”, and she loves the collaborative way the Windmill team works. 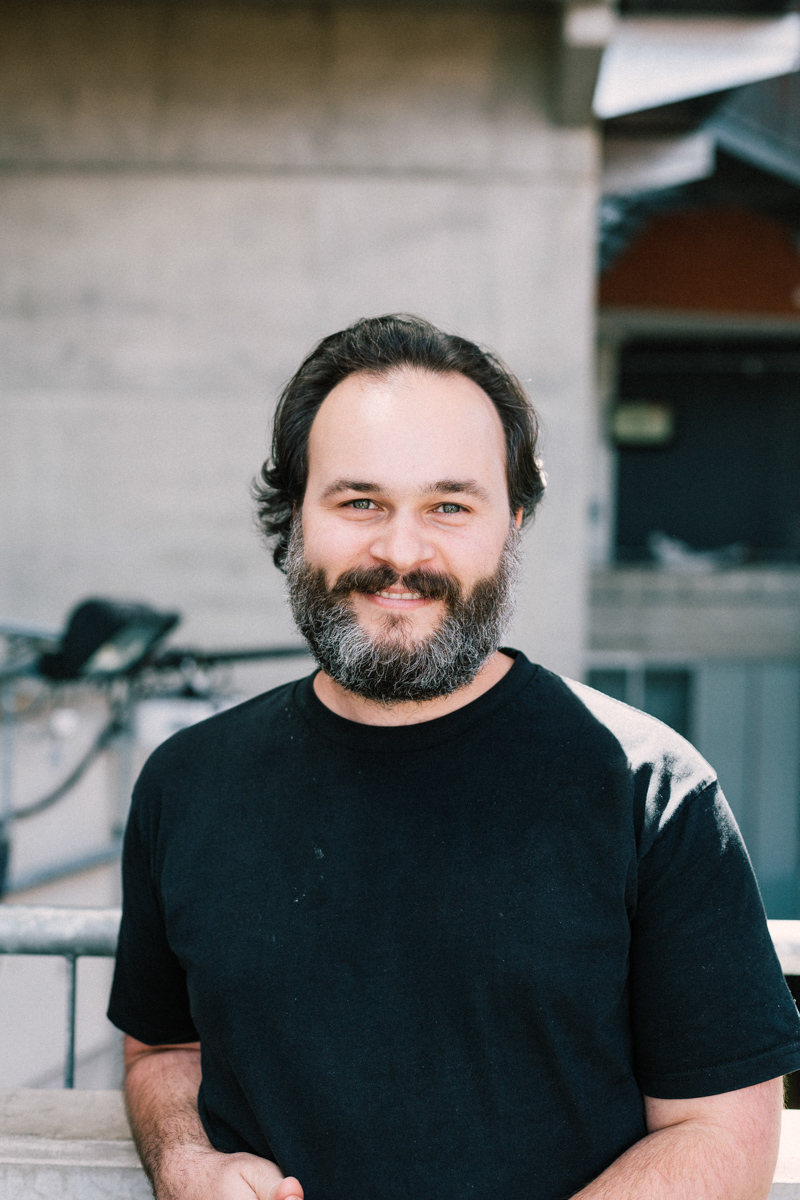 You hopefully won’t see Chris on stage during a performance, but his work as a lighting designer is integral to the audience’s experience of the show. He will help “determine what lights, colours and effects are used to help guide the intended audience feeling or energy in each moment of the play,” as well as keeping the performers well-lit. Chris loves exploring the creative practice of trying to “elicit feeling in audiences”, he says, and working with Windmill means there is “the constant challenge and rigor and knowing that I can always improve”. Reuniting in a creative team feels like Christmas, Chris says. He’s excited to be working on Hiccup! for the opportunity to create a “new piece of Australiana” that uses “psychedelic rock lighting in the context of a show for young people” to represent “the Australian bush on stage at the best times of day: sunset and night”. Despite not being able to create theatre for most of 2020 due to the pandemic, Chris’s greatest ever creation came last year: his son Gideon.