Whether intended as a rite of passage, evidence of allegiance, or purely as art, tattoos have traditionally acted as a form of self-imposed exile from mainstream Western culture. From atop the tattooist’s chair, Benjamin Brooker explores the meaning of marking yourself in the modern age.

Kyle Woodman tattoos me at XO L’Avant, a studio established in 2015 at The Mill where Kyle has been practicing for three years. Once associated with criminals, subversives, and membership of underground gangs and subcultures, tattooing has become increasingly popular and visible in recent years. Around one in five Australians have one or more tattoos while, according to one study, as many as 33 per cent of women in their 20s have been inked. 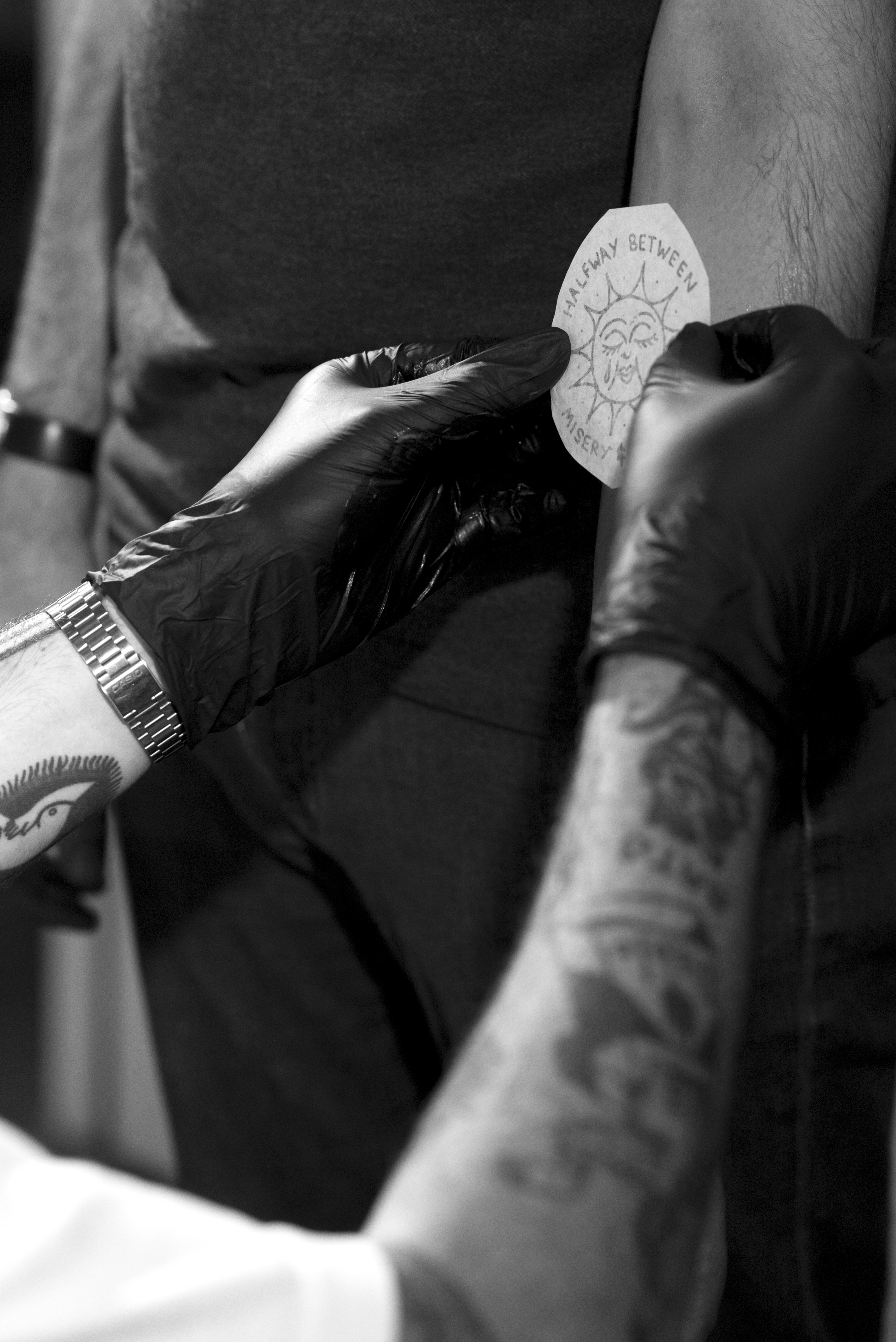 Kyle applies a stencil before beginning the tattoo, my second. The image, drawn in the tattooist’s distinctive ‘ignorant’ style, combines an original illustration and text by the French writer Albert Camus.

“I like stuff that’s a bit more fun, a bit looser,” Kyle tells me. “I used to use an iPad a lot. It improved my work but I came back to hand-drawing, which has more of an old feel, more character.”

The full quote reads: ‘To correct a natural indifference I was placed halfway between misery and the sun. Misery kept me from believing that all is well in this world and with history; the sun taught me that history isn’t everything.’

Some tattooists use a traditional method called stick and poke while others employ an electric machine or ‘gun’ of the type seen here, which have been around since the 1890s. Tattoo ink may contain animal byproducts such as glycerin, shellac, or gelatin, but Kyle uses one that is vegan.

One Ancient Roman recipe for tattoo ink contains pine wood bark, vinegar, and insect egg deposits. In traditional Samoan society, where tattoos act as markers of status, ink was applied with a comb (au) made from animal teeth and shell, a practice that survived despite attempts by Christian missionaries to suppress it.

Historically, tattoos have been signifiers of group belonging and personal achievement – or notoriety, as in the case of the Russian criminals so memorably documented by Arkady Bronnikov.

As ‘life-markers’ such as christenings and marriages disappear from our lives, one hypothesis goes, we are drawn to tattoos to mark and make sense of life events, relationships, and the self (without each other’s knowledge, my ex and I both got our first tattoos shortly after breaking up last year).

Kyle believes social media has supercharged the public’s interest in tattoos as a form of self-expression, highlighting the work of individual artists and providing a platform for celebrities to flaunt their latest ink to followers numbering in the tens of thousands or millions. But I wonder if the surge of interest in tattoos is, at least in part, a response against the increasing digitisation of our lives, grounding us within older, embodied forms of meaning-making.

Aftercare begins as soon as the tattoo, which is in effect an open wound for several days, is finished.

Before being inked for the first time I shared the common belief that tattooing must be highly painful. As it turns out, as long as you’re only getting line work done and not in an especially sensitive area such as the wrists, feet, or stomach, I don’t think it’s as bad as all that (imagine a fingernail or blunt pencil end, warmed to slightly above room temperature, tracking firmly but far from unendurably across your skin). According to Kyle, women are generally more tolerant of the pain than men.

Despite the seeming gentrification of tattooing in the West, it remains more common among the less educated, and continues to correlate with activities, such as illicit drug use and casual sex, that are disapproved of by mainstream society.

A 2012 study published in Annals of Epidemiology found that men who had been diagnosed with depression were 1.3 times more likely to have been tattooed than men who had not. Perhaps tattoos are not yet ready to give away their long-held role as signifiers of the marginalised and outcast, proofs of lives defiantly lived.