Through bringing an Adelaide Fringe show and Writers SA workshop to the South East, poet Caroline Reid is helping build a new generation of regional writers. 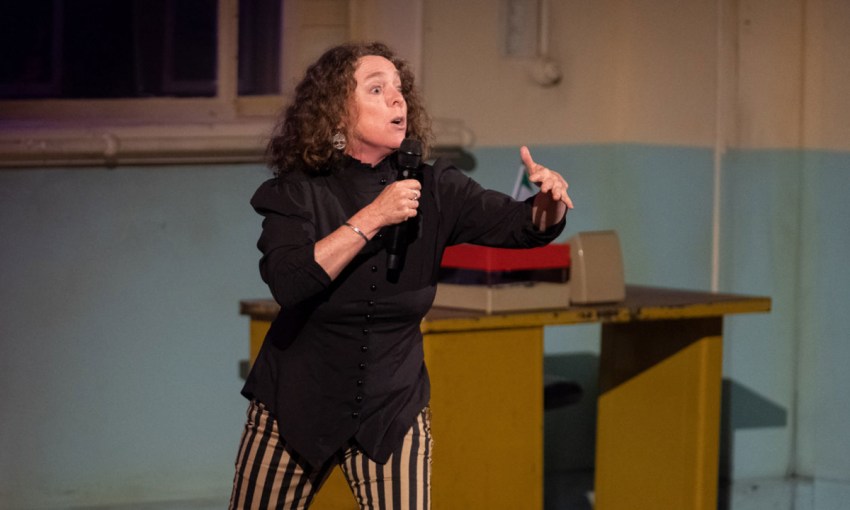 Caroline Reid became a poet almost by accident, after spying a poster for the Australian Poetry Slam while doing a residency at Writers SA in 2016.

“Every day I was walking past [this] fucking poster that said, ‘Australian Poetry Slam!’, and it was just in my face every day… so I went into the first heat,” she says. “I didn’t get through to the state final… but it was such a buzz.”

That was in 2016, and since then Caroline has become a regular fixture in South Australia’s poetry scene. She published a book of her work, Siarad (Welsh for ‘speak’), which she has turned into a one woman show.

This March, she’s bringing the performance to Mount Gambier, as part of the Fringe Festival.

“I grew up in the country in Western Australia, so I really know the value of artists coming to town… There was really nothing back then,” she says.

“There was certainly no poetry writing workshops and no poet came to town. So, I’m really excited to get out into the regions. I’ve been wanting to get out to those areas for a while, and I’m hoping it’s the first of many visits.”

Part of the reason Caroline developed the play was for the challenge of taking Siarad from the page to the stage.

The book is a collection of stories of migration, caring for her mother with dementia, and musings on life and love. The play, which has changed significantly since its first run in last year’s Fringe, brought narrative structure to the work, created with the aid of dramaturge and director Steven Sheehan.

“It was always about diversity of practice,” Caroline says. “How many ways could I present the same material?”

In addition to her performance, Caroline will host a poetry workshop on 27 March at the Sir Robert Helpmann Theatre in Mount Gambier, where she will encourage beginner poets and those finding their poetic voice to explore personal stories through spoken word. The workshop will include writing exercises and demonstrate techniques, tips and tricks of the trade.

The event is part of a series run by Writers SA in Mount Gambier and Naracoorte for the organisation’s Young Regional Writers program. Through the program, Writers SA aims to encourage artists to connect with their peers and create industry pathways for young writers in the area.

“I called the workshop Poetry Belongs to All of Us because I think people still have a really old idea of what poetry is – I know I did,” Caroline says.

“That sort of poetry – dead, white, male poetry – it’s exclusive, it excludes. Spoken word invites everyone to get up and tell stories. It’s very egalitarian in that sense.”

Having worked as a professional performance poet for almost five years, Caroline has some advice for new writers looking to hone their craft.

“Work with someone – not a mentor, a friend,” she says.

“One of the things I’ve done in the past is grab a book of writing exercises, my friend has done the same, we’ve gone to a space and picked a writing exercise for each other. Set a time limit. Get rid of that thinking, editor brain. See what you come up with, and just read it to each other.”

Other events running on the Limestone Coast this Fringe season include For the Love of Words and Wine, a poetry slam and open mic held on Saturday, 12 March, at the Wild Game Wine in Naracoorte. This event coincides with the Naracoorte Fringe Street Party in the town square on Smith Street.

For budding creatives, it’s a weekend not to be missed.

Details about the Caroline’s performance and workshop and other regional events can be found on the Writers SA website.