Pastels, darkness and the loss of innocence

In a work consisting of 100 pastel-coloured longneck beer bottles, visual artist Ellis Moseley examines South Australia's loss of innocence in the '70s and '80s and the uneven distribution of justice between rich and poor. 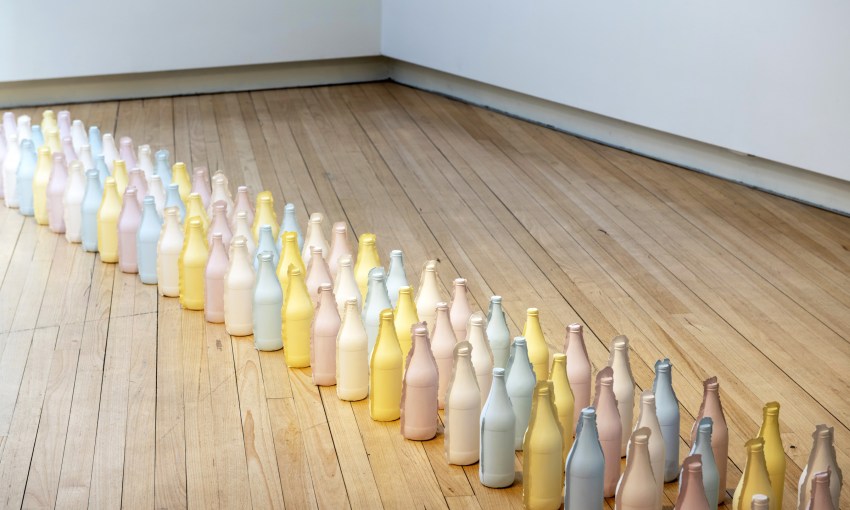 Ceramicist Ellis Moseley grew up in what he describes as a poor, immigrant family in the northern suburbs of metropolitan Adelaide.

When he was eight years old, in the ‘70s, Ellis tells CityMag there was a seismic shift in the neighbourhood and South Australia’s identity. This moment has served as inspiration for a recent work, which will soon be available for the public to view.

Ellis is one of 22 artists exhibited in the Helpmann Academy’s Graduate Exhibition, which launches on Friday, 29 January, at ACE Open on North Terrace. The artists are those the Helpmann Academy considers to be the next generation of SA’s contemporary creative voices.

Ellis’ exhibited work is titled Super Duper Flying Fun Show, made up of 100 multi-coloured ceramic bottles. Ellis says the longnecks are “sherbet and Fruit Tingle” colours to evoke a sense of innocence in the viewer.

The use of the longneck beer bottle shape is a reference to the ‘70s, and is meant to represent the loss of innocence when a young boy is given a drink for the first time.

Despite its colourful palette, the deeper we dive into the meaning of Super Duper Flying Fun Show, the more sinister layers we find.

The piece, Ellis says, is meant to be a springboard into a particularly dark period of the state’s history, and a turning point in Ellis’ upbringing – that seismic shift in the ’70s.

“A lot of children’s lives was characterised by freedom of the streets, to play and to go out,” Ellis says. “But when [The Family Murders] came about, there was a real shift.

“The title [of the work] is an entree into the difficult subject matter, which is looking at the violent abuse of young boys from the mid-’70s to the early-’80s, characterised by some significant events in SA.

“I think it changed our society in a way that people have withdrawn from the streets, communities diminished. It was seriously injured.”

The Super Duper Flying Fun Show was a Nine Network children’s TV program which aired from 1970-79 with Ric Marshall as a host. In 2012 the presenter was convicted of the repeated sexual abuse of four boys.

The number of ceramic bottles fired for the series represents the number of murder, kidnapping and drugging victims thought to be associated with The Family murders.

Only one conviction has been made relating to the murders many people attribute to this alleged group. Bevan Spencer von Einem was found guilty in 1984 of the brutal murder of 15-year-old Richard Kelvin, son of Channel 9 newsreader Rob Kelvin. Police believe a larger group is likely to have been involved in the crime, and the case is still listed as unsolved on the Crime Stoppers South Australia website.

“What happened there would not have happened anywhere else because when people go missing in Burnside that’s unusual – because rich people don’t go missing. Offending could have continued far longer than it should have with proper and serious policing, but that’s just not what you get.”

I wanted to just make a work that is there, acknowledges that period of time, quietly 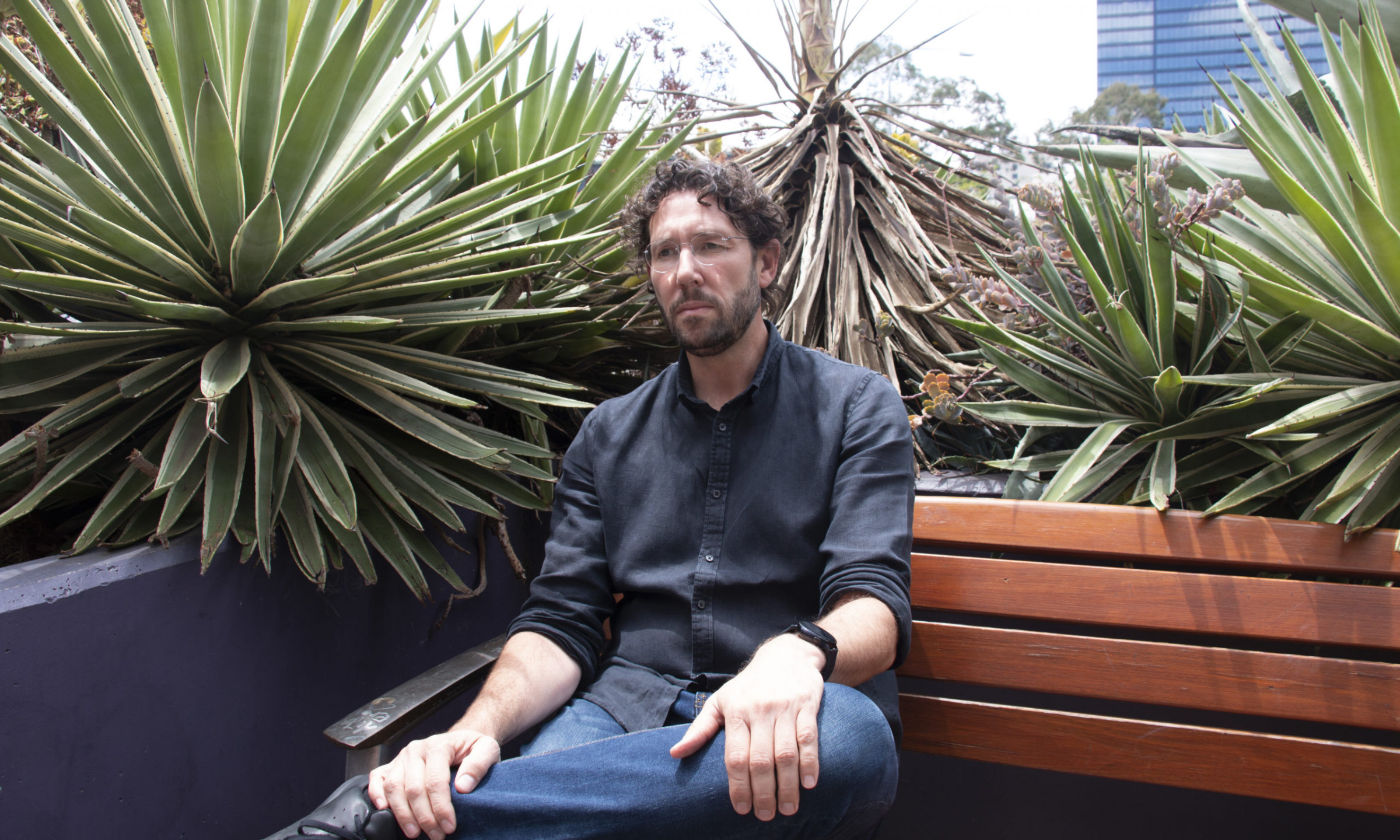 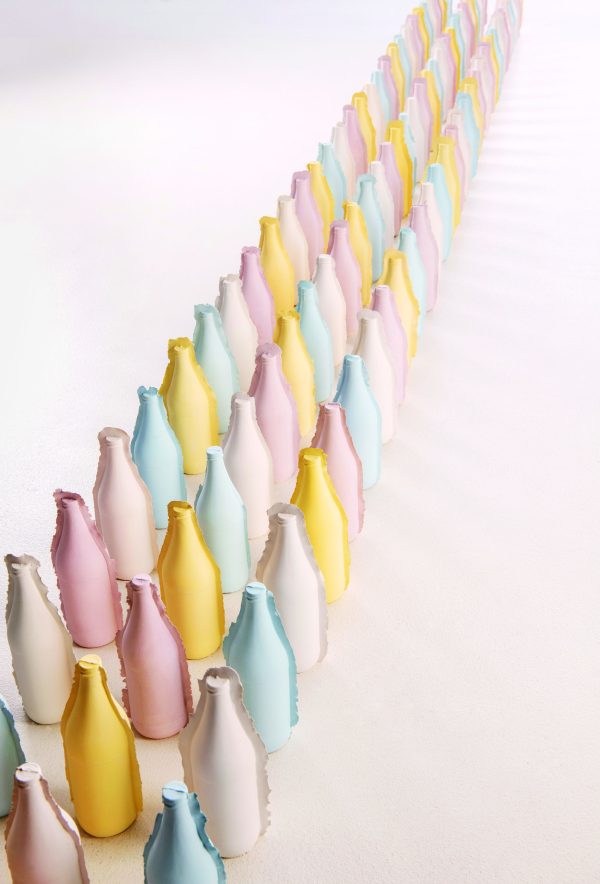 Ellis says he initially had the idea for the series years ago, and floated it amongst some people he knew in SA. They immediately challenged the idea, Ellis says, believing they feared they would be once-again be associated with the resuscitated crimes. But instead of Super Duper Flying Fun Show glamorising those perpetrated the crimes, he wanted to offer kindness to the victims.

“I wanted to just make a work that is there, acknowledges that period of time, quietly, that just says, ‘This is still here Adelaide, you can’t just forget these things.’”

South Australia has long been a focus of Ellis’ work, often using South Australian idiosyncrasies as a method of capturing and communicating the state’s identity.

Five years ago, he co-curated an exhibition where politicians, artists and other identities designed their own iconic Frog Cake dessert, and before that he created a ceramic version of a bikini girl massage parlour.

Ellis says he’s interested in the state’s stories because despite, us having the reputation of “everyone knows everyone and a lot about each other”, there has been little done about those infamous deaths.

“Stuff gets covered up and it’s difficult to penetrate,” he says.

Making the Super Duper Flying Fun Show has left a heavy mark on the artist, who says dealing with the subject matter, and researching, reading and speaking to those with any knowledge of the cases, was “personally quite tumultuous”.

Despite not having any close relationships to the victims or survivors, Ellis says this period in SA is “still an open wound”, one which we’re still haven’t properly dealt with yet.

If this story raised issues for you, you can reach LifeLine 24 hours a day seven days a week by dialling 13 11 14. Beyond Blue and headspace are other national organisations offering comprehensive mental health support.