The behind-the-scenes crew that make The Garden tick

Fringe crowds come to The Garden of Unearthly Delights for its programming and for the energetic ambience found beneath its twinkling festoon lighting. We wanted to get to know the place a little better, so we went backstage to meet a few of the Garden's makers.

The Garden of Unearthly Delights is, perhaps, the most well-known non-permanent fixture in our city – a hive of activity that feels as familiar as any other major landmark in Adelaide.

Each year, over the five weeks of the Fringe, we’ll cut a dozen or so laps around the activated piece of Parklands, measuring out the most convenient spot to sit and watch the crowd while waiting for a show to start.

Despite this familiarity, though, there’s an entire ecosystem of people hidden in tents and behind food stalls keeping the show going who we rarely get to meet.

This week, CityMag headed into the Garden on a sunny afternoon, before the gates opened to the public, to meet some of the Garden folk who make the whole thing tick. 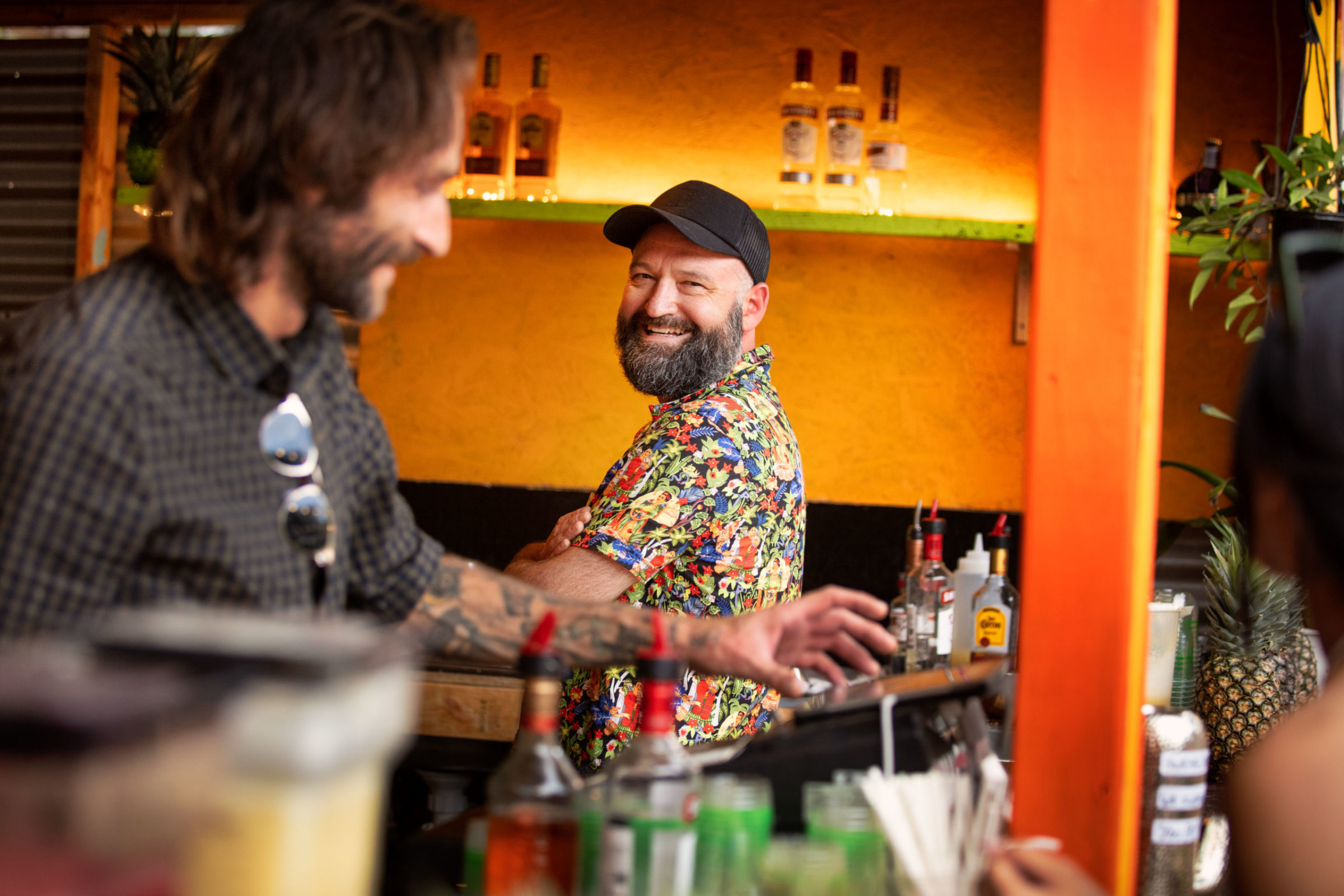 The Pineapple Brothers bar is one of the most popular places in the Garden to grab a drink and have a dance. What many people might not know is that the man pouring the rum and juice is also responsible for building every structure in The Garden of Unearthly Delights.

As Build Site Manager, Bo Haldane is responsible for taking the plan for the site and making it a reality.

“My role is to oversee the build of the event from the very beginning,” says Bo.

“I work with every department to help mark everything up and make sure the site design and layout is correct to the plan.”

Each year, Bo brings about 80 shipping containers into the park and, for two weeks before the Garden opens, runs the contractors and manages the build of every venue, vendor, office and toilet. Those containers stay on site for the entirety of the festival, cleverly repurposed as storage facilities, partitions and parts of venues.

A 15-year veteran of the arts industry, Bo returns to Adelaide every year from his home in the Grampians because of what he sees as the values behind the Garden.

At the end of the festival, it’s also Bo’s job to leave the park how he found it.

“Everything here gets packed up into a container and is recycled and reused,” says Bo.

“All the shops and all the bars and everything that is built we pack it up, de-nail it, and it goes into five containers of timber and tin.

“The wood (on the Pineapple Brothers dance floor) – this is the fifth year it’s been used.

“When we are packing every container, we keep an inventory so we can build it again next year in the right order.” 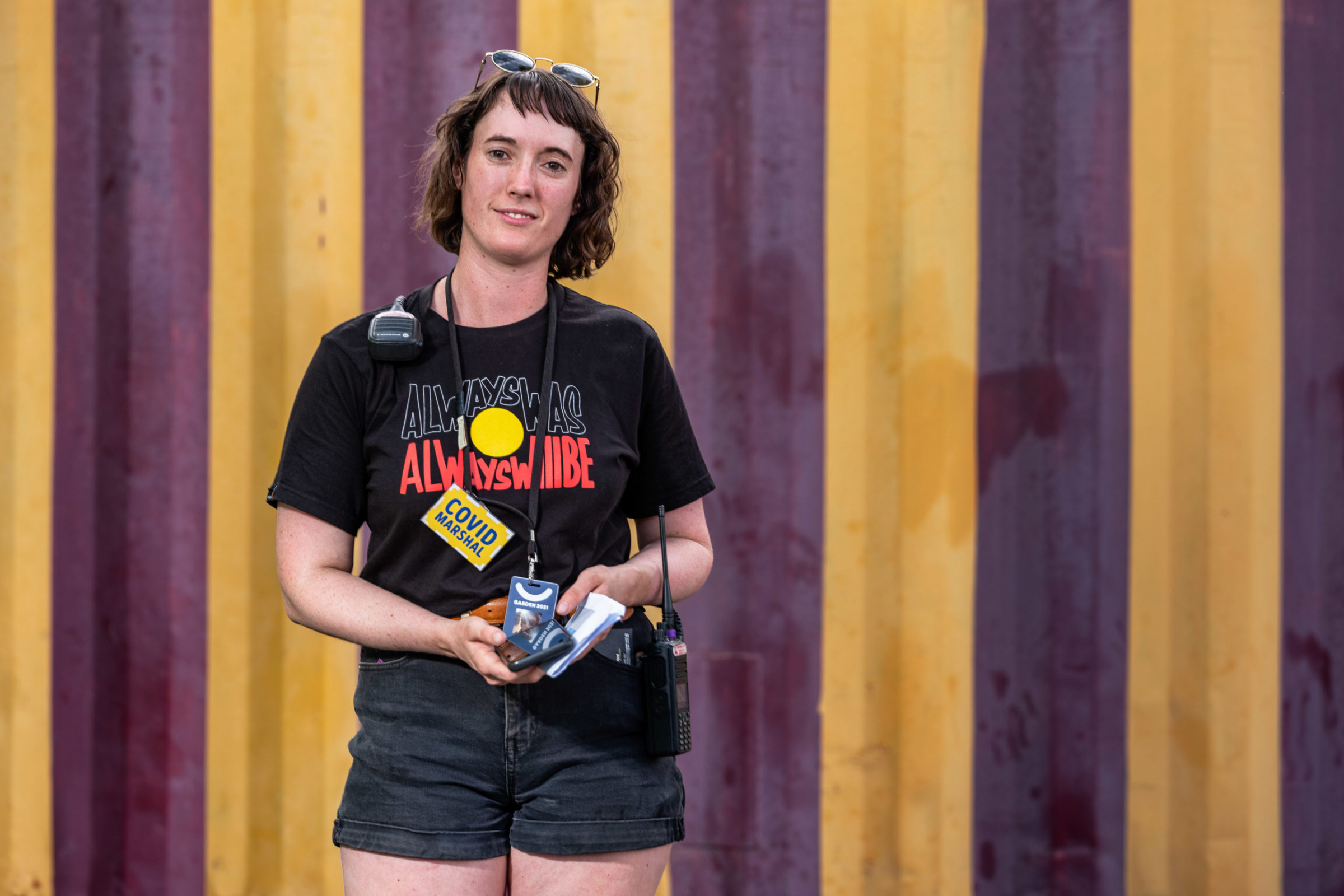 As Venues and Production Manager for the Garden, Alison Neville is responsible for making Fringe artists look, and sound, amazing.

With this year’s COVID-adapted festival featuring four larger venues, she’s running a pared-back tech team of about 10 people, as well as being responsible for working with Bo to build the tents and ensuring venues have all the technical requirements artists need.

Alison’s training started early with circus school in Albury–Wodonga, before landing her first production job at a local theatre at age 15.

She now works at festivals around the world – or at least she did before 2020. This is the first fringe she’s worked since last year in the Garden.

“It’s really great having the Adelaide Fringe back,” Alison says.

“The industry has been pretty decimated. But the pandemic has created a really lovely vibe with the artists and with the technicians and with everyone that’s working within the venues… There’s this gratefulness that everyone has that they are really happy to be here and really happy to be able to work in the arts again.”

Alison says it can be exhausting work and that there’s always some surprises each year – the other day she had to evict a family of ducks from a venue before a show. But she loves what she does and loves the family atmosphere in the Garden.

“I just love all the people that I get to come back and see every year… if you’ve worked here I think you have a bit of a love for it and a connection to it.” 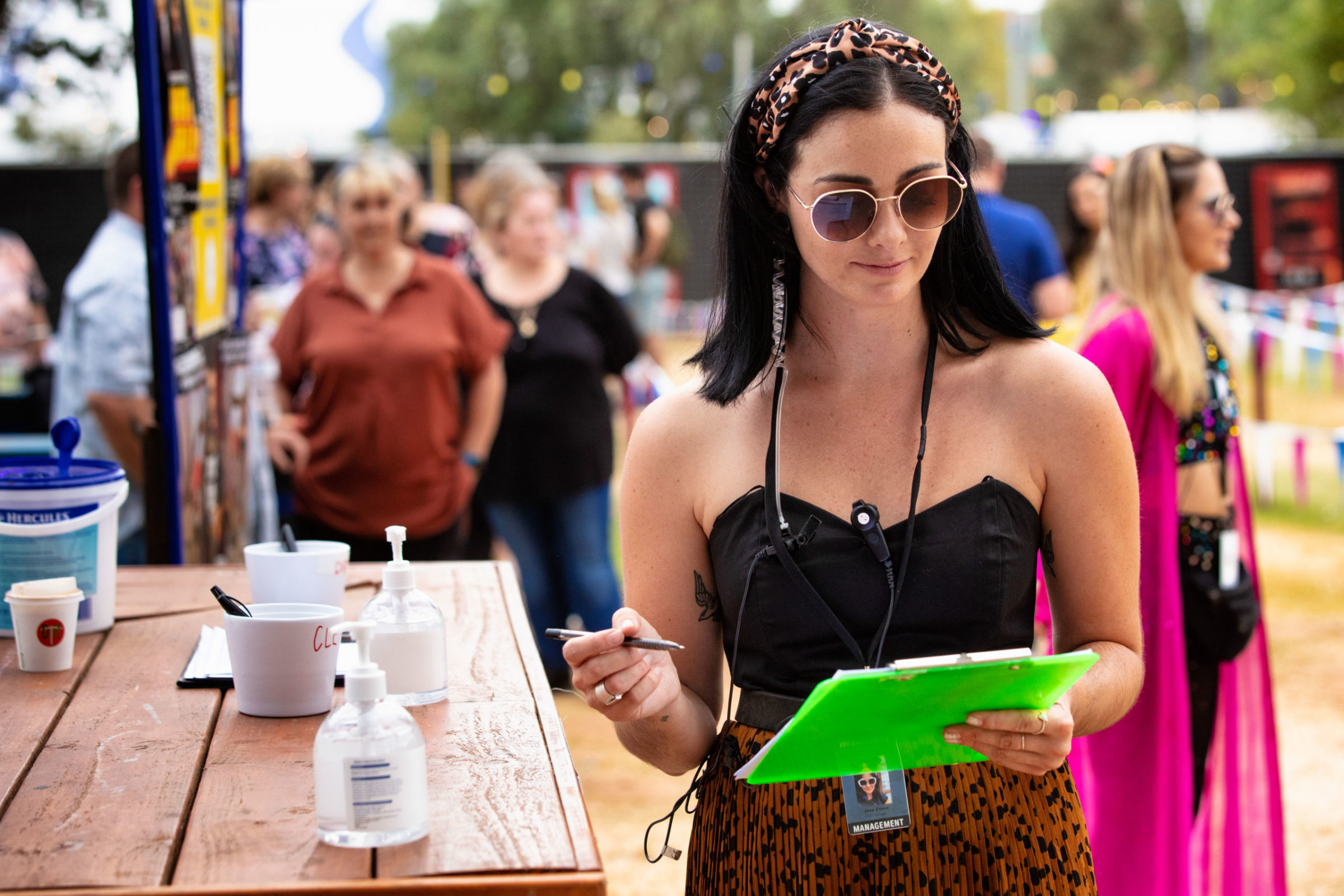 Each year, hundreds of shows attract hundreds of thousands of people to the Garden, and it’s Jess Copas’ job to seamlessly get those audiences into and out of venues.

This year Jess is managing a team of about 40, staffing the front gate and all of the venues and overseeing the scanning of tickets, queueing and seating.

That team is usually made up of people from all over the world who come to Adelaide to gain more festival experience. This year, of course, it’s made up mostly of locals.

Jess, who’s a New Zealander, cut her teeth volunteering at small festivals in Auckland, before coming to Australia in search of experience at bigger events. She worked her way up to manage venues at the Melbourne International film and comedy festivals, before meeting Garden Director Scott Maidment and joining the Garden team.

“Scott said ‘Could you please stop working for other festivals because we’d like to take you full-time’,” says Jess.

“It’s really cheesy but I love my festival family – everyone in Adelaide and also everyone that travels – you get to spend this really intense month with your festival family… and you’re working really long hours and working really hard, but the payoff is huge because… [of] the platform we deliver for audiences and for artists to come and perform.”

Illuminate Adelaide unveils plans to light up the city

Style Sample: The end of summer