Pain on canvas: A portrayal of endometriosis

Adelaide artist Ellie Kammer's oil painting and charcoal portrayals of life with endometriosis are broadening awareness and understanding of the often debilitating condition.

Ellie Kammer’s art offers an immediate and visceral understanding of the reality of living with endometriosis.

The Adelaide artist works in the mediums of oil paint and charcoal, and many of her pieces are informed by her own “personal and volatile” relationship with endometriosis, which she was diagnosed with in 2015.

“I now paint about women’s health issues because almost every woman I know suffers silently and I’m over that,” says Ellie. 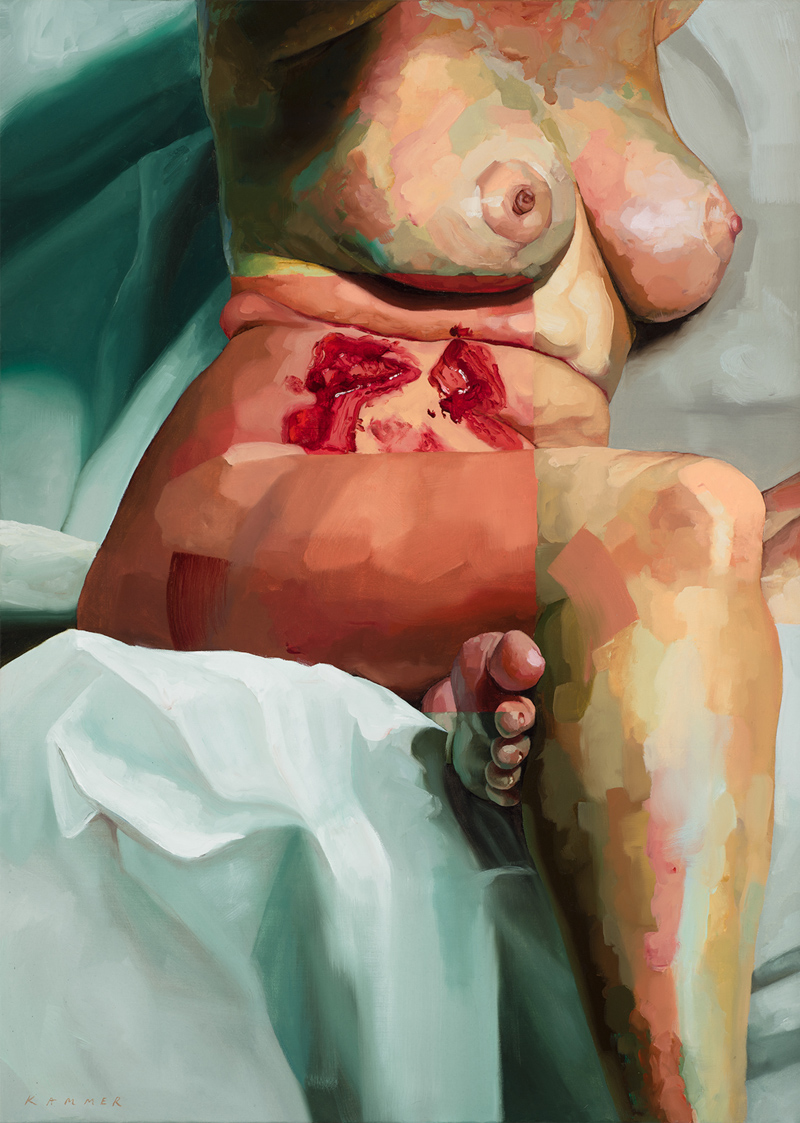 “Gender inequality is a crisis and affects everything. Devastatingly, its existence within the health system means that I and millions of other women are oppressed and ignored and everything we go through is put down to the menstrual cycle, as if simply declaring that our periods are making us sick is enough.

“[Endometriosis] is one of the most misunderstood and overlooked conditions there is and it has ruined many lives. I have stage 2, which is a moderate stage, but interestingly that has no bearing on how severe my symptoms are. There is no correlation between severity of condition and intensity or frequency of symptoms.

“This is problematic because it’s hard enough for people to understand what we’re going through as it is, but with women in our own community experiencing little or no symptoms, the fight for the rest of us to be heard becomes even greater,” she says.

Ellie has had significant success in translating this explicit message implicitly through her art.

In October 2017, her portrait of actor, writer, and fellow endometriosis sufferer, Lena Dunham attracted global attention. The work, entitled Property of Lena, was shared on the actor’s social media, putting the disease under an international spotlight. In November 2017, the portrait was auctioned with all profits going to Endometriosis Australia.

The impact of Ellie’s work is seen closer to home as well.

“There isn’t one person in my life who doesn’t now understand endometriosis a little better, and people actually ask me how I’m doing using the word ‘endo’,” says Ellie.

“That’s incredible. Before I was diagnosed I’d never heard of the word and neither had anyone in my circles. My work is injecting the word endometriosis into conversations. People are asking questions and Googling it. That’s the first step.”

Late in 2017, Ellie was announced as the winner of the Myself Prize – a national acquisitive prize for self portraiture.

“Once we all know who it’s affecting and the devastation it’s causing, we will make a concerted effort to understand the disease and work to eliminate it or at least find solutions to make life a little easier for its millions of hosts,” she says.

Ellie currently has some of her work on display at the ‘works on paper’ group show at Scott Livesey Galleries in Armadale, Victoria. But back in the studio, she’s working on something of a far bigger scale – a portrait of an Australian actress and activist (who at this stage cannot be named) for the Archibald Prize.

With her track record as it stands, we trust we’ll be seeing plenty more of Ellie’s work in art and activism in the near future.