Did young people just beat the government at its own vaccine game?

How young South Australians came to be able to book Pfizer appointments is a story, told through tweets, about a government eating its words and the power of viral information in the hands of a desperate demographic left at the bottom of the vax priority list. 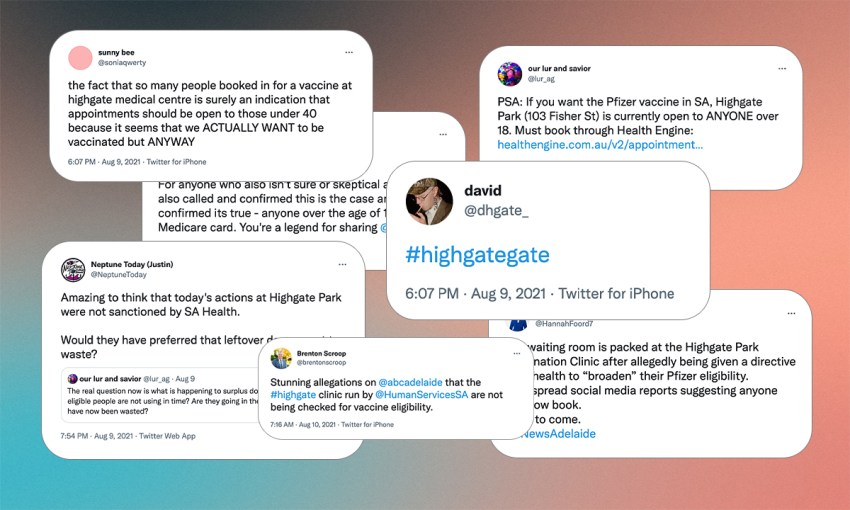 Through a social media firestorm on Monday, 9 August, news travelled fast about a mass vaccination hub for aged- and disability-care workers in South Australia allegedly opening up hundreds of Pfizer vaccine appointments to anyone under the age of 40.

PSA: If you want the Pfizer vaccine in SA, Highgate Park (103 Fisher St) is currently open to ANYONE over 18. Must book through Health Engine: https://t.co/fAF9RlCmHF

How these appointments materialised for the masses remains unclear, but Twitter and Instagram rumours suggest a mix of slow uptake by care workers and theories surrounding vaccine “waste”.

Social media users reported they’d called the clinic themselves to confirm the news. Workers at the vaccination hub reportedly told them to believe the hype.

Buoyed, I immediately booked, and spread the news as wide as I could, texting family, friends, enemies, strangers, pets. ‘We’re finally getting out of here,’ I thought for three beautiful hours, revelling in the notion of impending freedom.

But by the afternoon, my hopes were dashed whence they came – through another Twitter report.

According to a statement announced via SA Human Services’ Twitter account, the vaccine bookings were a hiccup. All appointments made outside this week would be not be honoured.

I cried on my way home. For a moment I had an opportunity to get out of this coronavirus mess and not live riddled with worry.

SA Health says they have in NO WAY given direction for the clinic to give Pfizer doses to anyone other than aged care & disability workers.

The AstraZeneca vaccine has been an option for my age bracket for a long time, but the Federal Government’s Australian Technical Advisory Group on Immunisation (ATAGI) has highlighted the risk of developing Thrombosis and Thrombocytopenia Syndrome (TTS) from this vaccine for people like me.

“ATAGI advises that, for people aged under 60 years, the COVID-19 vaccine Comirnaty (Pfizer) is preferred over COVID-19 Vaccine AstraZeneca,” the body recently said.

They recommend those who want this vaccine to weigh up the potential benefits against risk of harm from COVID-19, such as whether you’re in a state that is actively battling a high number of cases.

In a stunning turn of events, however, SA Premier Steven Marshall announced at a press conference on Thursday, 19 August, that “it’s a good day for South Australians.”

He confirmed the news foreshadowed on ABC Radio Adelaide this morning, that from Monday next week anyone “over the age of 16 can get vaccinated”.

That’s right: from Monday, all South Australians aged between 16 and 40 will be eligible to book a Pfizer vaccination appointment at any state-run clinic.

At 8:15am today, before the news filtered through the media, I received a text thanking me for booking my initial Pfizer vaccination appointment at Highgate Park Clinic. “Your current booking is now CONFIRMED at this clinic,” it said.

Not only do I have one Pfizer vaccine appointment, but my second appointment was valid, too.

Chief Public Health Officer Nicola Spurrier said today that after the recent Highgate bungle, “the good news for me is that a lot of young people want to get vaccinated.”

Young South Australians who were recommended to approach AstraZeneca with caution were gifted with a safer alternative (according to ATAGI). But how did the desperation for one specific vaccine, now so evident to Professor Spurrier and the State Government, grow amongst my peers?

As a 26-year-old with a job, no underlying health issues, and no mortgage to pay, my life during the coronavirus pandemic has remained relatively unscathed. But there remains a fog cast over my future; I, like everyone else, don’t know when this medical disaster is going to end.

For some of my interstate friends, and even younger cousins who live in South Australia, the mental health toll has been a different story altogether.

What was meant to be my cousin’s first year on campus at university, a moment in which new identities and friendships are formed, instead became a daily, hours-long interaction with a laptop. For months last year, and a week this year, he was asked to lock down and sacrifice new experiences for the better health of the public.

Albeit on a shorter scale than our eastern seaboard neighbours, he did what needed to be done.

In 2020, rates of confirmed COVID-19 cases among people aged 20—29 were “higher than all other aged groups”, except for those 85 years and older, the Australian Institute of Health and Welfare (AIFW) outlines in a report that explored the virus’ impact on young people.

Then there were the associated mental health implications occurring in that same demographic.

We know from our own reporting that the mental health impact of the coronavirus is ongoing.

While the elderly experience the worst health impacts of the coronavirus, some argue young Australians have been hit hardest by the economic and physiological reality of the pandemic response, due to lost work, lost rites of passages, and social isolation.

The Australian Government’s COVID-19 national vaccine rollout strategy, released at the beginning of the year, was divided into five phases, with high-risk groups — such as workers in quarantine, on the border, and in the aged- and disability-care sectors — prioritised to receive up to 1.4 million Pfizer doses in the first phase, commencing in February 2021.

The South Australian Government’s own COVID-19 vaccination ambitions, made public in January this year, mirrors the Federal Government’s goals.

The second phase, expected to commence in March, was for 14.8 million Pfizer and AstraZeneca vaccinations to be distributed to people aged 60 and older, those aged under 60 with underlying medical conditions, and other at-risk groups.

The “general population” was set to receive access to both vaccines in the third phase, expected to commence in May. Three months ago.

Up until the beginning of this week, AstraZeneca was the only option available to all, but locals lagged in rolling up their sleeves.

New from me: we’re seeing a surge in vaccinations of people aged between 16 and 39, but it’s concentrated to New South Wales and Victoria, the two states which have done most to make AstraZeneca more accessible and convenient https://t.co/RG4jiRPpwG pic.twitter.com/XUDRZqywbt

Although you’re more likely to be struck by a bolt of lightning than die from a case of TTS associated with the AstraZeneca vaccine, some Australians are hesitant. This includes me.

Every time I considered booking a consultation with my GP – the legislative hoop I’m required to jump through to ensure I can’t hold the government accountable if I develop a blood clot – I freeze. What if I was one of the unlucky ones? Also – why expose myself to this risk when South Australia has performed quite well in controlling the spread of the virus?

At a masked dance-less event over the weekend, a friend put my argument to me another way: Why go swimming with sharks when you can comfortably sit onshore?

I’m glad to now not need to sit with this hypothetical situation, or the very real inner debate I’ve had about whether or not to go with a vaccine I don’t trust.

There are still questions unanswered in the events of the last week. What was it exactly that inspired the South Australian government to finally invite young people to the Pfizer party? Why is it that many in at-risk groups included in that first January phase have still not been vaccinated yet?

Whatever the answer, I’m happy to now exist in the comfort of knowing that in just over a month’s time, my risk of infecting friends, family and strangers, and becoming a link in the chain of another future coronavirus outbreak, will be significantly reduced.

Thank god for the Highgate hiccup.

Had my first dose of Pfizer yesterday due to the ‘glitch’ at Highgate Park, which now sounds like it was a test run.

Was so good to see such a large number of ppl under 40 getting their vax.