Not even the internet could kill Clinic116

Underground hip hop and street culture store Clinic116 is celebrating its 20th birthday, but the store was almost wiped out with the rise of the world wide web. A new guard of ownership wants to bolster it's relevance in a new age.

In Clinic116’s heyday it wasn’t uncommon for rap royalty like Kool Keith and Spice 1 to visit.

Co-founder Justin Squillance stocked his tiny store – originally located in Adelaide Arcade, and then Twin Street – with records, vintage clothes, and spray paint, but often had in-store visits by international and national musicians.

Looking back on two decades, Justin says a highlight for him were the celebrity visits; especially the performance by New York rapper Necro, who filled the shop shoulder-to-shoulder with stoked “grimy” hip-hop heads in Adelaide.

“There was some anxiousness about potential friction between people or whatnot, but everyone was well-behaved,” he laughs. 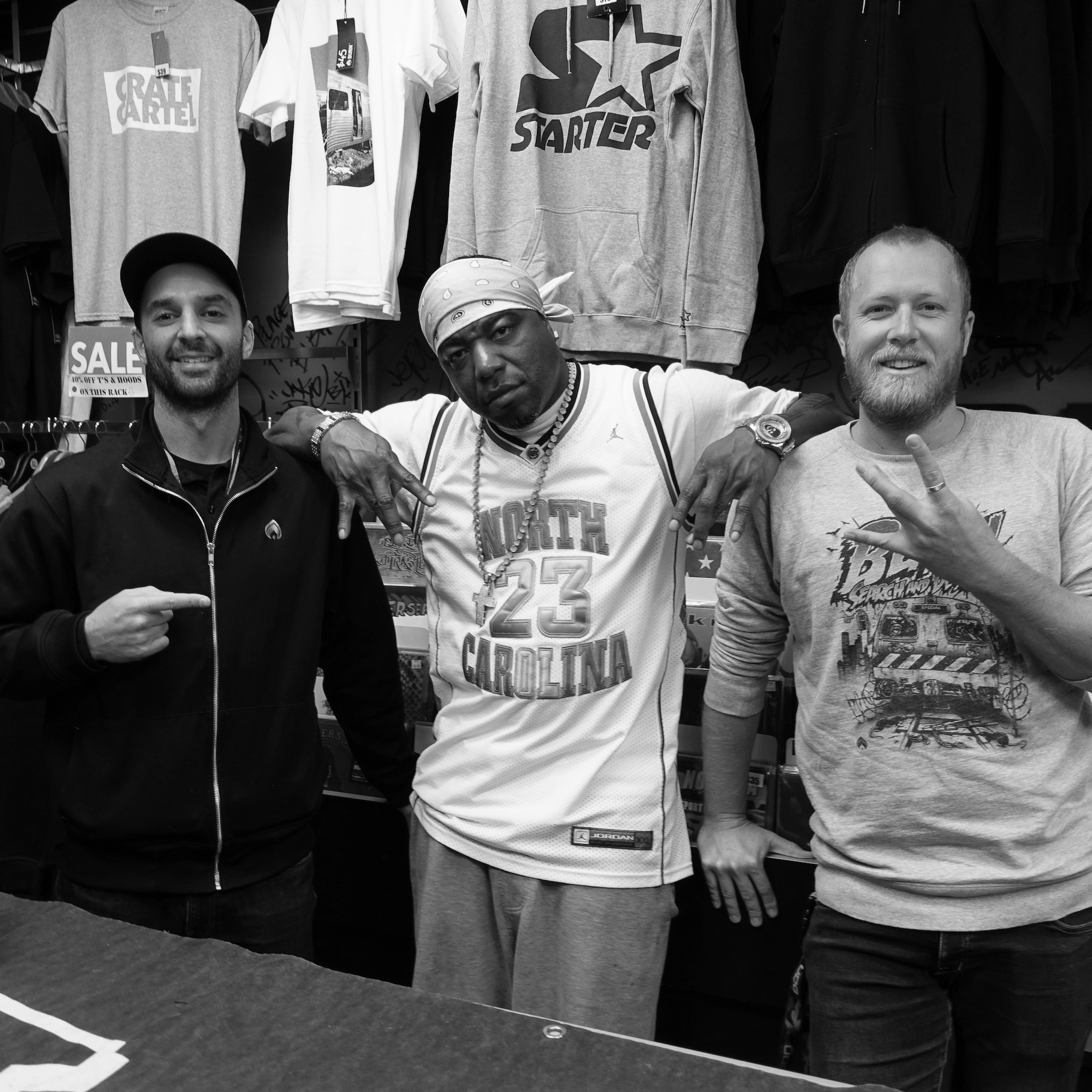 Above: Justin (in the beige flat cap on the right) was stoked with Necro’s 2007 visit; Right: Spice 1 visited in 2015. Both images: Supplied

But the greatest part of owning Clinic116 throughout that time, Justin says, was witnessing Adelaide’s hip hop scene flourish from behind the sales counter.

“Nothing like that will be repeated. It was a fantastic time,” he says.

“It was a golden period for seeing the evolution of the local elements of the music.”

The business was titled Clinic116 because it was located at no. 116 in the Arcade and was meant to give kids their “fix,” Justin says.

It sold spray paint as well as vinyl and CD releases, tickets for local shows and street culture magazines, plus brightly coloured second-hand sportswear by Vintologists.

Justin says the shop was extremely important in terms of being a “reference point” for those in a community often left in the shadows. It was a hub for meeting new people and those looking to make connections “in the flesh.”

Clinc116’s credibility was bolstered by its fervent support for SA-made musicians and producers.

This video is by Adelaide hip-hop musician PLARKS titled ‘The Collector.’ The YouTube bio thanks Clinic116 for letting them film in store and the “support they have always shown us & the whole Adelaide HipHop scene.”

Adelaide’s rap boy-wonder Nelson Dialect – who is now a New York city resident – previously worked behind the counter, and also stocked one of his first releases, the 2008 Rugged Uncut Project, there, too.

“Hip hop had built a larger profile by 2000 but not locally, which is what separated us from other record stores at the time,” Justin says.

“We had a little bit better focus on the local elements than other [shops] did. Even though it was quite small and fledgling, the scene was slowly building and we supported it.”

With music communities finding a home in the digital realm in the early 2000s, Clinic116 regulars started purchasing gig tickets and albums online. Once streaming came around, Clinic116 started to lose relevance.

Justin believes the reason the shop survived this long was because the internet couldn’t replace those IRL connections.

“People haven’t totally discarded the interactive experience of shopping in the flesh, in the physical,” he explains.

“You can get a message board and talk about all sorts of crazy weird topics, but it’s a bit different to in the flesh when you bump into people.”

Looking for a career change, Justin sold the business to Liam Lovewell and Costa Antoniou in July.

Justin says he wants to move his passion for community into becoming a high school teacher, but he also wanted to give someone else the opportunity to breathe new life into the shop.

Liam tells CityMag he and Costa, who are both musicians, are “revamping everything,” but will capitalise on the status Clinic116 has garnered within the community.

The first big change was establishing a recording studio at the rear of the shop.

Costa and Liam (right) will continue decking-out the studio with production gear, but are already pretty happy with the Gold Mike pre-amp. The Himalayan salt lamp maximises vibes

The team run local independent hip-hop imprint Deli Records, which was previously distributed by Justin in Clinic116. Liam and Costa say the closest recording studio for them is Northern Sound Systems, which can be out of the way for some, so they wanted to establish something more central.

“Clinic116 being such a significant part of Adelaide hip-hop culture, we wanted to try and keep that alive and expand on it with the studio, and try to support the scene of your local music scene as well,” Liam says.

“We want it to become a place for more musicians to springboard their careers, and I want to try and make it more of a community hub, not just for hip hop, but for any artist looking to record their music or to be pushed in a direction, or offer advice for that.”

Justin recognised their ambition for Clinic116 from their first interview, and knows the legacy can be trusted in their arms.

“I think the business can have longevity for another 20 years,” he says.