Life on the road with Jimmybay

Ahead of the 2021 South Australian Music Awards, CityMag spoke with People’s Choice Country Artist of the Year finalist Jimmybay about his winding path from mining worker to travelling musician.

Jimmy’s pathway into the industry wasn’t linear. The self-taught musician once worked in the mines in SA’s North before travelling Australia for six years. Now, he uses music to tell stories about his life on the road.

You can see Jimmybay as part of the Folkloria lineup, happening on Sunday, 31 October.
Tickets are available here.

When CityMag meets with Jimmy, he’s sitting at The Big Table in the Central Markets.

The musician looks as though he’s walked straight out of a Western film – a tall man in a plaid shirt with a bandana tied around his neck and a Blakesby hat perched on his head. Sink and swim is inked across his knuckles, with a smattering of maritime designs tatted across his forearm – a reminder of his Queensland childhood.

Each of the musician’s fingers is tattooed with a different symbol, each speaking to Jimmy’s life as a vagabond.

“These are all symbols that travellers in the States and Europe would scribe into trees and scratch into concrete to let other people know what’s around the area,” Jimmy explains.

“[I got them] just to remind myself about things when I was travelling I suppose, just to be safe and all that.”

For eight years, Jimmy worked as an on-again, off-again underground truck driver in Roxby Downs. A solitary line of work, he describes navigating dark tunnels during nightshift for hours at a time, with nothing but his thoughts to keep him company. 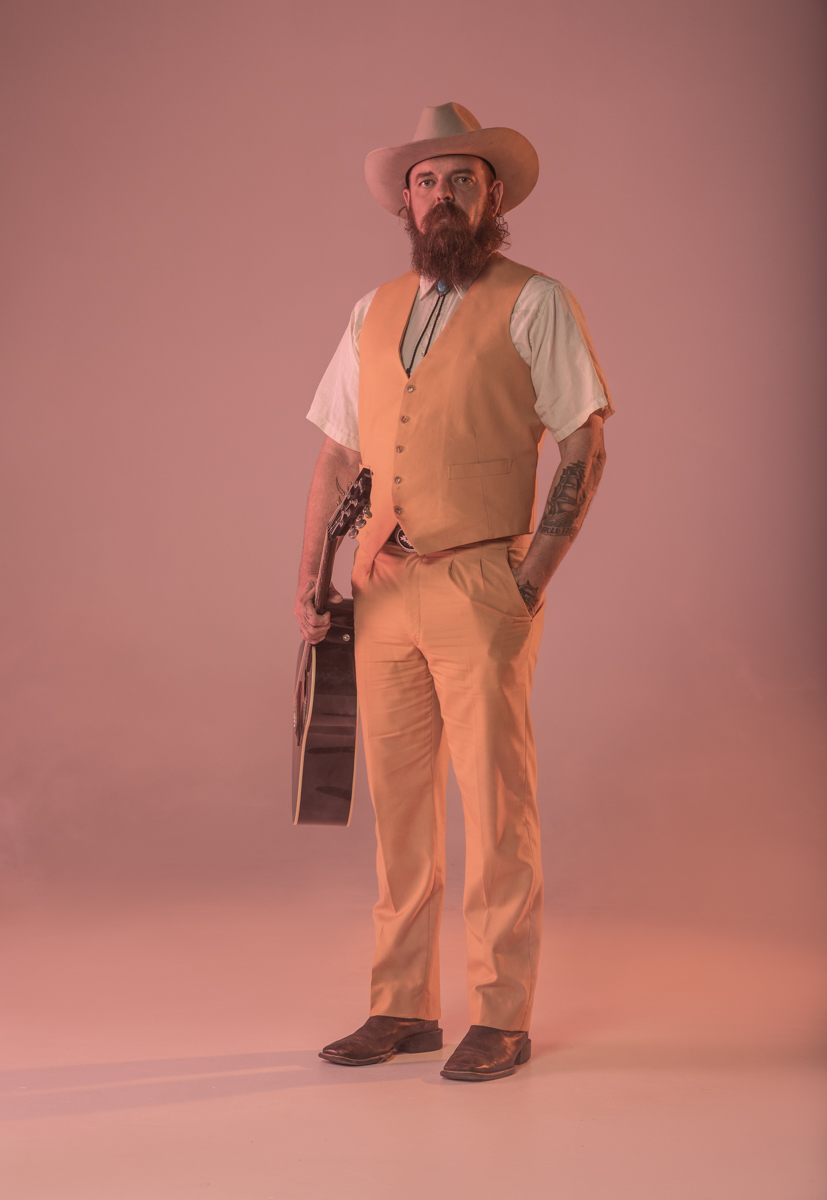 Nightshift workers were advised not to occupy the site’s radio space, but Jimmy wanted to snap people out of their monotonous overthinking. He began to sing Peter Andre tunes through the transmitter.

“Nobody knew who was doing it at first, because it didn’t show up which radio was being used. I thought it was sneaky,” Jimmy says.

“It got to the point where I got my name tag changed to ‘Peter Andre’ on my overalls.

“Everybody remembers [Mysterious Girl], and everybody has a laugh when it comes on because everyone has got that childhood memory of Peter Andre…and how corny [that song] was.”

What started as a gag to get his mates laughing during nightshift saw Jimmy begin to improvise lyrics over the radio in between rusty harmonica solos.

An accident on-site eventually made Jimmy reconsider his job.

With one song under his belt and six months of teaching himself the guitar, Jimmy packed up his belongings, including a harmonica and tambourine, in an old vintage suitcase that he’d been using as percussion and headed North to Darwin. He says he felt like he had nothing to lose.

“I just went and camped around town, down at Mindil Beach and out in the long grass…and walked into town and started busking on the street.”

“That’s when I decided I wasn’t going back to the mines. I could sit on the street and have fun, play music and have a good time… I’m not going to go drive circles underground again.”

Jimmy traversed Australia for six years in a Kombi van before returning to Adelaide, street performing his way through small towns and making songs as he went, picking up odd farming jobs along the way.

“I had a lot of spare time because I didn’t really know too many people,” he says. “I might breakdown for a week by a creek, and I’ll just sit there and just play the guitar and start singing about things that have been happening.

“I had a friend years ago tell me that the way she dealt with awkward situations was to pretend she was in a book… looking down of herself and reading the situation. That way, it makes it easier for you to laugh about it.

“So that was my way of doing that. Sitting by a creek and singing about it was my way of writing a chapter in a song and then being able to laugh about that situation.”

Jimmy first fell in love with music while rifling through his parents’ vinyl collection as a kid. Black Sabbath, Jimi Hendrix and Simon & Garfunkel would croon through the record player in his childhood home. Later in life, he found love in Paddy McHugh and William Crighton, both of which he credits as musical influences.

Though his music taste evolved to alt-country and folk, elements of the psychedelic storytelling of Jimi Hendrix run through Jimmy’s music. He describes his wayward style as an amalgamation of his varied musical background.

“I’ve never really had an actual creative process other than sitting down and just letting things come out. I just play the guitar for long periods and just free flow stuff,” he says.

“It’s probably not the most efficient process, but it works for me. So I’ll be singing the same verse over and over again for three months, and then another verse will come.”

“I think it’s swinging more towards a country, folk-blues thing now, which I’m really enjoying going into. I feel like I’m settling into a place that I’m enjoying, instead of randomly shooting all over the place trying to find something to grab hold of.”

CityMag caught Jimmy performing one night at Nola in the East End, a set which included his newly-released song Till I’m Feelin Well.

With his offbeat charm and honest lyrics, the multi-instrumentalist had the room spellbound within the first few lines.

“I’m really stoked to be playing. There are so many good people in the field,” says Jimmy.

“When I first got to Adelaide, I was playing five open mic nights a week, and I was busking every day down the mall… but always looking up to these guys like Tom West and Nancy Bates and all those legends.

“Now, I get to play on bills with them – which is awesome.”