In 'Grief Lightning', showing now at Rumpus Theatre, playwright Mary Angley is more than a little obsessed with a Reddit 'Grease' fan theory that posits the 1978 film takes place entirely within Sandy's mind.

In Grief Lightning: A Satire in 78 Slides, Mary Angley, the show’s creator, plays an excommunicated academic obsessed with a Grease fan theory.

In speaking with Mary, it’s clear the character contains more than a modicum of the playwright’s own passion for the 1978 hit musical film.

It was a film Mary grew up with, and which, like all of us, they would be passively exposed to throughout their life.

“I used to see it on network television pretty often, and I feel like I would watch it and I loved it,” Mary remembers.

“I loved all the musical theatre stuff and I loved the costumes and had a great time, but was kind of uneasy about certain sections of it.”

The film has been active in cultural conversation long enough to have touched several generations, and Mary remembers learning, through their mother, of the differing ways the film was interpreted at the time of its release.

“I have a distinct memory of talking to my mum about it, and my mum telling me that when she watched it as a kid, my grandmother didn’t approve,” Mary says.

“She was like, ‘It’s a naughty movie, and Sandy shouldn’t have changed who she was at the end. That was messed up’. And I was like, ‘Ha ha ha, my silly conservative grandmother’.

“But then encountering it as an adult, I was like, ‘Actually, my grandmother might have had a point’.” 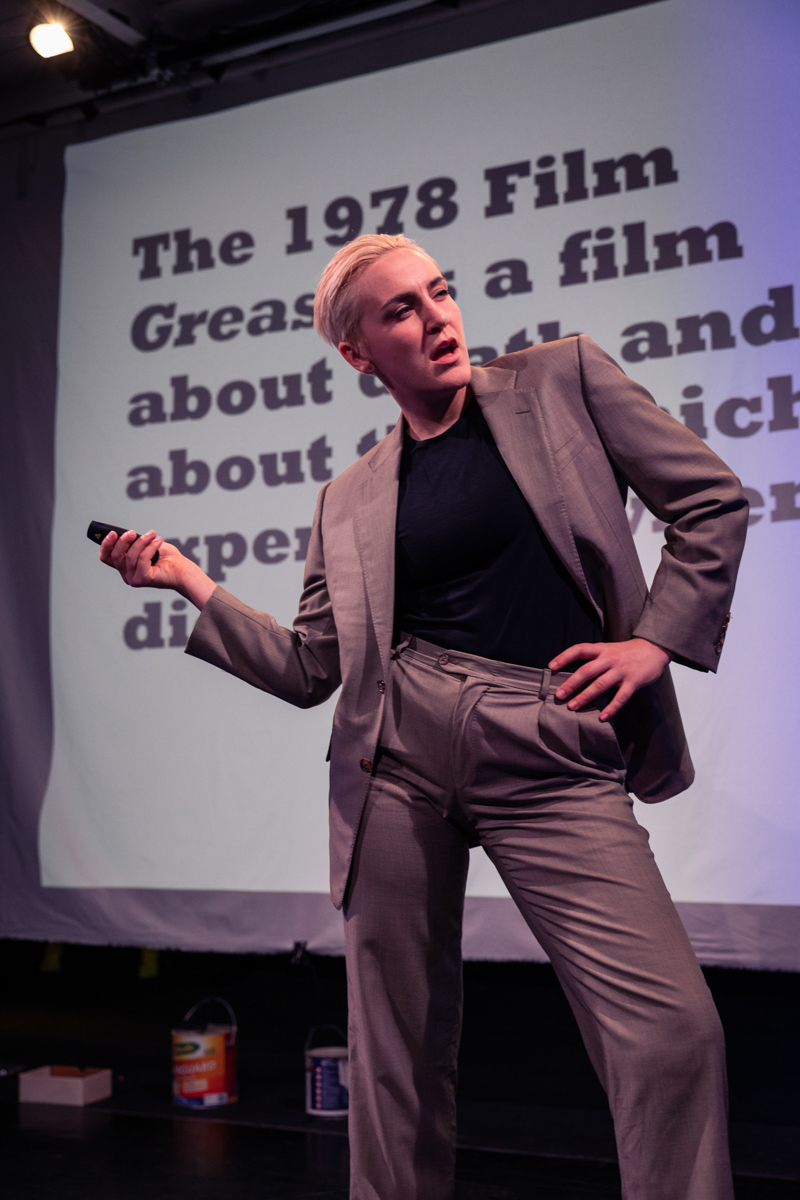 Mary as the rockstar academic, exiled from academia. This image: Jamie Hornsby

Mary’s perspective on the film shifted incrementally as they matured, particularly when they saw their brother portray the teen angel character, from the song ‘Beauty School Dropout’, in a high school production.

“It would have been maybe 2014… Watching my brother turn to one of his fellow students and say, ‘No customer would go to you unless she was a hooker’. It was like, ‘Ok, that’s spicy there’,” they say.

Mary was not the only person bringing a new eye to the film. A year earlier, in 2013, Redditor atomicbolt posted an image on the FanTheories subreddit which posited Sandy actually drowns in the opening scene of the film. The source of the theory is Danny’s line “I saved her life / She nearly drowned” from ‘Summer Nights’. The entirety of Grease, the theory goes, is Sandy’s coma dream.

Atomicbolt’s post sat on Reddit for a few years before bubbling up into mainstream media, at around 2016. This is when Mary encountered the theory. They were immediately “just overjoyed with it and fascinated by it”. 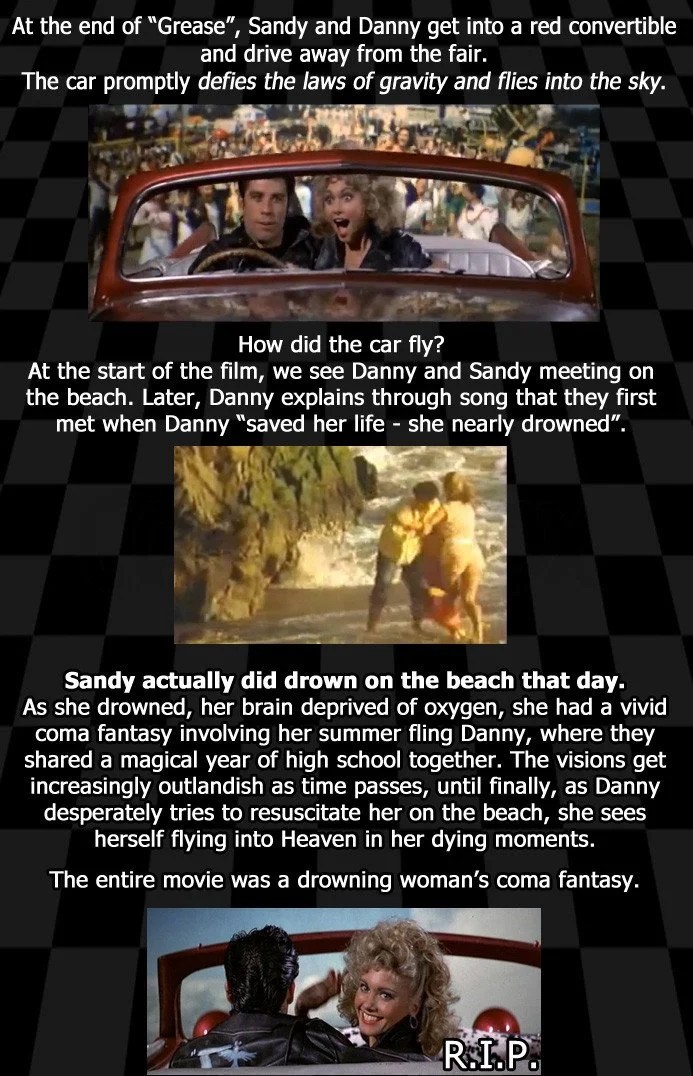 If it’s not a coma fantasy, explain the flying car

Mary’s enthusiasm for the theory fit with an idea they’d been playing around with for “a show with PowerPoint… [playing] a lecturer who has been kicked out of academia, is being laughed at, giving this bootleg lecture”.

“They’ve hired their own space, because they’ve been thrown out of the universities, and they want to tell people about this weird conspiracy theory,” Mary says.

The character Mary created is a blending of the personas and presentation styles of Jordan Peterson (who has his own fan theories about red meat), YouTuber Brian David Gilbert, and musician Alex Cameron. All of this, infused with a heavy dose of the internet.

“It’s been a really fun time experimenting with form, to be, like, how can you put Reddit on stage?” Mary says.

“Which is also why PowerPoint is such a great medium, because you can put the internet on stage. There are screenshots of people on Reddit that I can project and then interact with and point at and zoom in on.”

For all the satire and semiotic deconstruction Grief Lightning levies at Grease, Mary remains a fan of the film.

“The performances are really good, John Travolta is very cool as Danny, Olivia Newton-John is very endearing as Sandy, but also the songs are just absolute bops,” they say.

The show is not one that “advocates cancelling all problematic media,” Mary says, but “one that advocates for awareness and reimagining”.

“My intention as never to ruin the film for people, but I have really enjoyed being able to add this extra layer to it,” they say.

“And hopefully that’s something people take into other films they’re watching, from the ‘70s or the ‘80s or even now.” 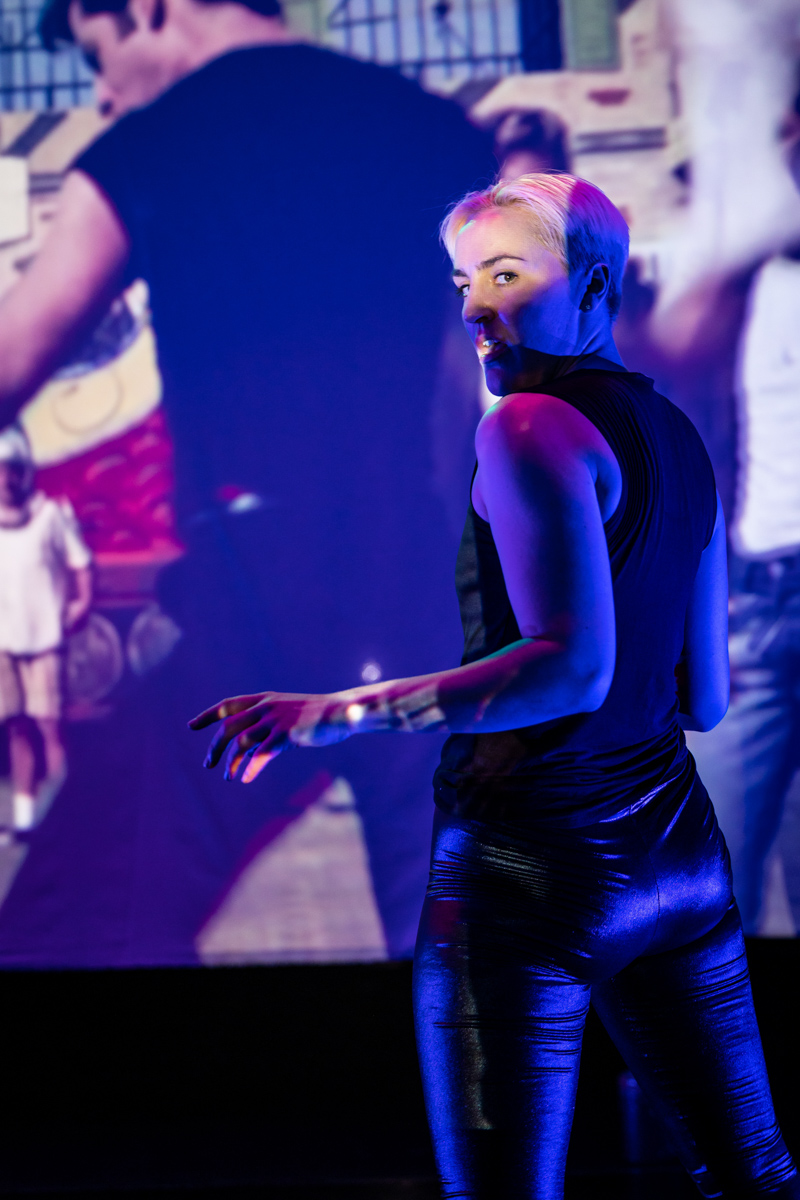 The show has had two successful Adelaide Fringe seasons, and appearances at Midsumma in Melbourne and the Edinburgh Fringe. For this latest run, Mary is working with sound designer Dan Thorpe and lighting designer Mark Oakley, who have levelled up the production.

“In Fringe, it was basically just me standing in front of a projector, being lit by the light of the PowerPoint slides,” Mary says.

“But now we’re at Rumpus, we’ve got this huge, massive space in this abandoned warehouse-slash-theatre building, so we’re able to do a lot more cool tricks.”

Later, Mary hopes to take this more developed version of the show on the road. And they’ve also been considering audience requests for future topics.

“I’ve had a few people be like, ‘You should do Titanic’,” Mary laughs.

That film has garnered a fan theory that the Jack character was originally written as a trans man, which would give plenty for Mary, and the exiled lecturer, to dig into.

“I find fan theories-slash-conspiracy theories so interesting, because on the one hand, they’re completely pointless, and you can debunk them easily by being like, ‘That’s not what the director intended’, but once you commit to suspending your disbelief, there’s this wonderful world that opens up and becomes this little jigsaw that you’re playing with,” Mary says.

“You keep pushing yourself to imagine more and more ways that your theory could be possible, and it takes you to really strange and interesting places.”

Grief Lightning: A Satire in 78 Slides is on at Rumpus Theatre in Bowden from 19—30 April. For tickets and more information, see the event page.