Hobbies are worth not getting paid for

Podcaster and writer Seren Bell sits down with three creative people who have no problem not making money from doing what they love.

“Can you make money doing that?”

It’s the question that smothers enthusiasm. And while the hobbyist may like to respond with a volley of statistics on subscriptions or sales or future liquidity opportunities, others are okay with not being paid for what they do in their spare time.

Increasingly, it feels like our private lives are structured around profit and quantifiable self-improvement. Friends, colleagues and relatives might not ask the exact same question as the one at the top of this article but the implication is there – that we are wasting our time.

More and more of us find our sense of identity bound up in a career; a sprawling, borderless career that cannibalises our time and every pursuit of passion until we view ourselves essentially as workers, measuring our value by productive output.

As an antidote, CityMag found three individuals who pursue a hobby purely for pleasure and enjoy the clear line that puts between their jobs and who they are as people. 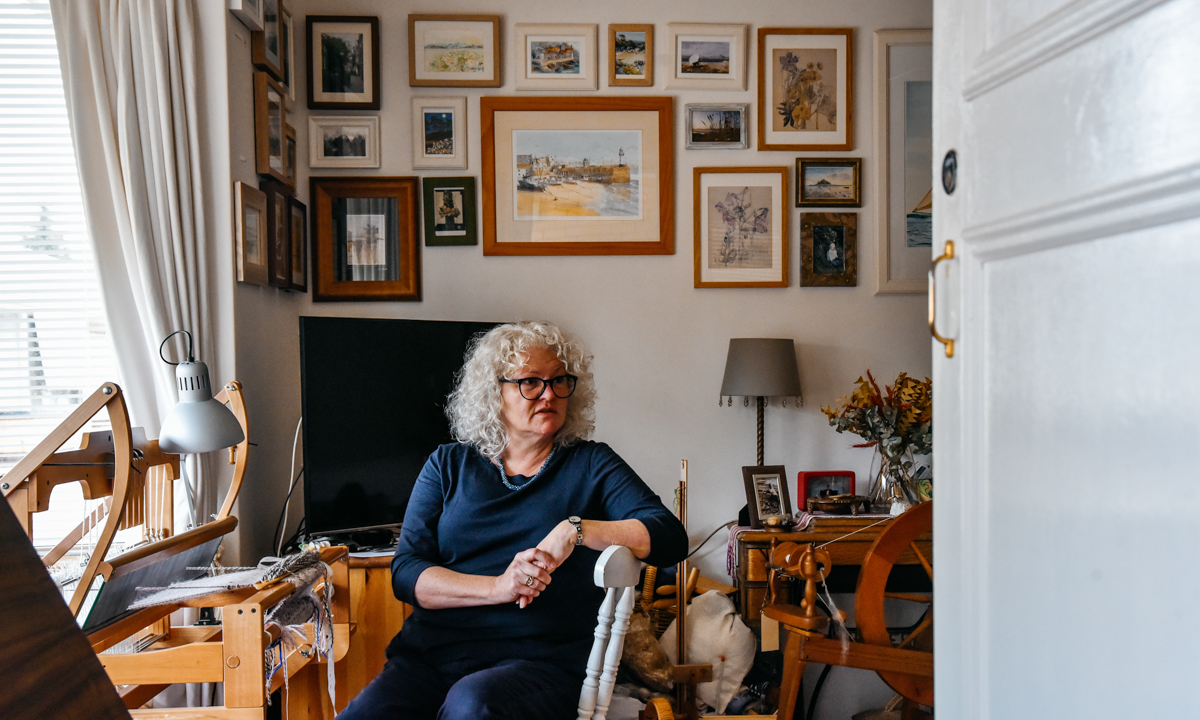 What attracted you to your hobby?
I’ve got a background in textiles; I studied at textile college in Scotland. I did the clothing design course, but there were weavers and spinners all around and I really wanted to do it. I just find spinning so relaxing.

How did you learn to spin?
The original wheel I had I took to the Spinners and Weavers Guild to see if they could fix it and in the meanwhile I rented one and just sat every night and practised and practised.

When did you start weaving?
I had a fall in August of 2017 so I was off work for three months and I had nothing else to do. I don’t particularly like knitting so I thought ‘What am I going to do with all this wool?’ so I thought I’d try weaving. I just bought a tiny little loom to start with.

Was that self-taught mostly as well?
Yes, and YouTube. I did get two lessons from one of the weavers at the guild as well. I’m always learning, and I’m not doing any fancy techniques or anything, and there’s some marvellous weavers out there who do all of the patterns and things, but I’m more into textures because I spin the yarns myself.

So you want to put them on show?
Yeah.

What do you feel like weaving and spinning brings to your life?
Just relaxation, switching off and being creative.

What’s the one thing you’ve made or learned that you’re most proud of?
Well, after only weaving for a couple of months I entered the Royal Adelaide Show and got a 1st and two 2nd [prizes]!

Amazing! What do you find interesting about weaving and spinning culturally, or as a community?
It’s a lovely community. I’m actually just back from Tasmania. I went for a long weekend to a Spin Fest and just met all people that are crazy about wool as well!

I mean this wool is just from the hills, off the sheep. I wash it, spin it, and wear it. I love the traceability of it all and, if you can dye it, you can just use natural things. It’s the simpleness of it all.

Originally I was a pattern-cutter, when I studied design, and that was everything to the millimetre, it had to be precise whereas this is not that way, it’s about letting go. It’s quite difficult but it’s relaxing. 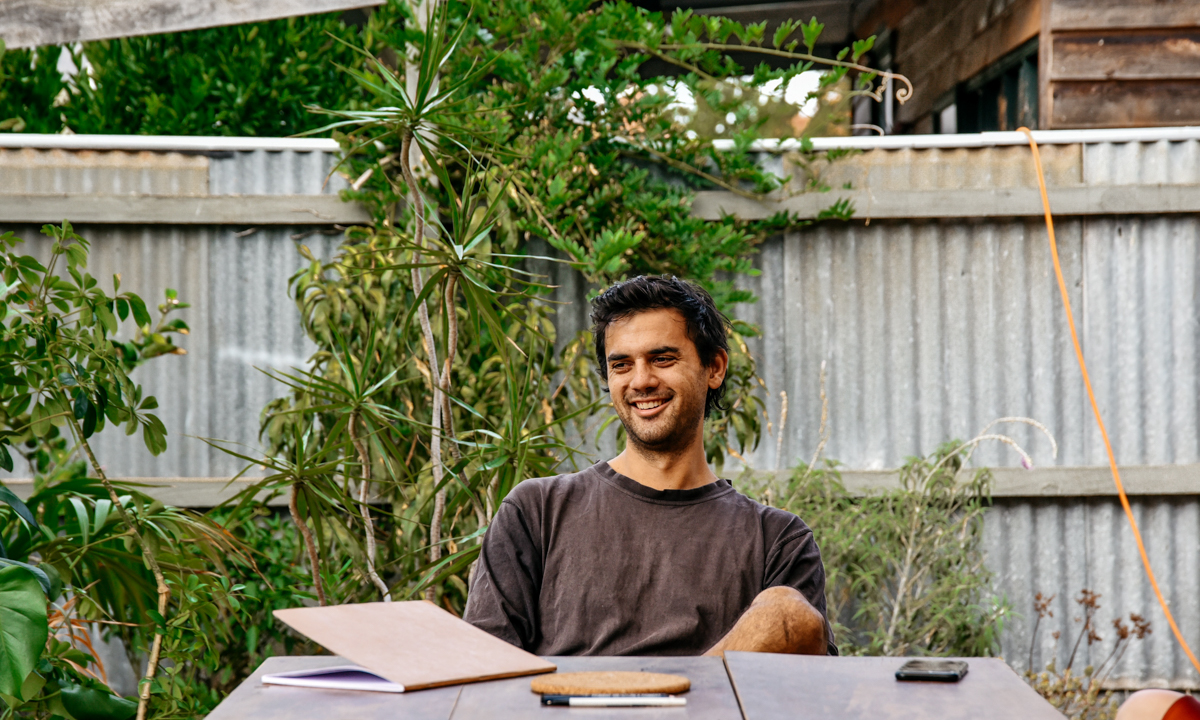 How long have you been doing your hobby?
For ten years I’ve made small things and filled books with images and writing. At various times I’ve done more writing or more drawing depending on how I was feeling creatively at any one time.

It’s an impulse rather than something you really specifically carve out time for?
Oh yeah, for sure. For instance – you just have an idea during the day and then you go home and you’ll find the time and you’ll knock something out just before you go to bed. And once you’ve done that ten times you just kind of keep doing it.

It’s a habit.
Yeah, it’s a habit, and it doesn’t feel weird after you’ve done it a few times.

You’re not self-conscious?
It becomes a more formal process after a while because you do it so often. A phrase might attract you during the day, or a thought, or funny relationships between things that you might chance upon in conversation. Then you go home and burrow into it creatively.

What do you feel like it brings to your life?
I think it changes. When I was younger, I used to do it just because I had so much spare time. It was literally just something to do. As I’ve gotten older there are a lot of things that are difficult to find the right response to in life.

It might be political or it might be emotional and there might not be a ‘right response’, but you can set up all your different arguments in a creative piece and have them just, kind of, sit there together. It brings me satisfaction, and it brings clarity.

That makes sense. What’s your favourite thing that you’ve made?
I wrote a really good poem last year, that was great, but I couldn’t write it again. It was better than my other stuff, and it was like ‘Oh damn,’ because you get to the end of it and the creativity leaves you and it’s just sitting there and it’s its own thing sitting there – and you don’t have any connection to it anymore.

I’ve got this huge back catalogue, so there’s stuff that I’m heaps proud of that I did when I was 17, but I wouldn’t write it that way again and I wouldn’t have those same thoughts again but they were so clear and brilliant at that time in my life that I like reading through it because I’ve got distance from it.

How do you share your art?
I think something that I wrestled with maybe five years ago when I was at law school and I was thinking about going to art school, was that I really like being creative and maybe I should try and make money out of it or pursue it in a formal way.

I had a few exhibitions in my very young twenties and they were all fine because everyone was also 20 so you could get 200 people into a gallery whether anything was any good at all. But it didn’t work because I make little things; poems or little illustrations that I like to spend about thirty minutes on.

Now I can throw it online and that’s actually a wicked platform to dissociate yourself from the idea of having to make it more. It can be more yours when you don’t have to sell it, basically. You don’t feel compelled to be hyper-artistic, to be really contemporary-art about things. You can express things the way you want to express them and you can draw things the way you want to draw them. I think that’s all I want to add is that. It’s quite freeing to do it and to expect nothing in return for it. 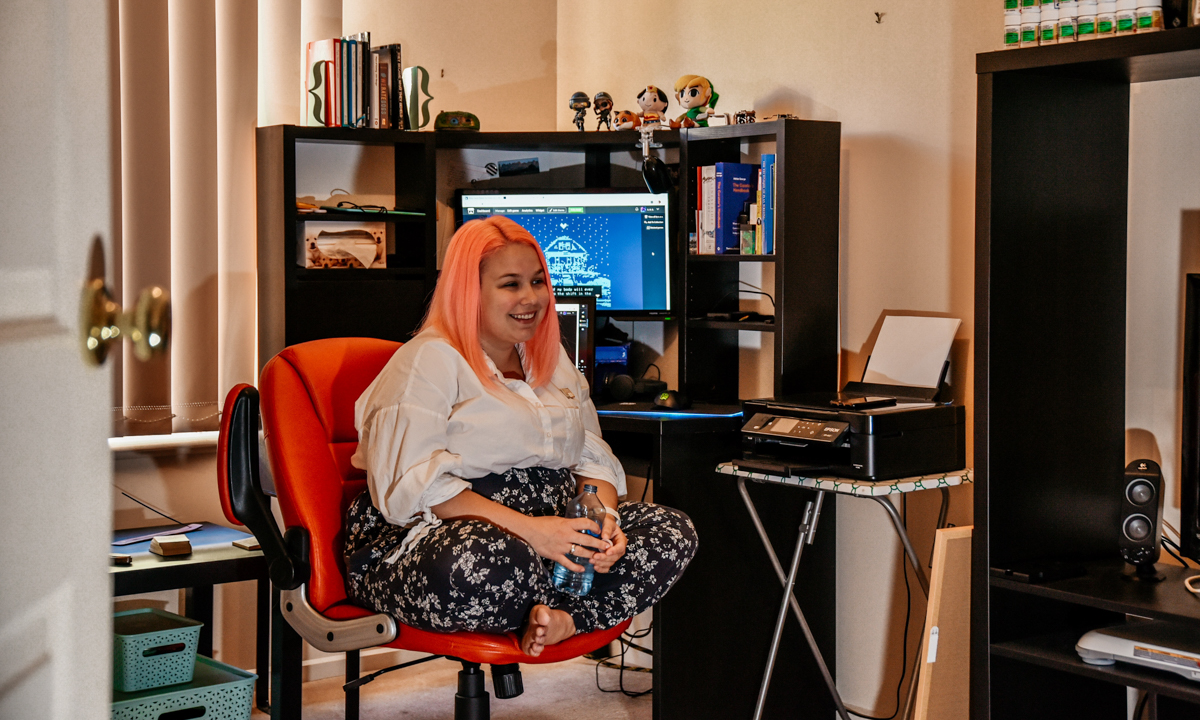 What’s a walking simulator?
You just walk around and talk to people and look at stuff and that’s the whole game.

It sounds nice. What do you feel like it brings to your life?
I think it gives me an outlet for creativity that also uses some of my technical skills where, normally, they’re quite compartmentalised. I do love software but I’m also very creative and I want to get that out. It’s a nice marriage of those two things without being so difficult that I give up on it.

I have ADHD so I have a lot of hobbies and I get bored. Bitsy kind of wants you to make a little game and then give up on it and do a different thing. It feels a bit self-indulgent, but it’s giving me permission to be.

Absolutely, it’s for pleasure, that’s what hobbies are for. What’s the thing that you’ve made that you’re most proud of?
The most popular one is called ‘Omega ceti Astralis’ which roughly means ‘The Last Space Whale’ in Latin. It’s just a whale in space – that’s the whole game – you just fly around.

It’s the actual night sky, I took a photo of it and converted it to pixels and simplified it, there’s the band of the Milky Way and there’s music. People seem to like that, it’s quite meditative. That’s a game which has no words, just all movement and experience.

I also have the opposite, which is called ‘Home is a Snow Globe’. I found a Google Street View of my childhood home in New Jersey and I converted it to pixel art. The whole game is just text and that image. It’s basically a poem with a game package. So those are the two ends of the spectrum.

They’re beautiful. So what’s next?
I’m one of the judges for Freeplay, which is an independent games festival in Melbourne and I feel like I’d be remiss if I didn’t plug that!