Simon was a master of both trends and turntables.

“We as a culture had broken out of the underground.”

The ARIA-nominated Groove Terminator arranged club anthems – like funk-filled ‘You Can’t See’ featuring rap royalty Kool Keith, or house-steeped ‘Here Comes Another One’ – and made the international dance music community double-take on Adelaide.

Before GT occupied Billboard 100 and Ministry of Sound compilations, Simon cut his teeth as a fledgling teen in the ’80s, flogging punk and electro tracks from a community radio station in South Australia. 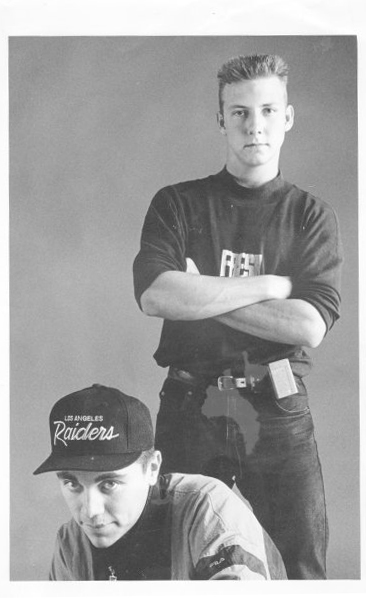 In the next decade he pivoted towards hip hop by emceeing and scratching records as one half of rap duo Major Rhyme Squad. CityMag managed to dig up this artefact of them playing live at the Old Lion Hotel.

Simon eventually settled into electronic dance music and his GT moniker, with two albums Road Kill and Electrifying Mojo, at the turn of the century.

But he truly solidified his reputation as a nation dance music maestro when he featured on up to eight Big Day Out bills, alongside Australian-grown producers like hardcore-heavy BeXta and house-infused Paul Mac, and seminal global electronic outfits like The Prodigy and Underworld.

“We had bona fide superstars all across the globe with acts like Groove Armada, Daft Punk, my mate Darren Emerson’s band, Underworld, of course,” Simon says of the genre as it slowly made its way out of the shadows.

“There was [also] the Prodigy, who I’ve always loved (RIPKEITH), but naturally my personal favourite was Fat Boy Slim with whom I had some MEGA nights out with during our Big Day Out tour.”

Although Simon relocated to Sydney to pursue his career and multiple record deals, he believes there was something in the South Australian water pushing electronic deejays and producers to create burners.

“We were holding our own with local artists like DJ HMC,” says Simon.

“Juice (Records) / Dirty House Crew were flying the flag strong for techno on the local and world stage.

“It’s even rumoured that DJ HMC’s ‘Phreakin’’ was an influence on Daft Punk, which is pretty cool!”

Prior to making it big, Simon earned his mixing stripes playing to crowds in the 5000, specifically in since-closed West Terrace discotheque.

“We had Heaven, which was just the best big room to play as a deejay,” he says of the venue that eventually became HQ.

“Everything I know about how to play to huge crowds I learnt here, as every deejay who has played here will also tell you. There was nothing like it anywhere else for years in Australia.”

What were you doing in 1992? Groove Terminator was playing heaters at a place touted as “the spot“ for Detroit techno and electro in Adelaide, Cargo Club. Watch the video to the left.

But, like the mythological beast, Hydra, when these old venues closed, new venues opened in their place. For Simon, a contemporary mix of underground venues and mega-clubs symbolises the health and diversity of the scene.

“These days the crew at places like Electric Circus, Fat Controller and Lotus (Lounge) have done a great job flying the flag for the last decade or so for quality underground [music] and the cooler side of things,” Simon says.

“The rise of multiple larger venues like HQ, Dog and Duck and the newly reopened Downtown shows that there is still a place for that big room experience in a large way.”

To top off more than three decades of GT, Simon will headline the newest iteration in winery day parties, Block Rocking Beats, next month in McLaren Vale.

Block Rocking Beats is a dance music throwback featuring some of big beat’s largest bygone luminaries (the title nods to a Chemical Brothers track), such as Dimitri in Paris and Krafty Kuts.

But if you want to keep a firm eye on the horizon, like Simon, pay attention to his pick of SA-made musicians that are just as eclectic as he is.

“I’m sure all your readers know and love the Adelaide man that is MOTEZ,” says Simon, adding “I really feel like he has carried the baton from my era into the future and is inspiring a whole new generation that we have yet to see breakout.”

He also pegs Allday’s collaboration with Lonelyspeck ‘See You When I See You’ as a “big track”, while George Alice’s single ‘Circles’ also puts her on a path to greatness.

Simon says he’s “super excited to see what the future holds” for Adelaide’s electronic music scene, but this CityMag reporter is keen to see how the musician will reinvent himself next.

Groove Terminator giving the people what they want – nostalgic bangers