Winter is upon us, and along with it has come the undeniably scariest weather/temporal combo thrown up by nature: the dark and stormy night. And on such an occasion, what better pastime exists than huddling around the campfire to tell ghost stories about our spooky city? 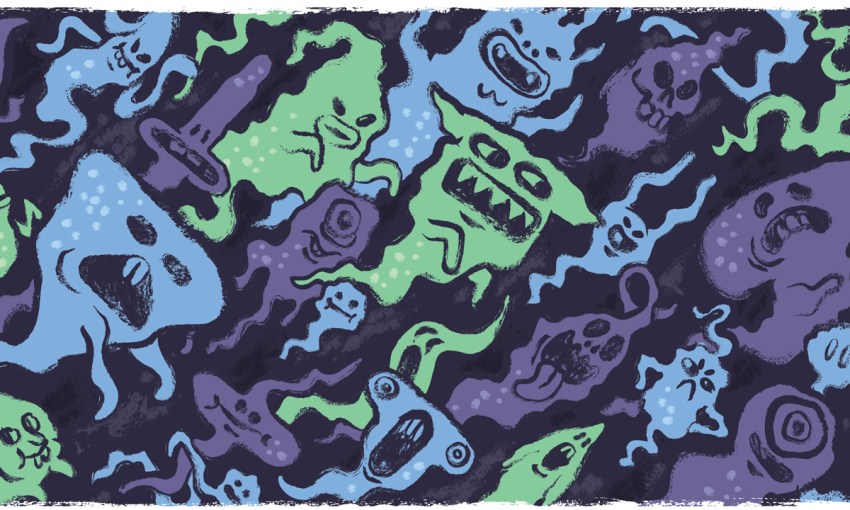 Until 1918 the old bluestone building on Kintore Ave was known as “Adelaide’s Destitute Asylum”. This is a much spookier name than what that institution would have been called today – likely something like “Temporary Accommodation for the Homeless” – but I guess they were quite skilled at infusing a chill-factor into government organisational names at the turn of the century. Even less-spooky is the current name of the Destitute Asylum: the “Adelaide Migration Museum”. With a sign like that out the front, no wonder the place is teeming with restless ghosts trying to push people down staircases: they’re just trying to compensate for living in the boringest-named building in the state. How about we compromise and rename it “Adelaide Museum of the Damned”?

Adelaide Arcade wins the prize for spookiest arcade in the city – completely putting to shame Renaissance Arcade, aka the paranormal Nullarbor of the city. In 1885 the Arcade was the first shopping strip in the state to receive the miracle gift of electricity. Soon after the building’s opening, arcade caretaker Francis Cluney – likely still baffled by the enigmatic new technology – wandered too close to the electrical generator, plummeted in, and was mangled into roughly the shape of a French horn. His ghost, they say, stalks the echoing halls of Adelaide Arcade to this day, presumably locked into an eternal war against his greatest foe: nature’s electron. Alleged footage of this spectre appears in one of the least convincing, lowest resolution security camera footage videos this author has ever borne witness to.

Like all good cities, Adelaide has a haunted house on a hill. Ours is the Carclew Youth Arts Centre. Though the name may not inspire many chills, the resident ghoul sure does: a pale-faced woman in a ragged grey dress who has been spotted stalking the grounds by night. She is the ghost of Lady Bonython, who – so the story goes – caught her husband consorting with his mistress and so was murdered for her troubles. According to legend, the Lord Bonython was among history’s most bungling assassins: after picking up his wife and hurling her through a second floor window he hurried downstairs to survey the damage, realised that she was actually still alive, and so picked her up again, clambered back up the stairs, and re-hurled her out the window. This time the murder stuck. After extensive trawling of Sir Bonython’s Wikipedia page however I was unable to locate a section headed “Murder of Wife by Multiple Throwings Out a Window at Carclew”, and so must conclude that the preceding anecdote is at least partially fabricated.

This one is no big surprise: the Old Adelaide Gaol (known to locals of years past as ‘the Current Adelaide Gaol’) is apparently rife with ghosts. Among the discontent souls are Elizabeth Woolcock, the only woman ever to be hanged in South Australia; W.B. Ashton, the overweight, lunk-footed first Governor of the institution who died in his office; and various other expired scoundrels who choose to manifest as vaguely spooky lights and ambiguous noises. But although we’re all for a heavily populated ghoul metropolis on the fringe of the CBD, it does seem pretty unfair that after serving a full sentence in jail* these people should then be required to serve an additional, eternal sentence as a ghost in that very same jail. Haven’t they been punished enough for stealing a thruppence of corn bread in 1865?

* Let’s face it, the other spelling of that word never caught on.

This town is so haunted that in 2001 Channel 9 had to conscript Warwick Moss (host of The Extraordinary) to write, produce, and direct a feature-length documentary about it. The program was entitled “The Most Haunted Town in Australia: Kapunda”, and you can watch all six parts on YouTube. I did. The whole thing ends with Warwick weeping openly in a graveyard – I couldn’t tell you why, I just happened to skip directly to that moment. But perhaps most chillingly of all is that after the credits roll viewers are subjected to a snippet of the next program: a live, commercial-free debate between John Howard and Kim Beazley (“Your moderator tonight… is Ray Martin.”). Some horrors, I think we can all agree, are better off staying in the past where they belong.