A satirical Fringe show by The Chaser’s Charles Firth and The Shovel’s James Schloeffel will take you on a trip through wild COVID conspiracy theories and show you how to make your own Pete Evans BioCharger. 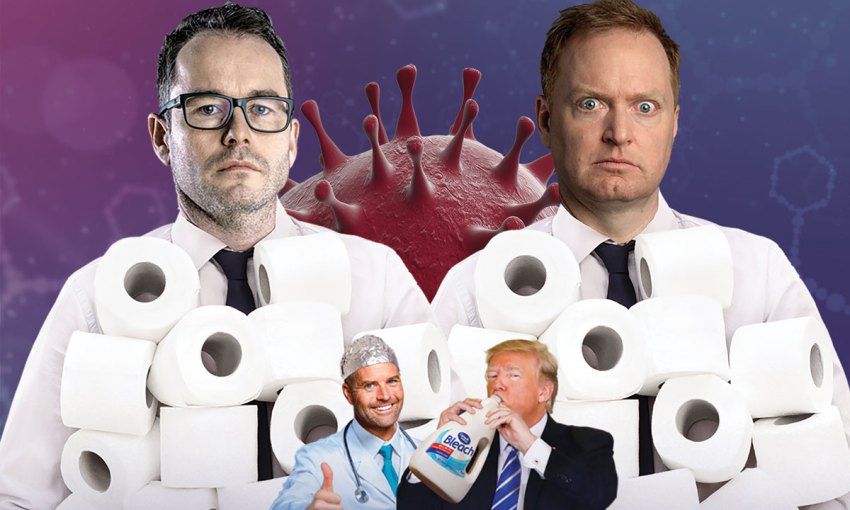 James Schloeffel is the founder of satirical website The Shovel and also created the satirical supporter group Aussies for Trump during the 2016 US election, while Charles Firth is a co-founder of The Chaser who has been seen on ABC programs such as The Chaser’s War on Everything and CNNNN. The pair have been working together for five years,  most recently presenting and touring The Anti-Experts Guide to Everything.

That show was forced off the road in 2020 due to COVID-19, but the upside, they say, is that “it’s been a pretty good 12 months for conspiracy theories and fake news” – which, in turn, means there’s a stack of new material for a couple of funny guys who manage to find the sublime in the ridiculous.

As they prepare to return to the Adelaide Fringe with The Anti-Experts Guide to the Pandemic, James gives CityMag a taste of their biting satire and tells us how to go about joining the League of Anti-Experts.

The Anti-Experts Guide to the Pandemic is in Gluttony from 19 February until 7 March as part of Adelaide Fringe. Tickets here.

Elitist “experts” will tell you that’s 14 words, but it’s actually only 10.

There seems to be a pandemic of anti-experts these days – why is that?
At some point people decided it was better to trust Barbara from Facebook, whose sister’s best friend knows someone whose daughter works part-time at a naturopath where they’ve discovered that you can ward of COVID-19 by holding your breath for two minutes, than to trust a scientist with 20 years’ experience. Probably because scientists are boring.

What are some of the wildest conspiracy theories of 2020 you look at in The Anti-Experts Guide to the Pandemic?
There’s been this rumour going around the Scott Morrison has had a team of something like 40 media professionals micro-managing his image during the pandemic. But it’s not true at all. He has at least 100.

There’s also this other crazy story about this woman who got pregnant without having sex and then gave birth to a man who could walk on water. Oh shit… sorry, wrong show.

I was shocked to learn my $14,990 BioCharger won’t cure COVID. What is it good for?
It’s a bit like a Fisher-Price toy. It’s got flashing lights and it’s great for keeping kids entertained, but it doesn’t really do anything. At $15k it’s a bit more expensive than a Fisher-Price toy, though. So in the show we have an instructional session on how to make your own BioCharger, using ingredients you can only find in nature or Kmart.

If people want to join the League of Anti-Experts, how do they go about it? Is there a secret handshake?
It’s easy. Just post a two-hour dash-cam YouTube video about how Bill Gates is trying to take over the world by vaccinating 5G phone towers. Then we’ll send you the secret code.

Let us in on one shocking fact the doctors, scientists and other so-called experts don’t want us to know about the pandemic…
The so called “scientists” will deny this, but you can actually cure COVID-19 by buying a ticket to our show. It really is that simple.