Love, loss, and LIFE – the show

Strut & Fret, the team behind LIMBO and BLANC de BLANC are bringing a brand new circus spectacular to the Adelaide Fringe at the Garden of Unearthly Delights.

Life – The Show combines theatre, music, dance, and cabaret into a 90-minute blockbuster that promises to feel more like a film than a stage show.

Tickets are $55 buy them here.

It’s the sort of lineup that makes the Marvel Universe feel a little less super and our world a little more spectacular.

Founding director of Strut & Fret and creative director of LIFE – The Show, Scott Maidment explains how this unique mixture of genres creates a show unlike anything else at the Fringe.

“I wanted to do something a little bit different from the rest of the shows we’ve done in the past, something everybody could enjoy and relate to,” he says.

“It’s a show in two parts. The first part is kind of a narrative and observational look at what someone’s life can be like. The second part of the show is a celebration. It shows us that life’s a big party so let’s enjoy it while we’ve got it.”

If the cast of Life are superheroes then Scott is Professor X; pulling this super team together into a show is only possible after years of investment, learning and perseverance in the industry.

“Having been in the performing arts and entertainment industry all my life, I’ve been able to build up some pretty good contacts,” says Scott. 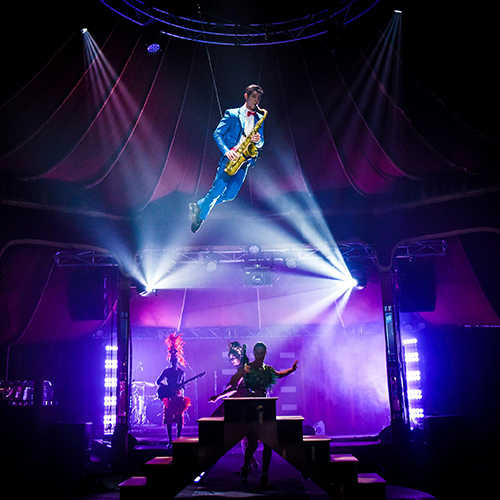 “I always want to get a mixture of people to create something new. The diversity of talents and perspectives is what gives this show such a fresh take. It’s not necessarily just my vision, it’s all the performers ingredients in there as well.”

Perhaps where Life – The Show deviates from the Marvel franchises is in its classification at the digital box office. Life is Adults Only – R18+ with warnings of ‘occasional,’ strong’ nudity, coarse language, and sex listed.

If these warnings weren’t enough of a reason for you to get you over to FringeTIX to book a seat, may we remind you: this show also features a flying saxophonist from the Violent Femmes.