For the first time, the local artist brings us work that explores her most intimate relationships.

Artist Emmaline Zanelli has been productive since graduating AC Arts in 2015. She has exhibited in more than ten separate shows, including being selected for last year’s National Graduate Exhibition in Perth.

But in that time she has also been progressively evolving her work. The results of that evolution will be on show this week in RIFE MACHINE – Emmaline’s latest exhibition, which doubles as the inaugural show to be held in ACE Across – the Project Space of new contemporary art institution ACE Open.

RIFE MACHINE opens this Thursday, May 25 at 5pm at ACE Across in the Lion Arts Centre. Emmaline will be in conversation with curator Joanna Kitto at 5.30pm, and the exhibition is on show until June 17.

“Prior to this show I was working only with self portraiture and images of my own skin rather than all these other different photographs of blood and water and stuff that are in this show,” says Emmaline.

“Those older works became a new way of interacting with and understanding my own body.

“And then I thought, ‘wow, that was a whole new relationship I could have with my own body, what if I can extend that to other people I know?’. In the near future, I’d love to maybe take photos of people I don’t know and see if that creates a new layer of relationship with them.” 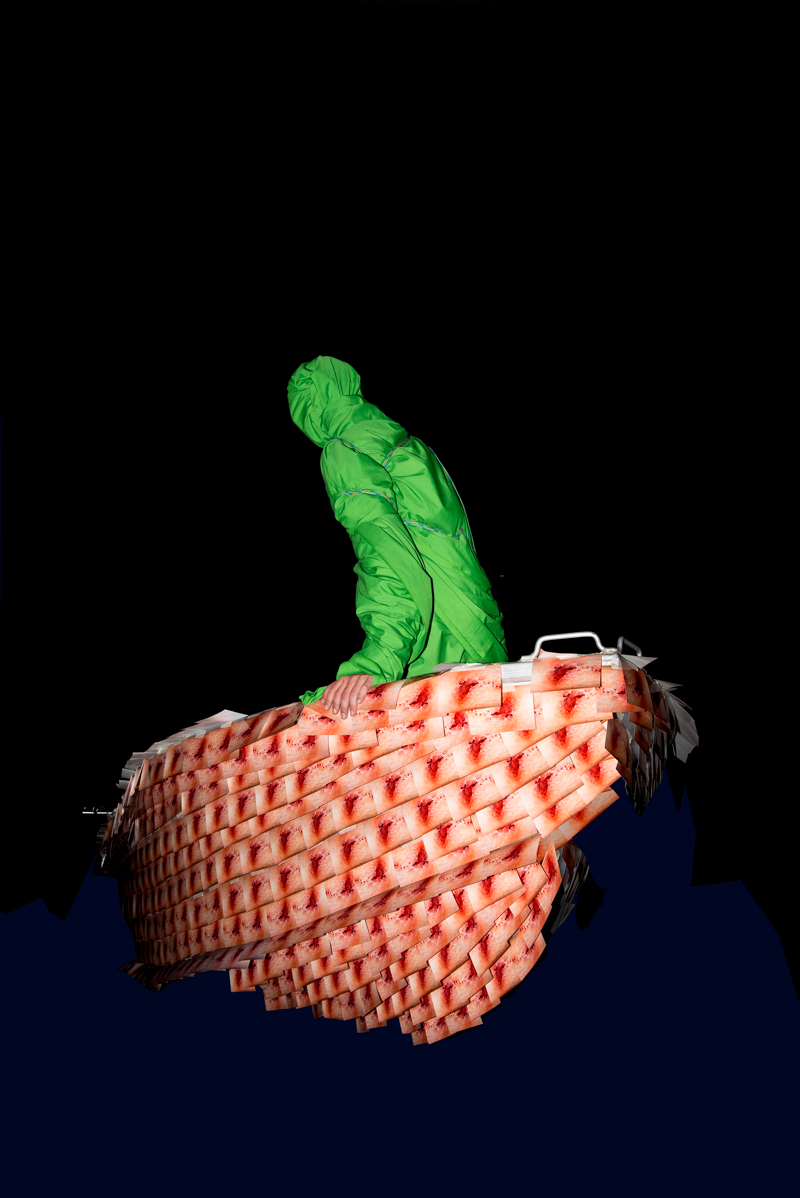 Accordingly, the pieces in RIFE MACHINE include photos Emmaline made with people from her life – her boyfriend, her friends, an ex-boyfriend, and her brother.

Engaging these people in making the works was – at first – an organic kind of experiment.

“The first photo was of an ex-boyfriend I hadn’t seen in a very long time,” says Emmaline.

“I said, ‘I’ve got my camera, do you mind if I just take a portrait of you?’. I just kind of wanted to explore a bit, so I said ‘I’ve got these pictures in my car, do you mind if I go get them?’. And then we ended up creating this work with all these photos of my brother gaffa-taped to him.”

Emmaline replicated the process of this initial experiment with others from her life, and found it led her to explore new questions about photography – including the way power balances can shift as people adopt the traditional roles either behind the lens or in front of it.

“The process of taking the portraits feels ritualistic,” she says. “And through experimentation with the people I love and have loved I found a power play and an element of ritual that was really interesting to me.”

Key to this method of working is respect for her subjects. Among Emmaline’s main concerns when making these pieces has been involving those she’s photographed in the process, to make sure they feel comfortable with the outcome.

“Each picture is the product of an orchestrated event involving images, locations, and references that are all very specific to the sitter,” she says. “They’re small rituals with or about the people around me.” 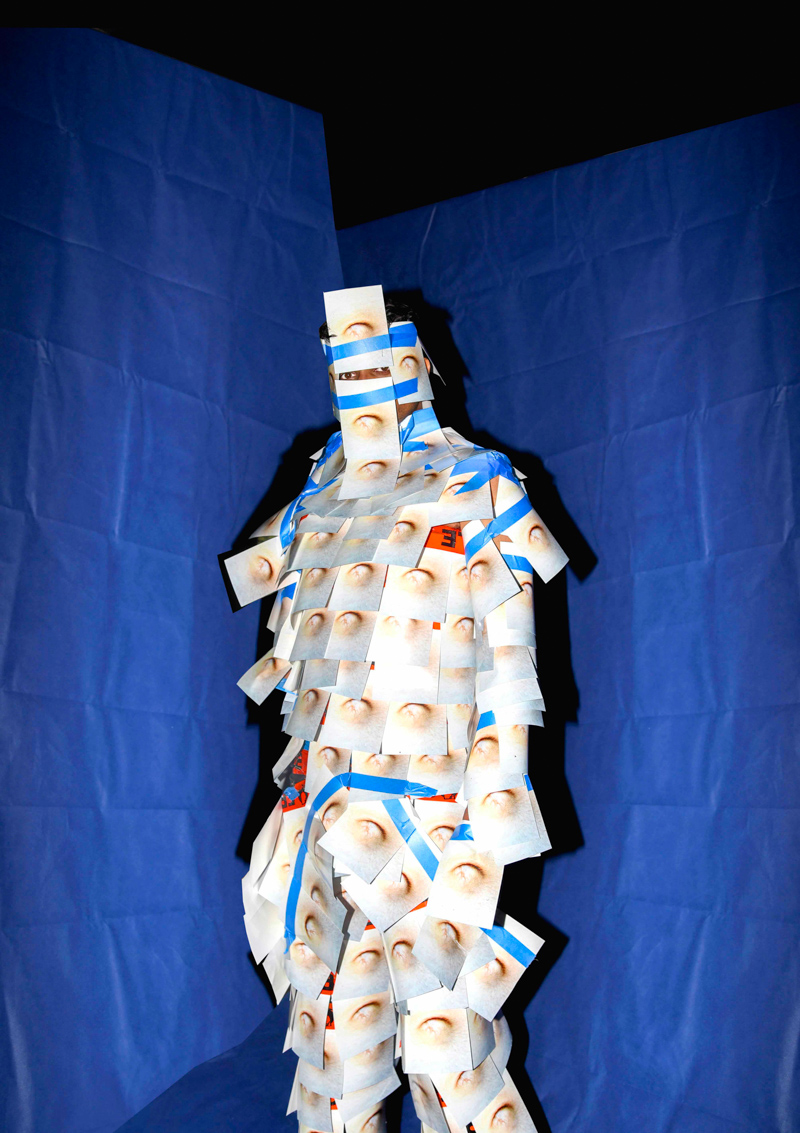 Another central concern for Emmaline is finding the balance between her private and public worlds. This has led to another evolution of her work that is evident in RIFE MACHINE – an increasing depth and number of layers in each image.

“I’d like to really build on those layers because they just become more compressed stories in that way,” says Emmaline.

“The element of having a person in there, and a collage environment, and then that sort of re-photographed, and printed, and re-photographed – it’s almost like in the narrative of the picture there’s elements of story.

“People might be able to decipher one element, like ‘I get that is her bellybutton’, then there’s the element of installation. So the more layers there are the more privacy I get – I can be super public with it, but when it’s all split up into these different elements, it’s almost like the more obscure it gets the more direct I get to be.”

But, even while blending the obscure with the direct, Emmaline is still concerned that there is a strong emotional connection with her audience.

“Even though they’re photos of my boyfriend and my ex-boyfriend, and my brother, or whatever, I hope I can kind of mash them up to a degree where there is an instinctive reaction to it that is the same emotion that I had when I was making it,” she says.

And it’s that search for relatability that makes the works in RIFE MACHINE so wholly compelling. 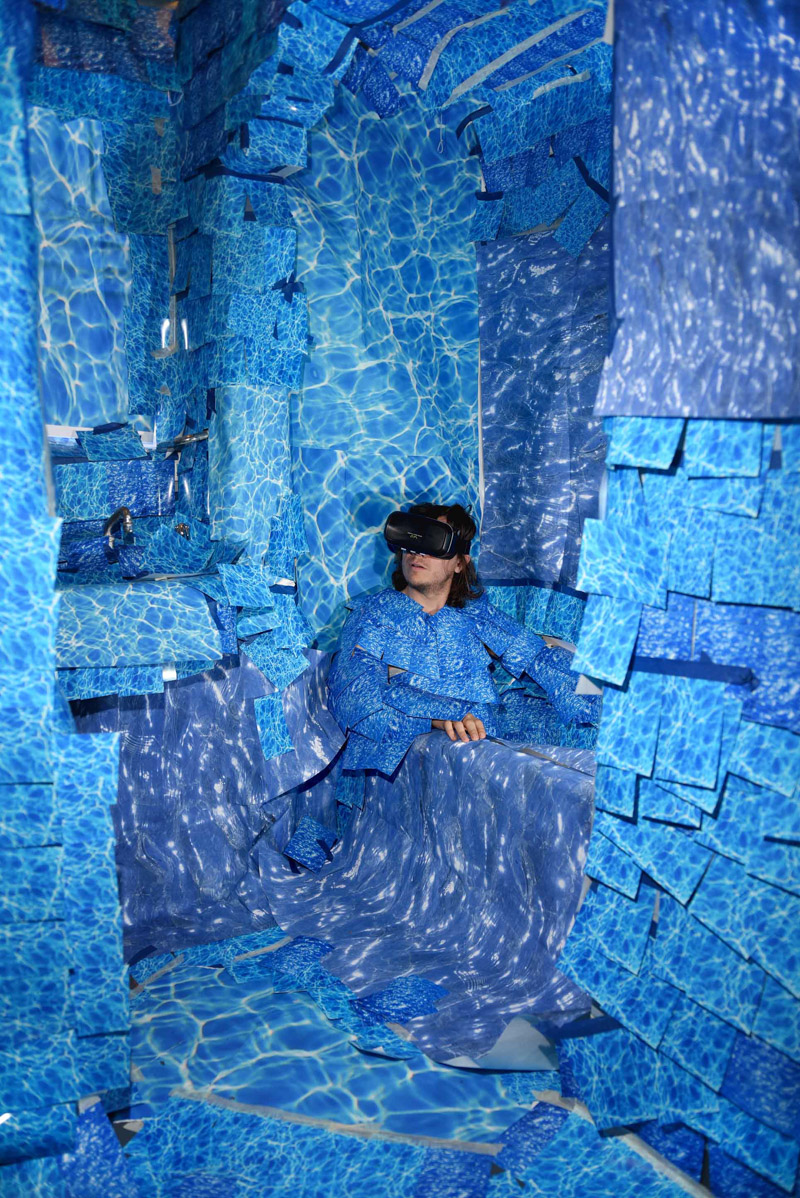