Art on the field: The Crows’ Indigenous round guernsey

This weekend, artist Allan Sumner is telling the stories of his people to tens of thousands of football fans.

Allan Sumner might only have come to full-time work as an artist recently, but the practices he draws upon in his creative process have been flowing in his blood forever.

“Up at The Coorong, the Murray Mouth is the Ngarrindjeri people,” says Allan. “That’s where my Father was born, in an Aboriginal Community just outside Meningie. And then we have Kaurna ties through that relationship – my Great Grandmother was a Kaurna woman.

“And then Dad’s mother – she was born in a little town just outside of Coober Pedy. So my Nanna she is a Yankunytjatjara woman. The practice of art in Nanna’s country is more around that dot art, so I felt a connection to that.

“But I use my practice to really look at incorporating those three people groups, their style of art, and put that together in my work.”

After more than 15 years working in Aboriginal health, Allan made the transition to working solely on his art – both as a musician and a visual artist.

And this Saturday, tens of thousands of people will connect with one of his pieces as it is displayed across the chest of every Crows player to take the field for the Sir Doug Nicholls Indigenous Round. 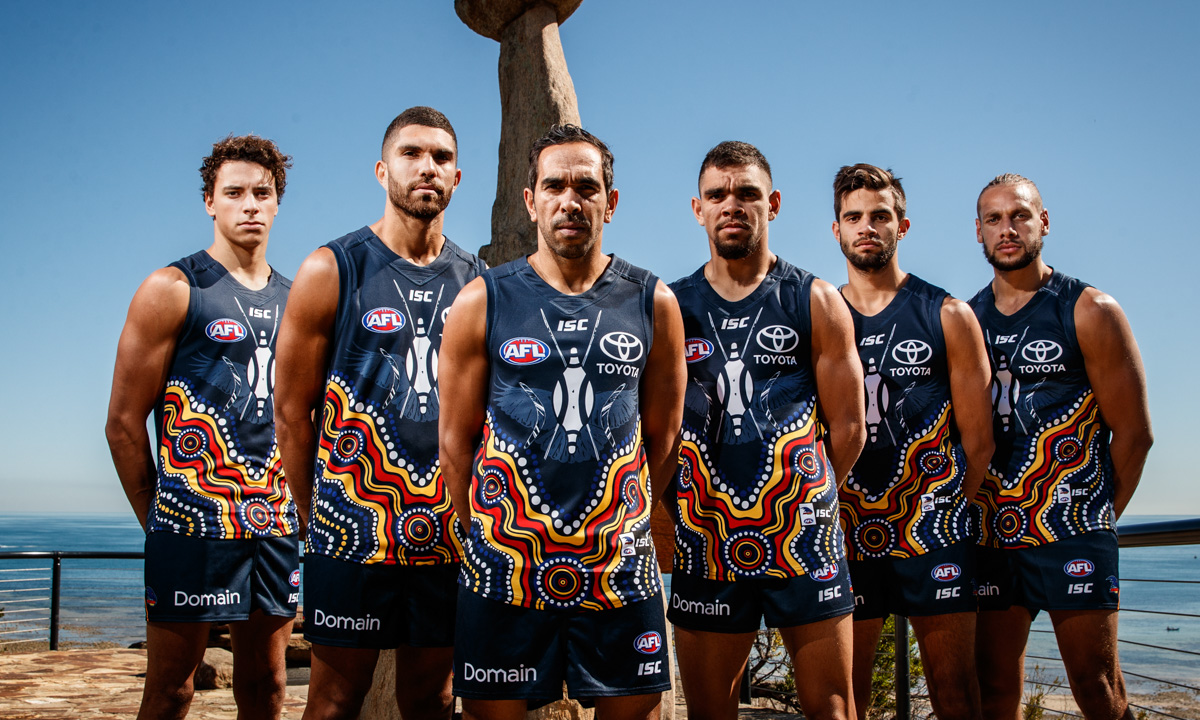 The design, which Allan evolved over more than six months, directly reflects the country and culture of the Kaurna people.

Central to the work is a shield, accompanied by spears and boomerangs – the tools of a warrior. While the main theme of the work plays off its title – Kuwa Irrapina Tuwila nakurri-apinga, which means ‘Awaken the Crow Warrior Spirit’ – many of the elements have deep and layered meanings.

“Traditionally, the shield, it obviously represents protection,” says Allan. “But it was also used by the Kaurna people as a means of identity as well. You have different Kaurna groups across the Plain and depending on what markings are on the shield – that was your ID. Because there was always crossing of boundaries and that kind of thing.

“We have different types of shield – hard wood shields, long skinny paring shields, and then this shield was most prominent simply because it was recorded by Norman Tindale. This one was a bark shield, so the bark was basically cut out and it just pops straight off the tree.

“This kind of shield is called a Murlapaka shield.” 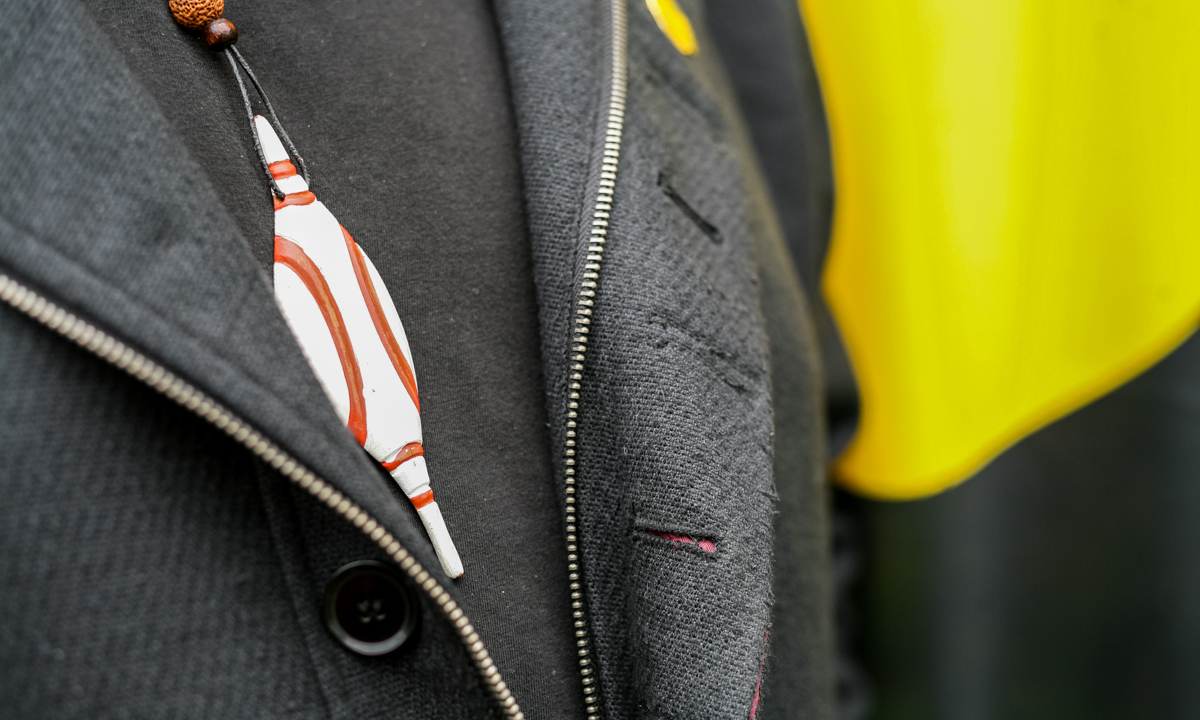 Allan wears his own Murlapaka

The geography of the Kaurna land is also reflected in the Guernsey, which displays three circles to represent the three most prominent Kaurna groups – central, northern, and southern.

“The red and yellow lines represent the land and the foothills,” says Allan. “So having the Plains going up into the Adelaide Hills. The white dots and the blue dots represent the waterways – so we have lots of rivers coming out, like the Onkaparinga River coming through, Karrawirra Pari – the River Torrens – coming through.

“I wanted to pick up the landscape in a sense but represent us as a people group.

“The dots also represent the forming of a people coming around – that sort came from the Crows slogan of ‘Together we achieve great things’.

“What we wanted to pick up was obviously the people from all walks of life coming together – from community, workplaces, the players at the games, the fans.”

In addition to having created the guernsey design, Allan is slated to perform on the Adelaide Oval prior to Saturday’s game between the Crows and Fremantle’s Dockers.

Allan will perform two songs on the field before the match, and sees his music as another chance to connect and communicate with a wider audience.

“I think as a musician I have developed skills around performance, entertainment, that sort of thing,” says Allan. “But I think in some sense its similar to the artwork because I do a lot of storytelling in my songwriting, and I have to use that same storytelling process in my visual artwork.”

So this Saturday, thanks to Allan, football fans around Australia will be hearing some of the stories of this land – twice. 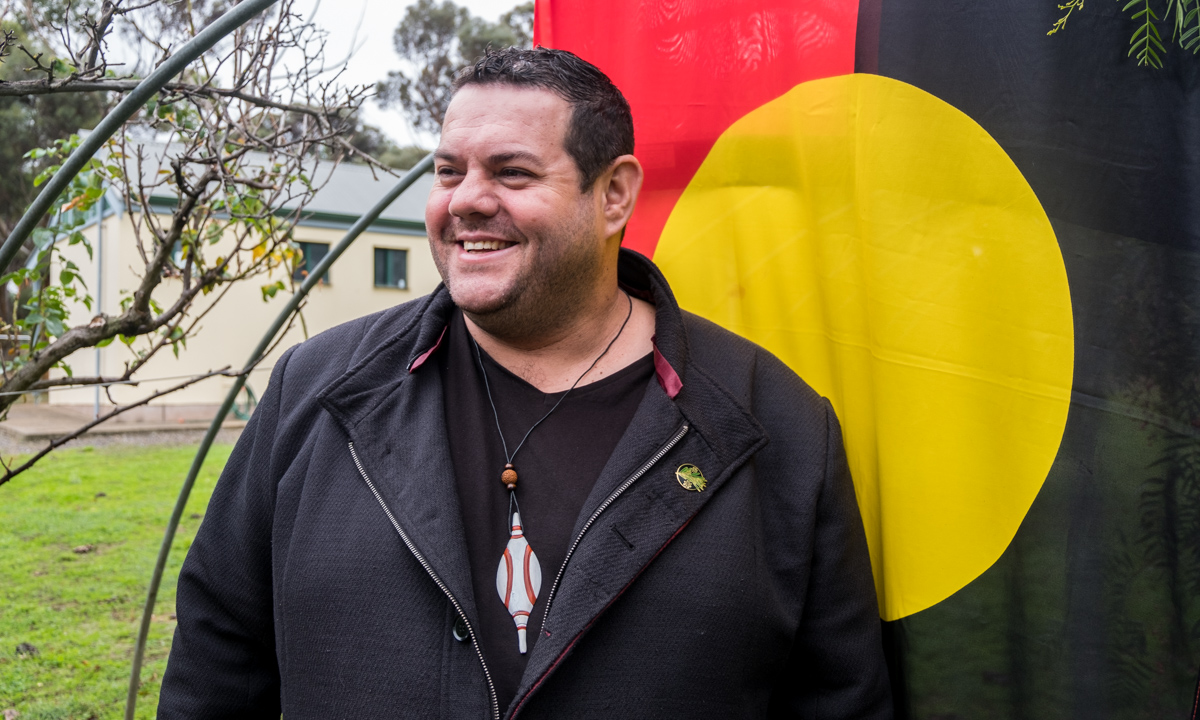 Introducing The Main Gallery: An arts space connecting communities between Adelaide and Izmir

The importance of image with music photographer Lauren Connelly