CityMag’s last night out with the Encounter Youth Green Team

On the eve of the coronavirus shutdown, CityMag spent a night riding along with the Encounter Youth Green Team. As our nightlife slowly reemerges, we look back on our last pre-corona night out in the city with nostalgia and hope for the future.

CityMag is on the streets late at night, trailing along with the Encounter Youth Green Team – that hoody-clad collective who roam the streets to ensure patrons get home safe (with emergency vomit bags handy).

The Encounter Youth Green Team have taken a little hiatus while the city sleeps during COVID-19.

This event was weeks in the planning, and little did we know how well we’d timed our tag-along.

It’s the final weekend of the Adelaide Fringe and only days before the South Australian Government imposes severe restrictions to limit the spread of COVID-19, essentially putting a cork in the city’s nightlife and killing our late-night fun for the indefinite future.

We don’t know at the time that this will be their last weekend on duty for a while. CityMag expects their efforts to be met with tension.

A teenager comes up to the group: “You saved my life.”

Our anxieties are slightly relieved.

“You guys were so good at Strawberry [Fields], thank you,” says another voice, along with an attempt at a high five.

“Mad respect for you,” echoes someone else.

According to their website, the Encounter Youth Green Team are South Australian Christian volunteers who “serve in local communities facing serious social challenges.”

The historic not-for-profit’s aim is to prevent harm. They do this by handing out free bottled water and lollies (Minties and the like) to revellers, referring individuals to appropriate services, and offering support to anyone they see in distress while wandering through Adelaide’s clubbing precincts and South Australian schoolies festivals.

Simon explains the Minties are often used as an engagement tool, to break the ice between the group and who they want to help. 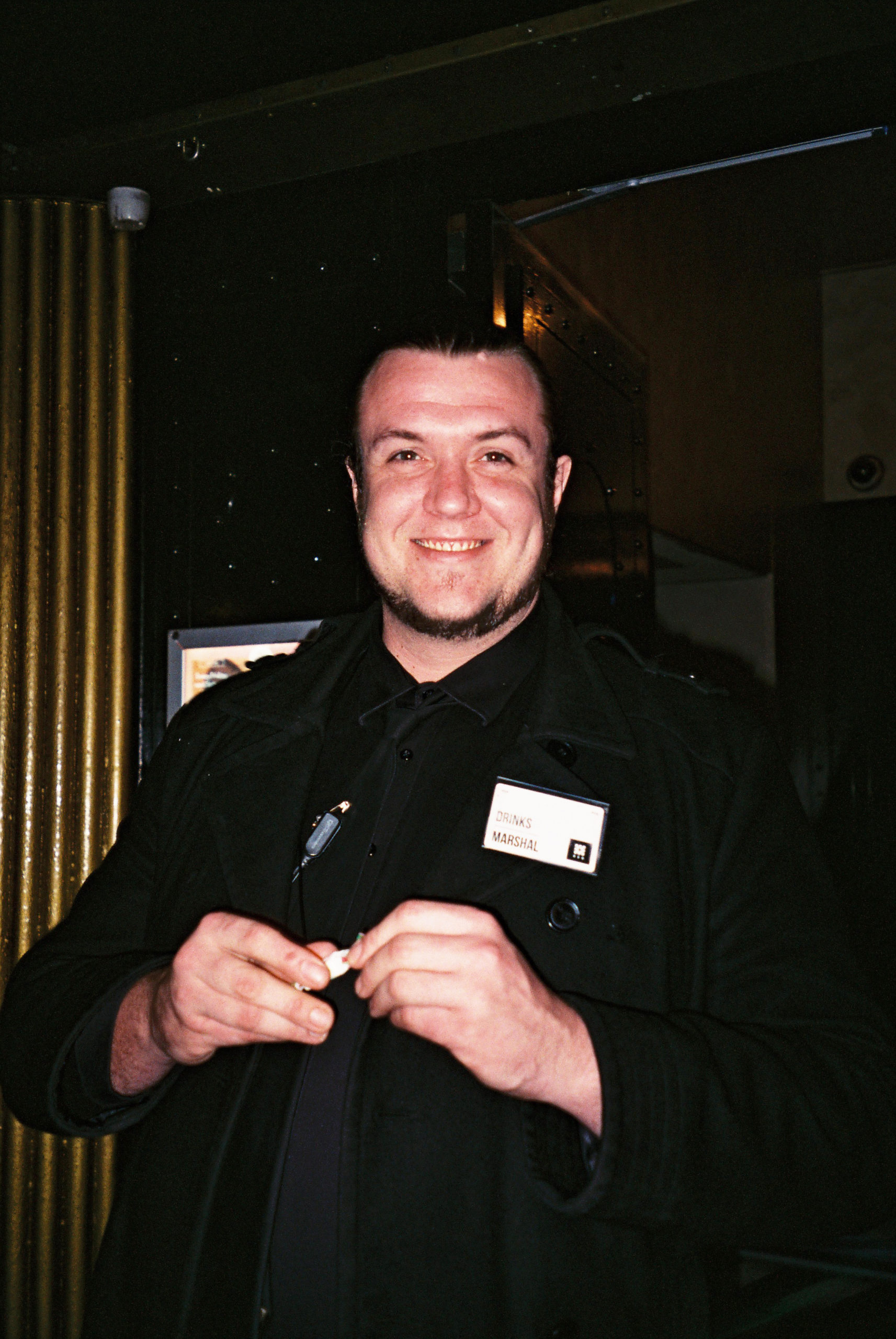 The bouncers on Hindley Street know the Encounter Youth Green Team, and aren’t aren’t afraid to ask for what they want: lollies

The Team’s intent, as outlined on their website, is to “model the servant heart and hand of Jesus to people who find themselves in compromising and challenging situations.”

Project and volunteer manager Ryan Scott says this is correct but puts it another way, by saying the Encounter Youth team are just there to help.

His team tonight – one of two Encounter Youth groups on duty – will travel six kilometres on foot along Hindley Street between 11:30pm and 5am.

Ryan, who’s also an avid soccer fan, says mental health support is a big part of the job description. While walking past a glowing McDonalds, he recalls a guy he found down a side street with his head in his palms. The Green Team will often look down alleys or backstreets to see if someone’s wandered off alone.

The guy wanted to take his own life, Ryan says. The conversation had stuck with Ryan for a long time. He didn’t tell us how the story ended, but he says that when they find people in similar states of distress, the Green Team will call relevant services.

The Green Team often works as an agent between people on the streets and government services. The volunteers are trained on how to engage in certain types of encounters and have to complete ongoing educational brush-ups throughout the year.

If someone on the street becomes violent, they do not intervene and call the police. No one in the group has been attacked. 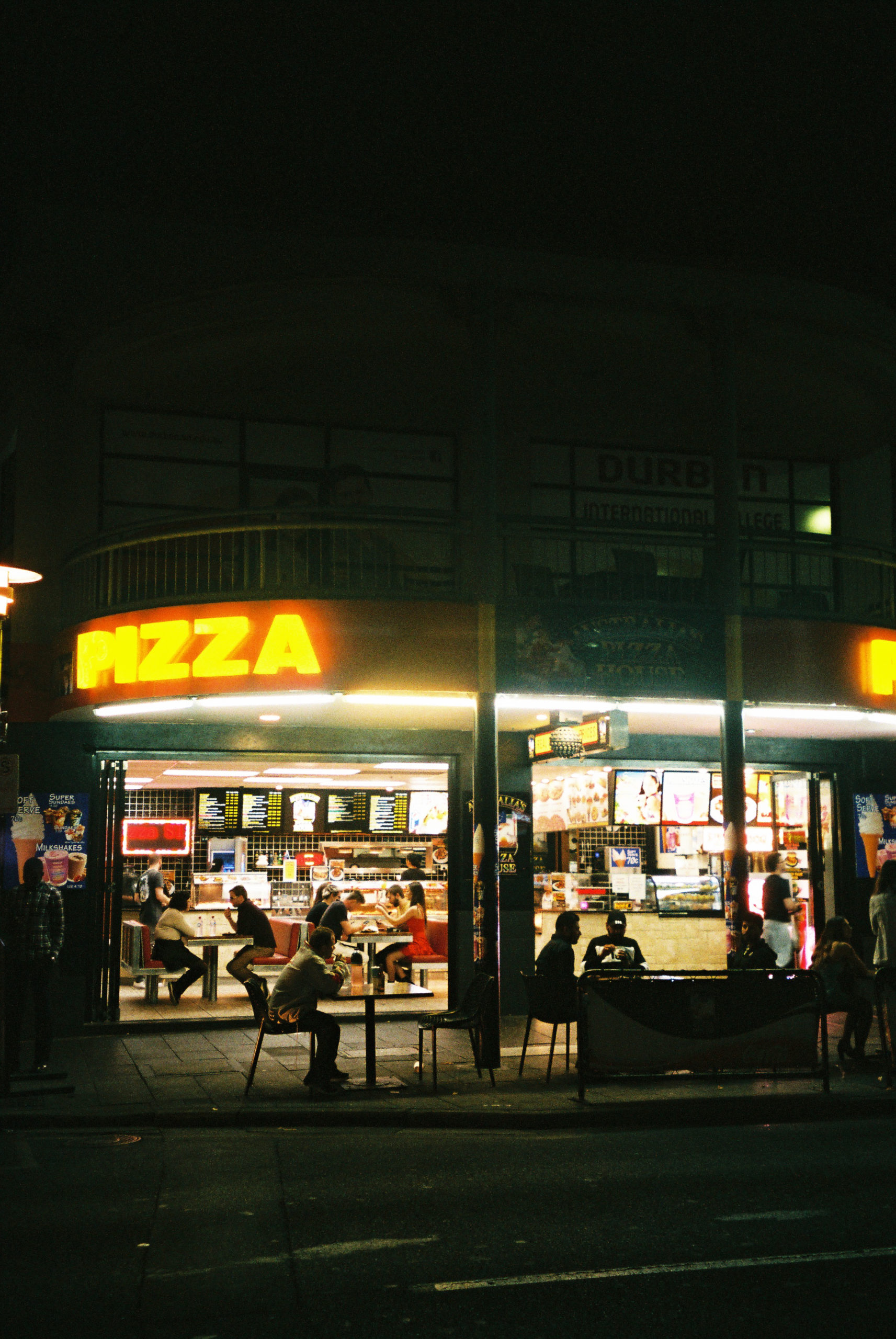 CityMag wanted a slice of ‘za halfway through the shift, but Encounter Youth Green Team recommended a can of Coke keep energy levels up

As we walk past Big Window, there’s a young man hunched over in the same position Ryan described earlier: head in hands.

Naomi, who is also a primary school relief teacher, bends down to talk to him.

While we wait, a person lined up outside the Hindley Street club claps Ryan on the back and demands a Mintie.

The guy crouched on the ground doesn’t want their help, Naomi says, and so they move on. We glance back and see him still on the curb, looking at the ground.

This is not the only form of Green Team support offered.

A young girl in a brown faux-fur coat stops us and asks for directions to the Lion Arts Factory. Instinctively, CityMag gives directions: “Go down and take a left.” But Ryan goes above and beyond, offering to escort the party-seeker to the venue.

We make our way to the Lion Arts Factory together. When we get to the venue, Naomi throws her elbow in the air to offer a hygienic goodbye to the girl, but she runs off to her friends in the crowd without looking back.

After an hour on patrol, CityMag clocks off. Naomi, Ryan, Rebecca and Simon drop us at Green Team HQ. 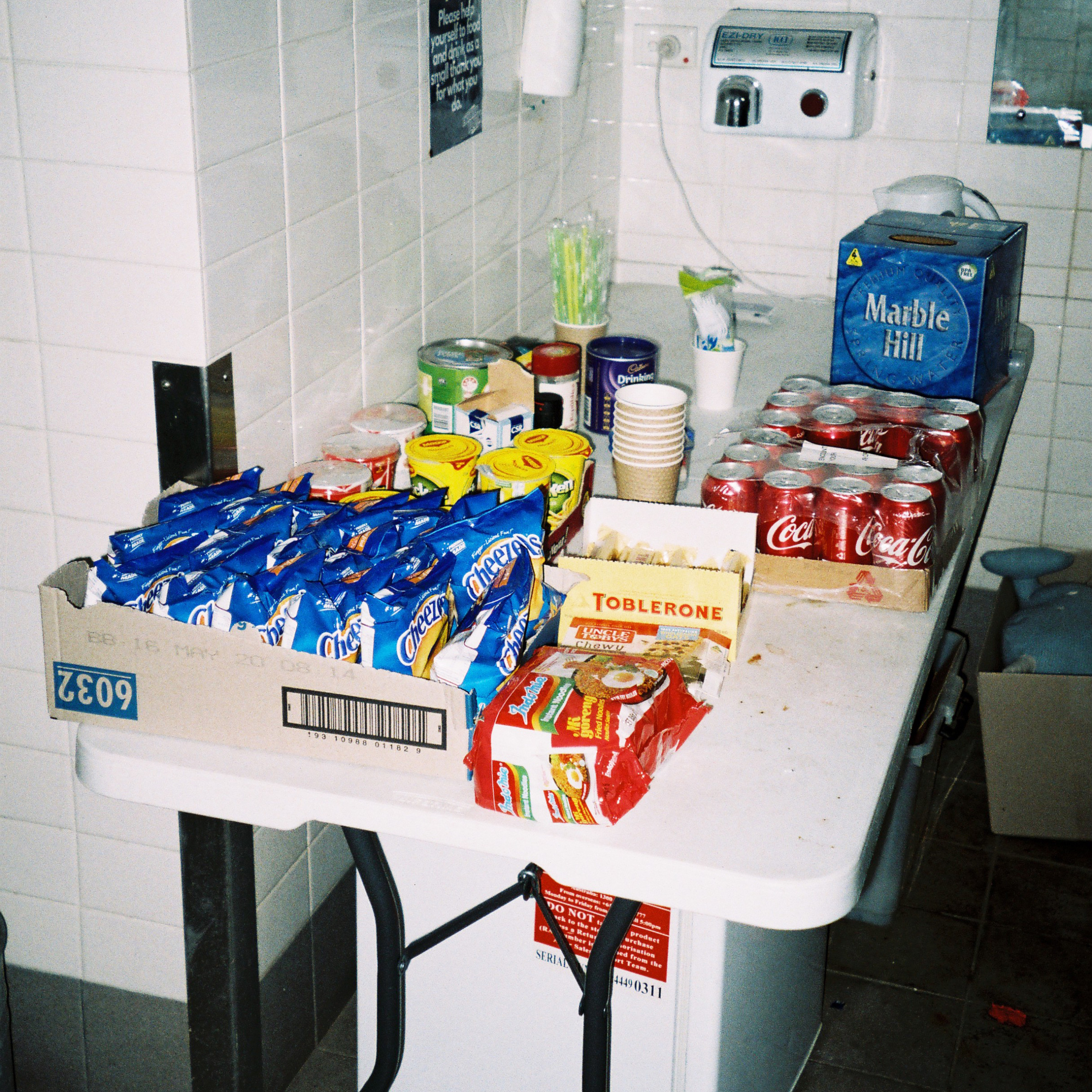 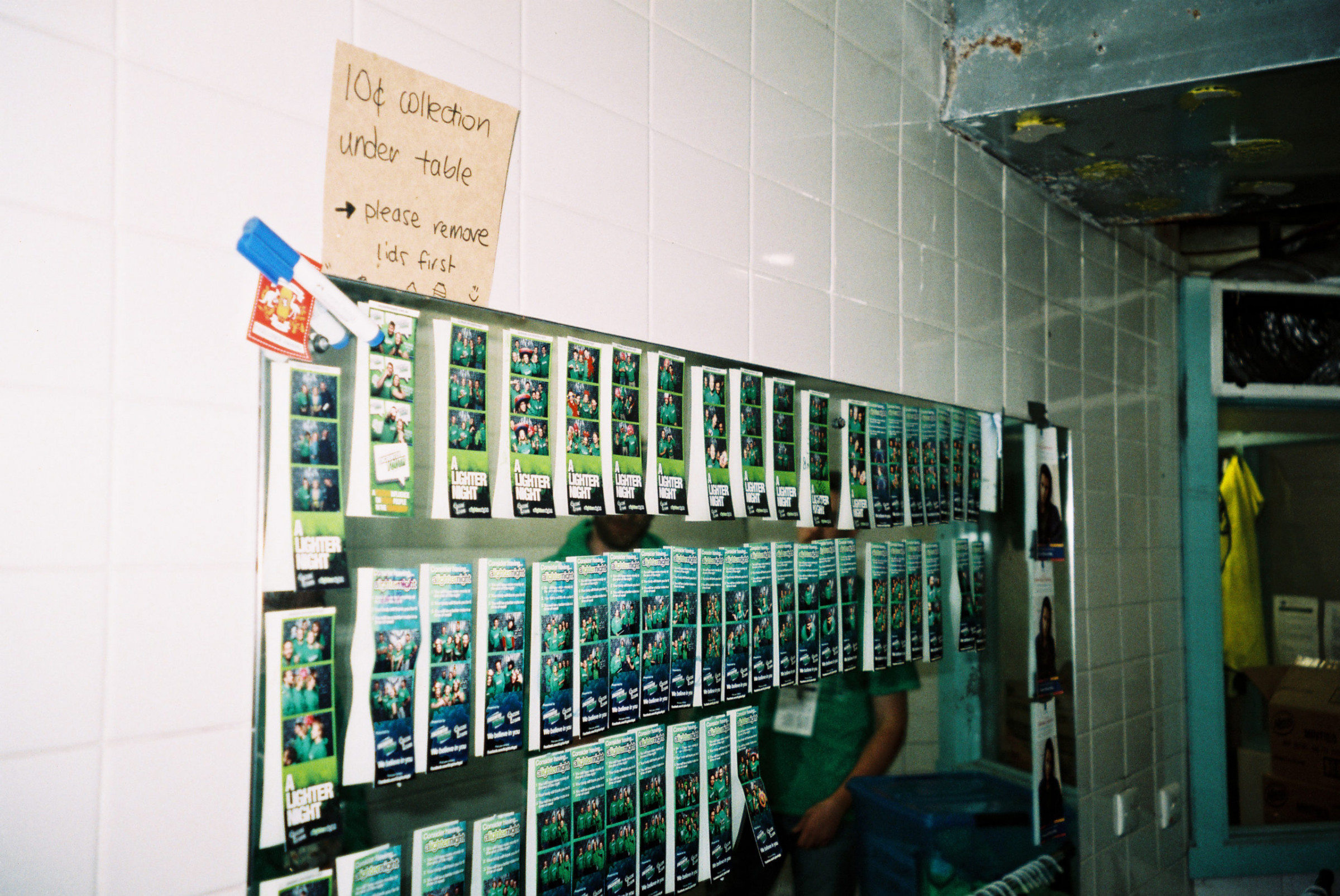 We’re shown the treats available during a shift to help keep the team’s energy levels up. A box of mineral water hangs over the edge of a table next to a stack of cups. It’s a stark contrast against the spaces the rest of Hindley Street’s patrons are heading into, which we’re much more familiar with.

CityMag asks what the quartet gets out of volunteering in this way, and they all mention a sense of community. They also just enjoy helping people.

For all their churchy origins, there is no compassionate grandstanding amongst the group – no burgeoning messiah complexes. It’s as simple as the Golden Rule: Leviticus 19:18, or Kant’s Categorical Imperative, depending on your spiritual and philosophical preferences.

It’s simply what friends and strangers alike should do for one another: give care to others as you would hope they would give to you.

If COVID-19 brings about any long-term changes to the way we go out in the city once public life fully resumes, we hope it’s that we all become a bit more like the Green Team.

With a few months passed since we last caught up with the Green Team crew, we reached out to Ryan to see what they were currently up to.

He said Encounter Youth is exploring opportunities to support young people online, and has some ideas for what the city would look like in the future.

CM: What are your predictions for Adelaide’s nightlife when restrictions ease?
Ryan: It is so difficult to know what a post-Covid-19 world will look like. We are anticipating that young people will be eager to celebrate the lifting of restrictions by returning to Hindley Street. Our volunteers will be there to support them.

When do you plan on returning to Hindley Street?
The Encounter Youth Green Team will be hitting the streets as soon as venues reopen and patrons return to Hindley Street. We’ll have new procedures in place to ensure that our volunteers are safe and well cared for.

Will the Green Team be attending schoolies?
At this point, Encounter Youth Green Team volunteers will be at Schoolies Festival™ 2020. Encounter Youth will continue to monitor and follow the official guidance from State and Federal Government and health authorities in our ongoing planning. We will take the necessary actions as required to ensure the safety of all involved.

Do you miss volunteering?
We really miss the opportunity to chat and support young people every Saturday night, and are looking forward to returning to provide our weekly volunteer patrols of Hindley Street when it is safe to do so.