Bec Stevens sings about heartache so you don’t have to

Ahead of her hometown show this weekend at Jive, CityMag spoke with Bec Stevens about the art of being brutally honest.

Late on a Friday afternoon back in March, CityMag meets with Adelaide-based musician and songwriter Bec Stevens, who’s come to the Exeter straight from working a shift at a café in the city.

When we speak, it’s just two weeks out from the biggest tour of the artist’s career – a month-long headline run in support of her recent EP, ‘Why Don’t You Just,’ stretching the length of the Eastern Seaboard, Tasmania (Bec’s home state), and finishing with a hometown show at Jive in Adelaide (happening this weekend, Friday, 3 May).

Despite the building pressure of the imminent road trip, Bec smiles brightly and laughs quickly throughout our interview – presenting a bright contrast against the picture we had of her after listening to her music.

‘Why Don’t You Just’ burns slowly, moving from grungy anxiety anthems to heartbroken ballads, all written with a self-reflective earnestness and honesty that is also part of Bec’s off-stage identity.

Predominantly, the record deals with break ups – lingering ghosts of abandoned connections and mid-relationship revelations – with lyrics that attribute blame, accept fault, and hint at a desire for self-destruction. It makes for an intense 25 minutes of music.

“My mum is like ‘Can you just be a little more subtle. You always say things that I don’t want you to say,’” Bec laughs.

“But that’s just what I have to do, and it resonates with people.

“I think it’s important sometimes to just say it how it is, because people need to get that out. And people that don’t write songs, and can’t play music, and don’t sing need to be able listen to music that helps them go through that, I guess, and feel it.”

Bec grew up in Beauty Point, a small town about an hour north of Launceston, Tasmania, but her ambition quickly saw her outgrow her hometown.

She had begun travelling the hour to Launceston for college (year 11 and 12 in Tasmania) and was goaded into busking by friends, developing a habit that saw her playing from when school finished until sunset.

“I didn’t care about the money at all, I would just stand there for hours. It would be getting dark and my parents were like ‘You’ve got to leave. You’ve got to come home,’” Bec says.

Growing up, Bec admired narrative-driven songwriters who could conjure stories from feeling rather than experience, but her own writing process is more exorcism than invention.

“I have to be coming from something that’s really happened to me,” she says.

But coming from a supportive household in a supportive small-town community made source material difficult to come by.

“My first song, which was a love song… It’s so bad,” Bec laughs.

“It has a line about the Titanic in it, referring to Rose and Leo. It’s a terrible song, but for a 16-year-old who had never written a song before, it was pretty good… I guess I was 16 – what am I going to write about? ‘I had a pretty great upbringing, everything was fine.’”

It wasn’t until her first interaction with heartbreak that Bec began to find her voice as an artist.

“I just turned 19 and I got my heart good and proper broken, and I just started to go through experiencing depression for the first time and not really knowing what that was, and living in a really small town and feeling like I couldn’t grow. Feeling all of this stuff, going to therapy for the first time,” she recalls.

“My housemate at the time, who’s an amazing musician, I was just like ‘I need to get this thing off my chest and I don’t know how to do it,’ and he said ‘Just be honest.’

“I was, and the song was so brutal, and he was like ‘Oh god,’” she laughs. “But that helped me heaps, and now, within reason, I just need to say whatever it is that I feel, because that’s what people want to hear, the hard truths.”

At around this time, Bec moved to Adelaide. While we have a tendency to play our city off as big country town rather than big city, it was still a huge leap from Beauty Point, a town of 1200 people, and even Hobart, where Bec had been living.

“Not knowing anyone, it was just amazing to know new people and not be like ‘Oh, you dated this person, or you’re related to so and so,’” she says.

“Which, now Adelaide like that, but I’ve lived here for nearly six years, so it’s ok.

“I do see the size now, but also I still really love it here. Because I’ve been planning to move for a few years now, but then I don’t know. It’s a really great place. It’s just got everything you need.” 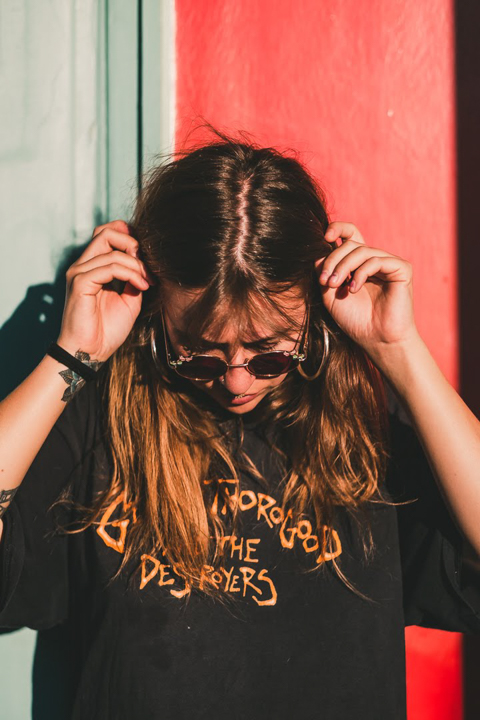 Bec released her first EP ‘More Scared Than You’ in 2016, and had planned to follow it up with ‘Why Don’t You Just’ in 2017, but a string of unfortunate events – including her drummer quitting on the second day of recording – led to a two-year delay.

“Two thousand seventeen was just a bad year, just lots of things in my own personal life was going on, and it was chaotic,” Bec says.

“It was really hard to release it, honestly, because it had been so long, and I’d heard it so many times, and I knew how much crap was attached to it. So much pain and shit that had happened. And I was embarrassed about how old the songs were, but my label and my management were super amazing.

“It’s a huge sign of growth for me, because the stuff that I went through during it, and how I changed, the person that I was when I started it to who I am now. Definitely. I’m very proud of it, in that sense.”

Before we leave, we ask Bec about how she’s feeling about the tour supporting the record. It’s been well received so far, including national airplay. Still, she’s nervous.

“People are like ‘Bec, your music’s doing so well, you must be thriving.’ I’m like ‘I know! This is the poorest I’ve ever been in my entire life,’” she laughs.

“It’s just one of those things that you have to do. If I put this record out and didn’t tour straight away, then it would just fizzle and disappear, because that’s what happens. Social media can only do so much.

“In the long run I would just be kicking myself if later in life I had never pushed this record because of ‘Oh, but I’ll be really broke.’”

Today, the bulk of the tour is over, with just the Adelaide show to go. We imagine it being a welcome return home, after a month spent on couches across the country.

After her Friday night show at Jive, there will be a small period of recuperation, some time away with her family in Tasmania, and the process of creation will begin again – hopefully this time without the delay.

“It’ll happen, but I’m not going to force it to happen just because we feel like we need to, because then it will end up being just the same as before,” Bec says.

“I’ve nearly quit so many times, there’s been a lot of stuff, especially in the last few years, a lot of heavy stuff has happened in my life, and some of it revolves around music, and it’s left me unwell and really unhappy.

“Sometimes it gets to a point where I’m just like, I love this thing and I want to do it, but not at the expense of my wellbeing, or other people around me.

“[But] all it really takes is for me to either play a really good show, or have some stranger come up to me, or post something on the internet, or message me just being like ‘I was really struggling with my mental health, and I didn’t want to be here, and your music really helped me.’

“Music’s a big part of my life; when I’m not playing it, I’m always listening to it, and it’s always really emotional music that actually means something to me, and it changes me completely, and it helps me through things, so knowing that I can do that for someone else is ridiculous. So I’ll do it as long as it makes sense.”