An early memorial for the Climate Century

In Climate Century, Port Adelaide-based arts organisation Vitalstatistix has commissioned a series of works exploring how we might cope on a ravaged Earth, and how we will be discussed by later generations looking back.

The oft-spruiked benefits of hindsight, by nature, come too late.

In memoriam we collectively remember our foibles and strive not to commit similar mistakes (or deliberate actions) in the future, and, arguably, in the case of the Centenary of World War One, we have refrained.

But there are great harms occurring to our planet and lessons that seem not to have sunk in, despite decades of environmental messaging, perhaps because hindsight doesn’t present itself during debate, but only once damage is unarguably and irreparably done.

In 2013, while reflecting on the then-upcoming Centenary Project and the climate discussions of our current age, Emma Webb, director of arts organisation Vitalstatistix, started thinking about how we might be memorialised 100 years on.

From that kernel of thought has come Climate Century: a five-year project that culminated with a three-week festival of climate change-focussed art from 8-25 November.

“With the latest report from the UN, we really have reached, if not gone beyond, the tipping point around climate change, and I think the conversation around survival and reinvention and grief and justice and climate justice has really sharpened in the last five years, and that’s definitely reflected in the art… in this year’s program,” Emma says.

In its final week, from Thursday, 22 November, artists will take those in attendance through adaptations and survival scenarios that imagine a Waterworld-like future and other post-apocalyptic landscapes, installations of an engineered sky, and a battle between a collective body and a “climate centurion monster who has come from the depths of Oceania.”

“This kind of art sits in a really interesting place where it can be quite conceptual and playful with people on the one hand, but is really deeply embedded in real issues, such as climate change, and the real experiences of the artists themselves, in terms of their roles in things such as campaigning for climate justice, [and] working with communities around adaptation models,” Emma says.

“I would hope that people might go away and think about some of the politics of strategies to change, to adapt and change to climate change in different ways.” 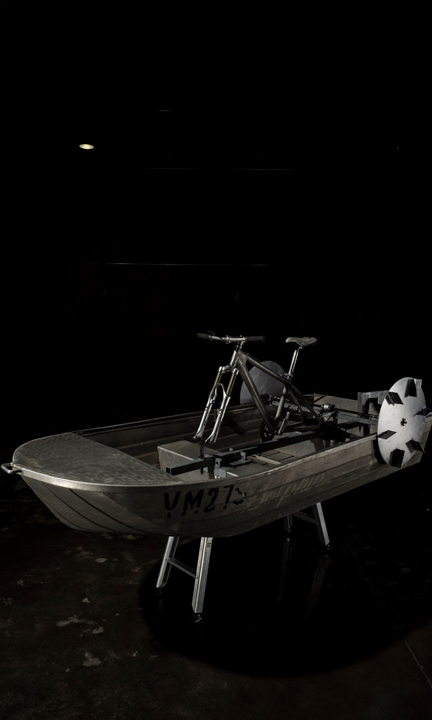 River Cycle – an adaptation for a world underwater.

Raft of the Medusa.

Ali Gumilya Baker and Simone Ulalka Tur founded Unbound Collective with Faye Rosas Blanch and Natalie Harkin in 2013. The four artists formed the collective while working in Indigenous education at Flinders University and their works follow themes they also teach within the university.

“We wanted to talk about institutionalisation for our communities, because part of the work that we teach is around the impact of colonisation and institutions, of collection and of knowledge of culture, and how those institutionalised ideas impact on our bodies as a form of ongoing colonisation,” Ali says.

“Artists can be very, very brave and speak about things in ways that allow people to have a conversation that’s de-personalised in a way, but it’s very personal at the same time… You can circle a conversation in a way that you wouldn’t be able to if you were just in other areas of education or politics – people might switch off.”

The second act was performed in 2015 at Tarnanthi and “was about being outside of those walls, outside of the collections, and shedding those oppressive ideas,” Ali says.

“And speaking back to the institution, but also engaging in a performance beyond what we are told,” Simone continues.

For the third act as part of Climate Century, Unbound Collective explores two readings of the title, REFUSE, as both resistance and of waste.

“It has that double meaning, which is resistance and a narrative of we do not want to participate in the conversation in the way that it’s being laid out, but it’s also about mourning the wasting of our country, and the wasting of the Earth’s resources, the wasting of our children’s futures, and also squaring off on that and thinking about how we can refuse that process to continue,” Ali says.

“As an Indigenous women’s artistic collective, it’s also about really acknowledging the strength of a collective, but also the responsibility that we have to each other and to our community and to our country as Aboriginal women,” Simone says.

REFUSE will draw on the history and stories around Yerta Bulti Port River, and the history of nuclear campaigning from generations past.

“I’m particularly interested in the ongoing proposals in relation to nuclear repositories within South Australia, and acknowledging and honouring the campaign by some of the senior women in my communities as part of the Irati Wanti Campaign, which was in the late 1990s and early 2000s, where the Coober Pedy Kungka Tjuta actually campaigned against the government to actually stop a waste repository proposal, and they succeeded,” Simone says.

The work will be multi-disciplinary and draw on the four women’s talents in visual arts, filmmaking, poetry and performance, which makes Vitalstatistix a perfect fit for Unbound Collective.

“They’re really great at funding development, so they actually commissioned us to create the work over two years, so it’ a really great process for us.”

As for the rest of the works, Emma stresses they are “very beautiful and very moving, but they’re also very accessible. They’re accessible and they really will give you an experience that will make you think about climate change in different ways.”

For more information on Climate Century, to purchase tickets, or check out the roster of free events happening up until Sunday, 25 November, visit the website.