Alex Rossi has your late night party down pat

He's played with George Clinton and Parliament, and when he was 19 he got to play Prince's guitar at a house party. Alex Rossi is bringing the Minneapolis Sound to Adelaide with a bunch of guest acts to rock the Garden of Unearthly Delights every weekend.

We call Alex Rossi’s US cell number and after more than a few rings the phone at the other end is picked up.

Of course he is. He’s bloody well playing his show tonight in the Fortuna Spiegeltent in the Garden of Unearthly Delights: Alex Rossi & Friends: The After party!

Fringe is like that. It’s on the horizon for so long and then bam, it’s here.

Alex has shaken the jet lag and is looking forward to his full season of weekend, late night party gigs in the Garden. This show, in particular, is exciting to the Minneapolis native because it brings back a formula that worked so well in Edinburgh five years ago.

“I’d taken another project to Edinburgh in 2014 called Rhythmic Circus. It was fun but I was keen to also just do more of what I do back in the States, which is front a band and play straight music,” says Alex.

The gig turned into an after party that happened repeatedly throughout the Fringe season in Edinburgh and brought other acts on stage to party with him, such as Tom Thum and Lady Rizo. 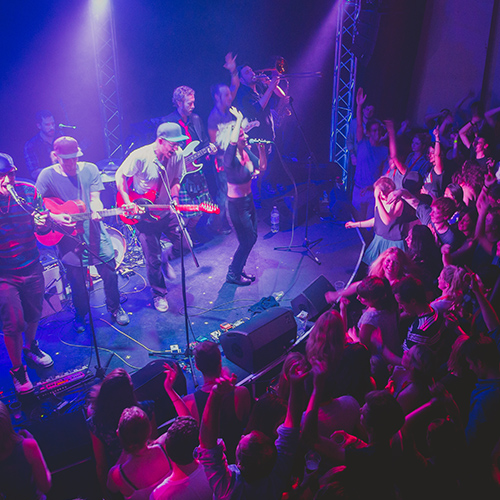 “We still talk about it now,” says Alex of his experience putting on The After Party in Edinburgh. “We were all chatting online and kind of agreed to look into doing an After Party in Adelaide.”

Alex’s music is a true product of the Minneapolis Sound – a genre of music pioneered by Prince in the late ’70s and made famous throughout the ’80s for its combination of synths with R&B and funk.

“I’m blessed to be born and raised in Minneapolis,” says Alex. “Prince let me play his symbol guitar when I was 19 at a house party. You know the symbol guitar? When Prince had no name and was going under ‘The Artist Formerly Known as Prince,'” says Alex.

The authenticity of the Minneapolis Sound is found in the dedication of its musicians to the scene and to supporting each other.

What gets CityMag most excited for Alex’s show is his desire to connect with the local scene in Adelaide and bring our sound onto his stage and give it global context.

“I have a friend who moved to Adelaide – of all places – a year ago and he’s given me a line into the local scene,” says Alex. “My regular bassist can’t make the first week of Fringe, so we’ve got a local on bass and he’s great. I want to do more of that,” says Alex.

“To have that connection to the city? Man, it’s the cherry on top.”

And that’s saying a lot. Because, while Alex was not going to confirm or promise anything, he did mention that George Clinton (with whom he’s played) is going to be in Adelaide during the Fringe Season and he was going to get in touch with the Funk legend and see if he’d like to jam at an After Party gig in the Garden.

“Red Hot Chilli Peppers are in town too,” says Alex. “I’ve met Anthony Kiedis and I’ve got a connection in LA to a guy, who’s kind of a big deal in the music scene, and I’m gonna reach out to him and invite Anthony to a gig.

“It’s not like back home,” says Alex about the realistic potential of Anthony Kiedis and the RHCP playing an After Party gig.

“Back home there’s no way a main stage act would play a stadium and then go out to a small club, but this is totally different. Adelaide Fringe is such a unique experience and I don’t think it would be unrealistic that those bigger names would enjoy going on a bit of an adventure, all in this lit-up fairytale garden.”

Alex Rossi & Friends: The After Party