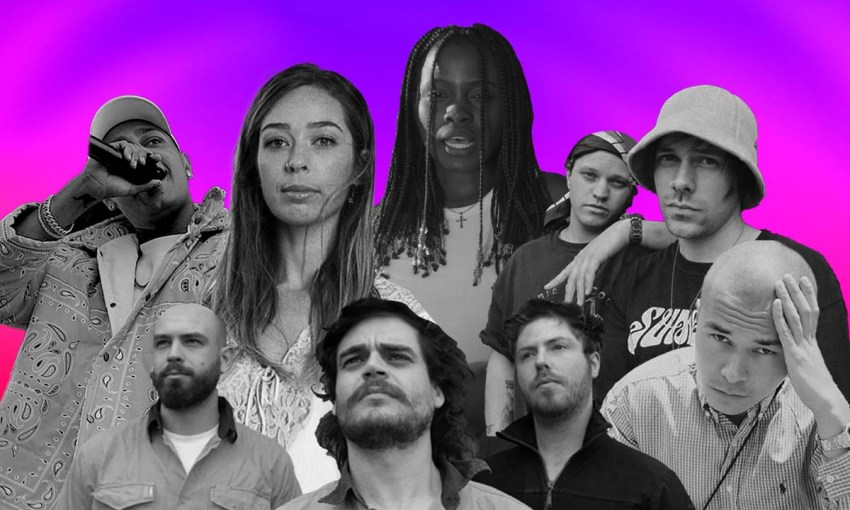 In case you missed the message the first time, a new Elsy Wameyo has arrived – an Elsy with a startling dead-eyed confidence. ‘River Nile’, which is produced by Elsy (she also co-directed the song’s video clip), flows on from last year’s ‘Nilotic’, which are both taken from the upcoming Nilotic EP.

Listen to this playlist in full on Apple Music or Spotify.

Earlier in her career, Elsy leaned on her chops as an R&B singer, but ‘River Nile’ is made up almost entirely of rap verses, with small pieces of sung melody rising above the jacked production only every so often.

There is solemn anger and an edge developing in Elsy’s Nilotic tracks, and CityMag is excited to hear more. Elsy is playing at WOMADelaide, on Sunday, 13 March, at 5:15pm on the Zoo Stage. If you’re around, be sure to stop by. (JVE)

‘Big Rev Kev’ – the newest single from rock four-piece St. Morris Sinners – sounds delightfully similar to the dusty, Akubra-wearing Cruel Sea. What this song can call its own, however, is a zigzagging shift between grit-licked guitar riffs and lyrical imagery to make a revhead’s mouth water. The single comes ahead of the release of their upcoming album żbilanċ, slated to go wide on 18 March. (As an aside, we’re also a fan of the hi-vis tradie aesthetic). (AS)

Who knew Memphis rap would find its way to Adelaide? The haunting keys on ‘Adelaide Alchemy’ – the second track from hip-hop musician Claz’s recently vinyl-minted record The Son of Lilian – resembles something sampled from a horror flick. With muggy bars like ‘dropping bricks to stop that issue so I can feel my face’ we get a sense there’s something lurking beneath this rapper’s surface, too. (AS)

Everyone knows Xavier Rudd. Adelaide-based rapper J-MILLA, on the other hand, is a nascent local talent garnering a reputation for delivering prosaic hip-hop revolving around his experience as a Mak Mak Marranunggu man. J-MILLA’s feature on Xavier Rudd’s new single ‘Ball and Chain’ is as powerful as it is plangent, as he waxes lyrical about discrimination, colonisation and prison reform. (AS)

We’ve never experienced the state of nirvana – nor have we ever come close – but we imagine it sounds like ‘See the Sound’. The latest hip-hop infused single from Alnitak Kid and CityMag favourite Cazeaux O.S.L.O is filled with transcendent chords, pillowy pads and luxurious textures. The pitch-shifted singing adds another layer of mystique, making this an opaque and other-worldly listen. (AS)

On a bed of Tribe-style languid beats, Nelson’s reference-heavy rhymes ring with cerebral sentiment and street-smarts, much like the song’s title. And even though it’s rumoured ND is leaving South Australia soon, he can’t seem to shake our colloquialisms, dropping ‘tall poppy syndrome’ in there for good measure. (AS)

Hear us out. The first 30 seconds of the single ‘Freak$’ by Adelaide rapper and producer Sacredd might not hit right initially, but the remaining two minutes – filled with drill 808 beats, staunch raps and satisfying car skrrrrrt samples – makes this a murderous track. Sacredd is producing savage sounds from the postcode 5000’s suburbs. (AS)

CityMag loves Tkay Maidza. We’ve been stomping along since her ‘Brontosaurus’ days, and have watched her rise beyond the local stratosphere and into the global limelight with glee and admiration. With ‘Hazy’, which was released with US artist Kyle Dion, we feel it may be appropriate to release her (at least in our minds) from the category of ‘Adelaide artist’ and accept that she has become something else – something larger and unable to be defined by geographical location. She recently opened for Billie Eilish on five dates of an arena tour! This is the mark of an artist who is now defined by their name alone.

Though we may not list you in our humble little music roundup in future, we love you Tkay Maidza. We hope to see you for a hometown show sometime soon. (JVE)

Written and produced by the artist herself, Jess Day’s latest single, ‘Gravity’ deals with themes the songwriter has a long history of delving into – love, relationships and the perils therein. But where her previous releases have been anchored by quiet moments of introspection and sorrow, ‘Gravity’ blasts with bombast and a sense of optimism that should make for a different kind of live Jess Day experience. Jess is heading out on a four-date tour throughout May, culminating with a show at Jive on the 28th. Grab your tickets now. (JVE)

The latest from Natasha Bianca is a smooth pop-R&B slow jam. With vocal-centric production and a sparse back beat from Chunkyluv, ‘Missing You’ has a pulsing longing reminiscent of the best kind of Ariana Grande ballad. There is also a beautiful music video shot ocean-side, made with a couple of CityMag mates (shout out to the good work of director Morgan Sette and stylist Sharmonie Cockayne). (JVE)

Triple J Unearthed alum George Alice released her debut EP, Growing Pains, midway through February, which is mostly a compendium of previously released songs. There are a couple of new tracks in the release, including CityMag’s favourite – ‘Nervous’. Much of George’s career has been the artist documenting her coming of age in real time, and ‘Nervous’ follows this lyrical theme: ‘When I’m older/I’ll understand/But for now I need some kind of holding hand’. The track also features the patented big production and soft-spoken George Alice delivery. George will be touring throughout March and April this year, including one date with Allday at Thebarton Theatre. Tickets are available here. (JVE)