'Immersion' is a new digital artwork launching in Light ADL's new cutting-edge immersive technology room The Ellipse, which will put audiences in digital rainstorms and evolving landscapes to show how water has shaped South Australia over the last 50 million years.

In a small room on an upper level of Light, the multimedia arts venue on Light Square, exists 50 million years of water.

CityMag is hosting a reader preview of the Immersion experience at 4:30pm on Wednesday, 3 November.
Register your interest via email here.

The rounded corners of the technological space, called The Ellipse, are constructed of a wholly enveloping LED screen, on which the story of water on the South Australian landscape is being told in an entirely new way.

Called Immersion, the work has been put together by event director Nathan Bazley and a tech team made up of people from the gaming and film industries, and it makes use of a world-first combination of technologies.

More than just a 25-minute film, the immersive and interactive 50-million-year journey uses gaming tech to make elements of the story on screen interactive, meaning the story runs in real time and will respond to the movement of people in the room.

This is built upon with the surround sound system, which is being installed on the day CityMag visits, consisting of 24 speakers.

“That’s going to make quite a bit of noise,” Nathan says, as we take a peek into The Ellipse.

Nathan first started utilising immersive technologies to tell stories while working as a journalist for the ABC. He was the executive producer of the Kokoda VR project, and it was while he was working on making 3D models of rock art sites for an educational app that he met the founders of Light, Nick and Sophie Dunstone.

“I was talking to them about that project, and we ended up getting side-tracked on all sorts of other dreams and plans that they had for this space,” Nathan recalls.

Eventually, Nick and Sophie reached out to Nathan to bring him into the venue to help bring The Ellipse into being and to create works for it.

Though the advanced technology of The Ellipse is a significant part of the project, Nathan hopes that it becomes little more than an afterthought for audiences heading along to Immerse.

“We didn’t want to present something that just felt like it was a tech demo,” Nathan says.

Creating a wholly immersive experience, to Nathan’s sensibilities, meant not creating a traditional VR work, which, though wholly consuming, is often an isolated experience due to the requisite hardware.

“You put on a VR headset and it’s an incredible, immersive experience, you’re right in there, it responds like a real world around you, but you’re doing it alone,” Nathan says.

“The one thing that we wanted to do is create something that meant you could create that together.

“Putting a fully surround, LED-based virtual environment around an audience, [which] is all running in real time… allows us then to have the interactivity of having sensors… to capture the body movements of people naturally, without them needing to do certain things or touch certain things or have certain sensors on them.

“I feel that that expression of those technologies is the least intrusive in how people can consume stories, and I would really like to see that same space be used for a thousand different stories after this.” 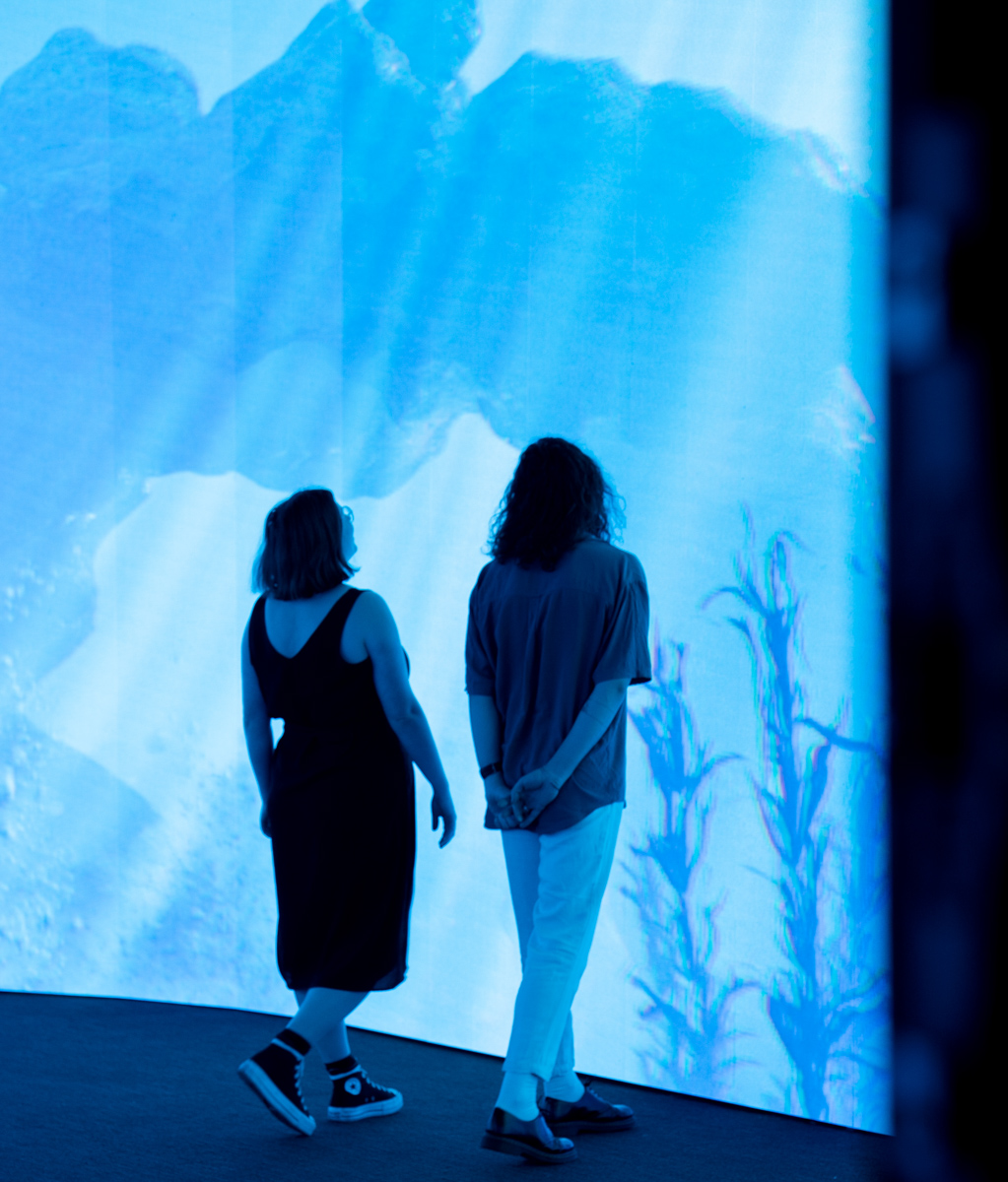 For Immersion, audiences will be placed inside a digital rainstorm, meet people made out of water, and will have fish follow them around the room.

The story of water that the work tells was informed by research as to what the South Australian landscape looked like 50 million years ago and includes Kaurna knowledge from Jack Buckskin, the project’s cultural advisor.

“Water is the one thing on this planet that really binds us together in every way,” Nathan says.

“Water molecules that are going through us and through lakes and rivers and falling out of the sky today are exactly the same molecules that arrived at this planet hundreds of millions of years ago, quite freakishly, as it turns out, on a cosmic scale.

“And so, the fact that we are seeing these same molecules travelling through animals and plants and trees and the sky and into the ground and through us, through all time, is this incredible bonding experience, I suppose, with every person that’s been on this planet beforehand, and everything that will come after.”

The script, which is narrated by Erik Thomson, was written to inspire in the audience a feeling of being “pleasantly insignificant”.

“It’s sounds like a juxtaposition,” Nathan says, “but I think when you hear about the immense amount of time that this substance has been on our planet, and we owe everything to it, and it is immense and it changes the way that the Earth even moves, and the gravity that it holds on the moon and things like that, that’s something that makes me feel insignificant, but pleasantly so.

“It’s this incredible substance that we owe a lot to.” 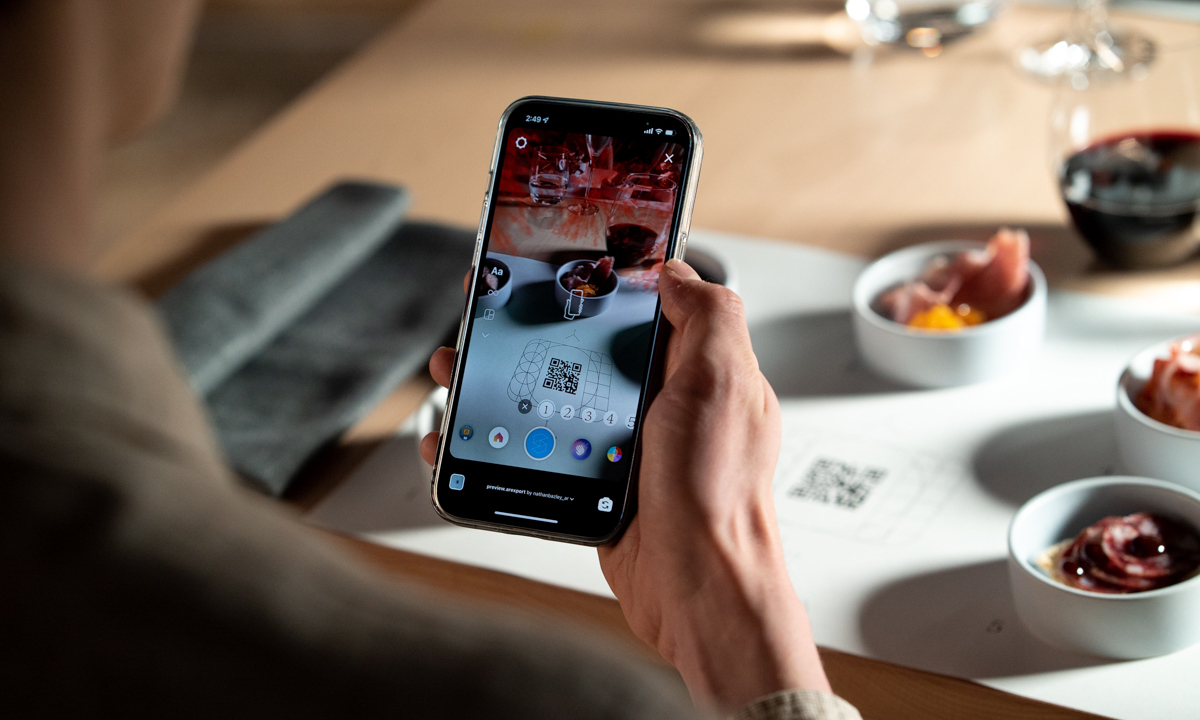 Immersion is running at Light ADL from 5—28 November as part of IMMERSE, a month-long event that includes not only the digital artwork, but associated happenings at The Lab, and five- and seven-course degustations available at Aurora, curated as a pairing to the experience.

We’ll meet at Beags outside Light for a complimentary beer, wine, or soft drink, hear a quick introduction from Nathan, and then be treated to the Immersion experience.

To register for the CityMag reader preview, email immerse@lightadl.com.au.

For more information on the month-long activation, see the IMMERSE website.