After leaving its previous studio and adopting a new name, the artists of XO Temple are ready for a fresh start at their new location in Kent Town. 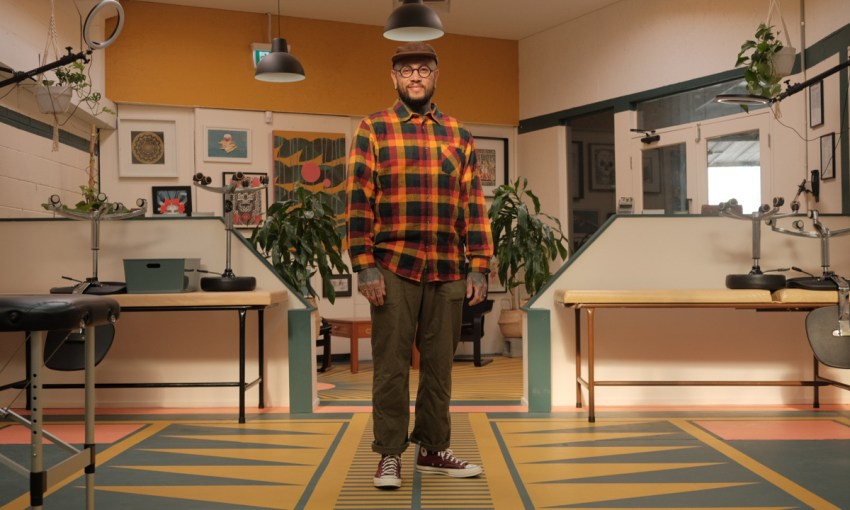 Since being founded by owner Jaya Suartika in 2015, XO L’Avant has become a hotspot for distinctive and non-traditional tattoos, with the studio being run out of arts organisation The Mill on Angas Street in the city.

Tattoos by appointment only.

Originally, it was only meant to be a temporary space. A little more than six years later, the studio is finally moving to a new spot in Kent Town – and adopting a new name, XO Temple.

Jaya, who was raised between Bali and Adelaide, started tattooing after growing up in the punk scene and practising tattooing on himself and his friends. He soon got a job at a street shop down south.

“I was a little punk kid that thought marking the body was rebellious and antiestablishment, initially, but now it’s evolved,” Jaya says.

When he started his own business, hiring local artists who did things differently was important to him, as well as giving the place a unique name.

“The ‘XO’ came from the term exoskeleton – because tattoos are kind of like an exoskeleton – and L’Avant [a French word meaning before, or forward] was because I wanted something progressive and different sounding, because a different kind of work was coming out of the space,” he says.

Through the process of opening a new shop, Jaya felt it was time to rethink the name of his business.

“The name change – I hadn’t really planned on doing it – but when I painted a big mural on the floor in the new space, I realised it kind of felt like a temple,” Jaya says.

“I felt like XO L’Avant wasn’t me anymore…I wanted to treat it as a rebirth, the shedding of a snakeskin.”

Finding a new place to move was a challenge, as landlords and insurance companies were put off by the stigma surrounding tattoo studios, particularly their possible connection to bikies and gangs. The move out of The Mill was initially planned for 2019, but the lease fell through.

“They just assume that everyone’s affiliated in a bikie gang, but every tattooist has to be vetted by SAPOL, and register as a tattooist… You can’t tattoo or be any way involved with tattooing if you’re affiliated [with a gang],” Jaya says.

“The stigma is changing, but maybe not so much within institutions. But we needed bigger space and things that aligned more with where we are at… Now it feels like a step in the evolution.”

Now in a bigger studio, there is plenty of room for guest artists, such as Melbourne artist Russell Winter, who’ll be in the studio from 28—29 April.

More than the size of his studio, the most important thing to Jaya is his clients, who he has built strong bonds with through shaping and tattooing their designs.

“When clients come to our studios, we break the expectations of what a typical studio would be like. We treat everyone like people,” he says.

“They aren’t just a canvas – as a lot of tattooists say – we are creating something special. I feel like I have a connection with everyone I work with, that’s maybe why I have a bit of a different presence in the tattooing world.”

“We’ll be showcasing a lot of what comes out of the Habit room, we just want to have more creative projects happening,” Jaya says.

“[It was important] to have a space that was more based on the creative side as opposed to just somewhere that’s a job. I like to think of it more as an artist’s studio rather than just a tattoo space.”

XO Temple is located at 20 The Parade West, Kent Town. You can get in touch with the team through their website or follow them on Instagram.