Hairdressers are the original small business, but a re-invention of the industry has brought a fresh approach to the art of cutting old protein off heads in Adelaide.

Slick Lobster rose from the ashes of Boys Club – one of the first in the new wave of Adelaide barbershops.

But while Slick Lobster owners Daniel Casey, John Day, and Ash Bridle all worked at the original Boys Club location in Adelaide Arcade, when they took over the lease on that space and started their own business they decided to make a crucial change – and open up the shop to women, too. 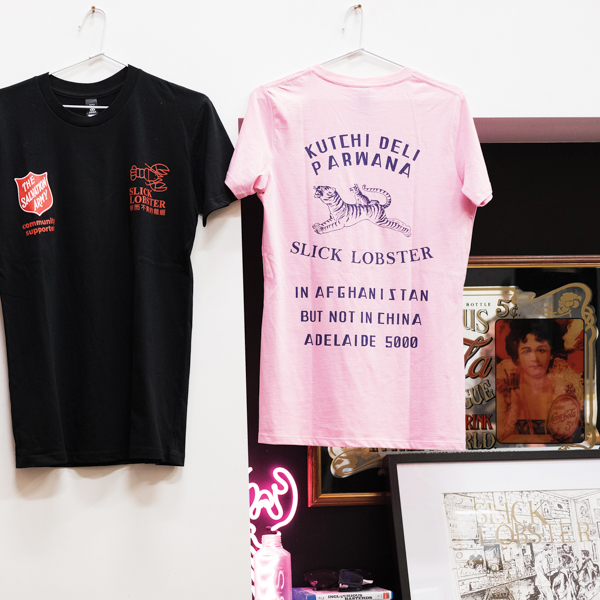 “That boys-only thing wasn’t part of what we loved at the shop,” says John. “We were into the relationships you make with people and just hanging out.

“We weren’t trying to make a massive political statement, we just thought – if a girl wants to come in and pay $35 to get a barber haircut, we have absolutely no problems taking their money and being equitable at the same time.”

While John, Ash, and Dan might not have been making a point of being inclusive, it’s the attitude of being welcoming and collaborative that has helped Slick Lobster achieve success in its first year of trade.

In that time they’ve taken on Georgie Sneyd to act as a third barber (John runs the business but doesn’t cut hair), and she says the willingness to share is what makes Slick Lobster different to a more traditional hairdresser businesses. 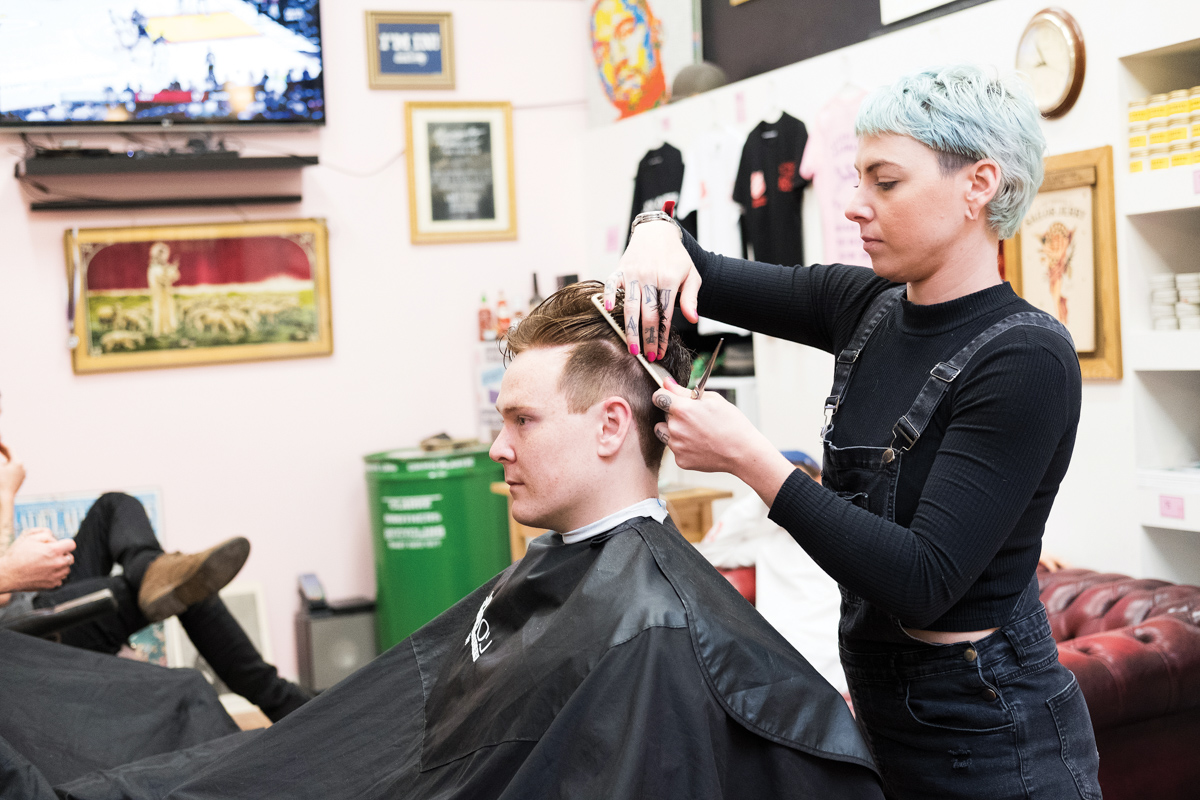 “The world in hair has always been really competitive,” she says. “I’ve never wanted it to be that way, I always just wanted to work with people and share knowledge and share skills, and working here has given me that opportunity.”

Welcoming Georgie into the fold has also made a difference for the boys, with her presence sparking a desire to open a second business. Chic Lobster – a full-service salon like those Georgie has worked in previously – opened in November, and is owned by Georgie and the three Slick Lobster guys.

While Chic Lobster offers a more complete level of service, it maintains the original shop’s interest in creating a culture outside of hair.

Both locations are places where people (in particular the staff from Larry & Ladd, who seem to have a symbiotic relationship with the Lobster team) hang out, and are ground zero for a vast array of output – including everything from in-house designed t-shirts to the Slick Lobster ‘Adelaide Alive’ podcast.

“The brand stuff, the t-shirts, the podcast stuff, it was more just like, how can we include all these interesting cool people that we’ve met and give it some kind of wider umbrella,” says John.

“Getting your hair cut in a barbershop is a very specific act, and it is not open to everyone, so we want to be able to include as many people as possible.”

And with that approach, giving people haircuts begins to feel a lot like helping to build a city and a community. 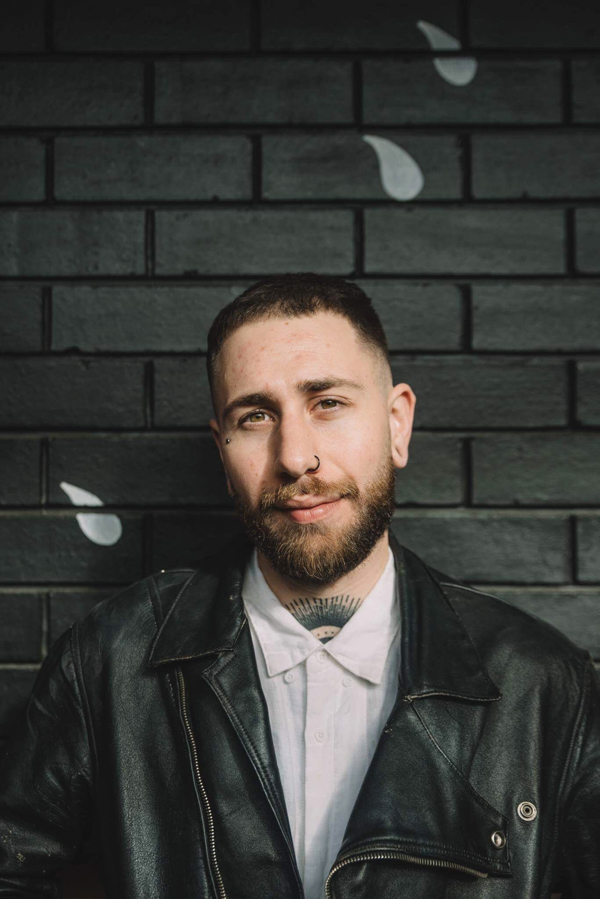 Located inside BRKLYN bar, Crooked Cutting Studio is a one-person operation run by Kieren Kuzyk – who says he started the business after he “noticed a large gap between male-only style barber shops that offer a more traditional barbering service and… the typical salon which consists predominantly of a female clientele and services”.

Crooked instead fills a niche between the two, with Kieren’s extensive salon experience being directed toward creating modern, shorter styles for both men and women in an environment that has some of the barbershop feel but offers a more thorough haircut. The studio’s unusual location is conducive to later opening hours of 3pm-10pm, and Kieren says being in the multi-disciplinary space “supports my contemporary style of work.” 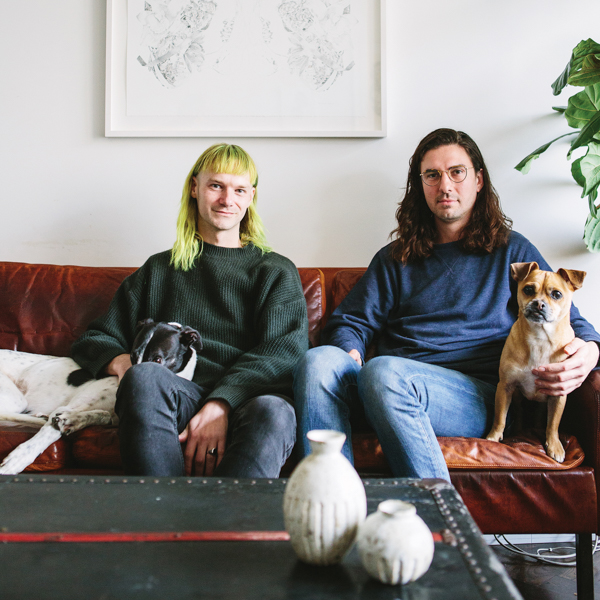 Adam Hadley-Darrie helped create a new standard for Adelaide salons when he opened DAS on Ebenezer place with co-founders Dom and Saffy Ossa. The attention to detail in décor and atmosphere created at DAS translates over into Archie & Co, which Adam opened with partner Paul Engelhardt a couple of years back.

Adam and Paul built on those good salon fundamentals by incorporating a café into Archie & Co, and slowly growing their team of stylists and baristas who – alongside producing consistently great haircuts and macchiatos – all seem to be really top-quality people.