The story of the floating house on Castle Street.

In a tiny space between Castle and Halifax Streets exists a home of unassumingly large proportions.

On a pocket of land just 9.7m x 12.2m, the newly built home, which was designed and built by Grieve Gillett Andersen, fits a surprisingly large floorspace of 120sqm.

Castle is a project by Grieve Gillett Andersen.

Once a hunk of metal that perhaps could have passed for a dilapidated shed, surrounded by some run-down state-owned heritage listed buildings that homed squatters for around 30 years, the place is a far cry from what it used to be.

Project architects, Dimitty Andersen and Dino Vrynios, say the build, which came about through a cold call from the client, is unique to the city and to the architecture firm.

“It’s a little house that’s sitting on a tiny block of land. But instead of a normal house, where the bulk is sitting on the lower level, and then making it smaller on top, we basically flipped it on its head,” says Dino.

“Having 3 bedrooms, 2 bathrooms, it’s essentially just a pretty normal house. But to get it into that size footprint but still providing off-street parking. That was one of the key considerations of all this.

“We had this idea of maximising the ground plane, making it feel as big as possible. Because we have such limited space, it makes sense to make the house feel like it’s using all of it. That was why we decided to put the bedrooms up into the upper level, and create that form,” he says.

“We have experimented with this idea on other city projects in the past” adds Dimitty.

It’s far from the average four walls and some holes for sun – it’s a dynamic building that can adapt to use the full footprint.

“It feels bigger because of the use of glass. And you can choose to have different levels of access to the environment at different times. Having the curtains open or not open changes the nature of the whole place. You could have the curtains closed, but the glass open, so it feels like you’re outside but you’re protected. Or you could go the whole hog and be completely exposed. At that point, the building is floating above you and the ground plane is just everywhere,” Dino says.

The clients had a level of confidence in doing something like this, and I think it’s a good sign for Adelaide. -Dino Vrynios 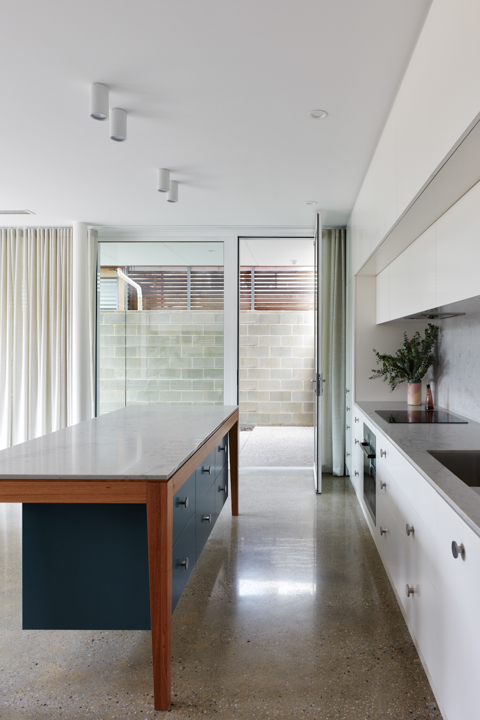 Ample space for living – the kitchen table is 3.5m long.

The project makes use of a piece of land that has long been overlooked, but in which the client saw untapped potential.

“Our client said ‘We’re looking at buying this property, could you please provide us with some advice?'” says Dino.

“The property… it’s made up of four different parcels of land. At the back… sandwiched between a State Heritage building and various carparks and rear gardens was Lot 581, which was, ultimately, where this project ended up sitting.

“The clients had a level of confidence in doing something like this, and I think it’s a good sign for Adelaide. The value in this land and the way that we might start to change, to live in the city as well.

“Because I would be on the hunt for a piece of land like this to buy and do something similar, and I think it demonstrates a different kind of approach to urban infill and density in the city.

“I guess it shows that things are on the up, that people are willing to invest a significant amount of money on this kind of opportunity. I think that’s a good sign. Because it’s not a typical response to what we might normally see in the city.”

But when you look back at the recent legacy of those particular pieces of land – dilapidation, to be polite – it makes sense why. 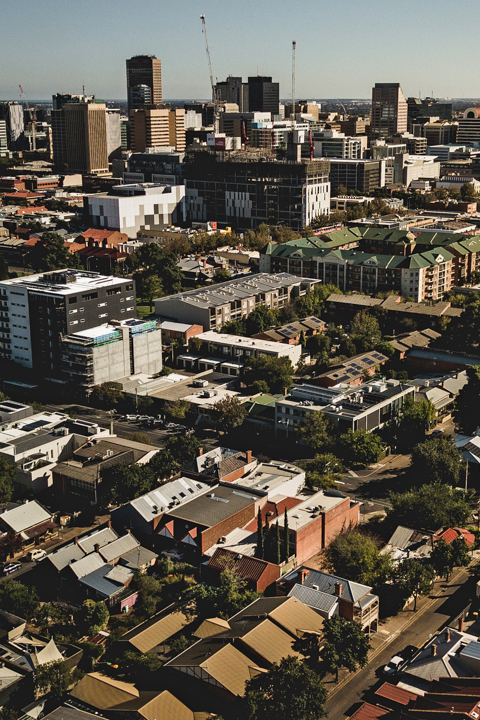 “The Adelaide CBD, once you get past Wakefield Street, it’s not really city, it’s not at all. Gilles Street is more like Parkside or Unley. It’s no different, really. But, the planning policy in the Adelaide CBD allows limits of density to be pushed a little harder and Castle is the product of that.”

There are a lot of elements that make the floating house on Castle Street special – but perhaps it is our city that makes it so.