The south-west corner of Adelaide, home to creatives and innovators, is evolving as ongoing developments revitalise the area to showcase its vibrant lifestyle. 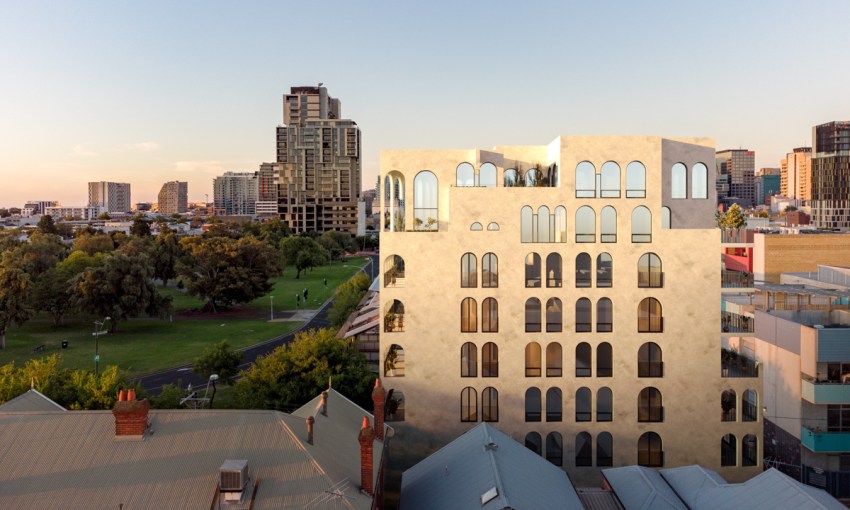 The rejuvenation of Adelaide’s south-west quarter is clear to see, as the activation of historic pubs, as well as cafes and restaurants, bring life to the area.

here are only five residences remaining at 58 Iparrityi.
Belle Property International, Adelaide is handling the listings and enquiries can be made at the website.

This article was produced in collaboration with Studio Simpatico.

Small businesses and creative professionals line the streets of the neighbourhood. For those new to the area, or already enveloped by it, it’s an exciting period of growth as the transformation continues.

The Whitmore Square/Iparrityi Perimeter Path and Greening Project is underway, which is the second stage of the City of Adelaide’s Whitmore Square Master Plan, involving planting large trees and garden beds along the edges of the square and building a new perimeter footpath to make the area greener and more pedestrian friendly.

Originally published in 2019, the master plan for Iparrityi Whitmore Square established a clear focus of improving the area by creating a green and friendly neighbourhood, including trees and gardens as key features, and integrating lighting for evening activity and aesthetics.

Among this revitalisation comes the newest addition to the square, the Studio Simpatico development, 58 Iparrityi.

Area Councillor Keiran Snape is an advocate for developing the western end of the CBD, and he believes developments like these are positive and should continued to match population growth.

“Residential developments are important, my hope and belief is that developments should be sympathetic to the surrounding area,” Keiran says.

“The south-west has a long history and it’s a wonderful part of the city… Bringing more people into the area and breathing more life into the area is always a good thing.” 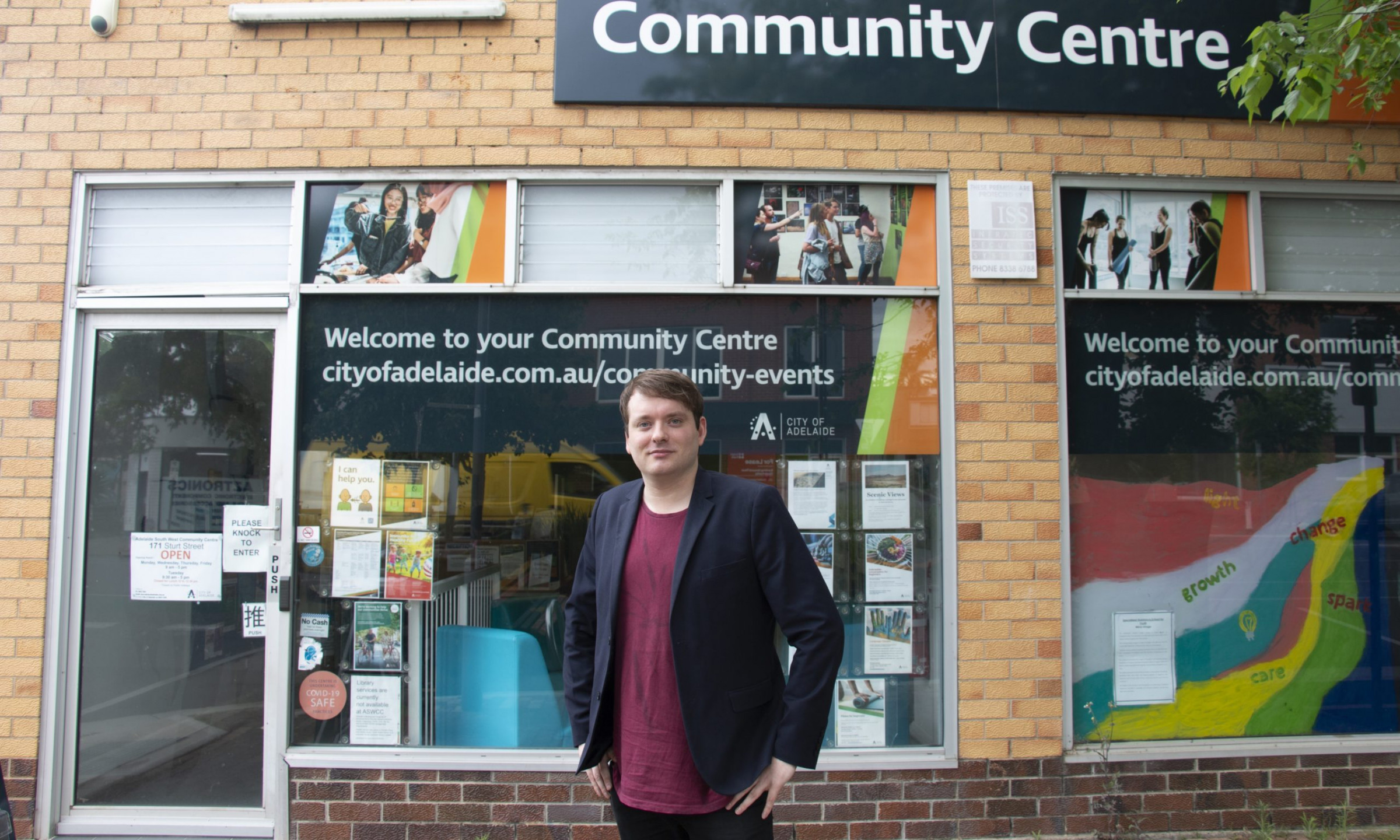 The property is designed by Enzo Caroscio and the architect says that residential developments play a big part in enlivening an area.

“City living activates the city outside of business hours and creates a residential community that adds energy and diversity to the area,” Enzo says.

“Making people proud of where and how they live is important to creating an identity and community.

“We have tried to achieve this in creating something very unique which will attract people who identify with the architecture, the city location and the existing community.”

The city’s master plan improvements are said to make the square cleaner, greener and safer for the community, cultivating an attractive and welcoming environment.

Enzo says the design for 58 Iparrityi echoes these values, with the building intended to add to the activation and interest of the square through its unique features.

“The architecture of 58 Iparrityi is very sculptural. The form is striking, through its solid form contrasting with the arched cut-outs and windows,” he says.

“The upper level of the building is also very playful, to create interest and a unique skyline profile. This, together with the shadows cast by the arch western face, should captivate visitors and those passing through Iparrityi Whitmore Square.” 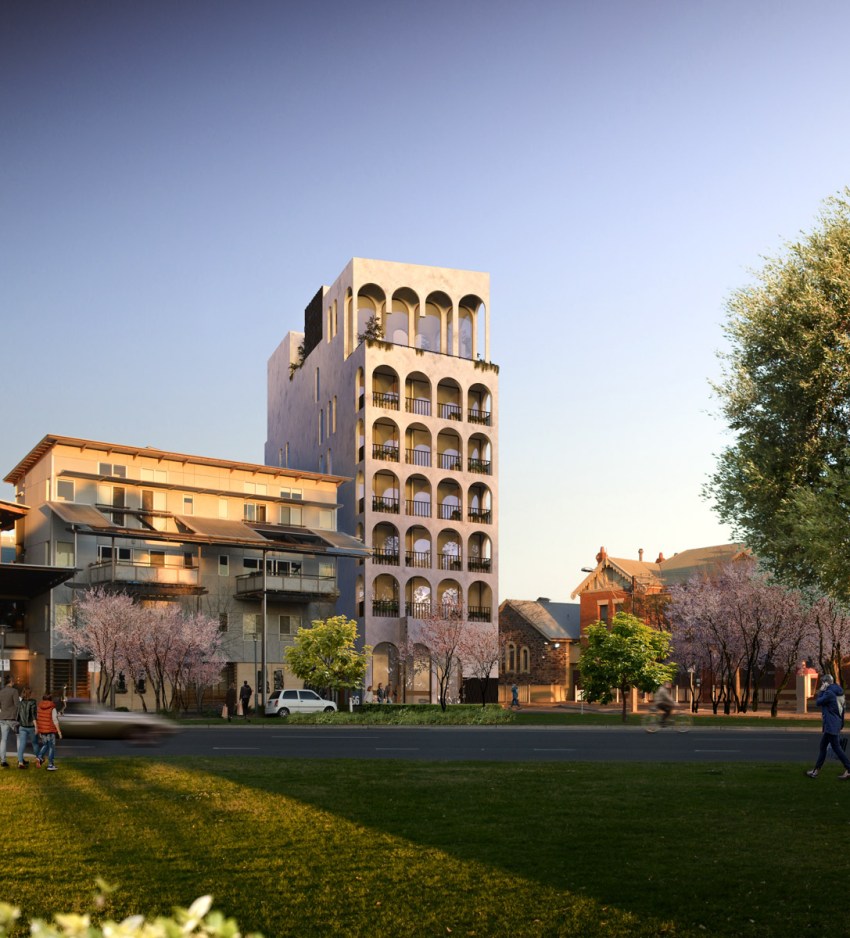 A render of the upcoming 58 Iparrityi project

The development has been conceptualised with the perks of the location’s greenery and proximity to the park lands in mind, understanding the value its surroundings offers to future residents.

“Providing contemporary and unique residential apartments in the city of Adelaide encourages owner-occupiers, as well as renters, to enjoy city living, with its easy access to all the city amenities, including the surrounding park lands, squares and bicycle network,” Enzo says.

“Large balcony terraces allow for occupants to furnish with large landscape pots, and views to the park lands and squares will encourage residents to connect and use the public open spaces.”

The proximity to the park lands is one of the reasons Studio Simpatico founder Melissa Pisanelli was drawn to the location.

“I have lived in Adelaide’s south west for 10 years and feel a real sense of community here. It is like a suburb in the city,” she says.

Melissa believes these neighbouring developments only add to the lifestyle this end of the Adelaide CBD provides, which has resulted in overwhelming interest in 58 Iparrityi from both older and younger demographics.

“Stage 2 of the Whitmore Square/Iparrityi rejuvenation is underway, as well as the rejuvenation of Moonta Place,” she says.

“The Central Market development will start soon – it is great to see Adelaide’s south west blossoming.”

58 Iparrityi will consist of residences with a minimum of 105 square metres, as well as three-bedroom sky home offerings with a customisable layout.

Each of six lobby floors will feature artwork from local artists interpreting the building’s design, the square or the local area’s heritage.

The property also includes a ground floor commercial tenancy projected to be a small bar or restaurant and designed to activate the street and square.

Construction on 58 Iparrityi begins in October 2021 and is due for completion in November 2022.