The bike and its charging stations will be made here in Adelaide.

Michelle Nazzari and Simon Modra met at a wedding several years ago in Sydney and spent the evening engrossed in conversation about motorbikes.

The pair of entrepreneurs stayed in touch as each went their separate ways, Simon back to Adelaide and various start-ups in the sustainability sector, and Michelle into her own electric vehicle company – Fonzarelli.

“I had been working in automotive manufacturing with electric and hybrid buses,” says Michelle. “That’s where it all started, but I looked at the powertrain and it’s very simple and thought, ‘Yeah, I might give this a go,’ and so set up the company and started tinkering.”

Michelle launched her first electric scooter in 2012-13 under the brand Fonzarelli and has grown the business from there.

Always with the push to increase mileage and with a dedication to motorcycles still in her heart, Michelle reconnected with Simon to tackle the issue of dedicated charging stations for her first ever electric motorbike – the NKD – which launched this morning at Pulteney Street’s Motorcycle Society.

Owner of Motorcycle Society, an architect and Future Submarine design researcher at the University of South Australia, Simon jumped at the chance to collaborate with Michelle on the NKD project and has since convinced Michelle to bring the manufacturing of both the charging stations and the NKD to South Australia.

“It’s a legitimate form of transport – there are many motorcyclists out there who don’t have a car and we’re lucky battery power has become so reliable now and Peter [Coombs – Chapter president of Design Institute of Australia] did give the hat-tip to Tesla. Now we’ve got this incredible range with the vehicle and we’re getting further and further out,” says Modra.

“The idea at the moment is to solidify ourselves here in Australia, but we’ve got strong interest from around the world,” says Michelle, building on Simon’s concept of range. 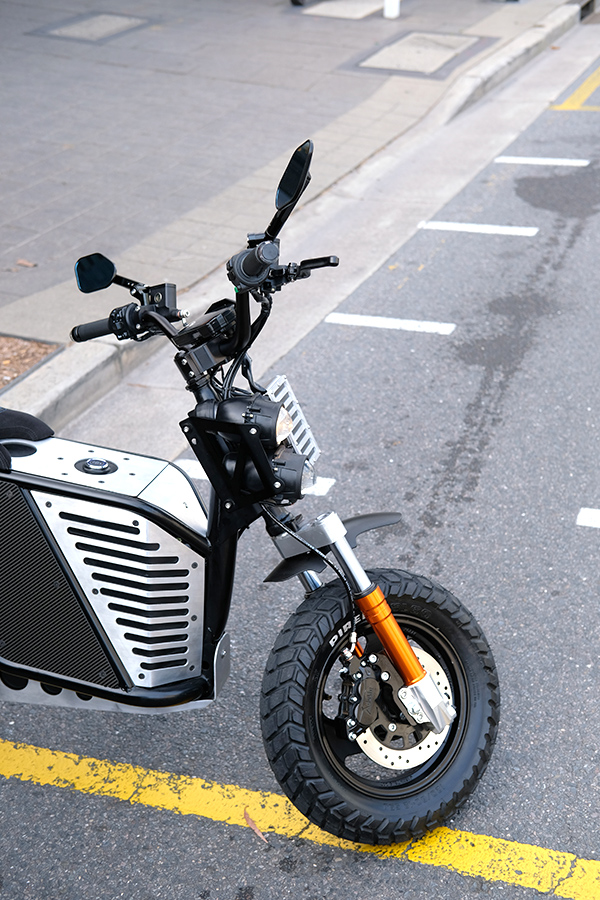 The incredible part of the Fonzarelli technology (other than being built in Adelaide) is that it is modular and can be retrofitted to older motorcycles too – potentially expanding the customer base for this product throughout high-use motorcycle populations in the countries across the Southern Hemisphere.

“It’s also got a bit of iRobot or Gattaca about it,” says Simon, “where they’re taking the traditional shape and clearly modernised it. I think the NKD is very futuristic looking and in Gattaca they actually retro-fit electric motors into their cars and that’s what I get excited about with the Fonzarelli – is that all that embodied energy in all the steel that’s on our roads now can actually stay there with a new powertrain. It is the future.”

There’s a sincere sense of optimism about both Simon and Michelle that is reassuring. The pair discuss a wide range of topics in our short interview that swing from consumption, to renewables and grapple with global expansion.

“All humans have the ability to change the way the planet works,” says Simon.

“I find with our Fonzarelli community – we’ve got a really tight-knit community – people are really buying into something bigger,” says Michelle. “Everyone can make an impact, it’s taking small steps and having that positive attitude.”

The Fonzarelli NKD bike is made to order. Base model pricing starts from $9,990AUD and early adopters will be able to have their bikes ready for summer.