Not another craft spirits label

For his first ever craft spirits project, designer Carlo Jensen of Peculiar Familia determinedly set out to create an identity that didn’t look anything like the brand of a small Australian distillery.

“I wanted to do something that was a little different in how it looked to what – I guess – has become the industry standard,” says designer Carlo Jensen of the brand identity he created for Never Never Distillery – a new South Australian venture.

Never Never Distillery’s gin is now pouring in several bars around town and around Australia, including Hains & Co, Sunny’s, and Mothervine.

“You know, everything is in those short squat bottles with, like, a wood stopper and generally a pretty minimal black and white label.”

“One of the hardest things about selling booze in Australia’s best bars – which is where I want this to be, is they have beautiful, fully-stocked back bars,” says Sean.

“We wanted something that is going to sit comfortably on the back bar, to have a presence in terms of the colours and the feel of it. The brand itself speaks to bartenders.”

Never Never will eventually make and sell gin and whisky. For now though, the whisky remains unseen, quietly ageing in barrels.

The gin, though, was released to market in August – and its small, slimline bottle is certainly a departure from the receptacles most often seen housing Australia’s crafty versions of mother’s ruin.

“I think one of the reasons most people end up with the same bottle is because the range to choose from here is pretty limiting,” says Carlo. “But we found this one through a French company after a lot of deliberation and searching.” 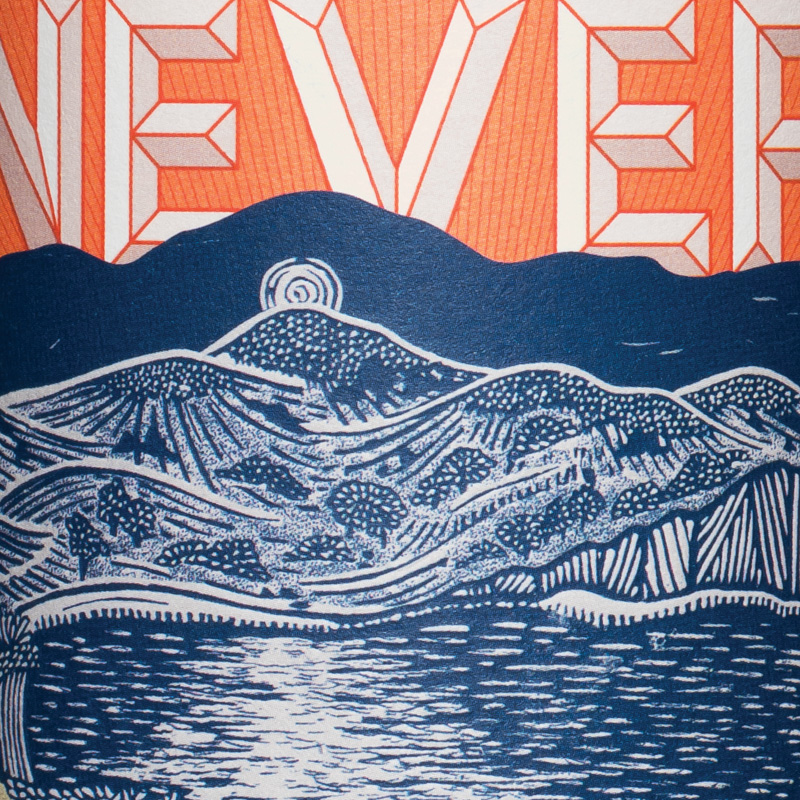 “We definitely didn’t want a bottle that people would walk past.”

“We definitely didn’t want a bottle that people would walk past,” says Sean. “And I feel like although there has been a lot of back and forth, we’ve really landed on something that does that.”

The heavily illustrative label on the bottle is also eye-catching.

Carlo commissioned Adelaide artist Kerri Wright to create an illustrative vista that depicts the country near McLaren Vale and surrounding coastlines – a location the Never Never trio hope will one day house their distillery.

“I wanted to just bring a bit more colour and a bit more detail and interest into the label,” Carlo says.

“So there’s some long-term thinking in what that illustration is depicting. That was the brief – to depict the rolling hills, the ocean, the Maslins cliff line.”

While the brand’s colours, are – of course – also designed to create visual interest, there were technical considerations that influenced Carlo’s choice to use a midnight blue as the base colour for Never Never’s identity suite.

That fundamental colour choice needed to work on labels for Never Never’s regular range of gins and whiskies, and also with a set of labels for their “Dark” series, which will feature more experimental products.

“The sticky point with the colour palette was there will eventually be another range of products and the way those products will be differentiated is by colour,” says Carlo. “So as a base colour we needed to pick something that would work in a wide range of variants.

“So there were definitely limitations in that respect, but in terms of the other colours representing anything, there was an aim to be a little bit earthy.”

With its swirl of sunset pink, Kerri’s evocatively drawn cliff faces, and sense of detail – Never Never’s gin bottle might not look like a familiar bottle of gin, but it does look like it’s from a familiar place.