Creating a new graphic identity for a cultural icon that lives and breathes online is a fraught undertaking, but Adelaide company Lightbulb Digital have ushered in a new era for one of our most hallowed institutions.

If you stare at the Adelaide Symphony Orchestra’s brand mark for more than five seconds (okay, maybe 10), you’ll see it not only features an illustration of a violin but a human head with ear inserted at the waist of the instrument.

The ASO’s logo does as much to define what the orchestra is about now as it has been and hopefully will be in the future.

“There are two kinds of cities,” Ben Folds (of Ben Folds Five) surmises, “those that have symphony orchestras and those that are crap.”

The symbiotic relationship between a great city and a great symphony may not be apparent to someone who hasn’t witnessed 70-odd humans playing in concert, but the joy of hearing unamplified timber, strings and brass sounding off in unison is what Ben Folds describes as the “highest form of civilisation”.

While CityMag agrees with Ben, we also reckon that statement sounds exclusive and snobbish.

So while the ASO’s yin-yang logo doesn’t need to update its appearance, if it’s going to have any hope of appealing to a broader audience than only the most refined and erudite, communication is key.

“When I joined the Symphony,” says Paola Niscioli, director of marketing and development for the ASO, “the website was the first thing I wanted to fix, but I knew it couldn’t be.”

Five years down the track, the ASO has a brand new website, and with it an entirely new way to experience Adelaide’s symphony orchestra.

“The idea was to create an experience before the experience of going to the Symphony,” says Morgan Martin-Skerm, founder of Lightbulb Digital and creative director of the ASO website project.

“It’s kind of an iceberg website in terms of what you see versus how it all works, but we’ve used really solid design practices to elevate the functionality for the user to the point where it mirrors the ASO’s own level of quality.”

Landing on the website, you’re immediately presented with animated visuals of the orchestra and upcoming events. The site is vibrant and the transitions between slides at the top of the site are luxe. On the bottom of your screen there’s an option to listen to the ASO while you browse. You can click ‘yes please’ or ‘not today.’ It’s a simple moment that cuts through to the user and has them considering before making a single click ‘commitment.’

“I think Lightbulb’s translation of our identity has actually brought about a warmth that perhaps is not there in our printed materials,” says Paola.

Translating a static visual identity into an interactive customer journey is no mean feat. Lightbulb Digital’s experience building sites such as BNKR – the giant online store for Australian Fashion Labels – enabled Lightbulb add another layer over the graphic identity of the ASO’s web presence, a commercial layer. 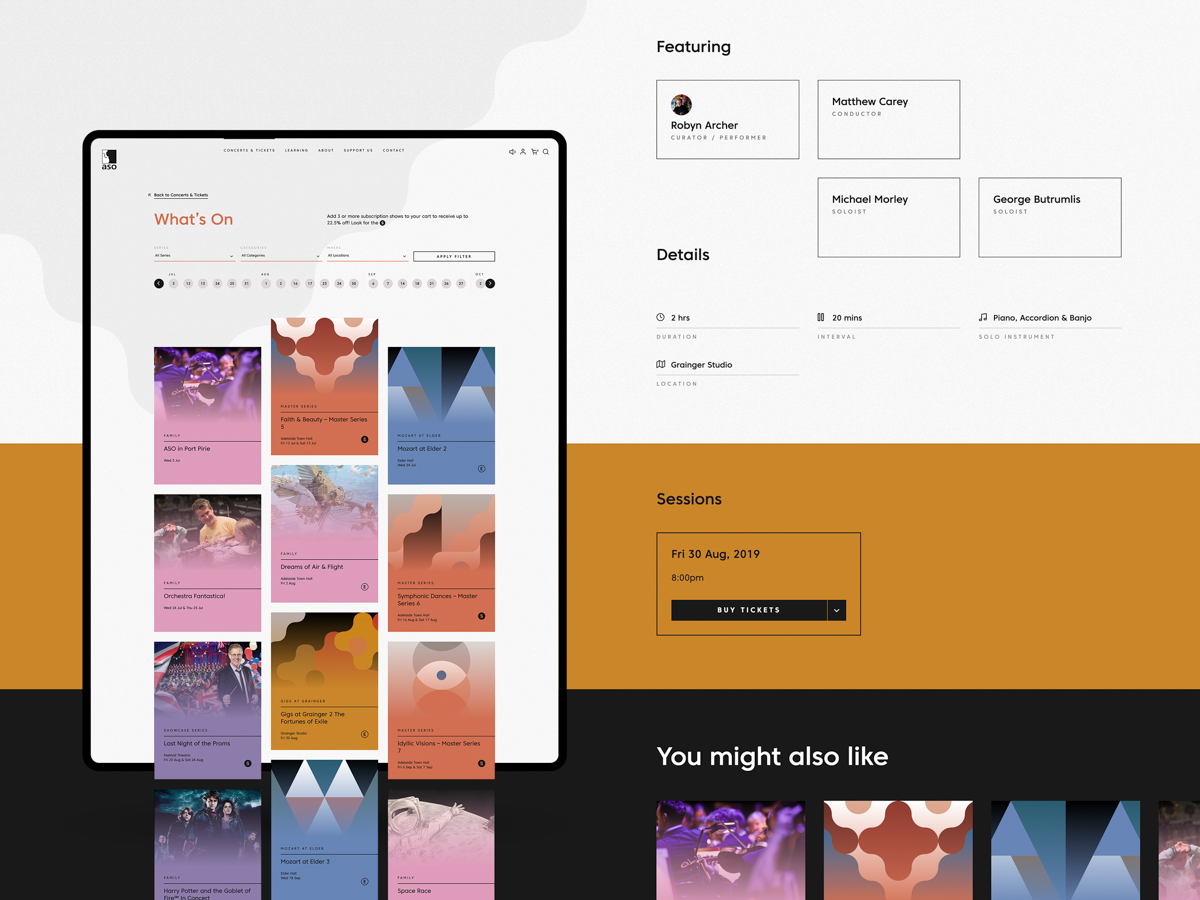 “I think that thinking around the retail space has really influenced the site to our betterment,” says Paola, “which is not the normal lens you put on an arts website, but I actually think it’s been an advantage.”

“You can still bring an element of pleasure to that,” adds Morgan. “It’s not just transactional.”

When we talk about graphic identities it’s easy to get stuck on the logo, the type treatments and the look. In the digital age, the identity is more than a look though.

“It’s different – in a sense – to traditional branding,” says Morgan, about creating a brand experience online. “Traditional branding has to have longevity but it doesn’t need to have the same degree of flexibility as a website.

“A great organisation like the ASO is going to move a lot in four or five years, and we have to make sure their website moves, grows and can reflect their brand values over that time.”