From Federation to Format

Owned by the Playford family since before Federation, the piece of property at 80 Hindley Street, Adelaide is being transformed into a home for art, experimentation and subculture as the Format Collective moves in. 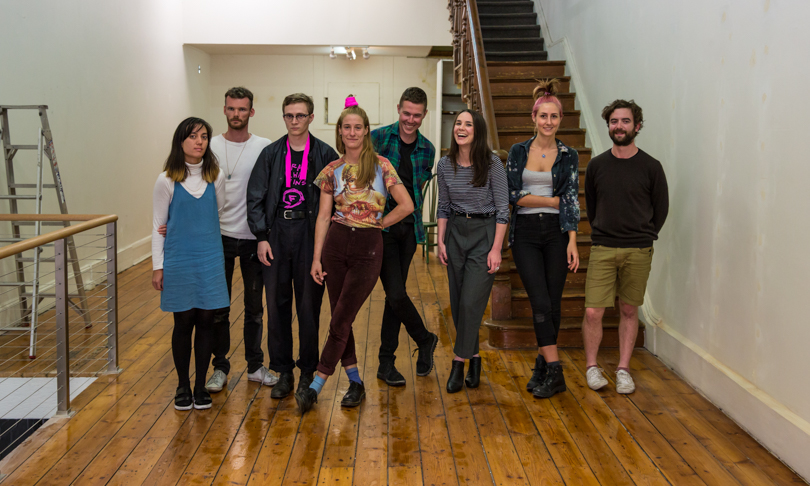 It’s been more than two years since Format were moved out of their former home on Peel Street to make way for redevelopment.

Since then, the Collective who provide a gathering point for subculture in Adelaide – offering space and audience for everything from zine making to performance art to exhibitions and live music – have been searching for a new venue to occupy.

It’s been a frustrating time full of properties that weren’t quite right, but the site at 80 Hindley Street appealed because of some rare features that suited Format’s needs.

“That means you can go to an event and you don’t necessarily have to be bombarded by the entertainment – you can go to the bar or hang out in the gallery for a while if you want to have a conversation. It gives people the freedom to make their own nice time instead of having it brought down on them as they passively absorb entertainment.”

“Also the location is sexy as – it’s right in the belly of the beast. Until we moved in, there wasn’t really a place for freaks to hang out in the centre of town, which is weird because Hindley Street is traditionally the home of strangeness in the city.”

The location is sexy as – it’s right in the belly of the beast. – Stan Mahoney

Evolving from the version of Format that was found on Peel Street, the collective has filled the Hindley Street property with a music rehearsal and performance space on the basement level, a café and retail shop on street level and a gallery upstairs.

Regular exhibition openings, gigs and events will punctuate the calendar, but the newly christened Format Systems venue will focus more on providing a home base for a culture than being a party destination.

“A place where inner city nerds can drink coffee and play handball will make a seismic difference to the West End,” says Stan.

“Format systems will be somewhere that artists can work and collaborate in preparation for performance and exhibition. Musicians and artists will pay well below commercial rates for the kind of resources that would be really hard to find in the CBD – that’s space, storage and 24-hour access to a rehearsal space.”

It’s a multi-faceted business model, and one that might attract a few raised eyebrows from potential landlords. But Andrew Tilley, who manages the building on behalf of his mother who owns it, says supporting groups like Format runs in the family.

“It appealed to us – we wanted to give them a go,” he says. “It’s not a bad model because they have the art gallery, they’ve got this sort of café-bar space and they could supplement each other.

“And they’re going to use downstairs. That appealed to me as much as anything – everyone else just wanted to use this ground floor and all the other parts were extraneous, but Format want to use the whole lot and they want to bring lots of people into the building, which is sort of the point.

“My family have always had a principle of letting our properties out to needy people. We’ve all inherited that ideal from our Great Great Grandfather.”

Andrew’s Great Great Grandfather was Thomas Playford – an ancestor of the SA Premier by the same name. He bought the block on Hindley Street in about 1835, soon after arriving in Australia on an early fleet and before going on to build nine churches in the metropolitan area.

The first building on the site was a boarding house and wine bar run by Thomas’ sister and her husband, while the current building has had former lives as a bookshop, furniture store and Egyptian Bazaar.

As one of the few pieces of property in the city that has remained in the same family since Federation, it’s a rare thing. And under the guidance of Format, it is set to become something even more extraordinary.