Everything that happened at this week’s Reconciliation Committee Meeting

From early signs of success at Puti on Kaurna Yerta to concerns about parking over burial grounds at the long-touted Aboriginal Arts and Culture Centre, a lot was covered at the most recent City of Adelaide Reconciliation Committee meeting.

On Wednesday, 1 December, the Reconciliation Committee – a 12-membered body aiming to advance reconciliation between Aboriginal and Torres Strait Islander People and the City of Adelaide – discussed a range of issues at Adelaide Town Hall.

Topics varied from whether the concept designs for the city’s soon-to-be-constructed Stolen Generations public artwork would impinge on “copyright issues”, to an announcement from Kaurna Yerta Aboriginal Corporation chair Uncle Jeffrey Newchurch on a massive repatriation effort in the city’s north.

Here’s a run-down on the important bits.

In October, InDaily revealed the State Government would immediately set up a temporary hub, complete with showers, toilets, tents and offices, in the southern Adelaide Park Lands to accommodate and provide support for remote Aboriginal communities sleeping rough.

The hub, titled Puti on Kaurna Yerta (or Bush in the City), has been operating for five weeks, offering campers on-site assistance with things such as health check-ups, drug and alcohol, domestic violence and Safer Families services, as well as hairdressing and laundry help.

“We are not going to provide any data today because we are going to bring that to council… next week, but we know that there’s been far more individuals recorded at Puti and in the hub than people had anticipated,” she said.

“We’ve had dozens of people return to Country at this point, with approximately 50 per cent of the people from the Northern Territory, and obviously COVID and vaccination rules are creating some complications there.”

On a slide titled ‘a snapshot after 37 days’, six bullet-points listed successes, including “many” vaccines being delivered at the hub, ID cards processed, and “large numbers” participating in Centrelink onsite appointments. It also reported “successful admissions” to withdrawal services at Glenside and the Aboriginal Sobriety Group.

Kaurna Elder and Reconciliation Committee member Uncle Jeffrey Newchurch says the camp “has been a new way of doing things” and he’s optimistic about its remaining two weeks of operation.

However, at the conclusion of the item, Reconciliation South Australia CEO Shona Reid expressed concern about “what happens once the weeks are over”, to which the Lord Mayor Sandy Verschoor said there is a hopeful intention to extend the hub. 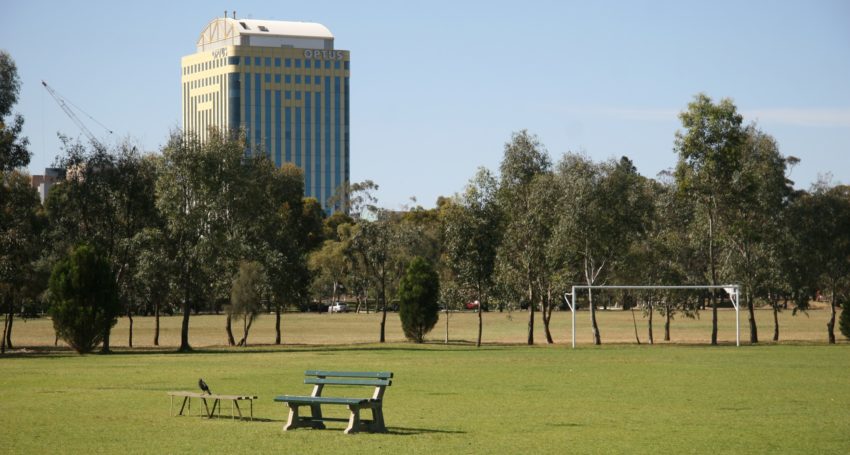 A southern pocket of the Adelaide Park Lands. This picture: Tony Lewis

A smoking ceremony for the long-touted $200m Aboriginal Art and Cultures Centre at Lot Fourteen has been set for 14 December 2021, marking the beginning of construction.

With this date fast approaching, the Aboriginal Stakeholder Engagement Lead of Lot Fourteen, Shouwn Oosting, provided an update to the Reconciliation Committee members on the art precinct’s progress, and how they, as the “First Nations voice”, could engage in the design and delivery of the centre.

Uncle Jeffrey said he “had problems” with the target of two per cent Aboriginal workers employed at the centre, which is touted to be “Australia’s premier Centre honouring more than 60,000 years of continuous First Nations cultures across the country”.

He said he wanted a higher percentage that would capture First Nations’ people living in South Australia, rather than workers living interstate.

“If we had a target of four per cent we may get Kaurna in,” he said. Oosting said they would take the suggestion on notice.

Nearing the final minutes of discussion, Kaurna Nation Cultural Heritage representative Lynette Crocker questioned where parking would be on the site.

“You’re going to be on Kaurna land,” she said, pointing out that the area around Lot Fourteen includes Kaurna burial sites. Again, Oosting said they’d “circle back”.

The Lord Mayor clarified there was a large parking lot at the back of Lot Fourteen and the centre was within walking distance from other parking lots in the East End. 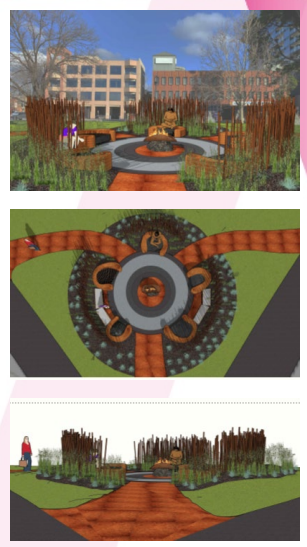 Concept designs for ‘A Place of Reflection’. This picture: City of Adelaide

By May next year, the corner of Murlawirrapurka Rymill Park will feature a new public art installation – A Place of Reflection.

The aim is to promote healing for members of the Stolen Generation, their families, friends and the wider community.

Prominent Ngarrindjeri weaver Yvonne Koolmatrie and Exhibition Studios managing director Karl Meyer will work in collaboration to produce the work, which will be a meeting place featuring a focal sculpture of a mother holding her arms as if cradling an absent infant.

Reconciliation SA CEO Shona Reid said “there are some really similar concepts” in the motif of the mother with no baby in their arms at other memorial sits, and enquired as to whether there had been consideration it was in breach of copyright “if it’s duplicated with such similarities”.

“It’s [a] very, very similar concept. I don’t know if that’s been sorted. I’m conscious it’s on my radar,” she said.

City of Adelaide Arts and Culture team leader Sarah Feijen responded saying they were mindful of copyright issues but would “absolutely investigate” and provide further advice.

Uncle Jeffrey was offered the opportunity to provide an update on KYAC activity, and said all Reconciliation Committee members should expect an invitation to world-first repatriation and reburial for First Nations people happening next week.

Read more about that story here, where the elder sat down exclusively with CityMag to discuss the project.