The Swiss-French connection at Haigh’s Chocolates

Haigh's Chocolates rose several places in InDaily's Top 100 Business Index this year, and continues to grow revenue and increase its retail footprint abroad thanks, in part, to a bit of Euro-vision behind the scenes.

Ben Kolly was born and grew up in the French-speaking part of Switzerland. However, talking to him now, on the Haigh’s Chocolates factory floor in Parkside, we’re not at all surprised to find him here.

Technical and Product Manager at Haigh’s, Ben oversees product development for the South Australian family-owned company. A pastry chef by trade, Ben’s career brought him to Australia initially to work for Nestlé and Lindt. But eventually he sent his CV to Haigh’s on the off chance they might have some product in need of developing.

“I met my boss, Peter Millard, and at that time the company was growing… and the company is still growing,” says Ben, pausing momentarily as if even he was surprised by the ongoing decade-long upward trajectory at the business.

Ben has just returned from judging cocoa beans in the Solomon Islands.

Ninety-six farmers were invited to submit their beans for feedback from the international panel of judges. The long list was reduced to just 10, from which the judges (drawn from chocolate factories around the world) then made chocolate bars for a final taste test.

Clearly working in what many might describe as a dream job, Ben does well not to smile too broadly about his work.

“Cocoa beans are quite fascinating. They grow 20 degrees either side of the equator only,” he says, “the Pacific regions – often the issue they have is the drying of beans after the harvest. The main crop comes over the rain season and so to dry the harvest they are placing the beans over wood fire and the huts get full of smoke, stuck under the roof and this impacts the flavour.” 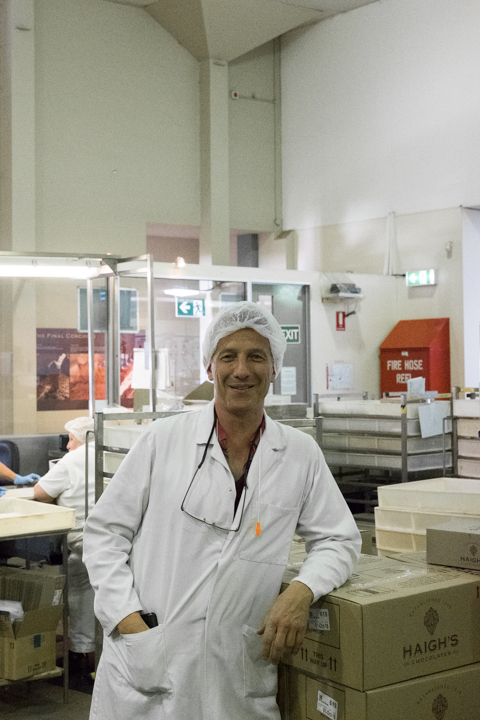 The trip to the Solomon Islands was part of an exchange, where chocolate makers from the United States, Australia and New Zealand could meet cocoa farmers and processors and give them insights into what qualities they are looking for when purchasing cocoa for their businesses.

“From growing, to harvesting, to fermenting, drying and then to us and all the work we do with the cocoa bean,” explains Ben – “every step is very important and if you neglect one or the other you don’t end up with what you like.”

Most of all – Ben is looking for a chubby cocoa bean pod. A nice, plump bean means it’s full of cocoa butter and this is really where the magic starts for Haigh’s.

Looking around the factory floor, there’s a fantastic density of humans. Each is dressed in immaculate white uniforms – like scientists – a single pair of hands helping this very special, raw commodity along from bean to bar with decorations, cellophane and custom packaging.

In the shop now and Ben is talking us through some of his creations. 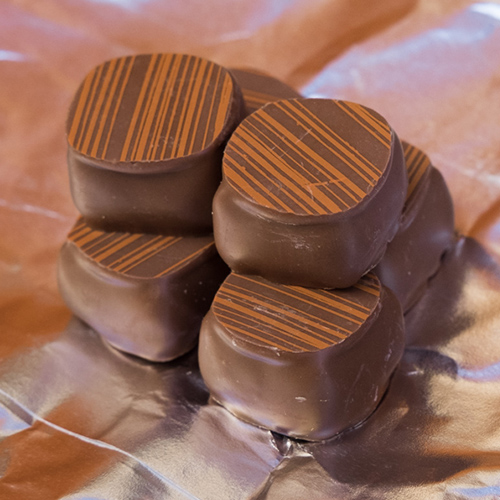 Salted Caramel Truffle – do try it!

He points out the salted caramel and tells us how the salt comes from the Murray River and so the decoration on the outside of this truffle takes its inspiration from the banks of the River Murray at Sunset. Another chocolate looks as though it’s gilded, a simple technique Ben explains away by showing me the glossy chocolate almonds and explaining the sparkle comes from the same coating.

While Holden closes its roller doors this week it’s good to take pause and reflect on the South Australian-owned businesses, which continue to grow and innovate. The government at both state and federal level speak of advanced manufacturing – we’d argue Haigh’s is right on the money, a specialist even.