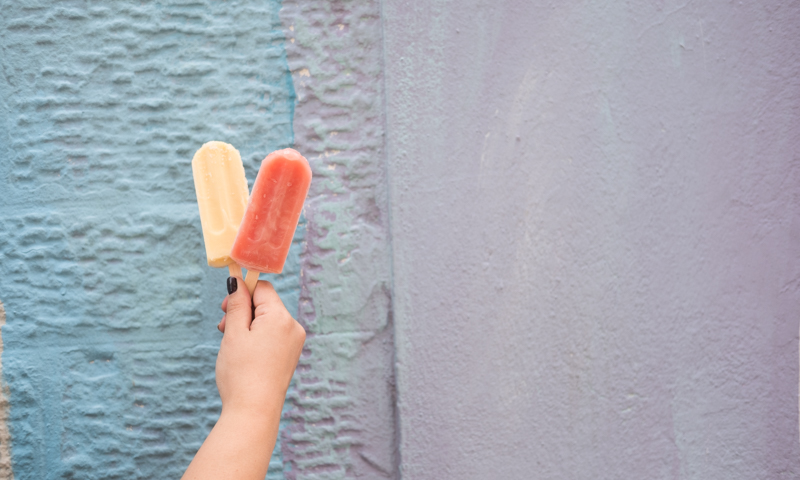 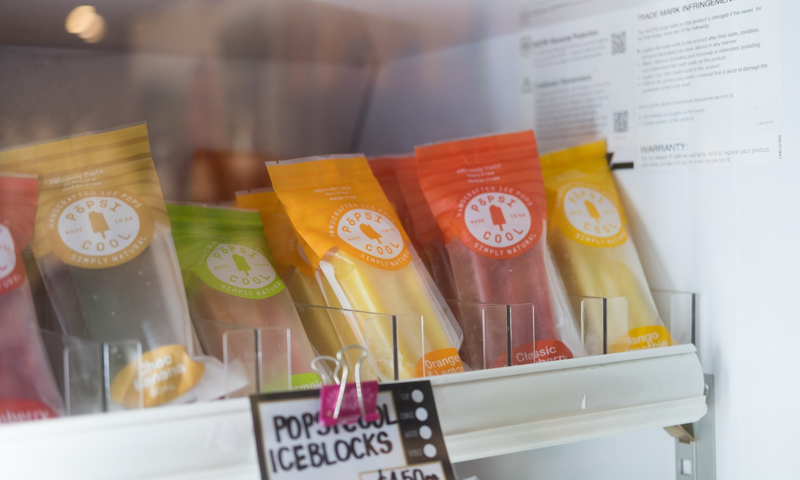 It was hot summer’s day in Henley when CityMag first encountered Popsicool iceblocks. After hours on the beach, we trudged up to Joe’s Kiosk for a Paddle Pop or maybe an Icy Pole. However, Joe’s Kiosk did not sell just any old iced treat.

Popsicool can be found at Joe’s Kiosk, Goodies & Grains, Tony & Mark’s, Beerenberg, and a whole bunch of other inward looking retailers across South Australia.

Joe’s Kiosk sold only Popsicool pops, and so begins this story.

Martin started the business in late 2014 after a trip to the US, where he stumbled across an already burgeoning artisan natural dessert industry.

“I’d been thinking about it for a couple of years. We went on a road trip across USA in mid 2012, and they were very into natural desserts. It’s huge, I think there are over 400 businesses just doing artisan iceblocks,” says Martin.

“We did this culinary bike tour in New Orleans, and the last stop was a vegan iceblock shop. They had all of these wacky flavour combinations and I thought ‘Wow, this is such a cool idea.’ I kept thinking about it.”

Eighteen months ago, he left his job to work on the business full-time – a move he could not ever have predicted for himself.

“I was a town planner at the time [in Adelaide], so I’ve sort of predominantly worked in local and state government for the last 10 years, and that was my background,” he says.

“If you’d asked me five years ago would I be in the food business, I would have said ‘What are you talking about?’ It was the furthest thing from my mind.”

What Martin saw in Adelaide was a growing demand for local products and a wide gap in a relatively untapped market.

“It’s a very small industry and it’s quite expensive. My focus is on supporting local farmers and the ones that are doing the best practice. You can’t do much better than that.”

But, Martin recognises the limits of locality. While he buys his strawberries from the Adelaide Hills, and his oranges, lemons, limes and stonefruit from the Riverland, he must look elsewhere for what he cannot find here.

“We do all those things where we can but we’re not total purists – it’s hard to run a business based on ideology. We get fruits from the East Coast where they’re available or have just got a bigger industry. Even our sugar is from Queensland – we found one that has an sustainable approach to environmental management,” says Martin.

Currently, the popsicles are sold in South Australia only, and to much success. Martin says the products are popular with parents looking for healthier treats.

Because he puts as much fruit in them as he can, and very little of anything else, the popsicles are predominantly vegan too.

Pictured here: the Mango Sorbet and the Watermelon Lime. Both CityMag approved flavours.

The business certainly has found its niche and, as Martin has discovered, when the demand is much higher than supply, it’s both a marker of success and a starting point for expansion.

“One of [my biggest challenges] is actually satisfying demand for the product. Starting a business with no background in business, I’m learning as I grow, making mistakes and learning from them,” he says.

“But, one thing I learned from my administrative background in town planning is the ability to collaborate and ask questions of people who have more experience than you. Don’t try and work it all out yourself. People are pretty generous generally and talk far and wide – those sort of things are worth their weight in gold.”

This also means reaching out to other successful businesses to understand their process, and hopefully see similar results.

“The US is at the forefront of a lot of food innovation, it’s been really useful to talk to some of them,” Martin says.

“I visited one a few years ago when he was where I am roughly now… and he’s grown ten-fold since I saw him. He’s doing an amazing job. We’re going to the US in May and I’ll fly down to Philadelphia and check out his operations. They do lots of minipops – they’re targeted at kids, and purely vegan. He’s making millions now, but when I saw him two years ago he’d just cracked 100,000. He’s really scaled up since then.”

Martin has already seen success of his own; since his first market stall at an Adelaide Night Market, the business has grown to a point where he now has multiple employees, is locking down major contracts, and has moved into a larger kitchen.

It might have been a leap of faith to start the business, and possibly the hardest thing he’s ever done, but, when you have great feedback and positive responses, “that’s the best thing ever,” he says.