Lauren Puvi graduated Fashion Design from TAFE SA in 2009. Eight years and two moves to Sydney later, she is back in Adelaide and launching her sleepwear label, Öösel.

Öösel will be sold exclusively online for now. Have a look here.

In those years away from home, Lauren learned a lot about business and her interests as a designer.

“I wanted to get some work experience. I interned at Willow and Madison Magazine, and I ended up interning with Elke Kramer jewellery. From there, I kind of developed an interest in jewellery,” says Lauren. 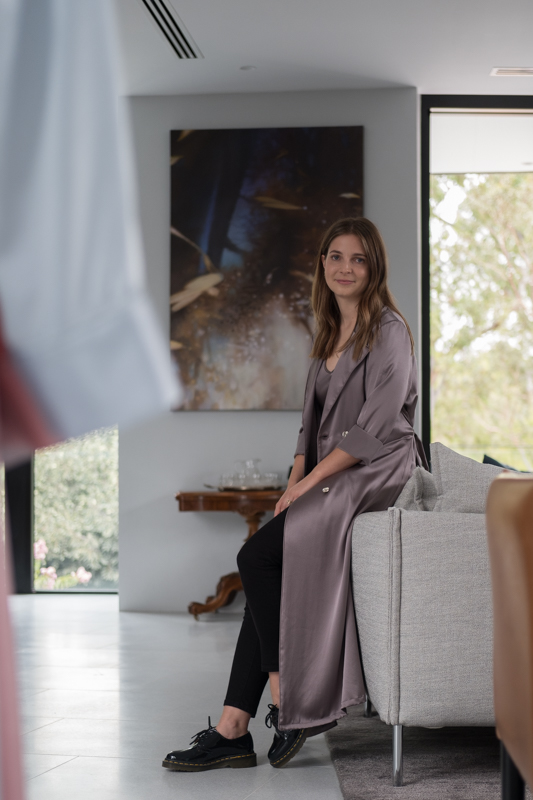 Designer, Lauren Puvi, in her home wearing a robe and cami of her own design.

“I came back to Adelaide, studied jewellery making at Adelaide College of the Arts and then went back to Sydney to work for Sarah & Sebastian the jewellery label, and I was there for three years.

“That was a really good experience, working with someone from a startup experience. They were a husband and wife, and I was their first employee. They grew to about 16 employees by the time I left.”

Her move back to Adelaide happened organically; after quitting her job to travel Europe, she returned home to visit family. Once here, she discovered Adelaide’s infamous pulling factor: affordable cost of living.

“Once I was back here, I realised if I went back to Sydney, realistically, financially, I’d get a full time job, all my money would go to rent, and [Öösel] would probably be put off for longer,” she explains.

Lauren planned to start her own label for years, but her move into sleepwear was a recent idea that trumped her initial evening-wear direction.

“There’s a gap in the market,” says Lauren. “There’s a lot of mass produced cheap cotton pieces, and there’s quite a few new silk sleepwear labels coming out in London, but they’re all priced around $600-800. They’re beautiful, but something that I personally would not be able to afford… and there’s just nothing in between.”

“Hopefully I’m designing for people like me that really appreciate good quality and well designed pieces, but can’t quite afford the uber expensive pieces.”

Beginning with a modest six styles in three colourways, Lauren says she wanted the first collection to start with just the basics: a short set, a long set, a dress and a robe.

“I knew I wanted to have the long classic set. I think there’s enough people doing the single button standard style, so I wanted to do something with a long-sleeve pyjama, but a bit different.”

The buttoned pieces are a point of difference in her range, double-breasted using abalone shell buttons, and the slip dress is a little different too.

“A lot of people are doing slip dresses, but I can never find the cut that I want. Mine’s got a little bit more length to it – it finishes around the ankle, which I really like. It’s flattering. It’s got movement in the body, which I really like,” Lauren says.

Lauren’s garments are made from Chinese silk, which she sources through an Australian supplier in Sydney, and then manufactured locally by a small business run by a husband and wife in Adelaide.

“I think they just do really beautiful quality stuff. It was really important that all of the seams are French seamed,” she says.

The business only exist online for its first year, while Lauren gets a feel for how to expand the business.

“I don’t need to mass produce and be available everywhere,” she says.

“I think it’s important for me to establish production and feel comfortable with the process before I go into wholesale… if you’ve got a big order and you don’t have the structure in place to be able to produce it, that’s when relationships go south, and the business goes south.”

It’s that sense of realism and clarity of direction that we admire in Lauren and, ultimately, why we believe Öösel is set on a path to success.

That, and those delicious pyjamas.