The liquid we didn't know we needed until we drank it – Good Time Brine is making all kinds of drinks taste weirdly delicious this summer. 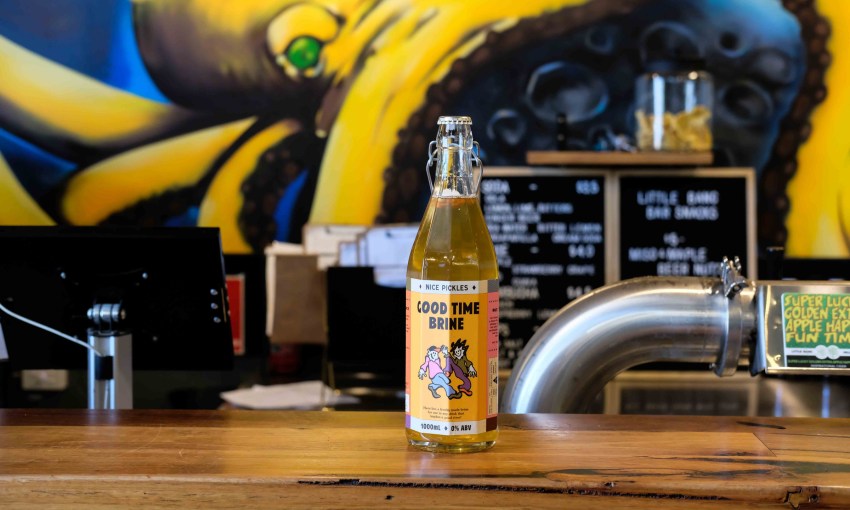 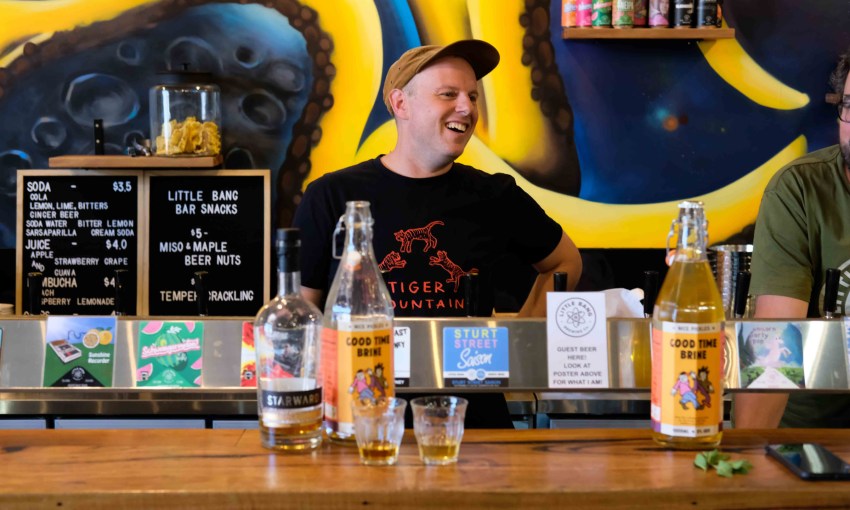 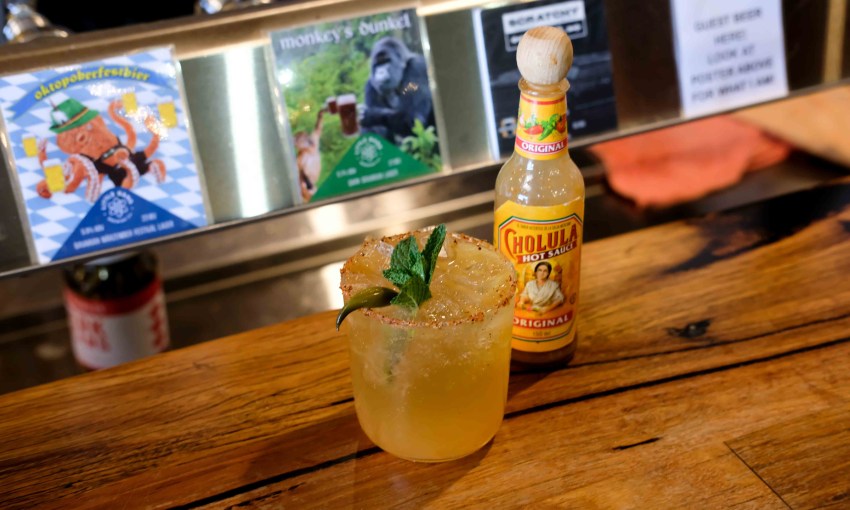 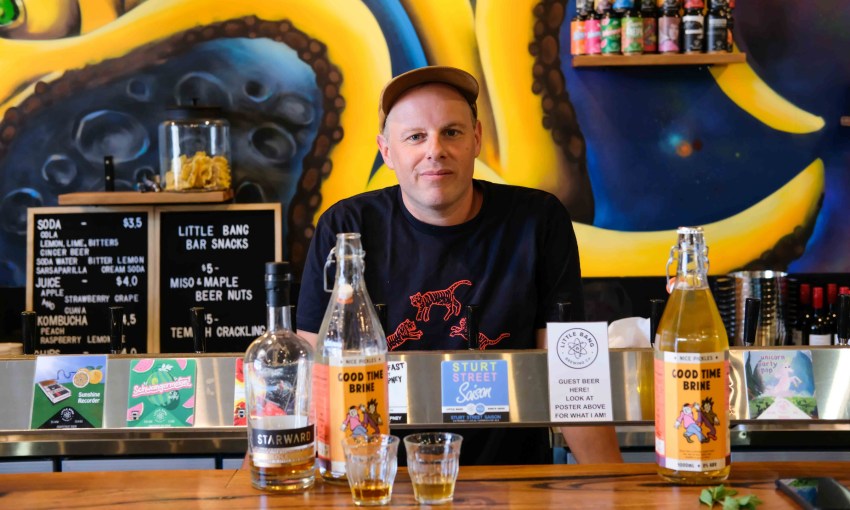 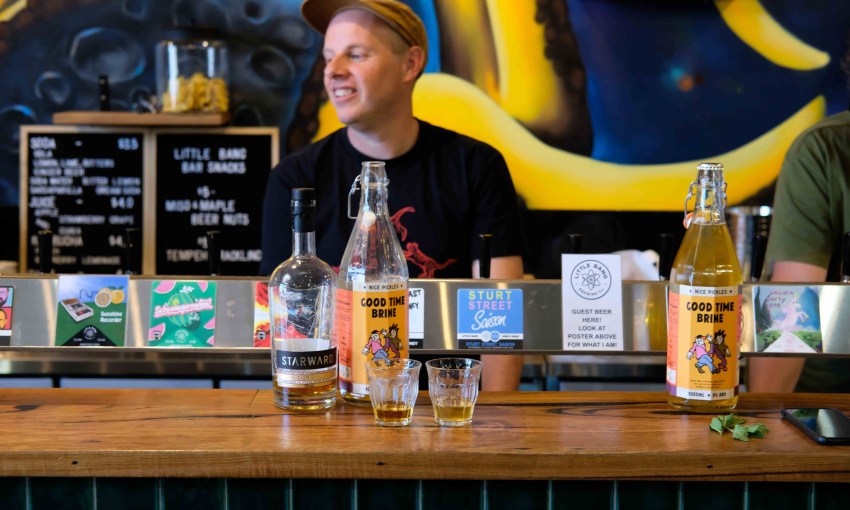 “It’s a michelada. I call it a pickleada,” says Robbie.

Whatever it is – it’s delicious. And while it tastes reminiscent of kombucha, it’s delicious in a way that kombucha never will be because it has booze in it.

Nice Pickles are stocked at Lucia’s Fine Foods in the Adelaide Central Market and you can try Good Time Brine with good brown spirit at either 1000 Island or Cry Baby as of next week.

Zingibeer is the alcoholic ginger beer by Little Bang Brewing. We’re at Little Bang’s brewpub in Stepney to catch up with Robbie of Nice Pickles, along with Ryan Davidson and Filip Kemp of Little Bang, to talk about the growing trend we’re seeing creep into city bars: beer-based cocktails.

“Beer cocktails have been around for a while,” starts Ryan.

“The Shandy is probably the oldest one, if you think about it,” finishes Fil.

While the beer cocktail trend is spreading across the city, the idea to mix beers over ice was really born out of necessity at Little Bang.

“Our old warehouse had really poor heating and cooling, so when it was hot in summer it was really hot in summer,” says Ryan. “That’s when we started doing things like our cider and hibiscus sour on ice. We were just looking for something you could put on ice that wouldn’t taste diluted. Beer on ice doesn’t work straight up, but if you blend some things in there and get some sweetness, you’re alright.”

Little Bang’s list of beer-related cocktails goes on though. 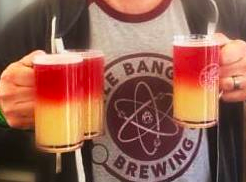 There’s the ‘Molly Ringwald’, which features The Pinkening, Little Bang cider, elderflower cordial, lime wedge, mint and ice; the ‘I’ll have what she’s having’, which Ryan mentioned above (and pictured here); the Wit-oska is full of fresh lime, peach kombucha, ice and Little Bang’s Witbeir; and finally, the Schwangermelon Mojito – Little Bang’s fresh-off-the-canning-line watermelon sour plus lime and mint on ice.

Robbie’s Michelada is on the menu too, rounding out the somewhat sweet list with a more tart and spicy beer cocktail that is dangerous for its moreish quality.

“We all made video games together,” says Ryan, explaining the connection between he, Fil and Robbie. “We’ve all done a few things in between,” adds Fil.

“We’re all refugees of the former Australian games industry,” says Ryan with a chuckle.

Robbie says that watching Fil and Ryan’s start up grow over the past decade was part of the inspiration for him to launch Nice Pickles, the company behind Good Time Brine and Jerk Beans.

Pickles and beer go well together, but Robbie says Good Time Brine was designed specifically as a chaser with a shot of American whiskey or bourbon. 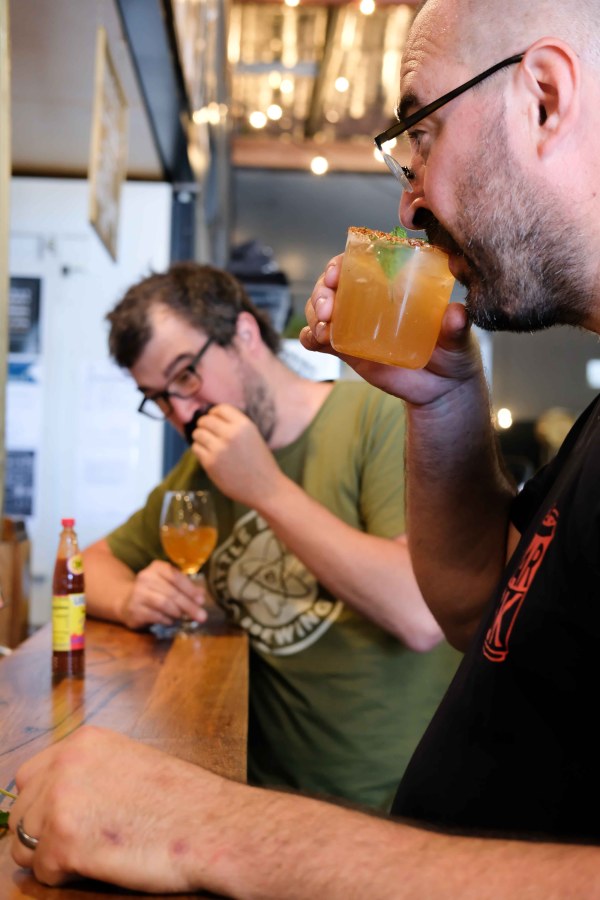 Fil slurps on a Michelada while Ryan bites into his swizzle stick at Little Bang Brewery in Stepney.

“I went to McDonalds and got ten cheeseburgers with triple pickles and just tried the pickles. I wanted to nail that flavour – that nostalgic burger pickle flavour,” says Robbie. “I’d had a few picklebacks at different bars and the brine was always sub par and let the whole experience down.”

“Liquid cheeseburger,” says Fil taking a big slurp of his Michelada before biting into the crunchy Jerk Bean swizzle stick in his glass.

Good Time Brine is booming, too. Robbie says he sold 100 bottles in the first week after launching the product and that dive bars around the country are ordering bottles in bulk.

But there’re other uses for Good Time Brine, says Robbie.

“It’s not all about booze,” he says. “We’ve had a huge response from people using it in health juices or as a hangover tonic.”

Talk about a versatile product. Gives you the hangover and then cures it the next day. No wonder Robbie called it Good Time Brine!