Growing beyond their prison yard taboo, stick-and-poke tattoos aren't what they used to be. 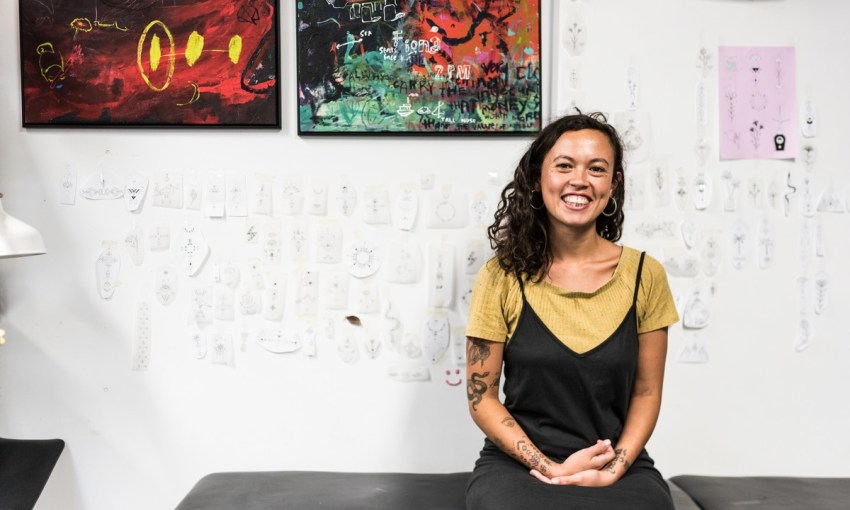 A friend’s mum recently told me that ‘people only get tattoos in times of trauma.’ I relay this to Nadia with a pinch of incredulity, but she nods her head. “Oh, a huge percentage,” she says.

“People will get a memorial tattoo, or [a tattoo honouring] this big thing they’ve overcome, or [when] they’ve had a big turn in their life. It’s not ‘trauma’ necessarily, but significant changes or events.” Nadia reckons this is particularly true of her clientele. People are drawn to her work’s ‘sentimental’ qualities.

Aimee Knight is a Writer in Residence at The Mill. This work was contributed through The Mill’s Writer in residence program.

Nadia Suartika – also known by her maker moniker ‘Nadika’ – is “an artist who developed tattooing skills,” as she puts it. This vastly undersells the intricacy and precision of her craft. Her elegant, hand-poked pieces are influenced by the Earth’s natural patterns, as observed on her travels through Africa, Asia and the Middle-East. Back at home in Adelaide, you’ll find her doing custom designs and flash pieces out of CBD studio XO L’Avant.

“I’ve always been good with my hands,” says Nadia, who also embroiders clothes and has produced earrings for Gorman. “I made jewellery as a kid… lots of crazy jewellery with beads,” she laughs. “I’ve always had a strong interest in adornments. Tattoos are that now.”

Despite your friend’s mum’s convictions, tattoos have but a whiff of taboo these days. Most recipients of long-term inking see the practise as akin to investing in jewellery or, more accurately, visual art – only you get to carry this personalised masterpiece with you everywhere you go. For Nadia, emotional investment is also central to the process.

“I draw rather than write about experiences. Designs for a lot of my tattoos come from diaries – emotional symbols, in that sense,” she says. “I’m a very emotional person.

“I like things done by hand… I like slow things, like embroidery. Even the aesthetic of doing things by hand appeals to me,” she says of her ‘stick-and-poke’ style. It’s a form of tattooing that doesn’t use a machine – just a needle of the required gauge fastened to a wooden handle. Last century, hand-poked tattoos were de rigueur in prison- (and school-) yards. Now they’re a mainstream favourite, admired for their fine lines, tiny dots and delicate shading. The ancient form has been honed around the world over millennia.

Across her practice, Nadia draws on “a strong tribal influence from certain countries, their pattern work, their cultural style. Textiles, in particular,” she says. Keen eyes will see this inspiration at play in Nadia’s own embroidery work, which celebrates her Balinese-European heritage, as well as ethnic adornment and ideas of femininity. “Also, plants,” she adds.

In 2016, Nadia landed a horticultural traineeship at the Adelaide Botanic Gardens. She had to give it up when she was diagnosed with a hernia. So she started tattooing full-time, seeding her passion for botanicals into her artistic practice. The result has been a honey-trap for young women and men who dig a gentler alternative to traditional tattoos.

“There’s a lot of suns and moons and plants, because that’s what people want,” says Nadia, describing her most popular motifs. “But the basis is a metaphor for something.

“Sometimes people have a really good idea of what they want: something that symbolises ‘freedom’, or a dedication. Sometimes people don’t have any [preference] at all, so I’ll try to pull it out of them.

“People will say, ‘I don’t really know what I want.’ I’ll ask lots of questions to squeeze it out of them. I know that deep down they do know, because they want to get something.

“Generally, I feel like there’s something behind it,” she says. “Humans like to attach meaning to things.”

Naturally inquisitive, Nadia is a self-described ‘chatterbox’. She’s also an active and present listener. Since getting even a small hand-poked tattoo can take several hours, Nadia uses that time to ‘go deep’ with her clients. “It’s a funny little exchange,” she says. “It’s quite therapeutic. Even people who use machines say that, but I feel like [hand-pokes] are even more therapeutic because it’s done by hand. It’s a different type of contact.

“I have this really nice time talking to people and connecting with them. They talk to me about their lives. I really like that aspect, even though it can be draining.

“Sometimes I think, ‘Why do you have to go so deep?’ but that’s also what’s good about it. A lot of my tattoos are about trying to find balance.”

When asked if gender plays a role in the emotional labour she performs, Nadia agrees. “Gender’s a thing, in a sense,” she says, noting how hairdressers – traditionally, a female-coded profession – often feel this intimacy with their clients, and vice versa. “I’ve tattooed quite a few guys, and sometimes they’re not nearly as open and ready to talk… I’ll pull it out of people more, that’s really a part of my process.”

Through tattooing, Nadia has learned volumes about human psychology. “You get to know how people are going to react to certain things,” she says. “It’s an interesting transfer of energy… I feel like I’m constantly learning.”

Originally pursuing horticulture was based on Nadia’s desire for a laborious job. “I wanted to live how I was supposed to as a human, using my body in a physical way… Now, tattooing, I sit down a lot under fluorescent lights,” she laughs. But the two pursuits still intertwine. Both are about growth, and how sensitive yet hardy natural organisms can be. She loves their intricacies and unique habits. By observing nature, Nadia learns what life needs to flourish. “That offers me symbolism for my drawings, and a metaphor to approaching life.”