Adelaide’s arts community let out a collective sigh of relief with the announcement this week of Patrice Sharkey and Louise Dunn as joint leaders of ACE Open – the contemporary and experimental art gallery and studio space in the west end of Adelaide.

It felt to CityMag as though everyone had been holding their breath since founding CEO, Liz Nowell announced her departure from the organisation to head up the Institute of Modern Art in Brisbane.

At ACE Open since February, Patrice is stepping up from her curator role in the organisation to become artistic director, and Louise Dunn is literally stepping up (and across) from the sunken courtyard of Nexus Arts, nestled between Lion Arts Factory and Mercury Cinema, to take up the role of executive director.

CityMag is lead upstairs and out the back of ACE Open to the laneway behind their building where a photoshoot is underway with the new directors of the still fledgling organisation. As each director is lead away for their ‘corporate head shot’ we get a chance to chat to the others about their feelings following taking over from a founder. 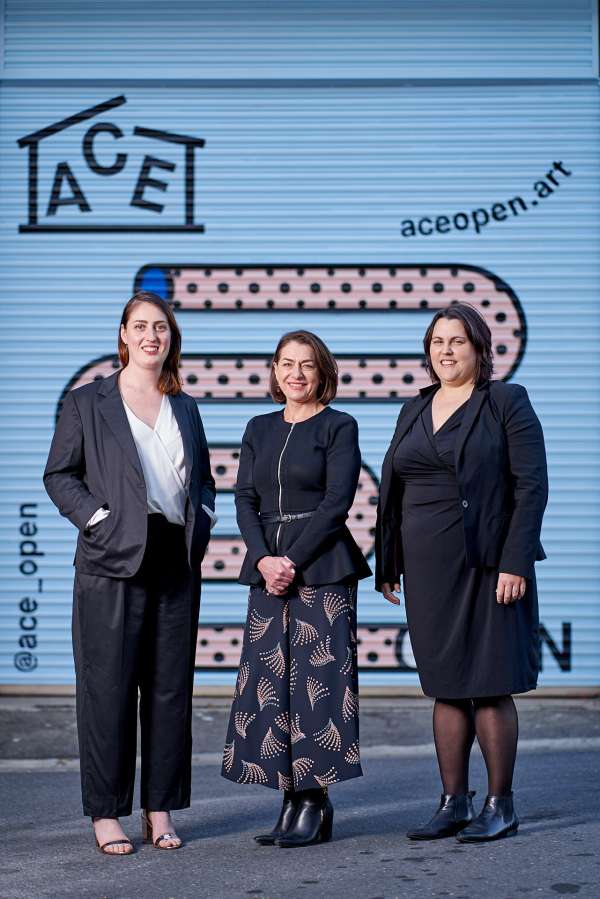 “I think that merger was expertly managed,” says Louise referring to the birth of ACE Open out of the demise of Contemporary Art Centre South Australia (CACSA) and the Experimental Art Foundation (EAF). “I was able to look on from afar, but this amazing organisation was birthed out of the merger of those two great organisations,” Louise says with perfect diplomacy.

ACE Open is on decidedly sturdier ground than where it was in the beginning. When it was founded in 2017 the organisation was patching together two de-funded organisations with no guarantee of any federal or state funding beyond 12 months.

Three years later and the organisation is about to be granted triennial funding, has raised $80,0000 by itself and has created a new revenue stream from the sale of an old asset.

An integral part of ACE Open’s ability to navigate these first few years has been the stewardship of the organisation’s chair, Kate Irving.

“Yes, I was very much involved in the restructure,” Kate tells CityMag. “It’s been really full on and we had a lot to do and we had to make some really significant decisions throughout the last two years, the main thing was dealing with the Porter Street property, which we’ve now sold and can use those funds to support artists ongoing,” says Kate.

CACSA was located and owned a property at Porter Street in Parkside for much of its existence, which has now been sold. Kate explains a little of the critical constitutional constraints governing the sale of that property that she and the ACE Open team had to negotiate but says the funds from the sale will help the organisation fund new art projects.

“Part of the funds that come out of it can be invested in an activity for artists that we wouldn’t normally be able to do,” says Kate.

Combined with ACE Open’s experimental public fundraising campaign this year to match and raise $80,000 from private and public sources for a significant survey of South Australian artists in 2020, this organisation epitomises the creative and entrepreneurial approach all art organisations must adopt in an era where government spending in the industry is rapidly decreasing.

ACE Open is in its third year of operation and has gone from strength to strength.

Its mission around diversity and access manifests in some of the most interesting local and international artists visiting and exhibiting with them, it places practicing South Australian artists in free studio spaces, but it also gives established artists new context to discover and explore realms of their practice they might never have otherwise.

“That’s what we want to keep going,” says Patrice, “is local arts communities and investment for South Australian artists as well.”