Members of the recently unveiled Adelaide City Shed say the space offers “a chance for fellowship with other like-minded individuals” while honing woodworking and social skills.

It’s a grey Monday morning on Franklin Street when CityMag approaches the entrance to Makerspace Adelaide, the home of the new Adelaide City Shed.

We approach a man named Wayne Owles, who’s holding a large slab of timber, and ask why he too has braved the chilly morning to visit the space.

He tells us he plans to turn the piece of wood into a table for his wife.

“Coming here gives me a chance to do woodwork I can’t do at home,” he says with a wry grin.

“But I like to come here because it’s a chance for fellowship with other like-minded individuals.

“I don’t have a date for when I’ll stop coming. I’m here for the long haul.”

Wayne is an early participant of the Adelaide City Shed. The project launched in early April and is built upon the same premise of Men’s Sheds, which are spaces designed to provide older Australian men with stronger community connections while teaching them new skills.

The concept is meant to counteract the effects of loneliness and isolation in older age. Suicide is one of the leading causes of death among Australian men, with older adults particularly vulnerable.

The Adelaide City Shed, however, also encourages women to pick up an axle saw and participate.

At the project’s opening, Lord Mayor Sandy Verschoor spoke of the inspiration to make the city’s community shed more broadly appealing, saying “A lot of women came to me and said ‘I was never allowed in the shed or to play with the tools or to experience that.'”

“A chap at the Burnside shed told me he wouldn’t be alive if it wasn’t for the shed.”
–Gordon Russel 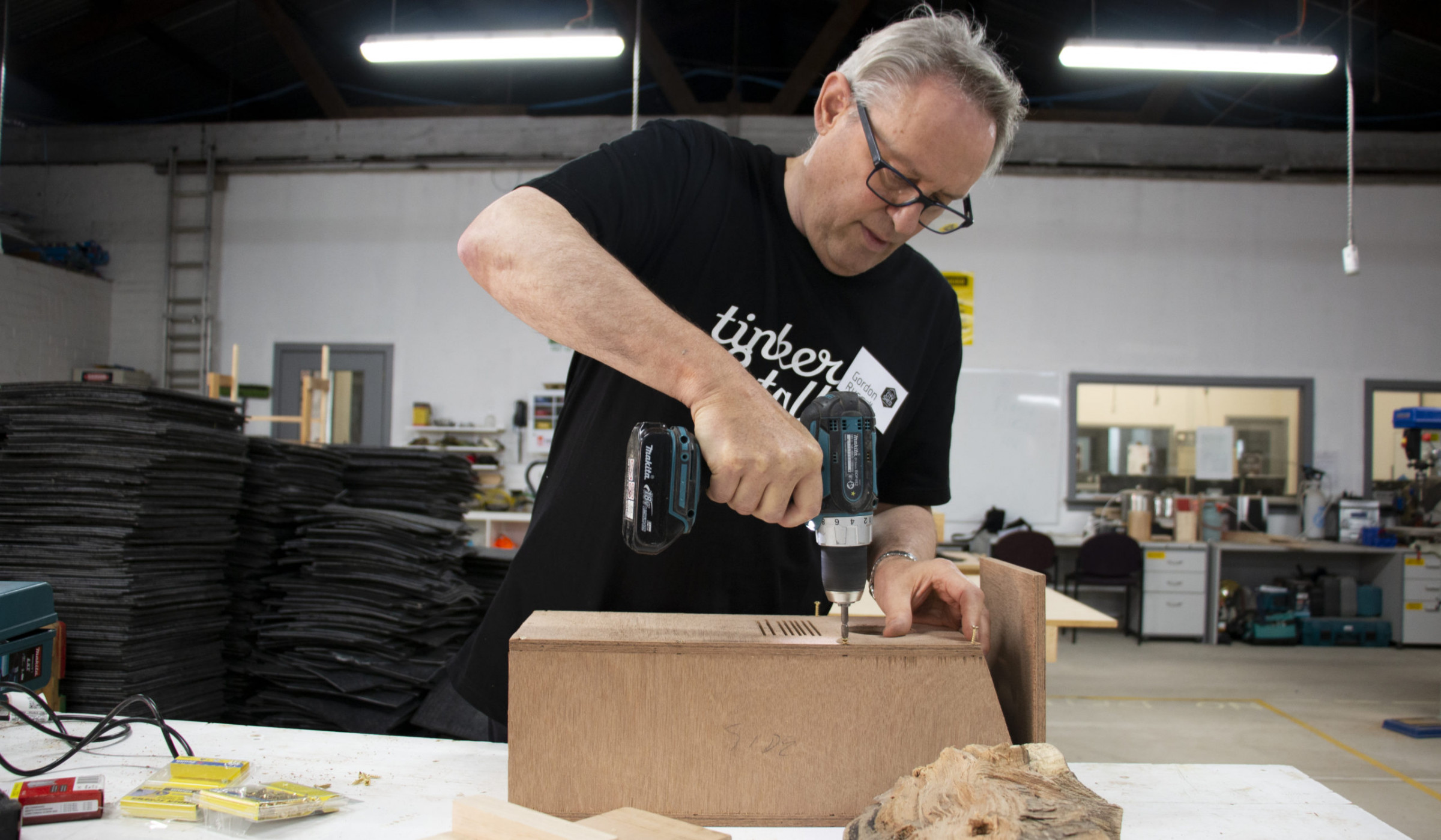 On the day we visit, the shed is full of sound.

Gordon Russel is the president of the Adelaide City Shed, and says it caters to all ages and genders.

Although the warehouse is stocked full of plywood and rows of machinery – materials and tools destined to construct chairs or cabinets – its most important function is building social connection.

“People underestimate the amount of trust and goodwill that it takes for society to work,” Gordon, a former Mitcham councillor, tells us.

“In a small way here, we can bring not only some care and support for each other but we can do that in the wider community.

“For example, there’s a community-run childcare centre that’s got some broken furniture or needs something made for the playground. We build it or repair it for them. It’s about knitting community together as much as possible.”

He has also seen the positive effects community sheds can have for participants.

“There was a chap at the Burnside shed, and he’d have been in his late 60s, early 70s, and he told me he wouldn’t be alive if it wasn’t for the shed,” he says.

Gordon took the role of president for the “personal satisfaction” he gets from supporting community welfare, as well as the gratification that comes with building something from scratch.

This is not a new feeling for Gordon, who is also the managing director of strata management company UnitCare Services.

While sawing into a piece of wood, he tells us it wasn’t uncommon back in the 1950s for a group of men to take turns building each others’ houses.

So taken was Gordon by this idea, he even built his own home.

“It came on the back of a truck, and I have just enormous self-confidence, so I just believed it’s a kit – I can do a kit. And I haven’t a clue.

“But houses are not hard to build. It’s not complicated.”

If someone should come into the Adelaide City Shed wanting tips on building a home (which now describes this journalist), Gordon says he would caution them to not be “too ambitious”, and “don’t underestimate the pain you’ll go through, either.”

We leave Gordon with a head full of self-built home ideas, and see another carpenter busying themselves over a mosaic structure. He introduces himself as Keith Herbig, a former woodworking teacher and a resident at Uniting Community’s U City retirement development.

Keith says he’s not here to brush up on his timber or hammering knowledge. For him it’s about making friends.

“I hope to socialise, or get a bit better at socialising,” Keith says.

“But today I’m going to make my partner a shoe-holder, because currently they’re on the floor. Not that I’ve ever made one before. But I can do some research.”