On a hilly patch of land across from The Scenic Hotel, Jay Marinis and Rose Lacoon Williamson are building a garden and horticultural therapy site they hope will improve mental health outcomes for South Australians. But first, they need your help.

To many people in the Adelaide hospitality community, Jay Marinis is a bright smile and a warm hello wherever you may encounter him.

He has built a hospo career that has seen him launch a wine label and distribution company, Son of Dot; he has run events, such as effervescent Ute Boot wine parties; and he is a co-founder of the much-loved Norton Summit pub, The Scenic Hotel.

In speaking with Jay about these projects as they’ve come to fruition, he often plays down any insinuation of difficulty in their production or execution. He will speak fervently, though, on each project’s purpose, and how it relates to his personal philosophies on hospitality, consumption or capitalism.

If he is to distribute wine, it will be from winemakers with whom he shares ideals in how wine should be farmed and fermented – living wines, as he calls them.

If he is to host wine events, they are going to showcase winemakers who fit the brief above, and there will be a component of education – something for attendees to take home that will leave a more lasting impression than a bottle of booze.

And if Jay is to be part of a team acquiring a pub, the venue is going to have a purposeful mission.

This is the reason CityMag meets Jay, and his business partner Rose Lacoon Williamson, at his pub on a brisk April morning – a new project called Top Soil Garden.

In addition to hospitality, Jay has built a career in psychology. He has worked in mental health for five years, and is currently a PhD student and works as a provisional psychologist with Hessel Group, where he has become intimately familiar with the National Disability Insurance Scheme.

At the time he took over the Scenic, Jay spoke cautiously (and off the record) about his plans to incorporate his work in mental health into the pub by creating a market garden across the road where he could design therapy programs in a horticultural environment for people undergoing mental health support programs.

This idea has been 10 years in thinking for Jay, informed by his experience working in the field, and has finally reached the public, with the launch of an initial Top Soil Garden crowdfunding campaign in early April.

“I’ve been working in mental health now for five years, and all of the environments in which I’ve been lucky enough to provide therapy to people have been these weird little clinical rooms, with maybe some K-mart toys for the children and a comfy but ugly seat for adults,” Jay says.

“Unless you’ve got an extra $100 above the Medicare rebate, it’s going to be a pretty dank place to go to. And even then, it’s, like, fake flowers.

“For me, set and setting is a huge part of any experience. Your mindset that you bring into the room is a huge outcome variable in what’s going to unravel for you, and it’s part of my job to help that person change their mindset. But if I’m given a horrible setting, which is not inspiring and is this clinical space, what are the chances we’re going to make some movement here?” 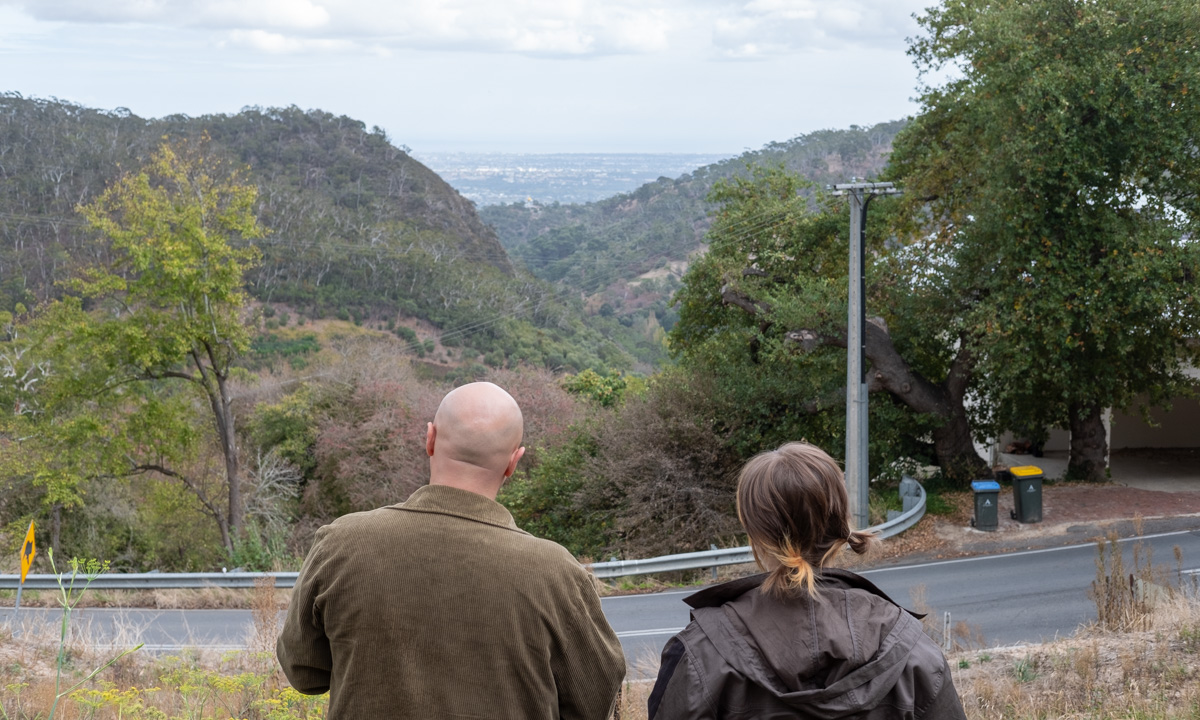 Jay and Rose surveying an Adelaide Hills set and setting

The Top Soil crowdfunding campaign aims to draw $46,000 to kickstart the project. The initial injection of funding will allow the terracing of the land adjacent to The Scenic Hotel, making its steep gradient safe for participants and mental health workers. It will also facilitate the construction of the site’s first greenhouse, and the hiring of garden manager.

Support workers and participants will garden during sessions, to facilitate connection.

“It’s about… engaging people in spaces that feel naturalistic to them – whether that’s at a table for you and me here, or standing in a garden together,” Jay explains. “And there’s lots of iterations to that – maybe we’re doing pottery in a studio that we’re hoping to build later down the track.”

At time of writing, the project is just $5000 shy of its $46,000 goal, with the campaign set to end on Sunday, 1 May. If the funding target is not met, the project will not receive any money.

Top Soil made 20 per cent of its budget in the first 24 hours, and so, on the day we meet, Jay and Rose are optimistic on meeting the target. (Though this was nine days out at the time.)

Should they be successful in their crowdfunding campaign, Rose says they expect to have participants in the garden by the end of the year.

At first, the Top Soil Garden will not have support workers of its own. Instead, “well-established participants and their… support workers, that are not ours, [will come] into the garden and experience it in a day-options program,” Jay explains.

“We’re offering a therapeutic framework, but we’re providing no therapy,” he says.

“It’s about testing what this looks like and doing it in a safe and iterative way, so that we’re not saying, ‘Well, this is how it’s gonna be’. There’s no way we can know that, because there are so few examples of this.”

“I think we’re trying to do something quite revolutionary in healthcare,” Rose adds, “in a very small, grassroots way, that we hope can act as a demonstration of how we can make healthcare more community-focussed and more human-centred.”

Through talking with NDIS support coordinators in his work, Jay has seen there is desire for spaces such as Top Soil.

“I’ve known lots of support coordinators, and they’re all like, ‘This is what people are looking for.’ And obviously I’ve asked participants along the way as well,” he says.

As the project develops, Rose and Jay hope to offer a range of services offered by their own team of healthcare professionals.

“We’re hoping to establish an allied-health hub where we can start to provide some psychological, occupational therapy, nursing, some other services, which will work in conjunction with the garden,” Rose says.

Though Jay admits the Top Soil concept is not proven (“Maybe all of our participants will hate the garden. Maybe this is not a good idea”), he says there is precedent to suggest therapy delivered in outdoor environments can positively impact participant outcomes.

“There’s a lot of occupational therapy research, because that’s all about body and range of movement, and your body in the space of your emotions, and understanding the full physiological effects of health and wellness,” Jay says.

“There’s not a huge amount of psychology research… There’s this new thing, walking therapy – people going out into nature and walking beside their participant, rather than staring at them – because some people can be quite heavily anxious, or survivors of PTSD can find it really difficult to connect one-on-one.

“We’re drawing on all of that, but mostly occupational therapy research, which says that being in nature, in a garden is very good to conduct therapy in.”

Importantly, Top Soil, when it reaches its ultimate form, will be just one option of many for support coordinators to choose from.

“We’re not suggesting that this is the be all and end all of how we should offer mental healthcare support, and support in Adelaide,” Rose says. “We are just saying there is not enough variety, and [that] doesn’t serve people.” 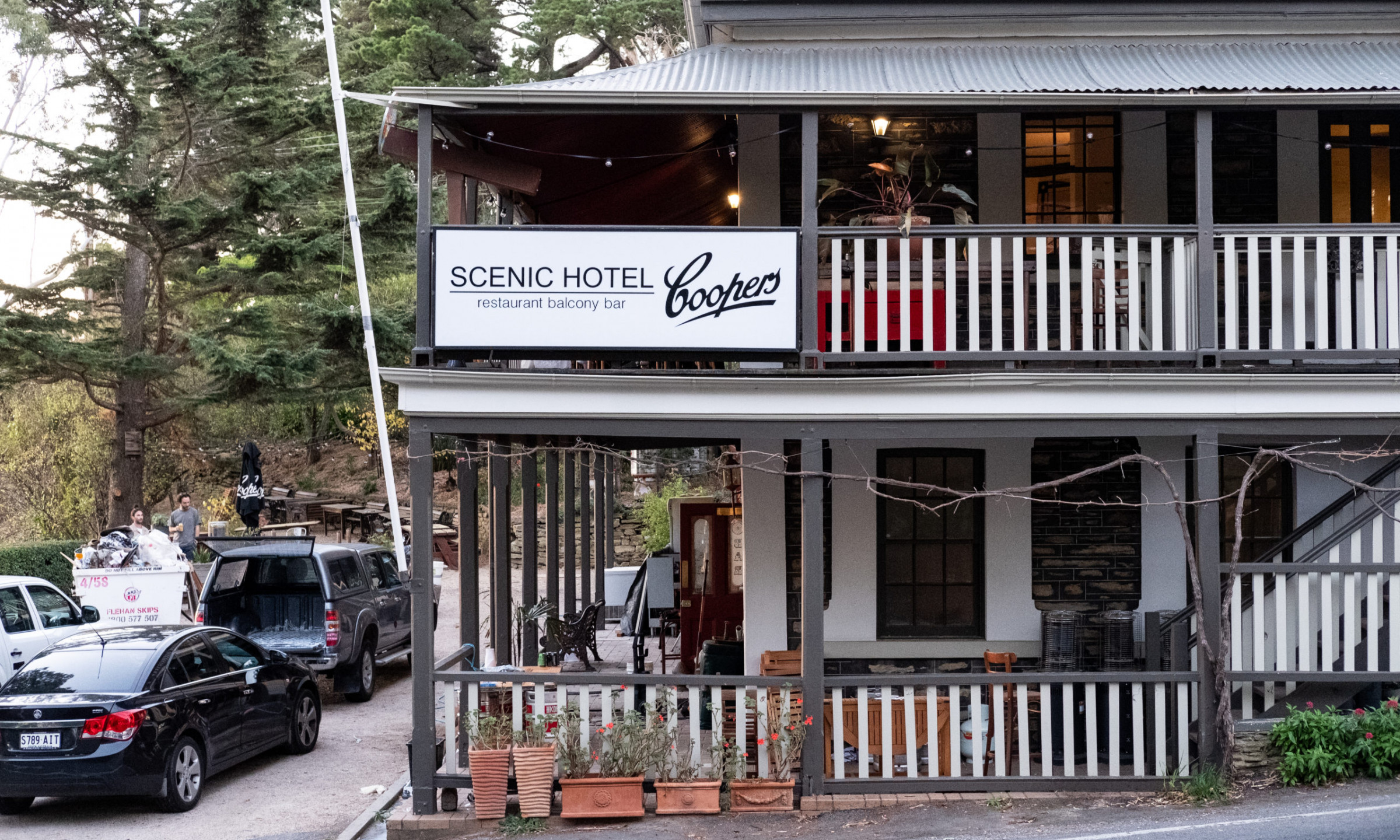 The Scenic Hotel in Norton Summit

The project has additional social aims, too.

The Top Soil Garden will grow food that will then be used in the pub. Jay hopes this will make the pub feel more accessible to therapy participants, some of whom might otherwise avoid hospitality spaces.

He also hopes to hold pay-what-you-can dinners at the Scenic, which will allow people on low incomes – such as those whose primary income is disability support payments – to dine there. Those who can afford to spend more can choose to pay above what they think a meal is worth in order to fund the continuation of the project.

“This othering that we do with anyone that has a diagnosable disorder, we’ve totally missed the boat and the option to learn from each other if we do that,” Jay says.

“So people don’t come to hospitality spaces anymore, they don’t get socialised with other people, and we also don’t understand them.

“It’s exactly what Scott Morrison has said – it’s like, ‘I’m blessed to not have this person in my life’. And he said it with the best of intention, right? But that’s the perspective of ableism. He doesn’t realise he’s doing it, because he’s never met them.

“How do we create meaningful diversity in our society that’s currently divorced from that?”

Top Soil is currently in its earliest stages, but Jay and Rose, who currently works at Youth Inc, have already compiled a small and dedicated team. The group is Lilly Stephens, who is a biodynamic gardener; Laura Grace, who is a mental health nurse; and Enoch Yates, a hospitality professional who has come on as project manager.

The future of the project, though, depends on convincing the broader community the idea has legs, which, for Jay, is a vulnerable position to be in.

“This is an idea that I’ve been sitting on for a very long time, and I’ve built it over that time, it’s not like it’s been one stagnant thing, but it has been really exposing,” Jay says.

“We have had some people come back and question us and be like, ‘But what about this’, and I think those questions have been so well received. At first it was very scary, but it’s helped us to explore our intention as well, and those people have come back now and they’re very on side.