Totalling 760 hectares of green space, the 29 parks and six city squares that comprise Adelaide’s park lands are considered to be our city’s greatest asset. But free and equal access into the city’s green belt is not guaranteed to all.

For 35 years, a fleet of vans have scoured Adelaide’s outer edges and park lands in the dead of night, blasting their headlights and searching for people who’ve had too much to drink and need help.

This service – running 365 days of the year – is called the Mobile Assistance Patrol (MAP) and is operated by a not-for-profit organisation called the Aboriginal Sobriety Group.

MAP’s aim is to help those in the inner-city get home safe, and “prevent deaths in custody and lock-up”, says Ngarrindjeri man and MAP’s acting manager Barry Rigney.

MAP’s drivers maintain direct lines of communication with the city’s police stations, and can provide back-up for non-serious issues.

Barry has been acting manager of MAP for two years and has been with the organisation for seven. He finds the work fulfilling because he too has lived “a hard life that’s more or less the same circles the clients are in”.

Barry estimates roughly 90 per cent of the people MAP gets home safe or into a sobering-up unit are from the Northern Territory and Aṉangu Pitjantjatjara Yankunytjatjara Lands in the state’s north.

When the State Government enforced 24-hour dry zones across the city in 2001, Barry says the community that usually gathered in Tarntanyangga Victoria Square moved elsewhere in the city. The move didn’t discourage people from drinking. It just led to them searching for another base. 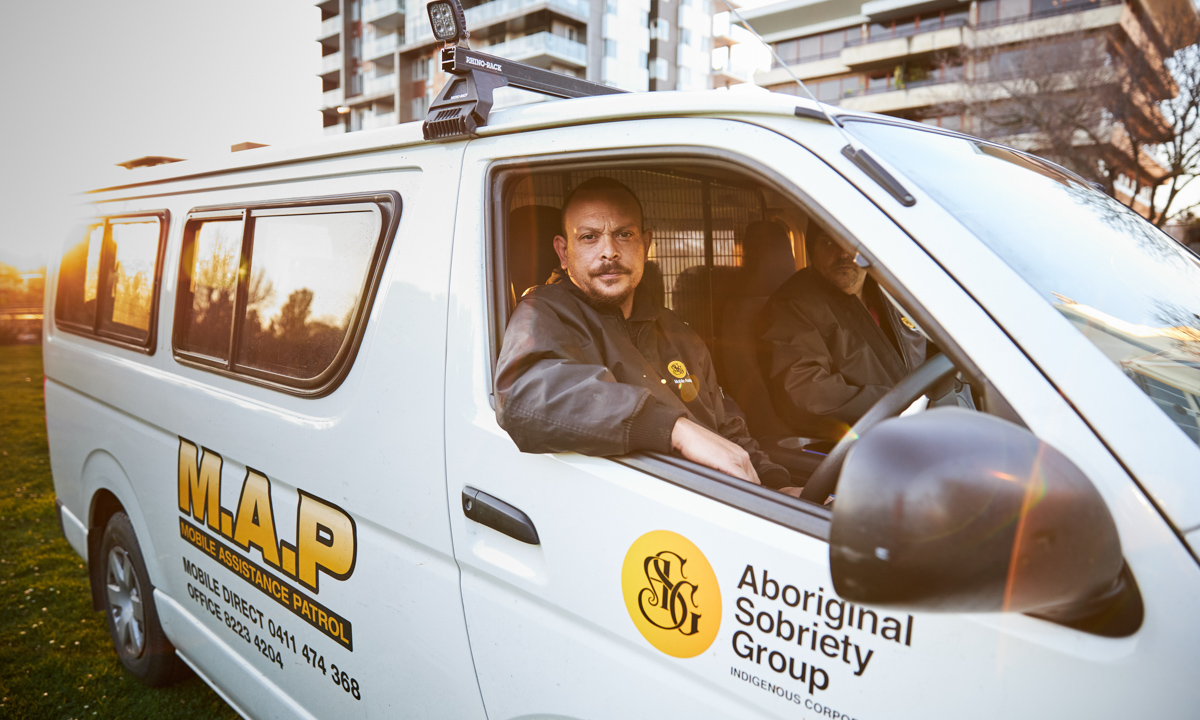 Barry Rigney in the MAP Mobile. This image: Andre Castellucci

One warm afternoon, we meet Narungga and Kaurna Elder Uncle Jeffrey Newchurch in Mukata Hindmarsh Square. The pleasant weather has brought a crowd of white-collar office workers down onto the grass, sunning themselves on their lunch breaks. We want to get Jeffrey’s take on how different communities use the park lands.

As chair of the Kaurna Yerta Aboriginal Corporation (KYAC) – the Native Title holders of the Tartanya Adelaide Plains – Jeffrey sees irony in the scene around us.

“In the park lands you’ve got the private schools, the different clubs, and even the horses have their own spot – as well as the dogs,” Jeffrey says.

“We want to know, how do we have that place of belonging for Kaurna?”

The Adelaide Park Lands Act 2005 is key to understanding the Adelaide City Council and State Government’s attitude towards managing, preserving and promoting the green belt encircling the CBD and North Adelaide.

The Act decrees the park lands are for “the people of South Australia” – but certain uses may “restrict” or “prevent access”.

Jeffrey says before colonisation, Tarntanyangga Victoria Square, another green space that now falls under the Act’s purview, was a camping ground and business place for Kaurna people, who have lived on this soil for at least the last 50,000 years. South Terrace, too, which borders several parks, had its own significance. It was dotted with trees known to be “birthing rite spaces”.

The Act does not prevent Jeffrey and his community from using the park lands, but he is disappointed KYAC is not invited to the table whenever usage of land is discussed. 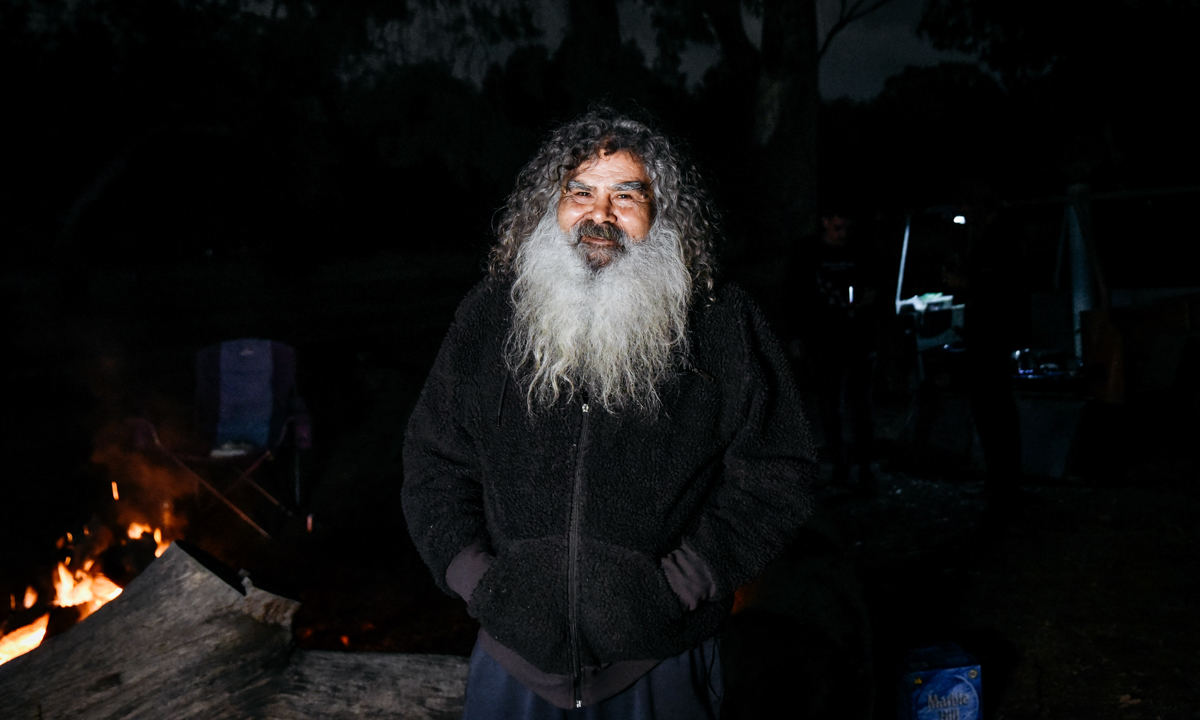 One such development Jeffrey would have liked to have been consulted on is the introduction of alcohol bans in the park lands.

South Australian law does not allow a person to consume alcohol in the city streets or squares at any time, except where a liquor licence has been approved.

Since 2014, alcohol consumption in the Adelaide Park Lands is only permitted between 11am and 8pm. In 2019, a 24/7 alcohol ban was introduced in two southern parks, Kurangga Blue Gum Park and Walyu Yarta Veale Gardens, on a one-year trial basis.

(For a full rundown of how the park lands booze ban has evolved over the years, scroll to the bottom of this article.)

“The policy discriminates against us,” Jeffrey says. “It was clearly designed and created for Aboriginal people getting drunk on park lands or in public areas.

“They’re not working, those dry zone areas. It causes more policing around compliance. Your compliance and your policing doesn’t allow us to have a position of control.”

On the same day CityMag spoke with Jeffrey on Mukata Hindmarsh Square, South Australia’s Attorney-General, Vickie Chapman, quietly gazetted the transition of the two parks’ 24-hour booze-ban from trial into policy. The consumption of alcohol in these parks is now prohibited until December 2023.

When asked what informed the decision to extend the ban, a spokesperson for the Attorney-General said “the decision was to maintain the status quo”.

Both Jeffrey and Barry believe a safe space for First Nations people to gather and consume alcohol could prevent individuals being fined up to $1250.

“With anti-social behaviour happening around playgrounds, the ban should be there, but then it’s got to be managed in a way where it doesn’t affect other people as well,” Barry says.

In her stately Town Hall office, Lord Mayor Sandy Verschoor pushes against Jeffrey’s concerns that the park lands’ dry zones discriminate against Aboriginal people. She says Indigenous people aren’t the only ones affected by the laws.

“[The policy] was always meant to look at those areas which were very close to children’s playgrounds and schools, and to make sure that we could maintain and look after some of the behaviour,” the Lord Mayor says, adding “there’s a reason it was a trial.”

When we ask about the results of the trial, she says she doesn’t have them, which is a refrain we’ve heard from several governmental spokespeople already.

It was later revealed to CityMag the City of Adelaide allegedly applied for the dry zone extension in early July – months before our chat with the Lord Mayor.

(When we originally interviewed her about who the park lands are for, she said she didn’t have the results of the booze ban trial, saying she “wasn’t briefed”.) 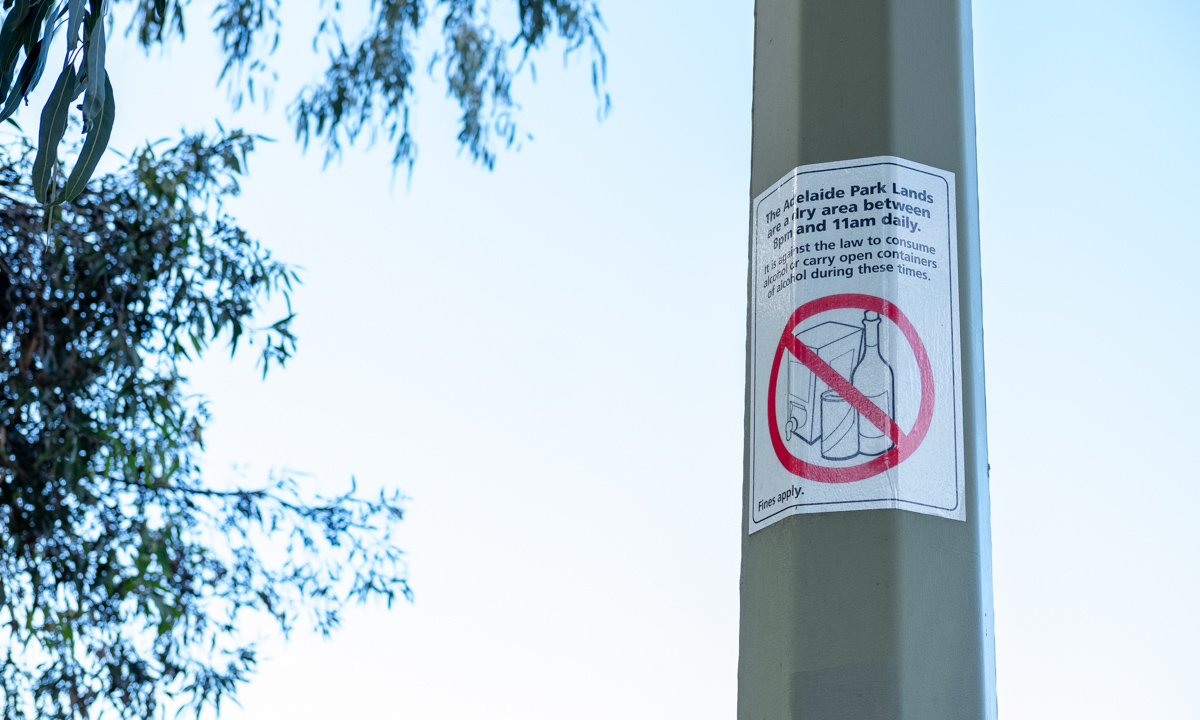 The list of entities active in the park lands is long. There are roughly 16 clubs and associations with ongoing leases, a further 33 have subleases, with eight educational institutions, 30 personal trainers, three cycling organisations, many cricket and soccer groups, and about 800 events making use of the green space.

Add to this “all the cultural stuff” that goes on in the park lands, the Lord Mayor says, such as the Kids on Country school programs, hosted by Kaurna people, cultural tours and the fire-stick farming trial.

Graphic designer Tessa King is one of the many amateur athletes who regularly uses the Adelaide Park Lands. Since 2012, her team, the Pembroke Old Scholars Girls Soccer Club, has trained on a grassy pitch in Tuthangga Carriageway Park in the green belt’s south-eastern corner.

When the State Government initially made noise about the proposed 24-hour dry zone trial two parks over from Tuthangga, Tessa remembers thinking of it as an “attempt to indirectly control minority groups”.

If the dry zone was stretched to Tuthangga (or if a trial was introduced and then extended as if it were the status quo), it “would affect things like barbecues or the social dates that we have,” Tessa says, which “sometimes include alcohol and sometimes don’t.”

Rohan Freegrade is CEO of welfare assistance organisation Lutheran Care and is the spokesperson for the State Government’s recently established homelessness taskforce, Toward Home Alliance. Rohan says it is “relatively common” for rough sleepers to seek shelter and safety in the park lands, and while many Aboriginal people live or visit Adelaide, many don’t sleep in the parks. Some simply choose to spend time there with their community.

“The Adelaide park lands have long been an important cultural corridor, which Aboriginal people have travelled and connected through,” he says.

Back on the grass in Mukata Hindmarsh Square, we ask Jeffrey who he thinks the park lands should be for. “Everyone,” is his response.

As a representative of the Native Title group with a 50,000-year-old tie to the Tartanya Adelaide Plains, including what we now call the Adelaide Park Lands, he’s inviting everyone onto the grass.

“The park lands gives you safety for Aboriginal people,” he says.

29 October 2001
The State Government rolls out a 12-month 24-hour dry zone “trial”, making it an offence to consume alcohol in Adelaide’s squares and streets.

28 October 2002
The State Government and the Adelaide City Council approve a 12-month extension of the initial dry zone trial, despite an evaluation of the trial reporting “inconclusive” findings.

17 October 2003
The State Government and Adelaide City Council requests another 12-month extension. In a document, the government acknowledges prior to the ban taking effect, it was known the Aboriginal community would be impacted.

6 October 2004
The State Government suggests exploring three options for the dry zones: lift the declaration, extend it for two years, or declare the area as dry but suspend it for a trial period. According to a government document, an overall reduction in alcohol-related incidents is reported following the dry-zone roll out, but alcohol-related offending continues to be an issue.

29 October 2004
Another 24-month extension on the city-wide dry zones comes into effect.

1 February 2006
The State Government’s Adelaide Park Lands Act – the document which defines how the park lands should be managed – becomes law.

22 December 2014
A three-month “trial” banning the consumption of alcohol in all of Adelaide’s park lands between 8pm and 11am commences.

February 2015
A City of Adelaide interim report finds 86 per cent of individuals surveyed support dry zones; 37 per cent of respondents perceived a positive impact on anti-social behaviour, while 45 per cent were undecided.

10 December 2019
Adelaide City Council requests the consumption of alcohol to be banned in the Adelaide Park Lands at all times. Attorney-General Vickie Chapman says the idea is “unworkable” and the pitch sinks.

20 December 2019
The Attorney-General receives reports of “an increase in anti-social behaviour in Parks 20 and 21”. A 12-month 24-hour alcohol ban trial is introduced in Kurangga Blue Gum Park and Walyu Yarta Veale Gardens.

20 March 2020
The ban on the consumption and possession of alcohol in Kurangga Blue Gum Park and Walyu Yarta Veale Gardens is extended for a month.

19 August 2021
Attorney-General Vickie Chapman approves the extension of all existing alcohol bans in the city until 22 September 2023, without providing details on any evaluation of the trial.