With the city council's customer centre closed, postal voting is the only option for the supplementary election, with voters urged to submit ballots today to ensure all votes are received by close of polling on Monday. Some candidates fear this may affect the results.

The supplementary City Council election called to replace Robert Simms, who left his area councillor seat in March this year to pursue a career in state politics, has been disrupted by the South Australian lockdown.

The seven candidates were revealed in June, and they each had until 12pm noon Monday, 26 July, when polls would close, to convince voters to cast a ballot in their favour.

Due to the recent COVID-19 cluster and subsequent state-wide lockdown, the methods of casting a vote have been reduced, and Lord Mayor Sandy Verschoor has asked that voters submit their ballots as quickly as possible.

“Due to the lockdown, it’s important to please return your ballot for the City of Adelaide supplementary election TODAY,” the Lord Mayor said via email.

“Our Customer Centre is closed and we need to ensure posted ballots reach the Electoral Commission in time, so please post your ballot papers back using your reply paid envelope provided.”

Prior to the lockdown, voters had the option of returning their ballots via return-post or submitting it in-person at the Pirie Street City of Adelaide customer centre.

In order to ensure votes are received by the Monday deadline, voters are being encouraged to submit their postal vote by Thursday at the latest.

Ninety per cent [of un-returned votes] can change the result of the election.
—Shahin Sayyar Dashti

Candidate Keiran Snape is “concerned” many votes will now not be counted.

He says he is aware of some individuals waiting to get their ballots re-sent to them from the SA Electoral Commission, and he fears they will now “miss out”.

“There’s no way that they can get ballots to them and then return it in time now,” he tells CityMag.

“I would prefer if we changed our system to match that of the East Coast, so have a polling day rather than mail-out.

“Mail-out optional, still, but a polling day would be much better in the future.”

An SA Electoral Commission spokesperson tells CityMag they encourage all eligible voters to get their packs in the post as soon as possible, to ensure the best opportunity for their ballots to be received by Monday.

“Postal elections already provide safeguards against those concerns regarding the conduct of elections during a pandemic, given they require no attendance in-person and offer a period of up to three weeks in which a voter may complete and return their vote,” they say.

“A number of states and territories have, during the current COVID-19 pandemic, conducted compulsory attendance elections with postal voting being one of the ‘fall-back’ measures to ensure the safety of the community.”

The spokesperson says current legislation does not support online voting as an option.

“I think it will have a negative impact on voting,” he tells CityMag.

“The lockdown is probably going to restrict people going to post offices or even letterboxes.”

According to the latest directions, people can leave their house for essential services, which includes visiting the post office.

According to recent data collected by the SA Electoral Commission, as of last count on Tuesday, 20 July, only 11.45 per cent of total electors had cast a vote.

From a total of 27,964 eligible voters, this represents 3202 votes in the supplementary election. 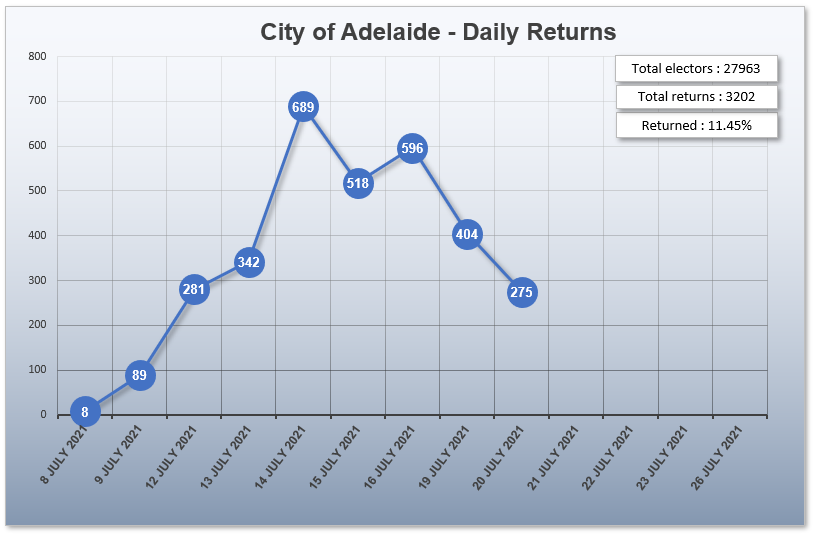 “I was always told that the return ballot procedure was going to be really low and it doesn’t shock me, those stats,” Bookless-Pratz says.

“People who were on the ball, eager and so forth, would have already voted.”

Candidate Shahin Sayyar Dashti says the disturbance will “definitely affect the results” – and goes so far as to say it undermines the democratic voting process.

“Ninety per cent [of un-returned votes] can change the result of the election,” he says.

On the other hand, candidate Theo Vlassis says he’s not worried, saying there was already ample time before this latest announcement.

“I don’t think there will be a big impact at all,” he says.

“The council still should go on and the winner should be acknowledged, whoever that winner is.”

Handing out trophies and hugs at the Onkaparinga Business Awards